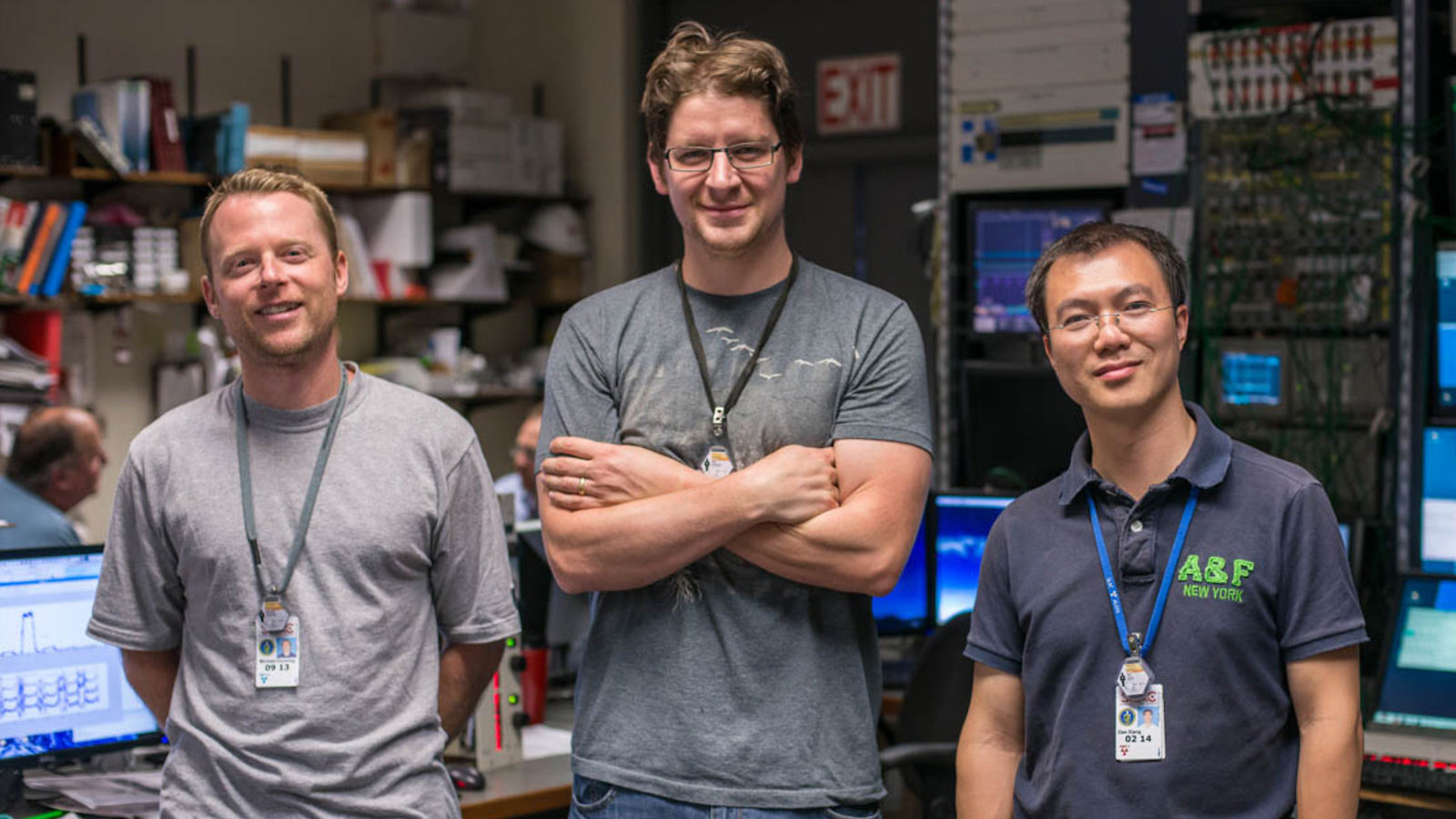 Accelerator researchers at SLAC's Next Linear Collider Test Accelerator have successfully created high-quality, fast-moving electron beams in a new type of particle acceleration that uses an off-the-shelf laser to give electron bunches a boost.

If it can be scaled up, the new technique is capable of reducing the size and expense of future accelerators. That, combined with the high quality of the accelerated beams, would make the method especially useful for future electron–position colliders or extremely powerful light sources capable of delivering not just X-rays, but gamma rays.

The recent work borrows a page from the laser–electron interaction that takes place in free-electron lasers—machines developed out of particle physics that study the structure of materials in unprecedented detail. In a free-electron laser, accelerated electrons are sent through a series of magnets to make the electrons slalom back and forth, which causes them to generate intense, coherent X-ray light: an X-ray laser. Essentially, the machine makes a laser from accelerated electrons.

The recent advancement takes the free-electron laser process and rewrites it—backward. In Physical Review Letters this month, researchers describe their success at using optical laser pulses to accelerate electrons in two stages in order to obtain a high-quality beam. In short, instead of accelerating electron beams to make lasers, the technique uses lasers to accelerate electron beams.

The idea is not new. For the past four decades, researchers have considered using high-powered lasers to pump energy into electrons. Theoretically, this type of accelerator has the potential to accelerate bunches of electrons 10 times faster in the same distance than conventional microwave technology, which translates to shorter, less expensive accelerators.

What's been holding up the technology, says Dao Xiang, an accelerator physicist at SLAC who conducted the experiment with colleagues Mike Dunning and Erik Hemsing, is the ability to match the length of the electron bunch being accelerated to the wavelength of the laser doing the accelerating. If they aren't well-matched, some of the particles get an energy boost while some get yanked back, resulting in a bunch whose electrons are spread along a range of energies.

But if the bodyboarder were much larger than the average person, he might be too big to catch just the crest of the wave; the front half of his body would catch the crest, while the back half would be stuck in the trough. While for a bodyboarder this might mean that he is pushed neither forward nor backward, for an electron bunch caught between the crest and trough of an electromagnetic wave, this can cause the first half of the bunch to be accelerated while the second half is decelerated.

To avoid this, "you have to make sure the electron bunch is shorter than the accelerating wave,” says Dunning, the lead author on the paper. "You also have to inject the bunch into the accelerator at the proper time" so the electrons don’t miss the crest of the wave.

This is not a problem for conventional accelerators, which use microwaves with fairly long wavelengths compared to the size of the bunches riding the waves: It's easy for the small bunches to catch the large waves. For example, the wavelength of microwaves in SLAC's linear accelerator is more than 100 millimeters, while the electron bunches traveling on the waves are less than 1 millimeter in length.

But optical lasers use light with much shorter wavelengths. Xiang's group used a titanium-sapphire laser with a wavelength of 800 nanometers—hundreds of thousands of times shorter than the waves in SLAC's accelerator.

The solution: The researchers "chopped up" each bunch of electrons before sending them for a ride on the waves. To do this they used another laser of the same wavelength but much lower intensity as a "modulator"—instead of accelerating the electron bunch, it imprinted the bunch with its pattern of waves. This pattern provided the template by which precisely spaced magnets sliced apart the electrons into 200 separate microbunches equally separated at 800 nanometers, which were then accelerated.

"More than half of the electrons saw the same acceleration," says Xiang, a much more efficient result than achieved by previous accelerators that did not use such modulators. With the addition of other components, such as another laser and magnets, researchers “may make nearly 100 percent of the particles see the same acceleration," Hemsing adds.

The final boost: about 200,000 electronvolts. For comparison, the SLAC linear accelerator currently accelerates electrons to about 15 billion electronvolts for the laboratory’s X-ray laser, the Linac Coherent Light Source. So those 200,000 electronvolts are not much, Xiang says, but they are not bad for a proof-of-principle constrained by the available laser.

Even more impressive, the entire experiment was conducted using equipment built for another experiment. Carsten Hast, head of Accelerator Test Facilities—the group that keeps Next Linear Collider Test Accelerator running—says, "They were waiting for additional equipment but wanted to keep working, so we helped them change their setup. They did everything in just two weeks. They were quite resourceful."

Xiang says they hope to recreate the test soon using a terawatt laser currently installed at FACET, SLAC’s Facility for Advanced Accelerator Experimental Tests. With the terawatt laser, the researchers believe they can boost electrons to billions of electronvolts.