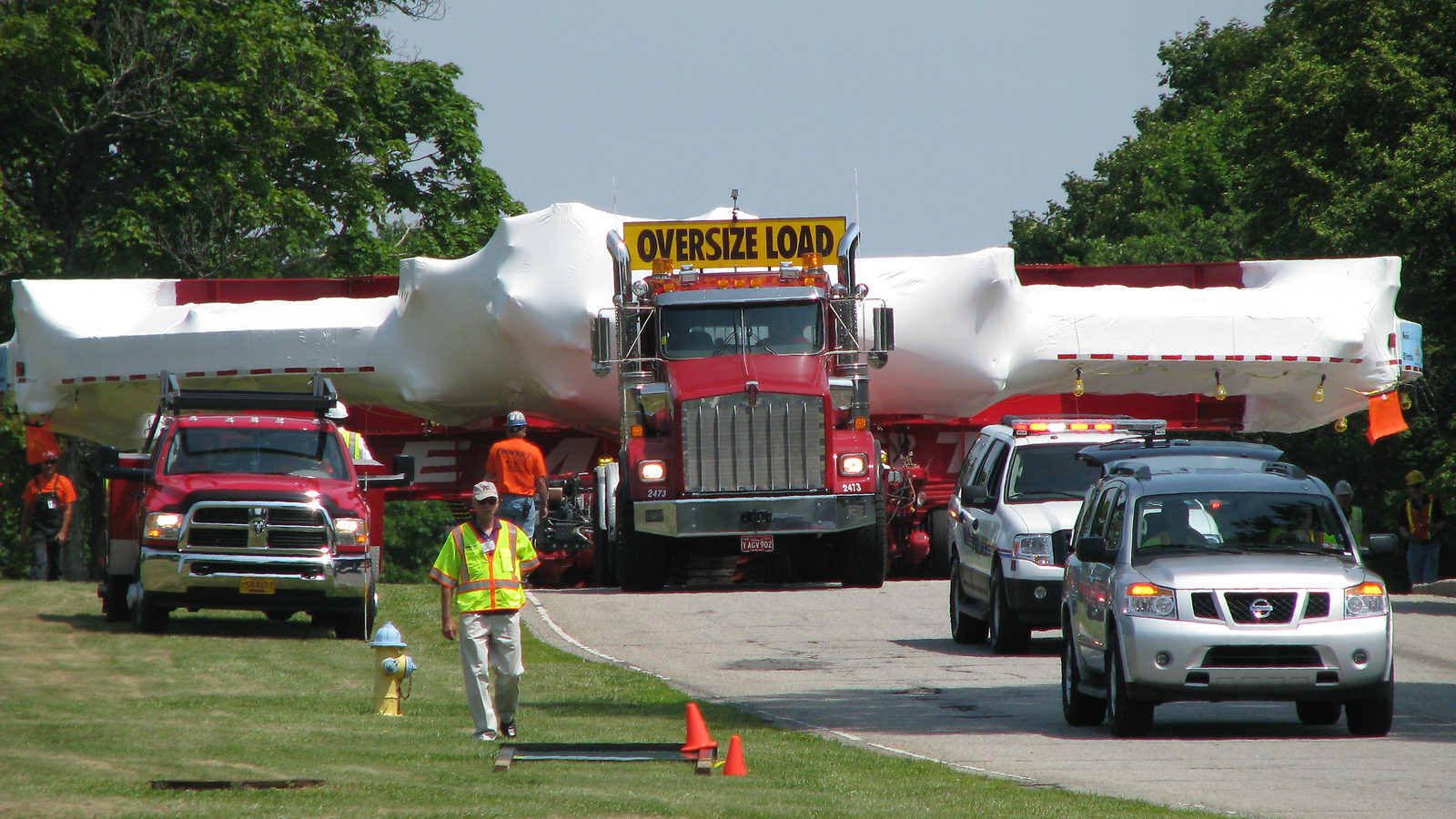 Those words were ringing in my head as I drove around Brookhaven National Laboratory on Long Island for the first time, searching for a massive electromagnet. They were spoken by Justin Eure of the Brookhaven Media and Communications Office, and he seemed pretty sure. But surer men than he had been foiled by my hideous sense of direction.

I needn’t have worried. A few winding turns, and there it was, the reason I’d flown 900 miles and braved two hours of New York traffic. A 17-ton, 50-foot-wide ring of aluminum stuffed with superconducting coils, covered in white shrink wrap, attached to a vast metal stabilizing apparatus and loaded up on the trailer of the biggest truck I’d ever seen. It took me a while to truly fathom how vast it was, how much bigger it was than I had imagined.

This magnet is the centerpiece of Fermilab’s new experiment, called Muon g-2. It will build on a similar experiment conducted in the 1990s here at Brookhaven, which found tantalizing hints that may be due to new physics just beyond our current understanding. The ring will capture and store muons, subatomic particles that live for about two-millionths of a second, and allow scientists to study their magnetic wobble. If that wobble differs from theoretical predictions, it could point to the existence of undiscovered particles. At Brookhaven, the Muon g-2 experiment found hints that it could be so.

I’m fond of saying that particle physicists build very big things to study very small things. This electromagnet is a very big thing. And, improbably, I was there to see it move, to begin a 3200-mile land and sea journey from Long Island to the Chicago suburbs. This trip is the product of years of planning by an international collaboration and the result of cooperation between two national laboratories. I was just there to watch, but I felt caught up in the excitement anyway.

Moments after I ambled out of my rental car, Justin joined me, and we spent a few minutes just staring up at the ring, mouths agape.

Big is one thing, but big and fragile is another altogether. This ring is both, and if it twists beyond a certain tolerance, the coils inside may come loose, ruining the entire thing. I certainly could not have imagined a way to bring it safely from New York to Illinois without first inventing a Star-Trek-style transporter.

Thankfully, the Muon g-2 team and their chosen contractor, Emmert International, could. Emmert is an Oregon company that specializes in safely moving big, heavy things over long distances. The system they devised to move the ring is as much a marvel as the electromagnet itself. I’d seen photos and scale models of it, but none of that prepared me to see the thing in motion.

Saturday morning, the ring completed the first leg of its journey, traversing the 3 miles or so from its former resting place to the main gate of Brookhaven National Laboratory. They went slowly, starting around 9 a.m., flanked by Brookhaven Police cars and a tree-trimming crew, clipping branches so the ring could pass by safely.

The weather was gorgeous, a far cry from the previous week, when prep work for the move had to be halted due to torrential storms.

I’d gathered with several reporters and onlookers by the side of Upton Road, ready to watch the ring pass by. In the meantime, Fermilab and Brookhaven scientists chatted with people, answering questions. One of the most common was, “Why are we doing this at all?”

The answer actually makes perfect sense. Brookhaven has the perfect machine to study muons. Fermilab has the most intense beam of those muons in the world, capable of closing that margin of error from the Brookhaven experiment.

It would cost Fermilab about $30 million to build a new ring, but moving the existing one from New York to Illinois costs only about $3 million.

All talking stopped when the ring trundled by, at only a few miles per hour. The silence was filled with clicking cameras and audible gasps. While the magnet certainly looked large sitting in a parking lot, it wasn’t until it started rolling down streets that I got the sense of how truly massive it was. It hung over the sides of the road, dwarfing the cars in front of it.

After three hours of slow and careful progress, the electromagnet was safely staged by Brookhaven’s main gate around noon. You could hear the sighs of relief and feel the excitement over the next day’s journey, which would see the ring leave the Brookhaven site for the first time.

Tom Petty was right. The waiting is the hardest part.

After the thrill of watching the Muon g-2 ring move on Saturday, we waited… and waited… and waited until just before midnight tonight to see it move again. This time, it left the relative safety of the laboratory and headed down the William Floyd Parkway, one of the busiest roads in Long Island, to the Smith Point Marina.

The 10-mile trip was expected to take six hours. The Emmert team finished it in two hours and 15 minutes, wrapping things up by about 3 a.m. on Monday. As you might have guessed, there were high fives and big smiles all around.

The early-morning effort was very well coordinated. Before the caravan moved through, crews used a front-loader to carefully remove dozens of road signs that would have been in the way of the transport. (A second team replaced them once the ring had passed through.) The entire shipping structure on the trailer was 14 feet high, so a truck with a long vertical pole drove the route ahead of the ring, making sure it would slip under traffic lights.

The actual caravan included more than a dozen county and state police vehicles, lights flashing. All along the route, fascinated bystanders gathered to watch the ring roll by. I joined the Brookhaven public affairs team, ducking down back streets to get ahead of the ring and talking to as many people as we could.

Several of the onlookers were science enthusiasts, thrilled to see something so complex and fascinating up close. Some were taken by surprise and watched the ring go by in open-mouthed astonishment. And many were convinced Brookhaven scientists were using the cover of darkness to transport a UFO.

For decades, there has apparently been a persistent rumor that scientists at Brookhaven once responded to a UFO landing and have been secretly housing an alien spacecraft. The Muon g-2 ring, wrapped in white and covered in flashing lights, did nothing to dissuade these rumors.

For others, though, just seeing beautifully engineered science going by at 10 miles an hour was enough.

“That’s just incredible,” one man whistled, as the ring sailed by.

After a break of just nine hours, the team was back at it on Monday, hoping to get the ring onto the waiting barge to set sail on Tuesday. The tool of the day: a crane that looked as tall as the Empire State Building.

With typical precision, crews attached the crane to the shipping apparatus holding the ring in place. (According to the experiment’s lead engineer, Del Allspach, the ring and the apparatus together weigh about 50 tons.) Scientists, engineers and onlookers assembled at Smith Point Marina held their breath as the electromagnet was lifted into the air and pivoted over the barge.

And in minutes, it was over, the ring safely in place and attached to three metal pylons, ready for its sea voyage. The barge will now head south around the tip of Florida, then up a series of rivers to a port in Lemont, Illinois, where another crane will lift it and place it back on the truck. It will then be driven to Fermilab over at least two consecutive nights.

But that’s weeks from now. (Between four and six, according to the project team.) Right now, we’re all enjoying the afterglow of a job well done, a first step well taken.