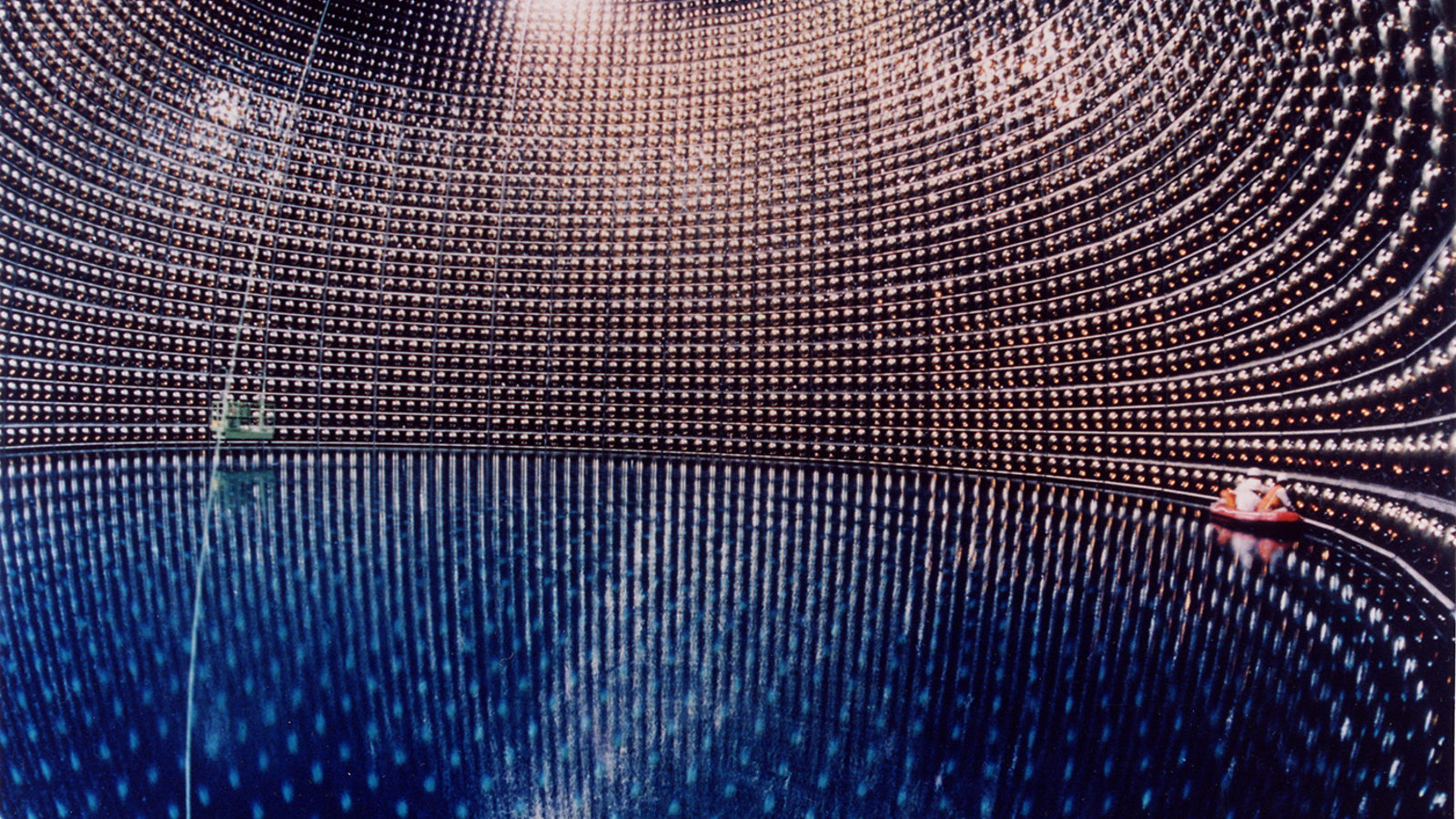 Super-Kamiokande, buried under about 1 kilometer of mountain rock in Kamioka, Japan, is one of the largest neutrino detectors on Earth. Its tank is full of 50,000 tons (about 13 million gallons) of ultrapure water, which it uses to search for signs of notoriously difficult-to-catch particles.

Recently members of the Super-K collaboration gave the go-ahead to a plan to make the detector a thousand times more sensitive with the help of a chemical compound called gadolinium sulfate.

Neutrinos are made in a variety of natural processes. They are also produced in nuclear reactors, and scientists can create beams of neutrinos in particle accelerators. These particles are electrically neutral, have little mass and interact only weakly with matter—characteristics that make them extremely difficult to detect even though trillions fly through any given detector each second.

Super-K catches about 30 neutrinos that interact with the hydrogen and oxygen in the water molecules in its tank each day. It keeps its water ultrapure with a filtration system that removes bacteria, ions and gases.

Scientists take extra precautions both to keep the ultrapure water clean and to avoid contact with the highly corrosive substance.

“Somebody once dropped a hammer into the tank,” says experimentalist Mark Vagins of the University of Tokyo's Kavli Institute for the Physics and Mathematics of the Universe. “It was chrome-plated to look nice and shiny. Eventually we found the chrome and not the hammer.”

When a neutrino interacts in the Super-K detector, it creates other particles that travel through the water faster than the speed of light, creating a blue flash. The tank is lined with about 13,000 phototube detectors that can see the light.

On average, several massive stars explode as supernovae every second somewhere in the universe. If theory is correct, all supernovae to have exploded throughout the universe’s 13.8 billion years have thrown out trillions upon trillions of neutrinos. That means the cosmos would glow in a faint background of relic neutrinos—if scientists could just find a way to see even a fraction of those ghostlike particles.

For about half of the year, the Super-K detector is used in the T2K experiment, which produces a beam of neutrinos in Tokai, Japan, some 183 miles (295 kilometers) away, and aims it at Super-K. During the trip to the detector, some of the neutrinos change from one type of neutrino to another. T2K studies that change, which could give scientists hints as to why our universe holds so much more matter than antimatter.

But a T2K beam doesn’t run continuously during that half year. Instead, researchers send a beam pulse every few seconds, and each pulse lasts just a few microseconds long. Super-K still detects neutrinos from natural processes while scientists are running T2K.

In 2002, at a neutrino meeting in Munich, Germany, experimentalist Vagins and theorist John Beacom of The Ohio State University began thinking of how they could better use Super-K to spy the universe’s relic supernova neutrinos.

“For at least a few hours we were standing there in the Munich subway station somewhere deep underground, hatching our underground plans,” Beacom says.

To pick out the few signals that come from neutrino events, you have to battle a constant clatter of background noise of other particles. Other incoming cosmic particles such as muons (the electron’s heavier cousin) or even electrons emitted from naturally occurring radioactive substances in rock can produce signals that look like the ones scientists hope to find from neutrinos. No one wants to claim a discovery that later turns out to be a signal from a nearby rock.

Super-K already guards against some of this background noise by being buried underground. But some unwanted particles can get through, and so scientists need ways to separate the signals they want from deceiving background signals.

Vagins and Beacom settled on an idea—and a name for the next stage of the experiment:  Gadolinium Antineutrino Detector Zealously Outperforming Old Kamiokande, Super! (GADZOOKS!). They proposed to add 100 tons of the compound gadolinium sulfate—Gd2(SO4)3—to Super-K’s ultrapure water.

When a neutrino interacts with a molecule, it releases a charged lepton (a muon, electron, tau or one of their antiparticles) along with a neutron. Neutrons are thousands of times more likely to interact with the gadolinium sulfate than with another water molecule. So when a neutrino traverses Super-K and interacts with a molecule, its muon, electron, or antiparticle (Super-K can’t see tau particles) will generate a first pulse of light, and the neutron will create a second pulse of light: “two pulses, like a knock-knock,” Beacom says.

By contrast, a background muon or electron will make only one light pulse.

To extract only the neutrino interactions, scientists will use GADZOOKS! to focus on the two-signal events and throw out the single-signal events, reducing the background noise considerably.

But you can’t just add 100 tons of a chemical compound to a huge detector without doing some tests first. So Vagins and colleagues built a scaled-down version, which they called Evaluating Gadolinium’s Action on Detector Systems (EGADS). At 0.4 percent the size of Super-K, it uses 240 of the same phototubes and 200 tons (52,000 gallons) of ultrapure water.

Over the past several years, Vagins’ team has worked extensively to show the benefits of their idea. One aspect of their efforts has been to build a filtration system that removes everything from the ultrapure water except for the gadolinium sulfate. They presented their results at a collaboration meeting in late June.

On June 27, the Super-K team officially approved the proposal to add gadolinium sulfate but renamed the project SuperK-Gd. The next steps are to drain Super-K to check for leaks and fix them, replace any burned out phototubes, and then refill the tank.

But this process must be coordinated with T2K, says Masayuki Nakahata, the Super-K collaboration spokesperson.

Once the tank is refilled with ultrapure water, scientists will add in the 100 tons of gadolinium sulfate. Once the compound is added, the current filtration system could remove it any time researchers would like, Vagins says.

“But I believe that once we get this into Super-K and we see the power of it, it’s going to become indispensable,” he says. “It’s going to be the kind of thing that people wouldn’t want to give up the extra physics once they’re used to it.”