Something goes bump in the data

The CMS and ATLAS experiments at the LHC see something mysterious, but it’s too soon to pop the Champagne. 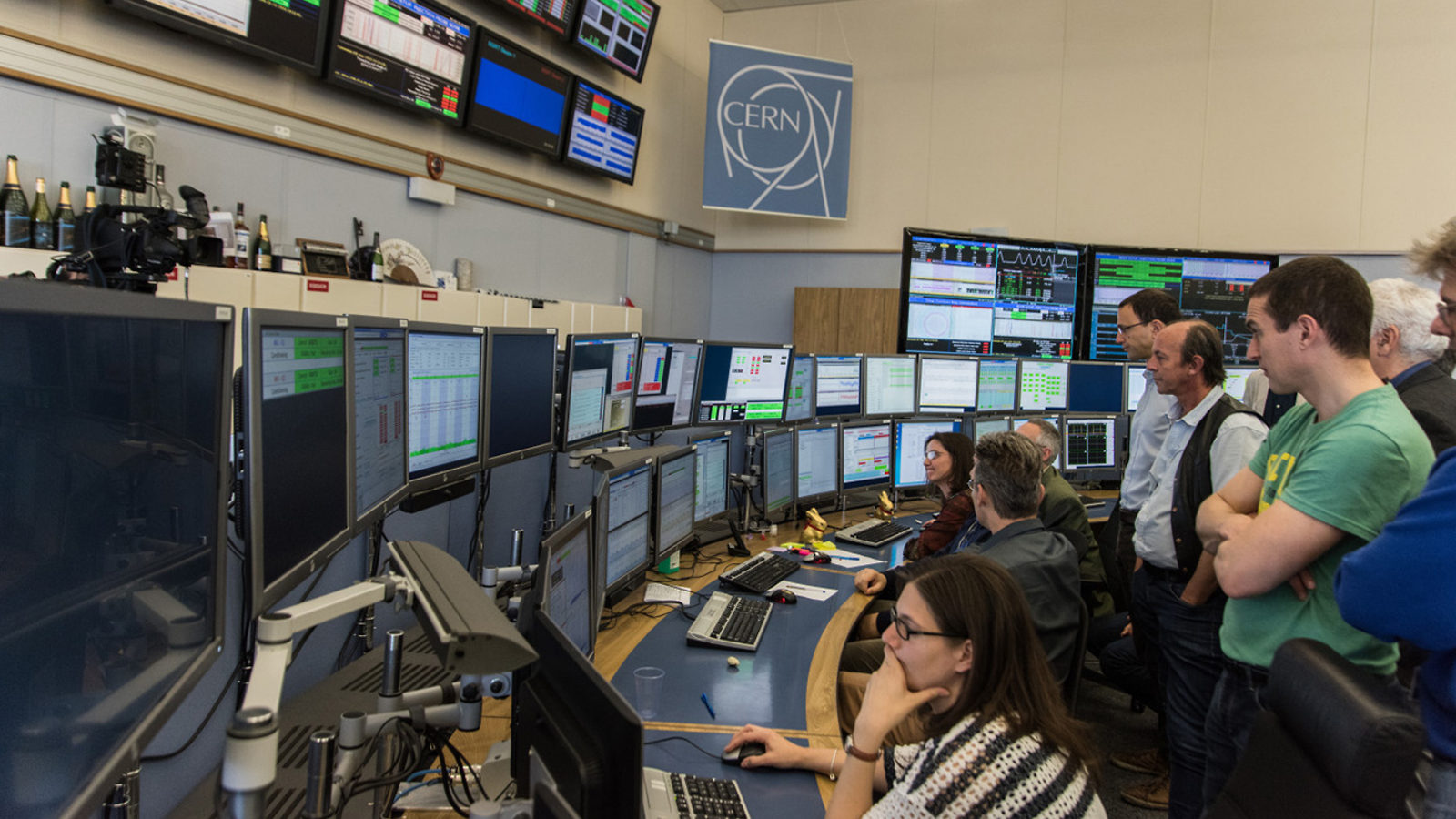 An unexpected bump in data gathered during the first run of the Large Hadron Collider is stirring the curiosity of scientists on the two general-purpose LHC experiments, ATLAS and CMS.

CMS scientists first published this bump in 2014. But because it was compatible with being a statistical fluke, they made no claim that they had observed a new particle. Recently ATLAS confirmed that they also see a bump in roughly the same place, and this time it’s bigger and stronger.

“Both ATLAS and CMS are developing new search techniques that are greatly improving our ability to search for new particles,” says Ayana Arce, an assistant professor of physics at Duke University. “We can look for new physics in ways we couldn’t before.”

Unlike the pronounced peak that recently led to the discovery of pentaquarks, these two studies are in their nascent stages. And scientists aren’t quite sure what they’re seeing yet… or if they’re seeing anything at all.

If this bump matures into a sharp peak during the second run of the LHC, it could indicate the existence of a new heavy particle with 2000 times the mass of a proton. The discovery of a new and unpredicted particle would revolutionize our understanding of the laws of nature. But first, scientists have to rule out false leads.

“It’s like trying to pick up a radio station,” says theoretical physicist Bogdan Dobrescu of Fermi National Accelerator Laboratory who co-authored a paper on the bump in CMS and ATLAS data. “As you tune the dial, you think you’re beginning to hear voices through the static, but you can’t understand what they’re saying, so you keep tuning until you hear a clear voice.”

On the heels of the Higgs boson discovery in the first run of the LHC, scientists must navigate a tricky environment where people are hungry for new results while relying on data that is slow to gather and laborious to interpret.

The data physicists are analyzing are particle decay patterns around 2 TeV, or 2000 GeV.

“We can’t see short-lived particles directly, but we can reconstruct their mass based on what they transform into during their decay,” says Jim Olsen, a professor of physics at Princeton University. “For instance, we found the Higgs boson because we saw more pairs of W bosons, Z bosons and photons at 125 GeV than our background models predicted.”

Considering that the heaviest particle of the Standard Model, the top quark, has a mass of 173 GeV, if this bump is real and not a fluctuation, it indicates a significantly heavier particle than those covered in the Standard Model.

While the theories being batted around at this early stage disagree on the particulars, most agree that, so far, this data bump best fits the properties of an extended Standard Model gauge boson.

The gauge bosons are the force-carrying particles that enable matter particles to interact with each other. The heaviest bosons are the W and Z bosons, which carry the weak force. An extended Standard Model predicts comparable particles at higher energies, heavier versions known as W prime and Z prime (or W’ and Z’). Several theorists suggest the bump at 2 TeV could be a type of W prime. 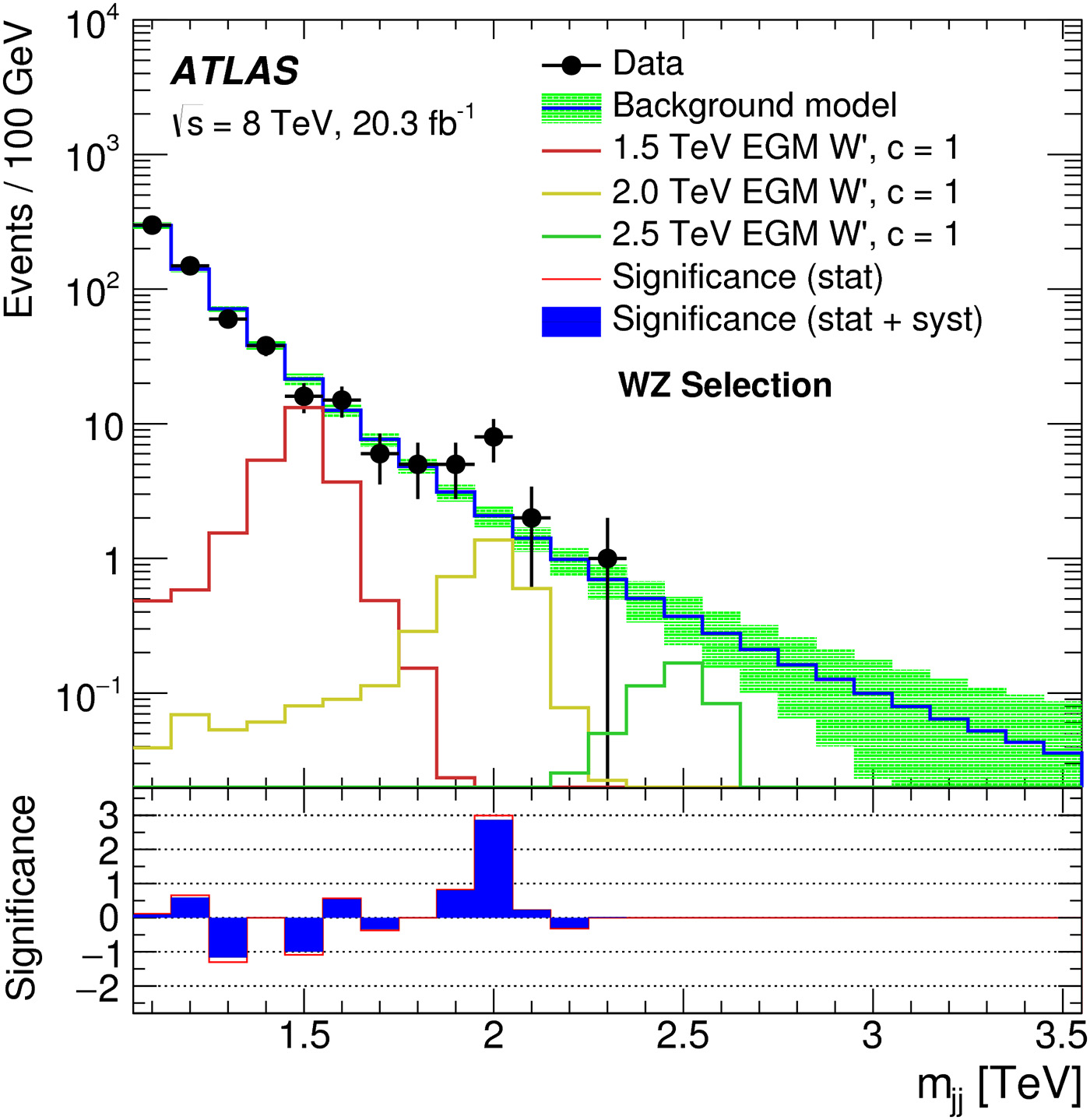 But LHC physicists aren’t practicing their Swedish for the Nobel ceremony yet. Unexpected bumps are common and almost always fizzle out with more data. For instance, in 2003 an international collaboration working on the Belle experiment at the KEK accelerator laboratory in Japan saw an apparent contradiction to the Standard Model’s predictions in the decay patterns of particles containing bottom quarks.

“It was really striking,” says Olsen. “The probability that the signal was due to sheer statistical fluctuation was only about one in 10,000.”

Seven years later, after inundating their analysis with heaps of fresh data, the original contradiction from the Belle experiment withered and died, and from its ashes arose a stronger result that perfectly matched the predictions of the Standard Model.

But scientists also haven’t written off this new bump as a statistical fluctuation. In fact, the closer they look, the more exciting it becomes.

With most anomalies in the data, one experiment will see it while the other one won’t—a clear indication of a statistical fluctuation. But in this case, both CMS and ATLAS independently reported the same observation. And not only do both experiments see it, they see it at roughly the same energy across several different types of analyses.

“This is kind of like what we saw with the Higgs,” says JoAnne Hewett, a theoretical physicist at SLAC National Accelerator Laboratory who co-authored a paper theorizing the bump could be a type of W prime particle. “The Higgs just started showing up as 2- to 3-sigma bumps in a few different channels in the two different experiments. But there were also false leads with the Higgs.” 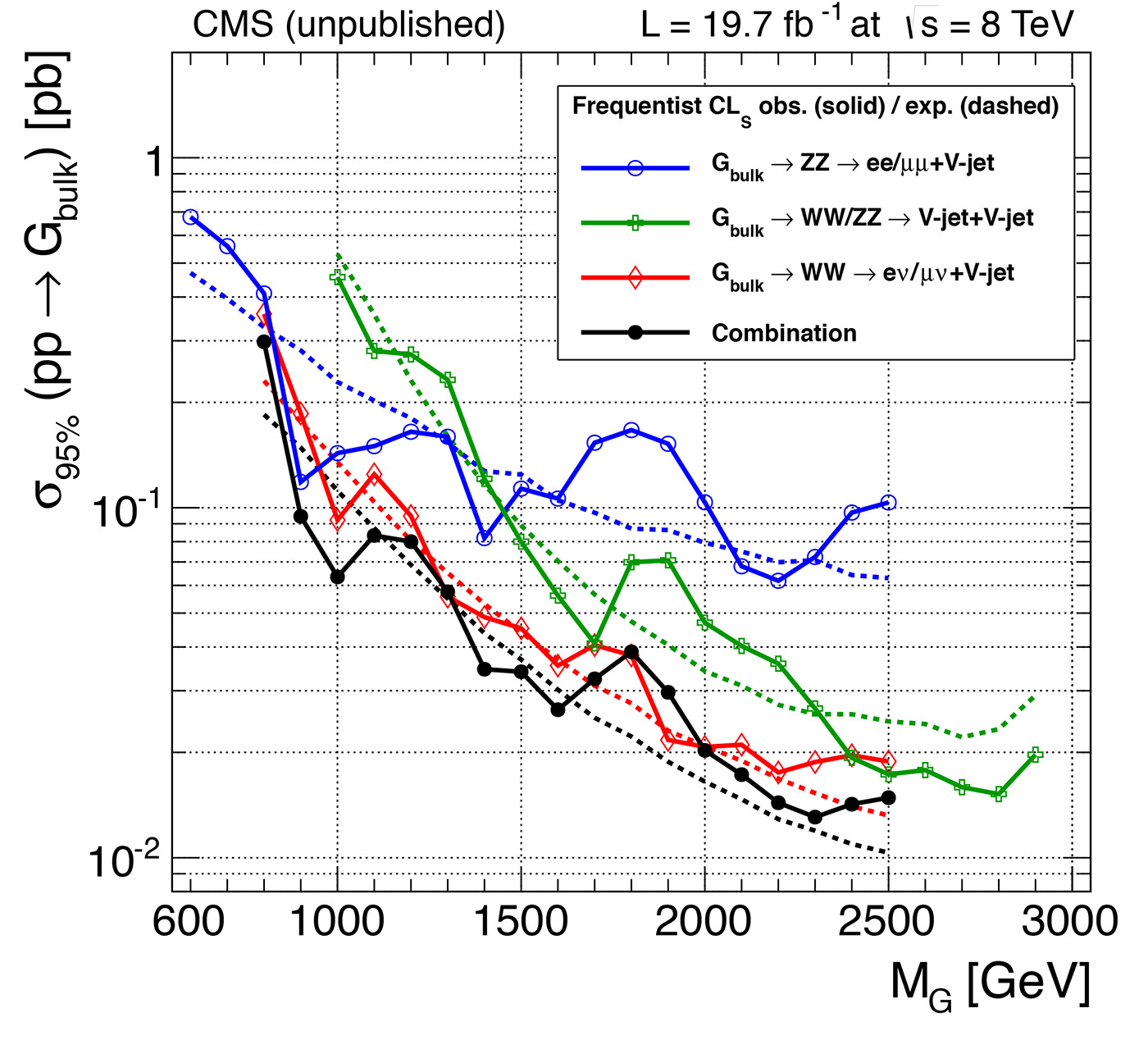 Scientists are seeing more Z boson and W boson pairs popping up at 2 TeV than the Standard Model predicts. But besides this curious excess of events, they haven’t identified any sort of clear pattern.

“Theorists come up with the models that predict the patterns we should see if there is some type of new physics influencing our experimental data,” Olsen says. “So if this bump is new physics, then our models should predict what else we should see.”

Even though this bump is far too small to signify a discovery and presents no predictable pattern, its presence across multiple different analyses from both CMS and ATLAS is intriguing and suspicious. Scientists will have to patiently wait for more data before they can flesh out what it actually is.

The latest results from these two studies will be presented at the European Physical Society conference in Vienna at the end of the month.

The Large Hadron Collider broke its own record again in 13-trillion-electronvolt test collisions.