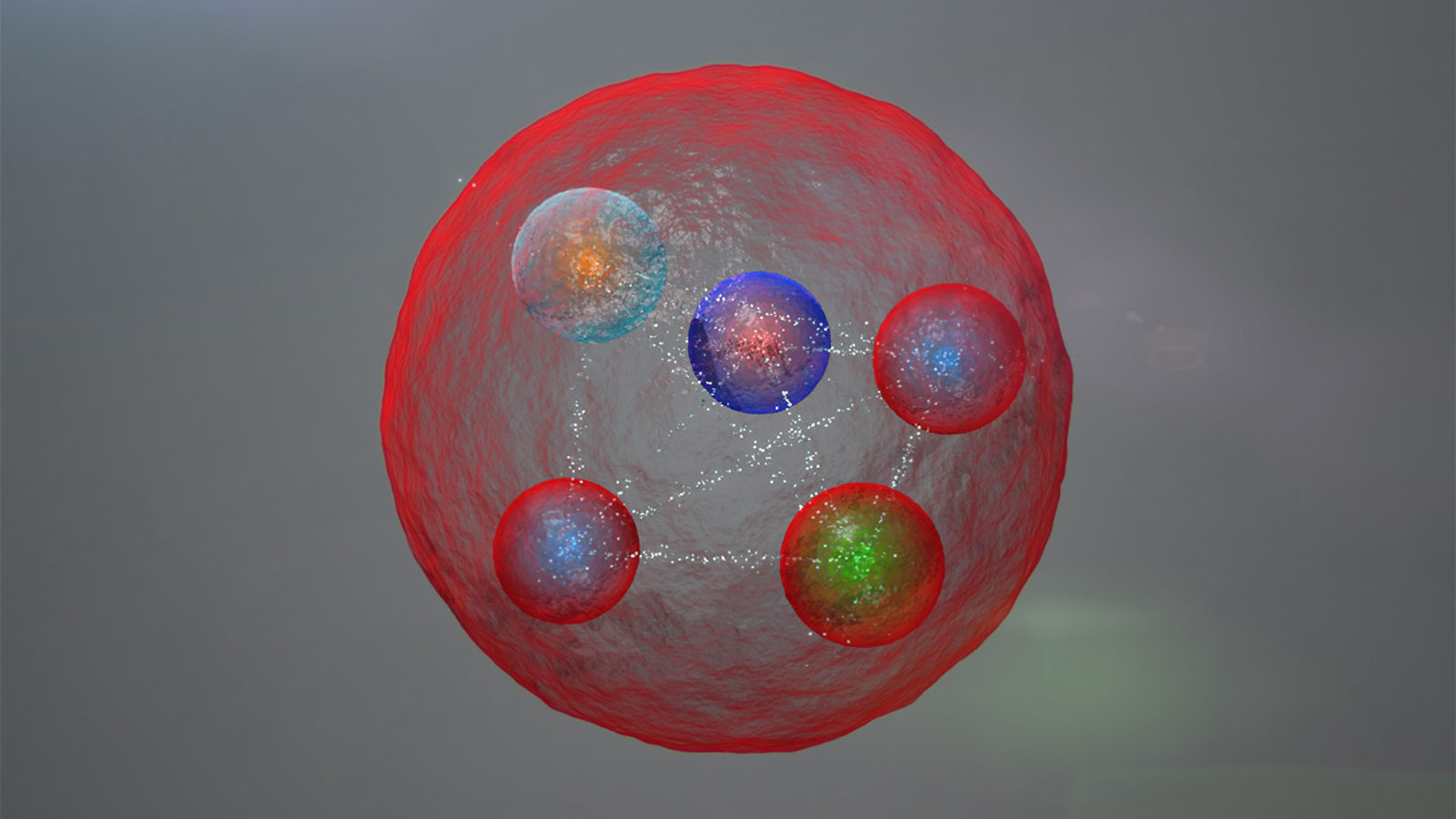 Scientists at the LHCb experiment at the Large Hadron Collider just discovered two particles made up of not three, not four, but five quarks—the first observed pentaquarks. Scientists have been searching for this class of particles for about 50 years.

“The pentaquark is not just any new particle,” says LHCb spokesperson Guy Wilkinson of University of Oxford. “Studying its properties may allow us to understand better how ordinary matter, the protons and neutrons from which we’re all made, is constituted.”

Quarks were first theorized in 1964 by physicists Murray Gell-Mann and George Zweig. The two independently proposed that several of the particles thought to be fundamental—unable to be broken down into smaller parts—were actually made up of smaller particles called quarks. Quarks were eventually found to come in six types, called up, down, charm, strange, top and bottom.

Last year, researchers on the LHCb experiment at CERN confirmed the existence of a particle containing four quarks. But until recently, five-quark particles remained elusive.

“Ever since Gell-Mann published his theory, researchers have actively looked for these pentaquarks, but all the previous searches turned out to be false,” says Syracuse University physicist Sheldon Stone. “Since then, the LHCb collaboration has been particularly deliberate in this study.”

In the end, however, researchers on the LHCb experiment found the pentaquark outside of a pentaquark study; they serendipitously stumbled upon it while investigating something completely different.

“We asked a graduate student [Nathan Jurik of Syracuse University] to examine what we thought was an uninteresting and minor source of background events, just in case it happened to be a nasty source of experimental noise,” Stone says. “He did it begrudgingly but came back with a big smile on his face because there was a huge and unexpected signal. We told him to forget about what he was working on and focus on this instead.”

What Jurik had found was a surprising feature of the decay of the Lambda-b particle—a baryon consisting of an up quark, down quark and bottom quark.

“There was a sharp peak in the data that we couldn’t explain,” Stone says. “We kept hoping it would go away, but it never did. No matter what we did we couldn’t get an explanation for why it was there, so we took a closer look and discovered it was this new particle.”

The Lamba-b particle is unstable and quickly deteriorates into three other particles: a J-psi particle (a charm and anti-charm quark bundled together), a proton (two up quarks and a down quark) and a kaon (a strange quark paired with an anti-up quark).

Researchers discovered that sometimes, before the Lambda-b fragments into these byproducts, it transforms into a new particle consisting of five quarks: two up quarks, a down quark, a charm quark and an anti-charm quark.

This newly discovered particle comes in two varieties—one with a spin of 3/2 and the other with a spin of 5/2. Scientists on the LHCb experiment named these two new pentaquarks Pc(4450)+ and Pc(4380)+.

Jurik says this will make for a more interesting PhD thesis.

“At some moments towards the start of this analysis I was feeling disheartened because it was a complicated analysis and it wasn’t clear if it was going to pay off,” he says. “I was not expecting this. It’s kind of amazing—not many physicists can say they helped discover a new state of matter at my age.”

This discovery of a five-quark hadron completes Gell-Mann’s original hypothesis and will enable researchers to study how quarks stick together and form the scaffolding for solid matter.

It will also allow physicists to tune the equations that predict the behavior of all known forms of matter in the universe. This is particularly important for the investigation of new particles and forces.

Thus far LHCb researchers have identified the spin, mass and lifetime of this pentaquark pair, but what they haven’t figured out is how the five quarks bind together.

For Stone, this discovery shows that fundamental physics research still holds many surprises, some of which show up in unexpected places.

“We didn’t go out looking for a pentaquark,” Stone says, “It’s a particle that found us.”