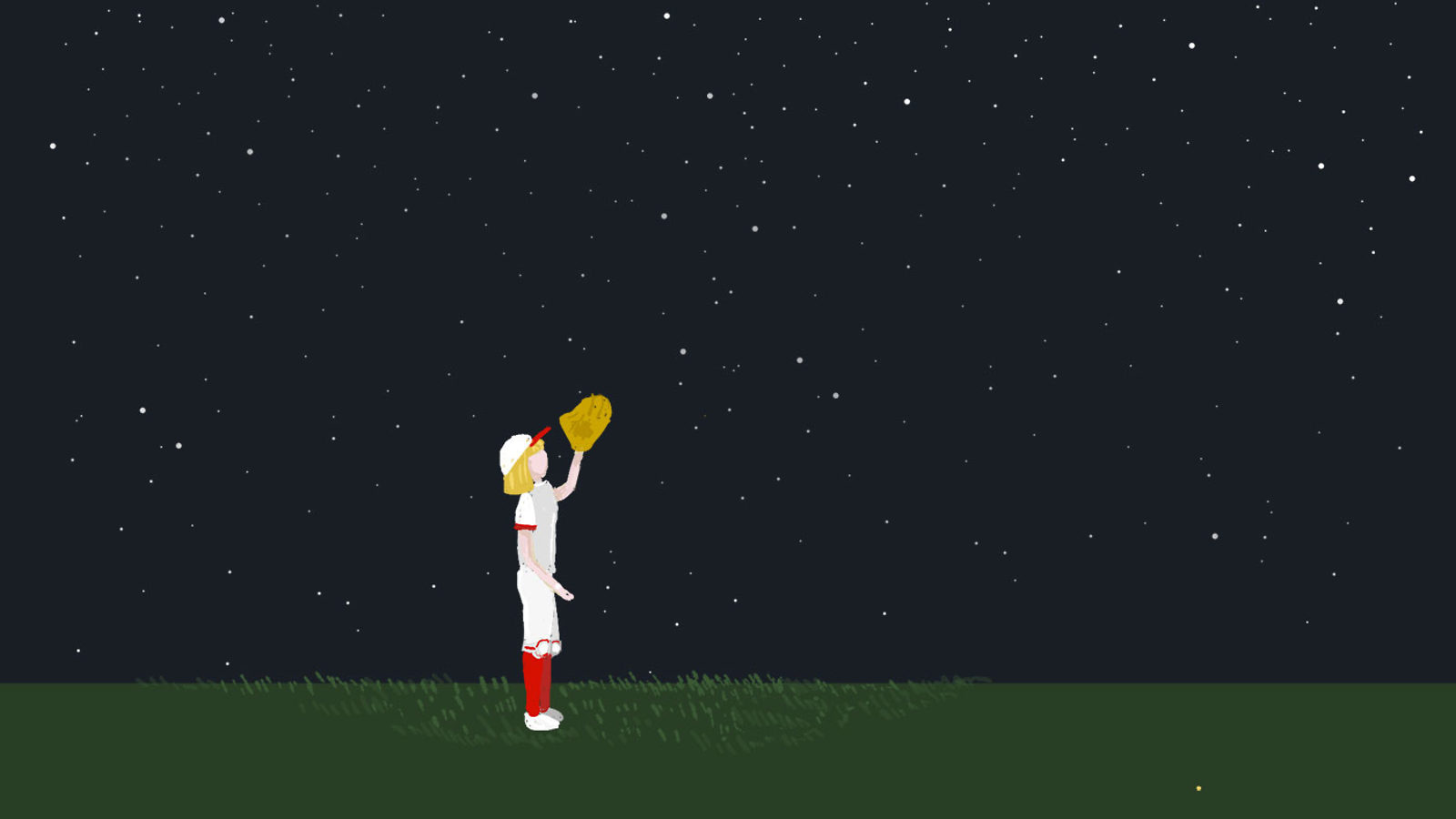 Catching a nearby supernova would be a once-in-a-lifetime experience that could give scientists a glimpse into physics they could never recreate on Earth.

Thousands of years ago, when a stargazer noticed a bright, new speck in the sky, one that wasn’t there the night before, he likely would have been mystified. For early astronomers, stars were eternal, appearing faithfully on the dark firmament night after night since the beginning of time. What message might the gods be sending by throwing this newcomer into the familiar pattern?

“If stars developed on a faster time scale, then people might have been able to figure out sooner, ‘Gee, they’re not just points painted on the ceiling,’” says John Beacom, a physicist at The Ohio State University. “They didn’t know how to decode it when a new star appeared, and they couldn’t guess it was a star exploding.”

Nowadays physicists not only are aware of these celestial explosions, they eagerly await the next one to happen nearby. An exploding star’s intense conditions could provide us with a glimpse of physics that we could never recreate on Earth.

Supernovae are not rare. Every second, a few stars in the universe expire as supernovae. But it’s a big universe, and in our own Milky Way, only two or three go off every hundred years, scientists estimate. The last observed supernova went off in the Large Magellanic Cloud, just outside the Milky Way at a distance of 163,000 light-years from Earth. That was seen in 1987. The last observed supernova in our own galaxy was Kepler’s Star, spotted in 1604. It was 20,000 light-years away.

Supernovae come in two types. One type of supernova is born when two white dwarfs merge or when, in a binary star system consisting of a white dwarf and another type of star, the white dwarf accretes too much material from the other. The overwhelming mass of the merged star compresses it to the point that the resulting heat ignites a thermonuclear runaway.

A second type of supernova, called a core-collapse supernova, starts out as a giant star more than eight times as massive as the sun. These stars burn first through the lighter elements and then the heavier ones, fusing the lighter into heavier materials as it goes, until what remains is a nickel-iron core, which cannot be fused further, and an envelope of lighter elements surrounding it. Unable to withstand its own gravitational pull, the star collapses inward and, in a matter of seconds, rebounds with an enormous shockwave. By the time this type of supernova fully expires, all the mass of its core, equivalent to that of about one or two suns, is squeezed into a ball the size of Manhattan.

When it goes off, it’s as luminous as an entire galaxy. Should one soon go off in our own galaxy, it would be that much more—wait for it—illuminating. Scientists would amass far more and far more detailed data from a supernova explosion that was, say, a mere 20,000 light-years away than from their faraway counterparts.

“It’s a once-in-a-lifetime chance to get exquisite data to help us understand the thousands of observed supernovae at greater distances,” Beacom says.

It would be like bringing a distant supernova under a microscope. Scientists could better measure the dust formation that hints at how the star formed; home in on the size and brightness of the stars that give birth to the eventual supernovae; and obtain a higher-resolution picture of the star—a neutron star or a black hole—that’s left behind once the supernova lights go out.

It’s also a chance to glimpse the interior of a star. A core-collapse supernova gives off a 10-second burst of neutrinos. The slippery particles known for being able to pass through the densest material are the first to escape. It’s a razor-thin window for something one waits for decades to observe. Scientists at neutrino detectors around the globe are at the ready for such an occurrence, networked so that one group can alert the rest of the world when its detector has seen the blink-and-you-miss-them supernova neutrinos.

“It’s like standing out in far right field. Nothing is happening for hours. And all of a sudden there’s going to be a couple-of-second window when the ball is coming your way and you have to be there,” Beacom says. “That’s the same thing that’s happening with a Milky Way supernova, except it’s 20 or 30 years in the outfield.”

Scientists understand fairly well how neutrinos made in our Earthly laboratories shift from one of their three types into another, a behavior called oscillation. But the neutrinos escaping supernovae, because of the star’s unimaginable density, would be incredibly closely packed together, scientists believe. Having to rub shoulders in such compact quarters might influence how they oscillate, and that oscillation could only be measured when a supernova occurs.

If scientists were to observe this collective neutrino mixing, as it’s called, it could sew up the nagging problem of ordering the masses of the three known types of neutrinos. This, in turn, would help answer the question of whether the neutrino is its own antiparticle and how it relates to the universe’s matter-antimatter imbalance.

“It’s not really known how often that happens and what the conditions are for that to happen, but it probably happens some of the time,” says Duke University’s Kate Scholberg, who spearheaded the supernova neutrino alert network. “There would be an abrupt cutoff of the neutrino flux. You’d see neutrinos and then, bam! There’d be no neutrinos. That would be extremely cool to see.”

Neutrino experiments Borexino and LVD in Italy, IceCube at the South Pole and KamLAND and Super-Kamiokande in Japan would be especially excited to see such an event. If the supernova produced gravitational waves—thus far undetected ripples in space-time—detectors such as the US-based LIGO detectors might be able to pick them up.

The sighting of a nearby supernova could better bring the science of stars down to Earth. Scientists know that many of elements we’re familiar with are forged in supernovae, up to and including iron, the heaviest known to form there. But they have no proof of where weightier stuff, such as gold and lead, originates.

Although the scientific community would be ecstatic to witness a supernova, a few, fearing it would mean the end of the world, would be happy if a nearby star could put off its blazing demise as long as possible. While not completely baseless, such worries are easily allayed. To have any major impact on our planet, a star would have to expire as a supernova within 30 light-years of Earth. Betelgeuse, the nearest known candidate to turn supernova, is about 600 light-years away.

“That’s a pretty safe distance,” Scholberg says. “I don’t think we have to worry about that.” 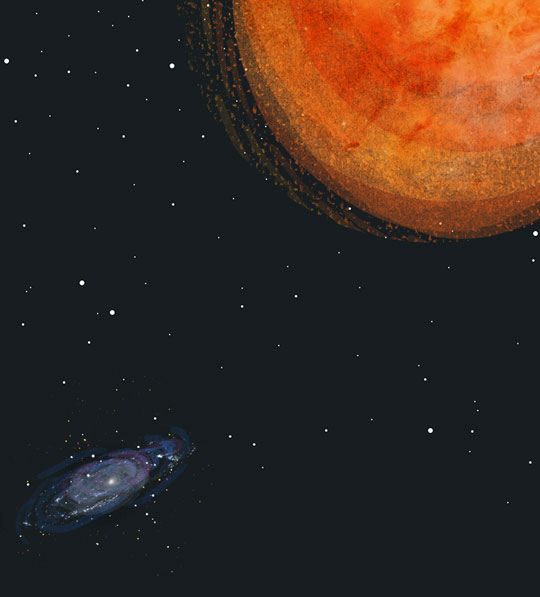 Artwork by Sandbox Studio, Chicago with Shawna X.
Follow
Use your browser’s print dialog box to create a pdf.

A worldwide network keeps astronomers and physicists ready for the next nearby supernova.

Upon arriving for work at the laboratory of Masatoshi Koshiba at the University of Tokyo, Yoji Totsuka handed me a fax telling of a supernova in the Large Magellanic Cloud, picked up by optical tel