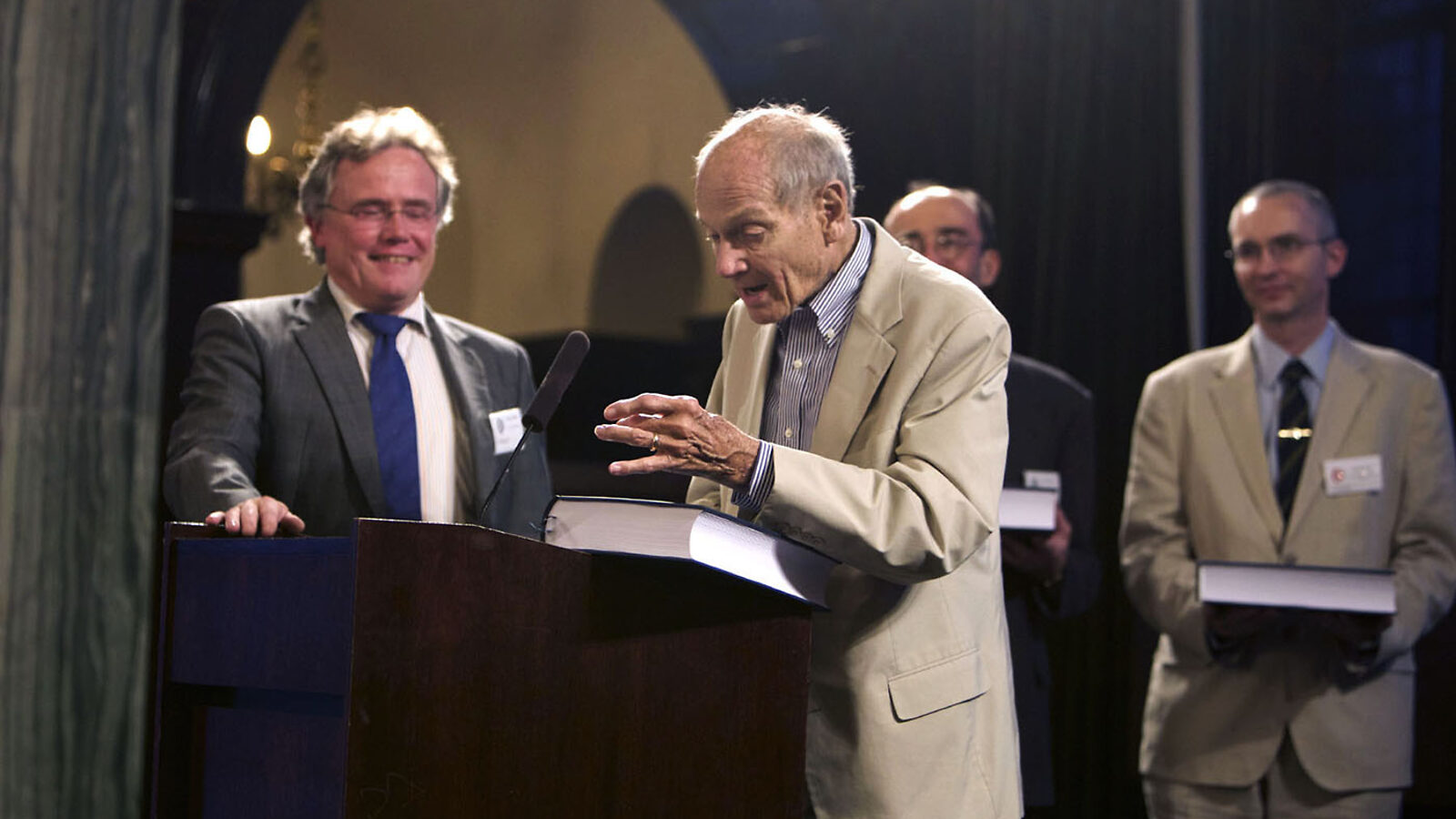 Imagine Argentina and Germany, the 2014 World Cup finalists, meeting after the final match to write down all of their strategies, secrets and training techniques to give to the world of soccer.

This will never happen in the world of sports, but it just happened in the world of particle physics, where the goal of solving the puzzles of the universe belongs to all.

Two independent research teams from opposite sides of the Pacific Ocean that have been in friendly competition to discover why there is more matter than antimatter in the universe have just released a joint scientific memoir, The Physics of the B Factories.

The 900-page, three-inch-thick tome documents the experiments—BaBar, at the Department of Energy’s SLAC National Accelerator Laboratory in California, and Belle, at KEK in Tsukuba, Japan—as though they were the subject of a paper for a journal.

“Producing something like this is a massive undertaking but brings a lot of value to the community,” says Tim Nelson, a physicist at SLAC who was not involved in either experiment. “It’s a thorough summary of the B-factory projects, their history and their physics results. But more than that, it is an encyclopedia of elegant techniques in reconstruction and data analysis that are broadly applicable in high energy physics. It makes an excellent reference from which nearly any student can learn something valuable.”

BaBar and Belle were built to find the same thing: CP violation, a difference in the way matter and antimatter behave that contributes to the preponderance of matter in the universe. And they went about their task in essentially the same way: They collided electrons and their antimatter opposites, positrons, to create pairs of bottom and anti-bottom quarks. So many pairs, in fact, that the experiments became known as B factories—thus, the book title.

Both experiments were highly successful in their search, though what they found can’t account for the entire discrepancy. The experiments also discovered several new particles and studied rare decays.

In the process of finding CP violation they verified a theoretical model, called the CKM matrix, which describes certain types of particle decays. In 2008, Japanese theorists Makoto Kobayashi and Toshihide Maskawa—the “K” and the “M” of CKM—shared the Nobel Prize for their thus-verified model. The two physicists sent BaBar and Belle a thank-you note.

Meanwhile, Francois Le Diberder, the BaBar spokesperson at the time, had an idea.

“It’s Francois’ fault, really,” says Adrian Bevan, a physicist at Queen Mary University of London and long-time member of the BaBar collaboration. “In 2008 he said, ‘We should document the great work in the collaboration.’ The idea just resonated with a few of us. And then Francois said, ‘Let’s invite KEK, as it would be much better to document both experiments.’“

Bevan and a few like-minded BaBar members, such as Soeren Prell from Iowa State University, contacted their Belle counterparts and found them receptive to the idea. They recruited more than 170 physicists to help and spent six years planning, writing, editing and revising. Almost 2000 names appear in the list of contributors; five people, including Bevan, served as editors. Nobel laureates Kobayashi and Masakawa provided the foreward.

The book has many uses, according to Bevan: It’s a guide to analyzing Belle and BaBar data; a reference for other experiments; a teaching tool. Above all, it’s a way to keep the data relevant. Instead of becoming like obsolete alphabets for dead languages, as has happened with many old experiments, BaBar and Belle data can continue to be used for new discoveries. “This, along with long term data access projects, changes the game for archiving data,” Bevan says.

In what may or may not have been a coincidence, the completion of the manuscript coincided with the 50th anniversary of the discovery of CP violation. At a workshop organized to commemorate the anniversary, Bevan and his co-editors presented three specially bound copies of the book to three giants of the field: Nobel laureate James Cronin (pictured above, accepting his copy), one of the physicists who made that first discovery 50 years before, and old friends Kobayashi, who accepted in person, and Masakawa, who sent a representative.

Bevan jokes that Le Diberder cost them six years of hard labor, but the instigator of the project is unrepentant.

“Indeed, the idea is my fault,” Le Diberder, who is now at France’s Linear Accelerator Laboratory, says. “But the project itself got started thanks to Adrian and Soeren, who stepped forward to steward the ship. Once they gathered their impressive team they no longer needed my help except for behind-the-scenes tasks. They had the project well in hand.”

Bevan isn’t sure about the “well in hand” characterization. “It took a few years longer than we thought it would because we didn’t realize the scope of the thing,” Bevan says. “But the end result is spectacular.

“It’s War and Peace for physicists.”