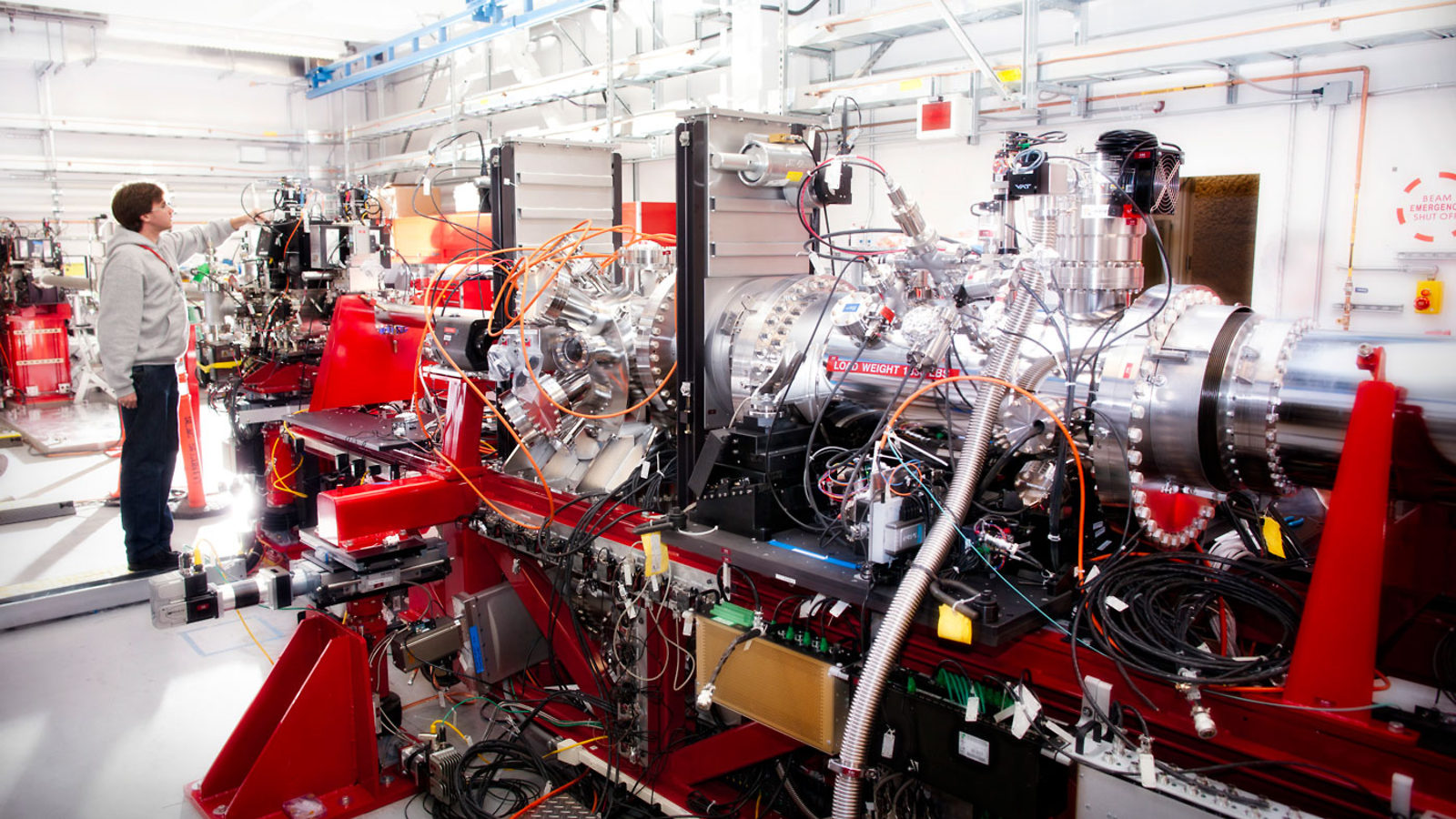 In late 1940s, scientists doing fundamental physics research at the General Electric Research Laboratory in Schenectady, New York, noticed a bright arc of light coming from their particle accelerator. As a beam of electrons whipped around the accelerator’s circular track, photons trickled away like water from a punctured hose.

At the time, this was considered a problem; the leaking photons were sapping energy from the electron beam. But scientists at labs around the world were already looking into the phenomenon, and not long after, circular particle accelerators were being built explicitly to capture the escaping light.

Today, these instruments are called synchrotrons, and they serve as powerful tools for studying the atomic and molecular structure of a seemingly limitless number of materials.

Despite their symbiotic beginning, synchrotron science and particle physics existed largely independent of one another. However, recent developments in the design and construction of particle detectors for synchrotron experiments—as well as new light source instruments—have sparked a reunion.

Modern synchrotrons generate powerful beams of light—infrared, ultraviolet, or X-ray—and aim them at a sample—such as a protein being tested for use in a drug. The light interacts with the sample, bouncing off of it, passing through it or being absorbed into it. (Imagine a beam of sunlight diffracting in a crystal or reflecting off the face of a watch.) By detecting how the sample changes the light, scientists can gather all kinds of information about its structure, make-up and behavior.

A synchrotron facility can host dozens of experiments at a time. The detector plays a vital role in each one: It captures the light, which becomes the data, which holds the answers to the experimenter’s questions.

And yet from the 1950s through the 1990s, the vast majority of detectors used at synchrotrons were not built specifically for these experiments. The designers and engineers would usually buy off-the-shelf X-ray detectors intended for other purposes, or adapt used detectors the best they could to fit the needs of the users.

Heinz Graafsma, head of the detector group at DESY, the German Electron Synchrotron, says the science coming out of synchrotrons during this time of patchwork detectors was fantastic, thanks largely to the dramatic improvements to the quality of the light beam. But that same rapid advancement made developing detectors “like shooting at a moving target,” Graafsma says. Customized detectors could take as long as a decade to design and build, and in that time the brightness of the light beam could go up by two or three orders of magnitude, rendering the detector obsolete.

The lack of custom detectors may also simply have come down to tight budgets, says Sol Grunner, former director of the Cornell High Energy Synchrotron Source or CHESS.

Frustrated with the limits of detector technology, Gunner became one of the early pioneers to build custom detectors for synchrotrons, allowing scientists to conduct experiments that could not be done otherwise. His work in the 1990s helped set the stage for a cultural shift in synchrotron detectors.

In the last 15 years, things have changed, especially with the advent of the free-electron laser—a kind of synchrotron on steroids.

Photon scientists have begun to face some of the same challenges as particle physicists: Scientists at light sources increasingly must collect huge amounts of data at a dizzying rate.

So they have begun to look to particle physicists for technological insight. The partnerships that have developed have turned out to be beneficial for both sides.

The Linac Coherent Light Source, an X-ray free-electron laser at SLAC National Accelerator Laboratory, has six beamlines open for users. The LCLS has produced 6 petabytes of data in its first five years of operation and currently averages 1.5 petabytes per year. That much stored data is comparable to the major experiments at the Large Hadron Collider at CERN.

“There’s a big team, it’s actually bigger than the detector team, handling the big data that comes out of the LCLS,” says Chris Kenny, head of the LCLS detector group. “A lot of the know-how and a lot of the people were taken directly from particle physics.”

At the National Synchrotron Light Source at Brookhaven National Laboratory, a group led by Pete Siddons is developing a detector that will use something called a Vertically Integrated Photon Imaging Chip, designed by scientists and engineers at Fermilab. VIPIC is an example of a circuit built with a specific purpose in mind, rather than a generic circuit that can have many applications. High-energy physics helped pioneer the creation of application-specific integrated circuits, called ASICs.

With the advanced capability of the VIPIC chip, the researchers hope the new detector will allow synchrotron users to watch fast processes as they take place. This could include watching materials undergo phase transitions, such as the change between liquid and solid.

Siddons and his NSLS detector team are building the silicon detectors that will capture the light, but they need particle physicists to fabricate the highly specialized integrated circuits for sorting all the incoming information.

Physicists and engineers at Fermilab design the circuits, which are then fabricated at commercial foundries. Fermilab scientists then put the circuits and particle sensors together into large integrated systems. The collaborative project will also involve contributions by scientists at Argonne National Laboratory and AGH University of Science and Technology in Krakow, Poland.

“You need very expensive software tools to do it—for doing the design and layout and simulating and checking,” Siddons says. “And they have that, because the high-energy physics community has been building large detector systems forever.”

Benefits for both sides

“We may build a few large scale detectors a decade,” says Ron Lipton, a Fermilab scientist who has been involved with the development of several large scale particle physics detectors and is a collaborator on the VIPIC chip.

Partnering with synchrotron science has given particle physicists a chance to develop and test new technologies on a shorter time scale, he says.

Scientists at the Paul Scherrer Institute in Switzerland used chip technology from particle physics experiments at CERN to create one of the most widely used custom synchrotron detectors: the Pilatus detector. Researchers at Fermilab and DESY say the work put into technologies like this have already fed new information and new ideas back into particle physics.

These days, more synchrotron facilities employ scientists and engineers to design custom detectors for lab use or for future commercialization. Half a dozen detectors, designed especially for light sources, are already available.

“It is at the moment very exciting,” Graafsma says. “There are budgets available. The facilities see this as an important issue. But also the technology is now available. So we can really build the detectors we want.”