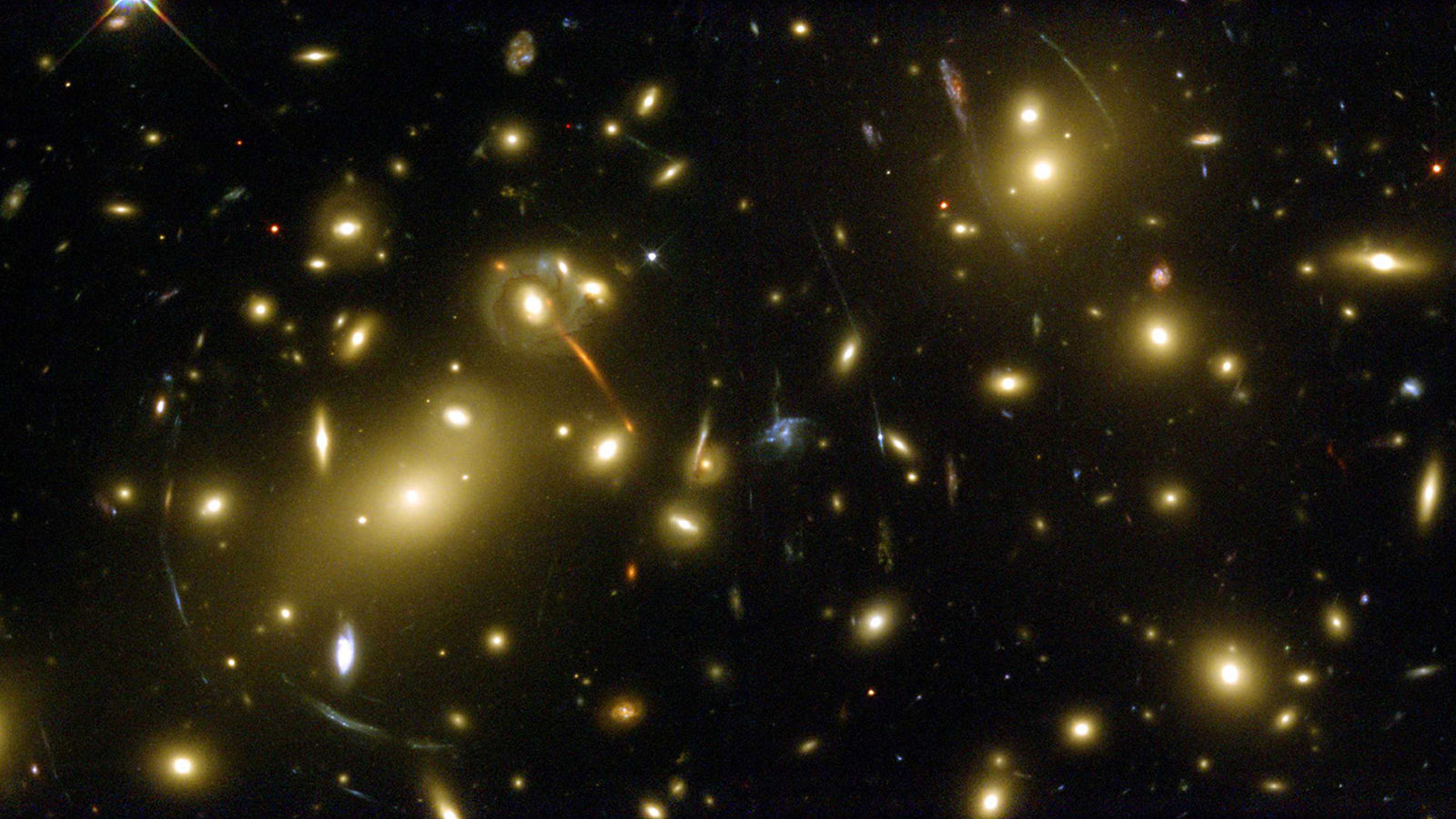 How to weigh a galaxy cluster

The study of galaxy clusters is bringing scientists closer to an understanding of the “dark” universe.

Step on a scale and you’ll get a quick measure of your weight. Weighing galaxy clusters, groups of hundreds or thousands of galaxies bound together by gravity, isn’t so easy.

But scientists have many ways to do it. This is fortunate for particle astrophysics; determining the mass of galaxy clusters led to the discovery of dark matter, and it’s key to the continuing study of the “dark” universe: dark matter and dark energy.

“Galaxy cluster measurements are one of the most powerful probes of cosmology we have,” says Steve Allen, an associate professor of physics at SLAC National Accelerator Laboratory and Stanford University.

When you weigh a galaxy cluster, what you see is not all that you get. Decades ago, when scientists first estimated the masses of galaxy clusters based on the motions of the galaxies within them, they realized that something strange was going on. The galaxies were moving faster than expected, which implied that the clusters were more massive than previously thought, based on the amout of light they emitted. The prevailing explanation today is that galaxy clusters contain vast amounts of dark matter.

Measurements of the masses of galaxy clusters can tell scientists about the sizes and shapes of the dark matter “halos” enveloping them and can help them determine the effects of dark energy, which scientists think is driving the universe’s accelerating expansion.

Today, researchers use a combination of simulations and space- and ground-based telescope observations to estimate the total masses of galaxy clusters.

Redshift, blueshift: Just as an ambulance’s siren seems higher in pitch as it approaches and lower as it speeds into the distance, the light of objects traveling away from us is shifted to longer, “redder” wavelengths, and the light of those traveling toward us is shifted to shorter, “bluer” wavelengths. Measurements of these shifts in light coming from galaxies orbiting a galaxy cluster can tell scientists how much gravitational pull the cluster has, which is related to its mass.

Gravitational lensing: Gravitational lensing, theorized by Albert Einstein, occurs when the light from a distant galaxy is bent by the gravitational pull of a massive object between it and the viewer. This bending distorts the image of the background galaxy (pictured above). Where the effects are strong, the process can cause dramatic distortions; multiple images of the galaxy can appear. Typically, however, the effects are subtle and require careful measurements to detect. The greater the lensing effect caused by a galaxy cluster, the larger the galaxy cluster’s mass.

X-rays: Galaxy clusters are filled with superhot, 10- to 100-million-degree gas that shines brightly at X-ray wavelengths. Scientists use X-ray data from space telescopes to find and study massive galaxy clusters. They can use the measured properties of the gas to infer the clusters’ masses.

“These methods are much more powerful in combination than alone,” says Aaron Roodman, a faculty member at the Kavli Institute for Particle Astrophysics and Cosmology at SLAC National Accelerator Laboratory.

Even with an extensive toolkit, it remains a challenging business to weigh galaxy clusters,  says Marc Kamionkowski, a theoretical physicist and professor of physics and astronomy at Johns Hopkins University. They are constantly changing; they continue to suck in matter; their dark matter halos can overlap; and no two are alike.

“It’s like asking how many birds are in my backyard,” he says.

Despite this, Allen says he sees no roadblocks toward pushing mass estimates to within a few percent accuracy.

“We will be able to take full advantage of these amazing new data sets that are coming along,” he says. “We are going to see rapid advances.”