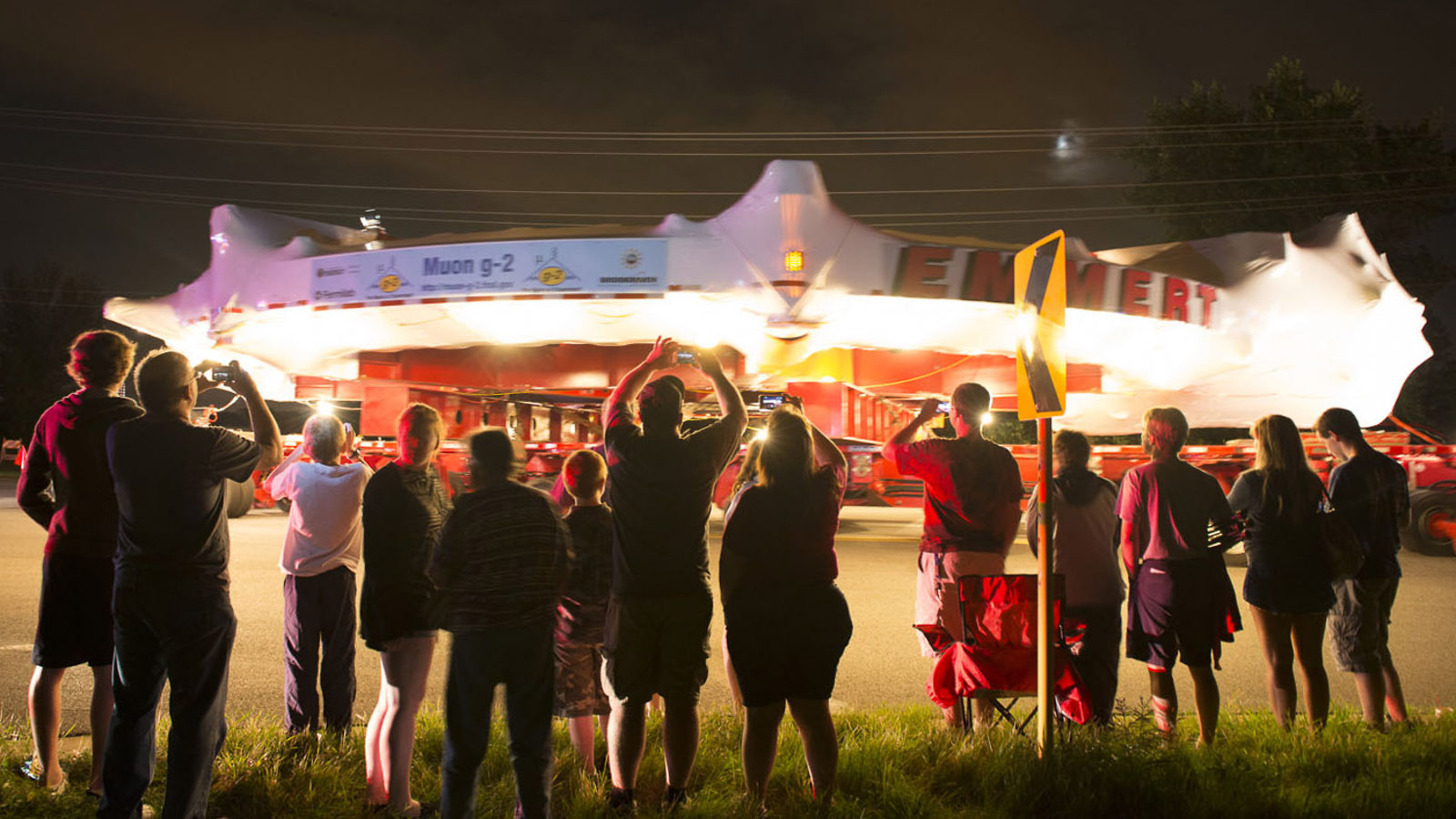 For the last three nights, a big rig has traveled slowly down the roads of suburban Illinois bearing an American flag and the warning sign “Oversize Load.” The warning may have been an understatement.

Its “load” was a 50-foot, 17-ton electromagnet that, for the last month, has voyaged by land and by sea from Brookhaven National Laboratory on Long Island. Early this morning, it reached its final destination: Fermi National Accelerator Laboratory outside of Chicago.

The electromagnet arrived accompanied by an impressive entourage: a dozen state trooper cars and more than a handful of county sheriffs and local police, plus crews from a company called Roadsafe, which was tasked with removing roadside signs ahead of the convoy and righting them after it passed. It will make its final move across the laboratory site this afternoon.

The logistics of the move have captured imaginations all along the way. But underneath the spectacle is important, potentially groundbreaking science.

In 2001, Brookhaven scientists used the ring to measure that wobble. Taking into consideration their current understanding of physics, scientists can predict what it should be like. If it turns out to be different than expected, it could indicate the presence of new physics.

In the first iteration of this experiment, Brookhaven physicists found hints that the wobble was off. Relocating the experiment to Fermilab will allow it to run in a more intense particle beam (for less money than it would cost to build the experiment anew), giving a more precise answer.

“We’ve been trying for years to really determine whether we’ve discovered something new and exciting,” says Muon g-2 Spokesperson Lee Roberts, who began working on the experiment in 1984. “We’re all excited to see the answer. It’s exciting for me personally, and it’s exciting for science.”

To relocate the magnet, the Muon g-2 team worked for over a year with Emmert International, a company that subsists on moving big, unwieldy objects, to plan the journey, which involved constructing a bright red fixture to hold the ring in place (prompting many observers along the way to compare it to a UFO).

The ring is an exquisitely sensitive device; it cannot be bent or twisted by more than a few millimeters.

“This is one of the widest, most fragile, dimensionally unusual, temperamental projects we’ve done,” says Terry Emmert, owner of Emmert International. “It’s amazing to see it all come together.”

The ring first saw daylight in mid-June, when a team from Emmert slid it out of the building that had housed it since the 1990s. After a week’s rain delay, it traveled six miles along Long Island’s William Floyd Parkway—in about half the expected time of six hours—to the Smith Point Marina, where it was loaded by crane onto a 50-by-150-foot barge and pulled by a pair of tugboats out to sea.

“The crane is just enormous,” says Chris Polly, the Muon g-2 project manager at Fermilab. “It’s a 500-ton capacity crane that’s four or five stories high, so you can pick up this device that weighs 60 tons [with the support structure] and get it on the barge. The whole procedure went pretty smoothly.”

From there, the barge—essentially a giant floating plank—faced 3200 miles of ocean and river waters and a month’s worth of unpredictable summer weather. First it floated from Long Island down the East Coast and around Florida. The barge was forced to camp out for five nights in Norfolk, Virginia, to wait out a passing tempest. After that, the barge narrowly escaped brewing tropical storm Chantal.

After rounding the tip of Florida, the barge was scheduled to move directly up the Mississippi. Due to heavy currents, which would have caused barges to back up at the locks, the team decided to take a back-roads alternative, maneuvering up the Tombigbee Waterway and the Tennessee River. On July 12, the ring made a stop in Mobile, Alabama, where Trident, the ocean-going tugboat, handed the barge off to Miss Katie, a white tugboat with red trim that coordinated nicely with the red support structure for the electromagnet wrapped in white plastic.

Miss Katie pushed the barge into the Mississippi and ultimately to Lemont, Illinois, where—after a brief pit stop in the wrong port—it greeted a cast of more than 100 scientists, family members and curious onlookers on July 20.

The ring will complete its cross-country trip later today, but its second chance at searching for new physics has just begun.