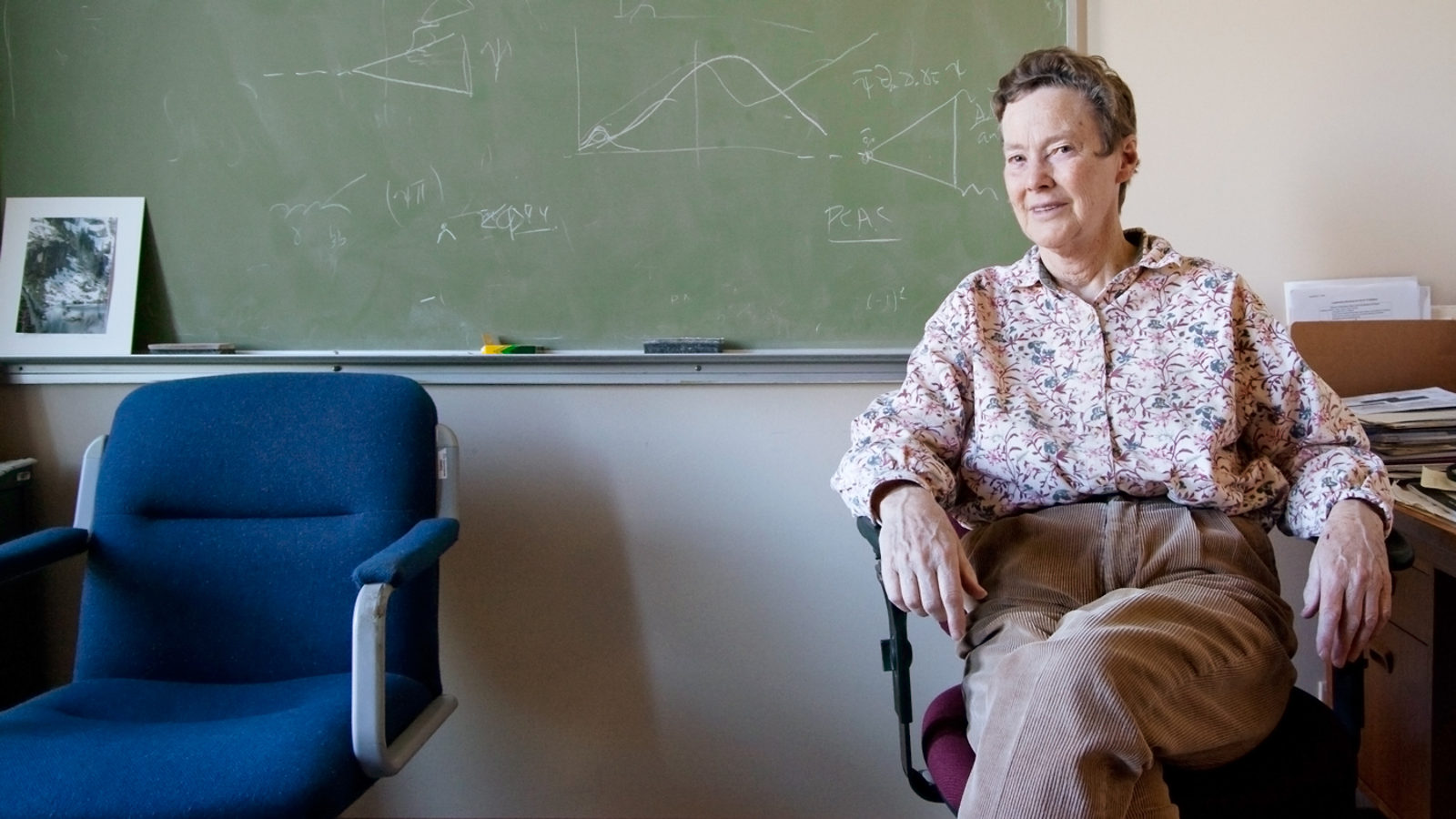 Modern theoretical physicists spend much of their time examining the symmetries governing particles and their interactions. Researchers describe these principles mathematically and test them with sophisticated experiments, leading to profound insights about how the universe works.

For example, understanding symmetries in nature allowed physicists to predict the flow of electricity through materials and the shape of protons. Spotting imperfect symmetries led to the discovery of the Higgs boson.

One researcher who has used an understanding of symmetry in nature to make great strides in theoretical physics is Helen Quinn. Over the course of her career, she has helped shape the modern Standard Model of particles and interactions— and outlined some of its limitations. With various collaborators, she has worked to establish the deep mathematical connection between the fundamental forces of nature, pondered solutions to the mysterious asymmetry between matter and antimatter in the cosmos and helped describe properties of the particle known as the charm quark before it was discovered experimentally.

“Helen's contributions to physics are legendary,” says Stanford University professor of physics Eva Silverstein. Silverstein first met Quinn as an undergraduate in 1989, then became her colleague at SLAC in 1997.

Quinn’s best-known paper is one she wrote with fellow theorist Roberto Peccei in 1977. In it, they showed how to solve a major problem with the strong force, which governs the structure of protons and other particles. The theory continues to find application across particle physics. “That's an amazing thing: that an idea you had almost 40 years ago is still alive and well,” says Peccei, now a professor emeritus of physics at the University of California, Los Angeles.

Quinn was born in Australia in 1943 and emigrated with her family to the United States while she was still a university student. For that reason, she says, “I had a funny path through undergraduate school.”

When she moved to Stanford University, she had already spent two years studying at the University of Melbourne to become a meteorologist with support from the Australian Weather Bureau, and needed to select an academic major that wouldn’t force her to start over again. That program happened to be physics.

With the longest linear accelerator in the world nearing completion next door at what is now called SLAC National Accelerator Laboratory, Stanford was an auspicious place to study particle physics, so Quinn stayed on to finish her PhD. “Really, the beginning was the fact that particle physics was bubbling at that time at Stanford, and that's where I got hooked on it,” she says. She entered the  graduate  program when women comprised only about 2 percent of all physics students in American PhD programs.

After finishing her PhD, Quinn traveled to Germany for postdoctoral research at the DESY laboratory before returning to the United States. She taught high school in Boston briefly before landing a position at Harvard University. While there, she collaborated with theorist Steven Weinberg and Howard Georgi to work on something known as “grand unified theories,” whimsically nicknamed GUTs. GUT models were attempts to bring together the three forces described by quantum physics: electromagnetism, which holds together atoms, and the weak and strong forces, which govern nuclear structure. (There still is no quantum theory of gravity, the fourth fundamental force.)

Quinn returned to SLAC during a leave of absence from Harvard, where she connected with Peccei. The two of them had frequent conversations with Weinberg and Gerard ’t Hooft, both of whom were visiting SLAC at that time. (Both Weinberg and ’t Hooft later won Nobel Prizes for their work on symmetries in particle physics.)

At that time, many theorists were engaged in understanding the strong force, which governs the structure of particles such as protons, using a theory called quantum chromodynamics, or QCD.  (The name “chromodynamics” refers to the “color charge” of quarks, which is analogous to electric charge.)

The problem: QCD predicted some results at odds with experiment, including an electrical property of neutrons.

Quinn and Peccei realized that they could make that problem go away if one type of quark had no mass. While that was at odds with reality, it hadn’t always been so, Quinn says: “That led me to think, well, in the very early universe when it's hot …quarks are massless.”

By adding a new symmetry once quarks acquired their masses from the Higgs field, they could resolve the problem with QCD. As soon as their paper came out, Weinberg realized the theory also made a prediction that Quinn and Peccei had not noticed: the axion, which might comprise some or all of the mysterious dark matter binding galaxies together. (Independently, Frank Wilczek also found the axion implicit in the Peccei-Quinn theory.) Quinn laughs now over how obvious she says it seems in retrospect.

After her collaboration with Peccei, Quinn worked extensively with experimentalists and other theorists at SLAC to understand the interactions involving the bottom quark. Studying particles containing bottom quarks is one of the best ways to investigate the symmetries built into QCD, which in turn may offer clues as to why there’s a lot more matter than antimatter in the cosmos.

Along the way, Quinn was elected as member of the National Academy of Sciences, and has received a number of prestigious prizes, including the J.J. Sakurai Prize for theoretical physics and the Dirac Medal from the International Center for Theoretical Physics. She also served as president of the American Physical Society, the premiere professional organization for physicists in the United States.

“The overarching goal is that most students should have the experience of learning and understanding, not just a bunch of disconnected facts,” she says.

Instead of enduring perpetual tests as required under current policy, she wants students to focus on learning “the way science works: how to think about problems as scientists do and analyze data and evidence and draw conclusions based on evidence.” Peccei calls her “unique among very well-known physicists” for this later work.

“She's devoted a tremendous amount of time to physics education, and has been really a champion of that at a national level,” he says.

On top of that, the Peccei-Quinn model remains a powerful tool for theorists and “a good candidate to solve some of the outstanding problems in particle physics and cosmology,” Silverstein says. Along with dark matter, these include Silverstein’s own research in string theory and early universe inflation.

As with her efforts on behalf of education, the impact of Quinn’s physics research is in how it lays the foundation for others to build on. There’s a certain symmetry in that.