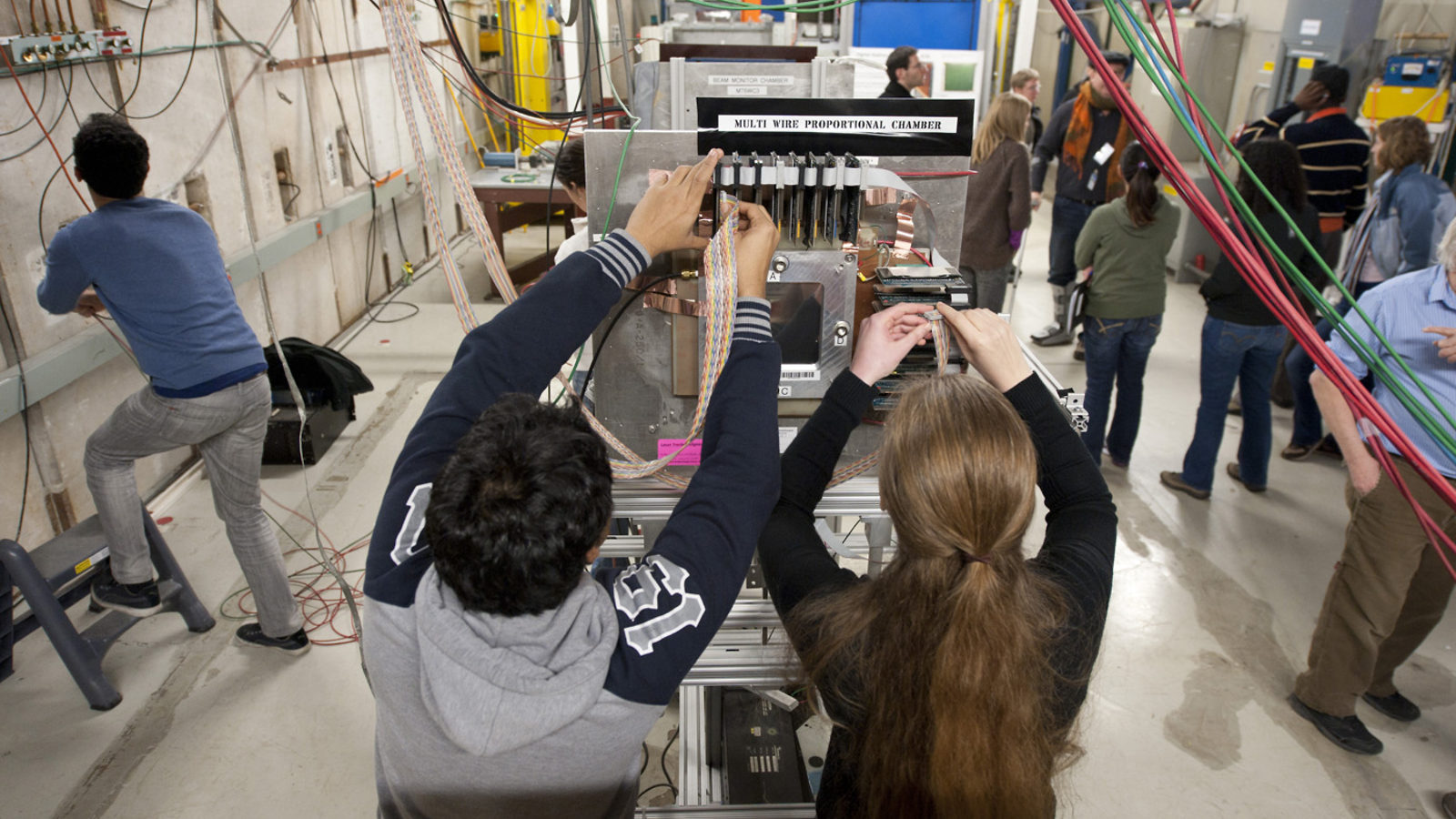 Experiments at the Large Hadron Collider put up with a lot. Not only do they withstand the hundreds of millions of particle collisions that take place within their detectors each second; they also collect huge amounts of information from them.

It’s only going to get more complicated: CERN is busy preparing to turn up the energy of the LHC in 2015.

To face the challenge, scientists around the world are working non-stop to make sure their detectors are fast enough and tough enough for the increase in collisions. They do this by testing materials and prototypes in beams of high-energy particles that simulate the environment inside the accelerator.

One place where they can do this is the Test Beam Facility at Fermi National Accelerator Laboratory, near Chicago.

“High-energy physics is a global enterprise,” says Richard Cavanaugh, a professor at the University of Illinois, Chicago, with a joint appointment at Fermilab, and the former head of Fermilab’s LHC Physics Center.

With the CERN accelerator complex—which includes a similar testing facility—shut down since early 2013 for the upgrades, Fermilab’s facility is seeing even more LHC-related work than usual.

“The Fermilab test beam has been a tremendous resource and has allowed for research and development to continue during the CERN accelerator shutdown,” Cavanaugh says.

The Test Beam Facility (pictured above) is an R&D center that provides researchers with access to a versatile particle beam—which they can use at a variety of energies and intensities, using different types of particles. This facility is invaluable for scientists who work on the LHC experiments such as ATLAS and CMS—two general-purpose detectors located at CERN—to test materials and detector components.

In the past year, CMS scientists from CERN, Bristol University in the UK, DESY laboratory in Germany, and the University of Taiwan have used Fermilab to test detector parts and prototypes for future CMS upgrades.

They tested parts and prototypes for a high-rate pixel tracker, which will measure the charge and momentum of particles created immediately after the moment of collision; a forward calorimeter, which will let scientists detect particles moving close to the beam line; and several radiation-hard materials and sensors, which will allow future components to function appropriately under extremely high-energy and high-luminosity conditions.

The ATLAS collaboration has been busy as well. ATLAS scientists brought to Fermilab prototypes for tile calorimeters, which will help make the trigger system inside the hadronic calorimeter more intelligent. They are also testing how the electronics for this system will react to a high radiation environment such as the next planned iteration of the LHC, envisioned for 2018.

This period of research and development will allow scientists to see how their prototypes will age with time in the accelerator, and will give researchers the opportunity to improve their designs before installing the equipment into the detectors, Cavanaugh says.

Once the R&D is completed, scientists will continue to use the Fermilab test beam to characterize the performance of the detector components to predict how these parts will function during future runs of the LHC.