Using an entire galaxy as a lens to look at an object in the far distance, researchers are learning more about powerful jets emitted when matter falls into a black hole. 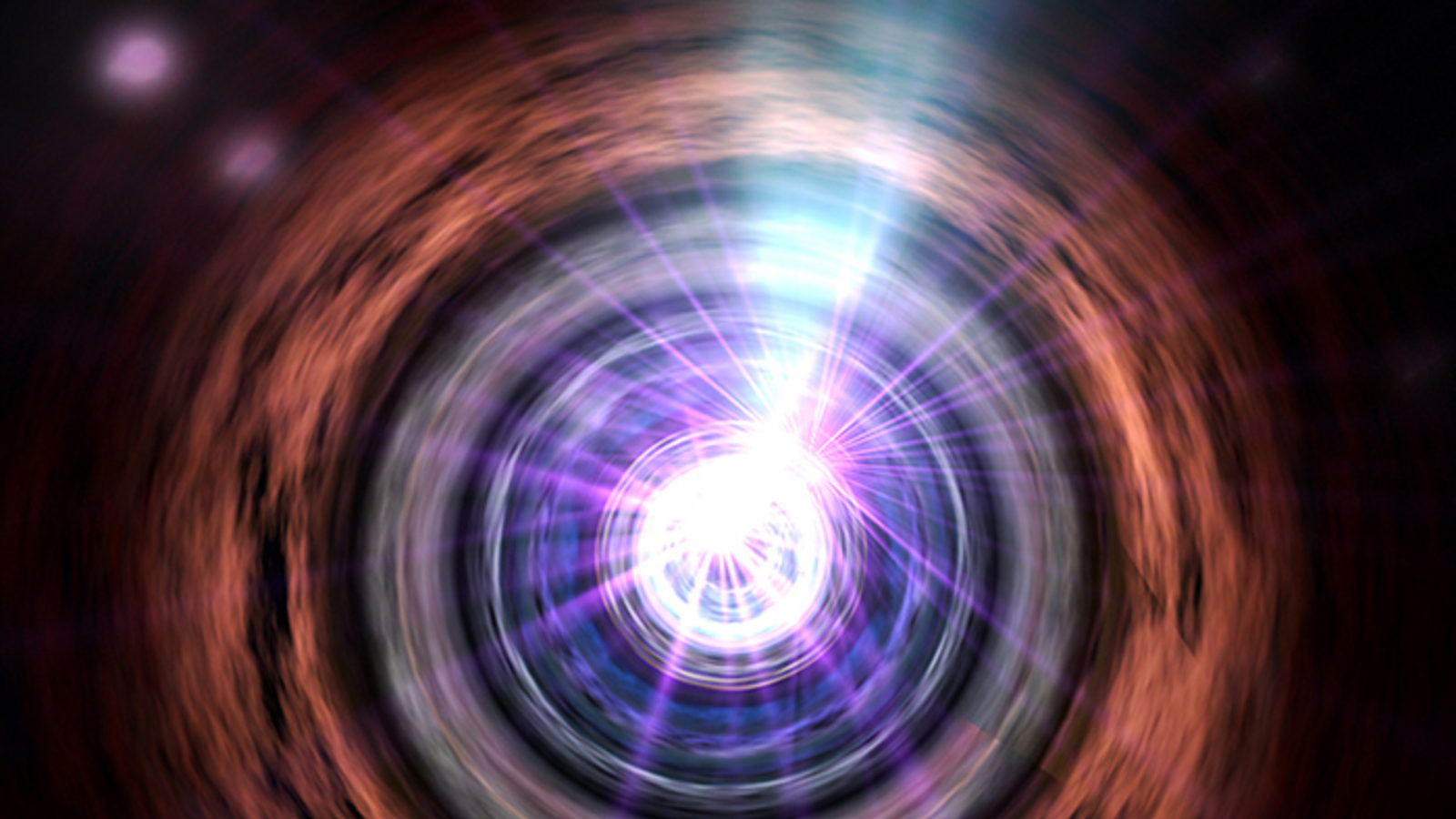 Using an astronomer’s trick, scientists analyzing data from the Fermi Gamma-ray Space Telescope are learning about how powerful jets of light are produced by matter spiraling into a black hole.

As light from a distant object—such as matter falling into a black hole—travels through the universe, it sometimes encounters a massive object such as a large galaxy. Due to the nature of gravity and space, when this happens, the light rays bend—or “gravitationally lens”—around the galaxy. The result is a lensing that amplifies the original light, revealing more information than could be gathered from the same light rays traveling a straight path.

The Fermi telescope measurements, the first to use this type of gravitational lensing with gamma-ray light, could help provide new insights into how powerful black-hole jets work and could even help researchers better measure universe's rate of expansion.

"We began thinking about the possibility of making this observation a couple of years after Fermi launched, and all of the pieces finally came together in late 2012," said Teddy Cheung in a NASA press release issued this week. Cheung is the lead scientist for the finding, which was made by researchers at the Kavli Institute for Particle Astrophysics and Cosmology at SLAC in California, the Naval Research Laboratory in Washington DC, NASA Goddard Space Flight Center in Maryland, INAF Istituto di Radioastronomia in Italy and 25 other institutions around the globe.

In September 2012, Fermi's Large Area Telescope detected a series of bright gamma-ray flares from a source known as B0218+357, located 4.35 billion light-years from Earth in the direction of a constellation called Triangulum. These powerful flares, in a known gravitational lens system, provided the key to making the lens measurement.

Astronomers classify B0218+357 as a blazar—a type of active galaxy noted for its intense emissions and unpredictable behavior. At the blazar's heart is a supersized black hole with a mass millions to billions of times that of the sun. As matter spirals toward the black hole, some of it blasts outward as jets of particles traveling near the speed of light.

Long before the light from one of these jets reaches us, it passes directly through a face-on spiral galaxy—one very much like our own—about 4 billion light-years away.

The galaxy's gravity bends the light into different paths, so astronomers see the background blazar as dual images. With just a third of an arcsecond (less than 0.0001 degree) between them, the B0218+357 images hold the record for the smallest separation of any lensed system known.

While radio and optical telescopes can resolve and monitor the individual blazar images, Fermi's LAT cannot. Instead, the Fermi team exploited a "delayed playback" effect.

"One light path is slightly longer than the other, so when we detect flares in one image we can try to catch them days later when they replay in the other image," said team member Jeff Scargle, an astrophysicist at NASA's Ames Research Center.

In September 2012, when the blazar's flaring activity made it the brightest gamma-ray source outside of our own galaxy, Cheung realized it was a golden opportunity. He was granted a week of LAT target-of-opportunity observing time, from Sept. 24 to Oct. 1, to hunt for delayed flares.

Intriguingly, the gamma-ray delay is about a day longer than radio observations report for this system. And while the flares and their playback show similar gamma-ray brightness, in radio wavelengths one blazar image is about four times brighter than the other.

Astronomers don't think the gamma rays arise from the same regions as the radio waves, so these emissions likely take slightly different paths, with correspondingly different delays and amplifications, as they travel through the lens.

"Over the course of a day, one of these flares can brighten the blazar by 10 times in gamma rays but only 10 percent in visible light and radio, which tells us that the region emitting gamma rays is very small compared to those emitting at lower energies," said team member Stefan Larsson, an astrophysicist at Stockholm University in Sweden.

As a result, the gravity of small concentrations of matter in the lensing galaxy may deflect and amplify gamma rays more significantly than lower-energy light. Disentangling these so-called microlensing effects poses a challenge to taking further advantage of high-energy lens observations.

The scientists say that comparing radio and gamma-ray observations of additional lens systems could help provide new insights into the workings of powerful black-hole jets and establish new constraints on important cosmological quantities like the Hubble constant, which describes the universe's rate of expansion.

The most exciting result, the team said, would be the LAT's detection of a playback delay in a flaring gamma-ray source not yet identified as a gravitational lens in other wavelengths.

A paper describing the research will appear in a future edition of The Astrophysical Journal Letters.

How the public release of data from the Fermi Gamma-ray Space Telescope’s main instrument has affected the hundreds of researchers who use it—and resulted in more and better science.

Fermi telescope gazes through fog to count the stars

A recent measurement of how many gamma rays make it through a cosmic “fog” of starlight reveals just how many stars there are in the universe.