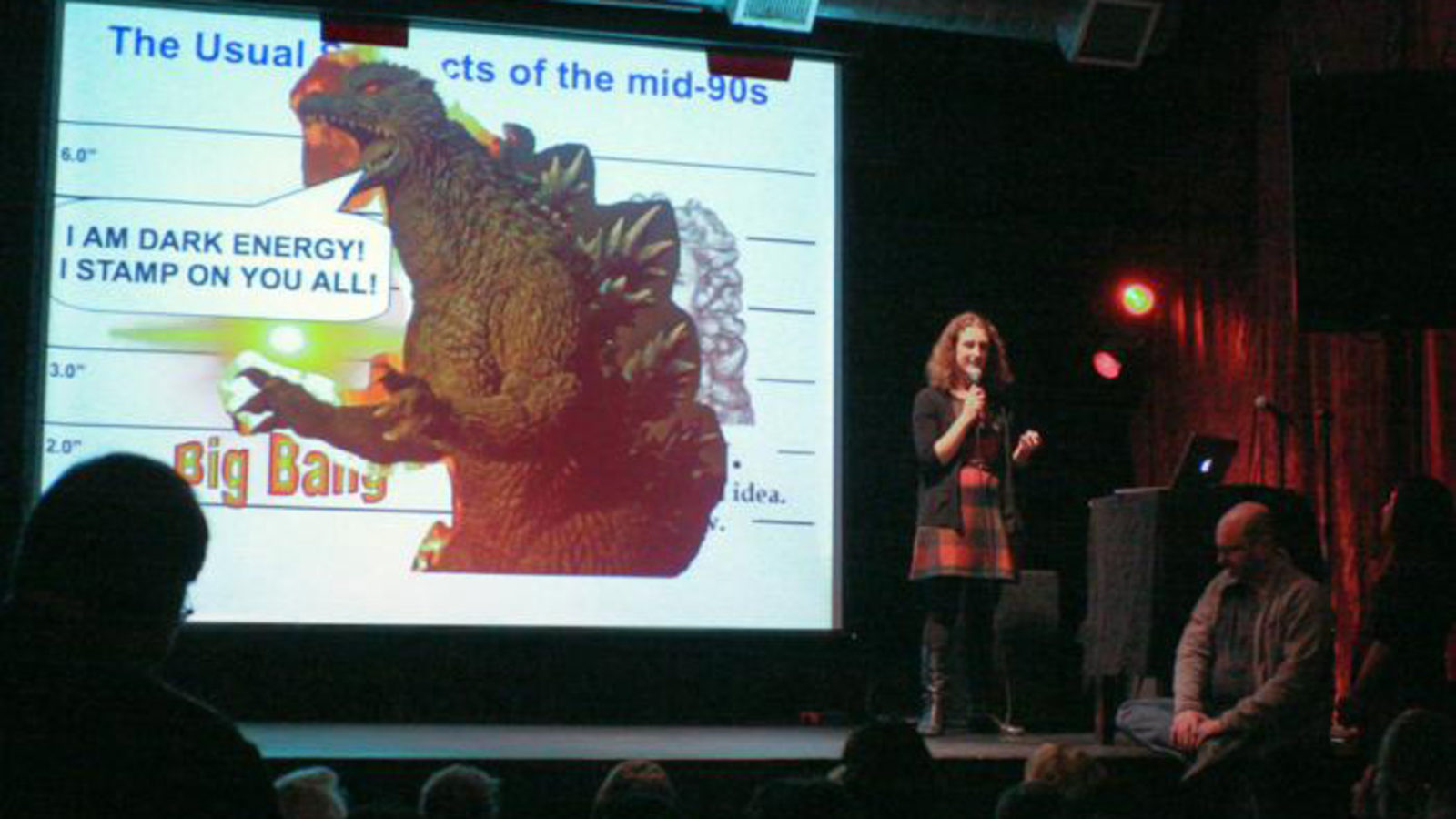 More than 250 self-proclaimed nerds pack a bar in the heart of San Francisco to learn something new.

On an otherwise drab block of Fell Street in San Francisco, the Rickshaw Stop stands out, a giant octopus spreading suckered tentacles across its purple façade. Inside, people cluster around a table, waiting for orders of grilled cheese sandwiches, and line up three deep around the bar.

There are nowhere near enough chairs in front of the stage, so many spectators sit cross-legged on the floor, watch from the balcony or stand at the back, straining to hear. A guy wanders by with a Rubik’s cube.

A young woman steps onstage, the second act of this Wednesday evening.

“Good evening, ladies and gentlemen,” she says. “My name is Debbie, and I’m about to blow your mind.”

Most nights the mind-blowing would be done by a band with a name like Apple Pie Hopes or New Thrill Parade. But tonight is Nerd Nite, a slightly boozy, laid-back tribute to human curiosity.

The woman on stage, cosmologist Debbie Bard of SLAC National Accelerator Laboratory, has just half an hour to explain one of the biggest puzzles in science: the mystery of dark energy and the fate of the universe. She does it with enthusiasm, humor, a cheesy movie monster and a currant cake.

The monster is dark energy, “the biggest mystery of all,” she says. It stomped all over scientists’ assumptions about the nature of the cosmos when they discovered, in the 1990s, that it was somehow making the universe expand faster and faster. The currant cake is the universe: As the batter rises and expands in the oven, it carries the currants with it, just as the expanding universe carries galaxies along.

“There is dark energy in this room right now, a very tiny amount,” Bard says. But maybe it’s not the same everywhere. Maybe some parts of the universe are expanding while others are contracting: “It’s mind-blowing. It’s a lot of fun to think about that kind of thing.”

In the end, she says, no one knows if the universe will keep expanding forever, spreading everything so far apart that the stars move out of view; slow down and begin to contract; or alternate between the two. These scenarios are known as the Big Freeze, the Big Crunch and the Big Bounce.

The audience sits enthralled, cracking up at slides of Sherlock Holmes and mystery book covers, slightly altered: “The Thin Dark Energy” by Dashiell Hammett, “Bangkok Dark Energy” by John Burdett. Cross-legged on the floor, it’s easy to overlook the fact that the room is getting really hot, your right foot has gone to sleep and your efforts to shift to a more comfortable position have knocked over your drink, which is creeping in an icy puddle toward someone’s rear end.

The venues vary: dive bars, swanky nightclubs, underground art spaces, movie theaters. But the key ingredients are the same: people who are excited about what they do and can tell a good story about it, whether it involves research on the Martian magnetosphere, octopus sex, roller derby tactics or the intricacies of the San Francisco sewage system, and—Bernhardt is emphatic about this—beer. On this particular night, experts talk about shibboleths—words, sounds or customs that can be used, like passwords, to distinguish one group of people from another—and the arcane world of crossword puzzle construction.

Some of the best presentations, Bernhardt says, involve “surprising complexity—something we take for granted, and when you lift up the hood and have someone show you inside, it’s amazing what’s going on in there.”

As if to illustrate the point, Kishore Hari, director of the Bay Area Science Festival, stands up to announce the first of a series of Nerd Nite field trips. The destination: San Francisco’s Southeast Water Pollution Control Plant, followed by beer at a local pub. (Cheers from the crowd.) “The director of the entire plant is giving us the tour. How badass is that?!” (Enthusiastic applause.)

Within hours the field trip has sold out.

Gwendolynne Barr, a technical writer from Oakland, stands watching the first two talks of the evening from the back of the room. It is her second Nerd Nite. “I think it’s terrific,” she says, “because it’s smart but laid-back. I love academic talks but sometimes you want to relax.  At Nerd Nite you can get a little bit of insight into a complex topic without having to read the Journal of Medicine or Nature magazine.”

As for Bard, she admits to being a bit nervous at first, but says she quickly relaxed and had a good time. And she found her work was not done when she left the stage.

“I was occupied pretty much the whole rest of the night. As people were leaving they would spot me and ask things,” she says. “People would ask me, ‘I think of dark energy this way; is that accurate? Can you call it anti-gravity?’ They wondered if they were understanding it properly. I got quite a lot of people asking about dark matter as well.”

Bard started out in particle physics; as a graduate student and postdoc in the United Kingdom, she would travel to SLAC to work on the BaBar experiment. But her interest gradually veered from the world of tiny fundamental particles toward cosmology—the study of the universe as a whole. When she came to SLAC to do more postdoctoral research, she wound up working on the Large Synoptic Survey Telescope, a project that will study both dark matter and dark energy with the world’s biggest digital camera. (“It’s going to be the coolest thing—the most sophisticated, most awesome telescope—and we’re building the camera from scratch,” she tells the audience.)

She says she has given talks to school kids and college students, but never one like this to an audience of interested amateurs.