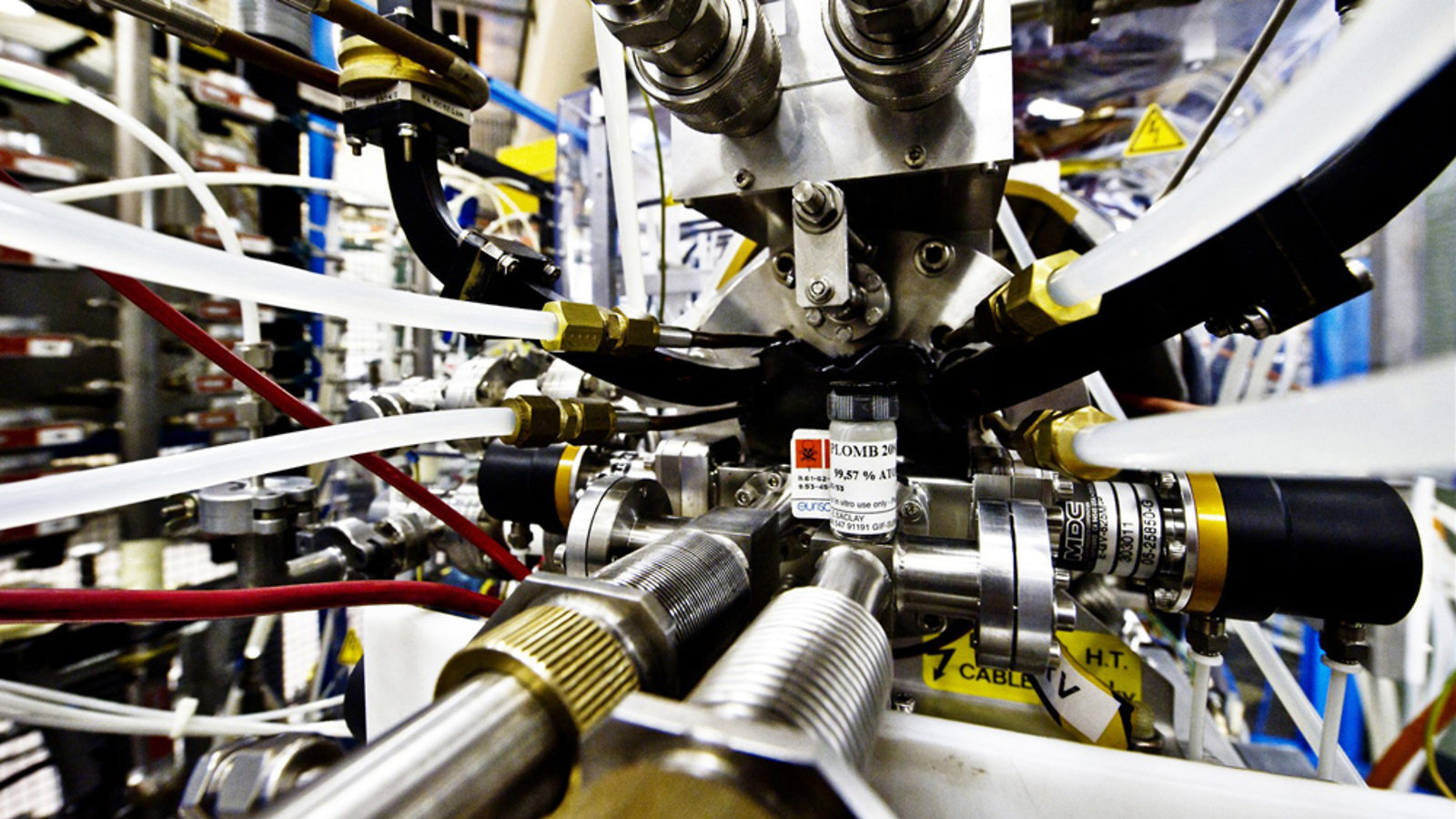 The Large Hadron Collider is getting ready for a two-year upgrade to prepare it to run at even higher energies. But first it's going for one more run.

Normally, scientists send protons smashing into each other in the LHC. In 2010 and 2011, they mixed it up for a few weeks and sent heavier particles, lead ions, careening around the 17-mile ring. When the lead ions smashed into each other, their protons and neutrons melted down to their smallest parts, quarks and gluons. At such high temperatures, those particles break bonds and float freely in a state of matter said to have been present just after the big bang—the quark-gluon plasma.

This week physicists began a new effort that might help them understand that state of matter.

For about three weeks, they will try a different combination, creating collisions of protons and lead ions at the LHC. This will be the first full-length run of its kind after a successful test run in September. This will also be the first time that all four major LHC experiments—ATLAS, CMS, ALICE and now LHCb—will collect data from proton-lead collisions.

“People are excited for the new conditions and the new physics opportunities,” says Michael Schmelling, an LHCb physicist who is leading the heavy-ion activities of the experiment. “Our detector wasn’t used in previous heavy-ion runs. It would’ve been overwhelmed with information, but now we are able to contribute.”

The LHCb scientists will study various aspects of particle production in the proton-lead collisions. This will provide complementary information to the other experiments, which will lead to a better understanding of the lead-lead collision program, Schmelling says.

“We learn a lot from our lead-lead collisions,” says Despina Hatzifotiadou, a physicist on ALICE. “But they are messy. There are a lot of collisions within each lead-lead interaction.”

“With heavy ions, we’re smashing apples into apples,” says Julia Velkovska, co-convener of the CMS heavy-ion group. Colliding a proton and a lead ion is more like shooting a bullet through an apple, she says. It's much easier to dig out the different pieces and see how they interacted than it is to separate chunks of one apple from chunks of another.

If scientists can see how one proton interacts with the protons and neutrons that make up the lead ion, they may be able to better understand how the quark-gluon plasma forms and how matter arises from it.

“It's an opportunity to study this at the very highest energy currently possible,” says Will Brooks, a former co-leader of the ATLAS heavy-ion group. “We'll be able to see things much clearer, and we should be able to understand things much better.”

ATLAS scientists plan to study the interactions of gluons and to look for something called gluon saturation, Brooks says. The so-far unobserved phenomenon would involve multiple gluons joining together to form a single new gluon.

Scientists will also keep an eye out for an unusual particle behavior they spotted during the pilot run, says Christof Roland, CMS heavy-ion group co-convener. Particles usually fly away from a point of collision in all directions, but “we saw that the particles were moving in the same direction,” he says. “We don’t know why. We expect to be able to study that more. “

The next three weeks should significantly grow their current set of data, according to accelerator physicist John Jowett. He already bets that this run will provide more than 300 times the rate of collisions per second seen in the test run.

“Everyone collaborates so well. We’ve all adjusted our schedules to correct any problems and to commission this operation as quickly as possible,” Jowett says. “And I expect that we’ll learn a lot from the physics of this run.”

For the first time, scientists at the Large Hadron Collider have collided protons with lead ions, a feat that will give them insight into the quark-gluon plasma.