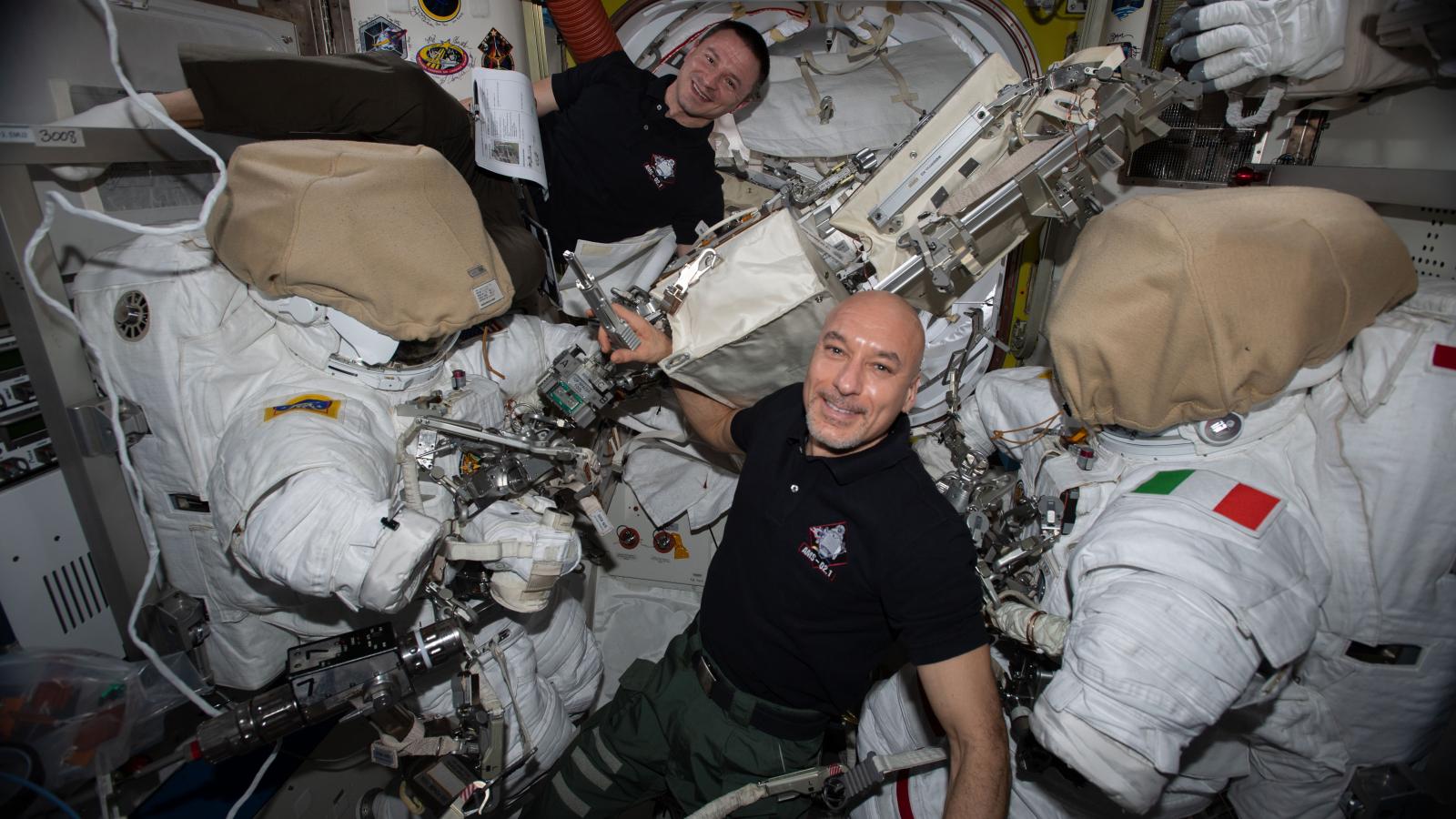 Normally, cutting a zip tie is an easy task. But when astronauts on a spacewalk from the International Space Station do it, it’s a different story.

“In your garage, that may not sound like a big deal,” aerospace engineer Tara Jochim from NASA said during a briefing on Wednesday. “You can snip your zip tie with scissors or whatever tool you have, let that zip tie fall to the ground, and put it in the trash. Unfortunately in space, we don’t like debris floating around the space station.”

Today astronauts took on a series of tasks ranging in difficulty from zip-tie-cutting to safely launching a piece of equipment into space, all while orbiting the planet at around 5 miles per second. NASA spokespeople called this spacewalk, along with at least three more in a planned series, one of the most complicated missions since the 2009 repair of the Hubble Space Telescope.

The goal this time is to fix a component of the Alpha Magnetic Spectrometer, an international particle physics experiment sponsored by the US Department of Energy and NASA, and extend its study of cosmic rays, dark matter and antimatter for another decade.

For the last four years, Jochim and her colleagues have been working closely with the AMS collaboration to plan how to safely replace an internal cooling system for AMS, a particle physics experiment attached to the outside of the ISS.

At first, they weren’t even sure astronauts Andrew Morgan and Luca Parmitano were going to be able to do it, Jochim said during the briefing. “Usually when you go out for a spacewalk, you’re working on a piece of hardware that was prepared…on the ground, for a spacewalk.”

The AMS experiment was designed and developed by an international team led by MIT physicist Samuel Ting and assembled at CERN starting in 2003. It was originally meant to run for three years without the need for intervention by the inhabitants of the ISS.

The detector consists of a series of components that record the identity, trajectory and momentum of subatomic particles zipping around the cosmos. Just as visible light allows astronomers to study distant stars and galaxies, these particles—called cosmic rays—enable physicists to study the far reaches of the universe. AMS also allows physicists to search for evidence of dark matter, an elusive material that has so far been observed only through its gravitational pull on visible matter.

In May 2011, the AMS experiment hitched a ride to ISS on the space shuttle Endeavor. Although the experiment was originally designed to run through 2014, it has already survived more than twice that long. Over its time on the ISS, AMS has collected data from more than 148 billion cosmic rays.

While the rest of the detector is still in tip-top shape, the pump for the internal cooling system of the tracking detector is no longer functioning properly. When this system is replaced, AMS should continue to collect data through 2030.

Because AMS was not designed to be repaired in space, Jochim and her colleagues had to think very carefully about how to remove a bulky debris shield, which has been protecting gas vessels that periodically refill a subdetector used to differentiate between different kinds of particles, and cut through its stainless-steel cooling pipes without creating safety risks for the astronauts.

“You’re creating sharp edges,” she said, “and when you’re inside a large balloon [of a spacesuit] yourself, you don’t want to come up against sharp things.”

Part of the solution was to develop a set of roughly 25 specialized space tools, to be stored in the ISS. The debris shield, however, did not get that courtesy.

“Due to [the debris shield’s] large size, it is not easy to put it back in the airlocks,” said lead spacewalk officer John Mularski during the briefing. “Jettison is the optimum choice.”

At 9:17 a.m. Eastern, astronaut Morgan carefully sent the debris shield out into space above the Pacific Ocean, west of Peru. At 11:16 a.m. Eastern, he released an inner cover made of carbon fiber while sailing over the South Atlantic.

In addition to removing the debris shield, Morgan and Parmitano installed handrails along the exterior of AMS—the astronauts’ equivalent of preparing to renovate a house by removing the roof and setting up scaffolding. They completed their planned tasks and even moved on to finish a few more before returning to the ISS.

In November and December, the astronauts are scheduled to perform three more spacewalks to install the new cooling system and connect it to AMS’s inner tracking detector. The astronauts plan to bring out the 350-pound device during their third AMS-related spacewalk.

“As you can imagine, [the astronauts] have been training for a couple years to go do this,” said spacewalk flight director Jeff Radigan during the briefing. “Any time you spend that much time getting ready for something, of course when the day comes you're more than prepared and excited to go make it happen; it's just been a fantastic road and a fantastic team.”