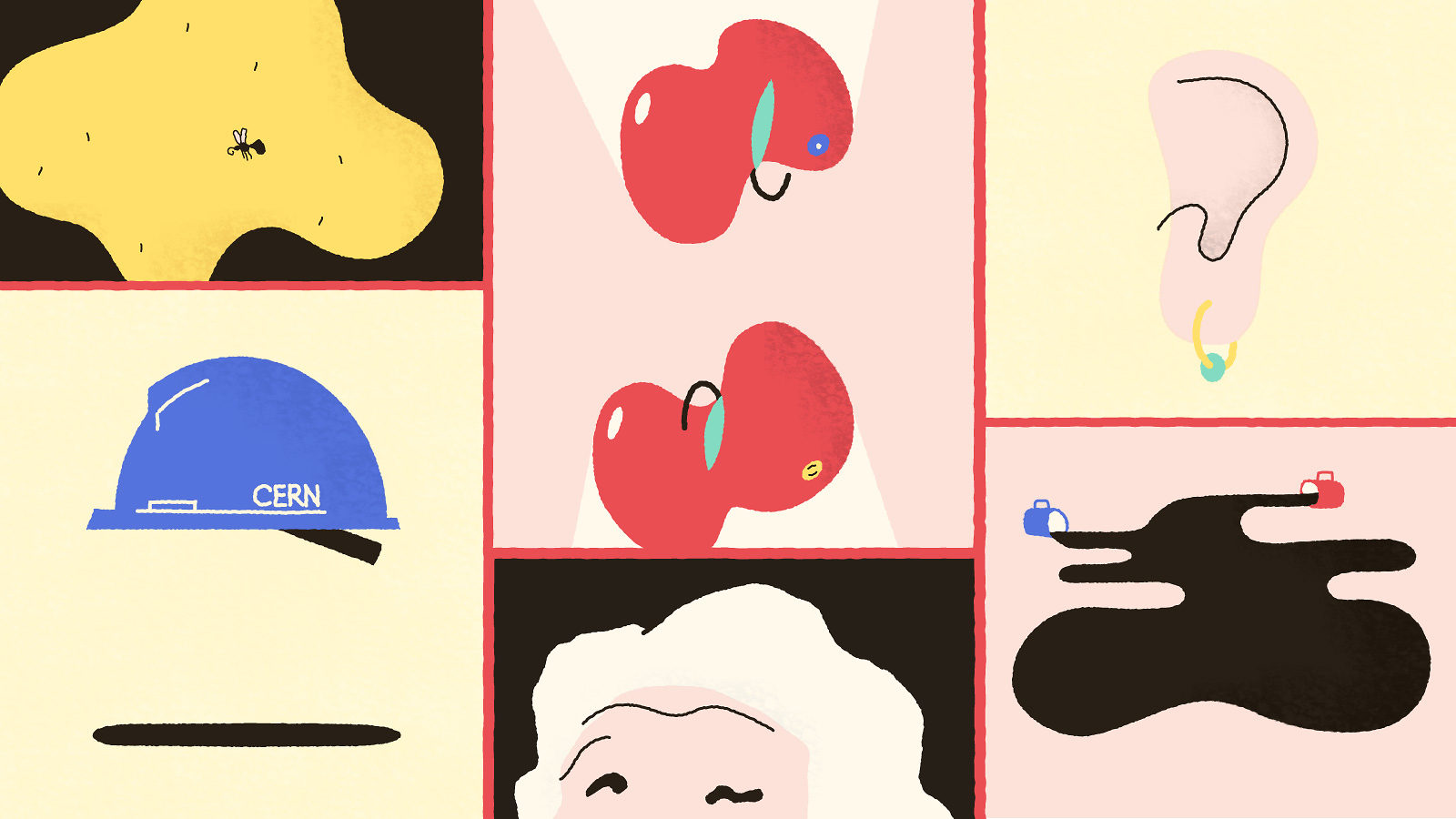 What is it like inside the LHC? Symmetry tackles some unconventional questions about the world’s highest energy particle accelerator.

The LHC accelerates beams of particles, usually protons, around and around a 17-mile ring until they reach 99.9999991 percent the speed of light. If you could watch this happening, what would you see?

The LHC ring is actually made up of both straight and curved sections. If you were watching protons fly through one of the straight sections, it would be totally dark. But as the protons pass through the LHC’s curved sections, the particles emit synchrotron radiation in the form of photons.

At low energies, the photons are generally in the infrared, but at a couple of particular points in the ring, special magnets called undulators cause visible light to be emitted.

During the acceleration process (the so-called ramp), the energy of protons increases, and the energy of the photons they emit also increases. Once the protons reach their maximum energy, most of the photons are in the ultraviolet range. If you looked in the beam pipe at that point, you wouldn’t be able to see anything, but you would get a pretty good sunburn.

What are space and time like for an LHC proton traveling at 99.9999991 percent the speed of light?

Two strange but well-known effects of moving at speeds that are a significant fraction of the speed of light are time dilation (moving clocks tick slowly) and length contraction.

To a proton travelling very close to the speed of light, time would appear to be passing normally. Proton time would seem strange only to an observer outside the LHC, for whom 1 second for the proton would appear to last about 2 hours.

What would seem strange from the proton’s point of view would be length. To the proton screaming around the LHC, the 17-mile circumference of the accelerator would appear to take up just about 13 feet.

Speaking of screaming, do the particles going around the LHC generate any sound? If you stuck your ear up against the beam pipe and listened to the protons colliding, what would you hear?

The particles in the LHC are traveling in a very good vacuum, and there’s no sound in a vacuum. But there is a recording of the proton beam smashing into the graphite core of the beam dump, where particles are sent when scientists want to stop circulating them in the accelerator, and they do land with a bang.

How powerful are the collisions in the LHC?

The LHC collides two beams of protons at a combined energy of 13 TeV, or 13 trillion electronvolts. An electronvolt is a unit of energy, like a calorie or a joule. Electronvolts are used when to talk about the energy of motion of really small things such as particles and atoms.

Knowing that, you might think 13 trillion electronvolts isn’t much. But what’s impressive is not so much the energy as the energy density: The energy of about 3 flying mosquitos is crammed into a space about 1 trillion times smaller across than one annoying insect. Nowhere else on Earth can we concentrate energy that much.

What if, instead of colliding protons at 13 TeV, you could collide apples at the same speed?

If you could do that, you’d get some real specialty apple juice—and a huge amount of energy: close to 1 x 1020Joules. That’s about the same order of magnitude as the energy that was released when a meteor hit Canada 39 million years ago. The impact of that collision resulted in the Haughton Crater, which is about 14 miles (23 kilometers) across.

The LHC can’t accelerate an apple, though. Right now, it can accelerate about 600 trillion protons at a time. That may sound like a lot, but altogether, it adds up to about 1 nanogram of matter—roughly the same mass as a single human cell.