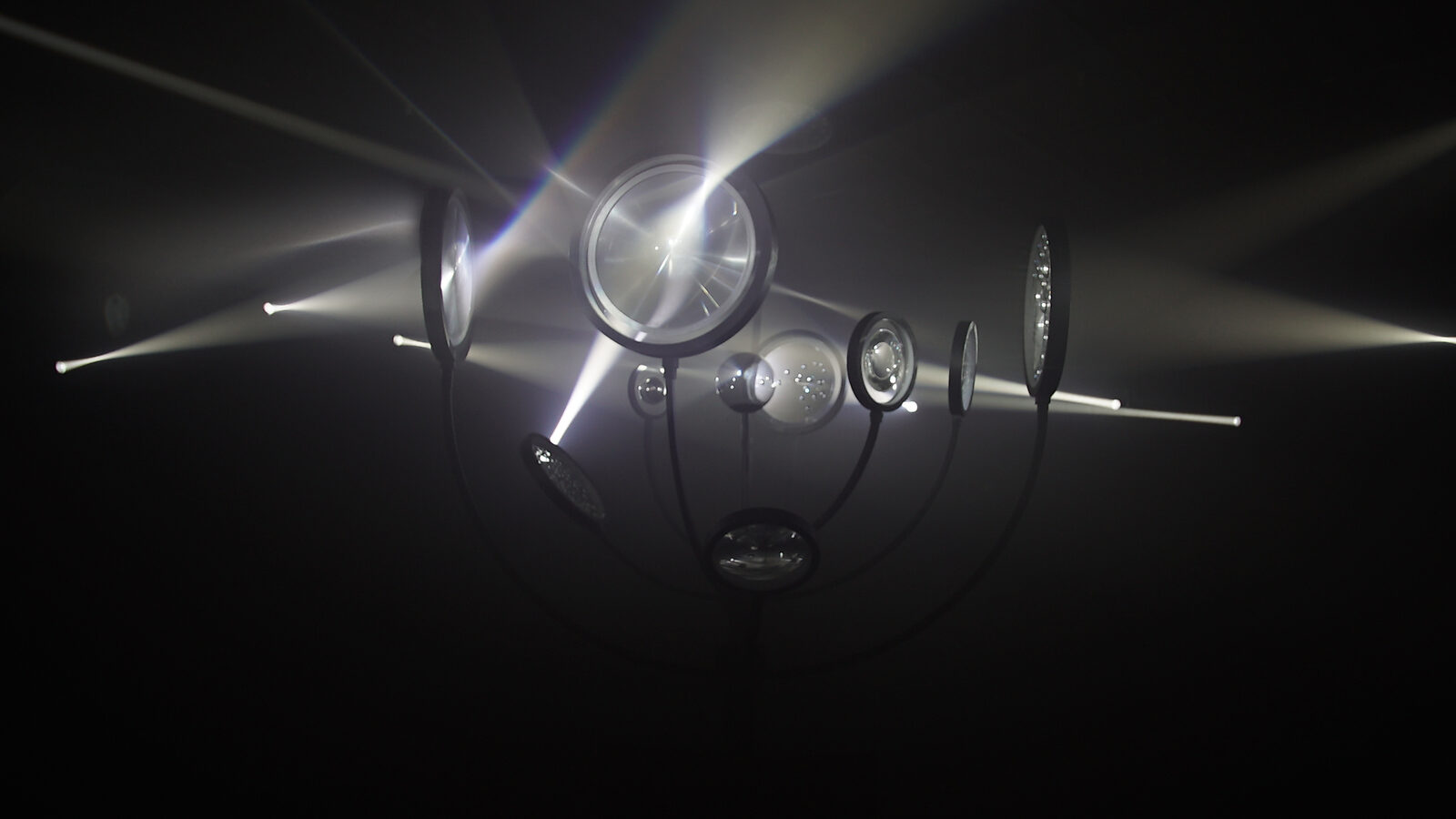 Visualizing dark matter is not an easy task. Although scientists have reason to believe the mysterious substance makes up about 27% of all the matter and energy in the universe, they still have yet to see it directly; they only know it exists because of its gravitational pull on the visible matter around it.

“Dark Distortions,” an art installation at the Science Gallery Dublin, aims to tackle the unseeable nature of dark matter by combining the powers of art and science. The gallery commisioned Dutch artist Thijs Biersteker of Woven Studios to team up with cosmologist Henk Hoekstra, a professor at Leiden University and a cosmology coordinator for the European Space Agency’s Euclid mission, to create an art installation that immerses people in the invisible world of dark matter.

“It’s one of those calls you love to get,” Biersteker says. “To be asked to make a piece about one of the most fascinating topics in the universe with one of the people that knows the most about it. I learned more about dark matter than I could have imagined, and we were able to share this knowledge with the world through art, making it not just relatable and understandable but also beautiful.”

Stepping into another world

“Dark Distortions,” which consists of a sculpture that takes up about 10 square feet of space, is designed to mimic the twisted motion of light as it passes through a dark-matter-riddled galaxy.

“In reality, these distortions are so tiny that you’d barely notice them, which is why you need a telescope like Euclid that can make enormous maps of the sky,” Hoekstra says. “But even if something isn’t exactly right conceptually, finding these analogies can really draw people in so that they start wondering about certain topics and wanting to learn more.”

The sculpture contains a constellation of lenses attached to monstrous, tentacle-like arms. As the structure rotates about in a dark, hazy room packed with pin spot lighting, the orbiting lenses bend the rays of light passing through them just as dark matter might.

“When you enter the exhibit, it’s really like stepping into another world,” says Cían Walsh, exhibitions producer at Science Gallery Dublin. “The room we created is very atmospheric and immersive—the visitor is transported to another world. The sculpture has a real presence in the room.”

“Dark Distortions” is the centerpiece of “INVISIBLE,” an exhibition at the Science Gallery Dublin that focuses on the importance of science, art and philosophy in “imagining the unseen and questioning the invisible.” The Science Gallery was founded at Trinity College Dublin in 2008, with the goal of bringing young minds, aged 15 to 25, to the intersection of art and science through galleries, touring exhibitions and educational programs to ignite their creativity and inspire an interest in STEM.

“It's all about engaging the public and bringing together artists and researchers, with the intention of communicating science to society in a digestible and relatable way,” Walsh says. “Having artists and researchers team up to create exhibits can demonstrate how beneficial the relationship between art and science can be to society, particularly in communicating complex themes and ideas. We want visitors to be inspired and to view the world in a way they have yet to imagine. It’s powerful to be a part of that process, and Science Gallery is really unparalleled globally in that sense”

The “INVISIBLE” exhibition was set to open to the public on March 12, but just hours away from launch, the gallery was shut down due to the ongoing coronavirus pandemic. Until the gallery reopened in July, people could only experience the exhibit virtually.

Once visitors were allowed back, the gallery had to make some changes to keep things as safe as possible. The gallery limited the number of people allowed in the room to view “Dark Distortions” to two or three at a time, giving it a much more personal and intimate feel. Originally, visitors would have worn headphones to hear music and a narration of the exhibit meant to provide more context. Starting in July, the sound played through speakers spread around the room, creating a more immersive experience that could be shared with the others in the room.

“I love the unexpected nature of the work,” Biersteker says. “The patterns in the room are continuously transforming. The lenses orbit differently each time, so the light effects are orchestrated in unique and ever-changing ways, making you really aware of the moment. You can see this when a group of people share the space and start to point out the elements they love, knowing they will be gone in a millisecond.”

Hoekstra adds that he hopes people will walk away from the exhibit with a newfound appreciation of both art and science.

“As scientists we’re trained to think about things a certain way, but artists can take that abstract picture and make it into something concrete,” Hoekstra says. “I think this exhibit really captures how you can see something that is invisible.”

The Science Gallery Dublin is closed to the public once more due to the pandemic, but those interested in visiting once it reopens or in taking a virtual tour can check out dublin.sciencegallery.com for more information.