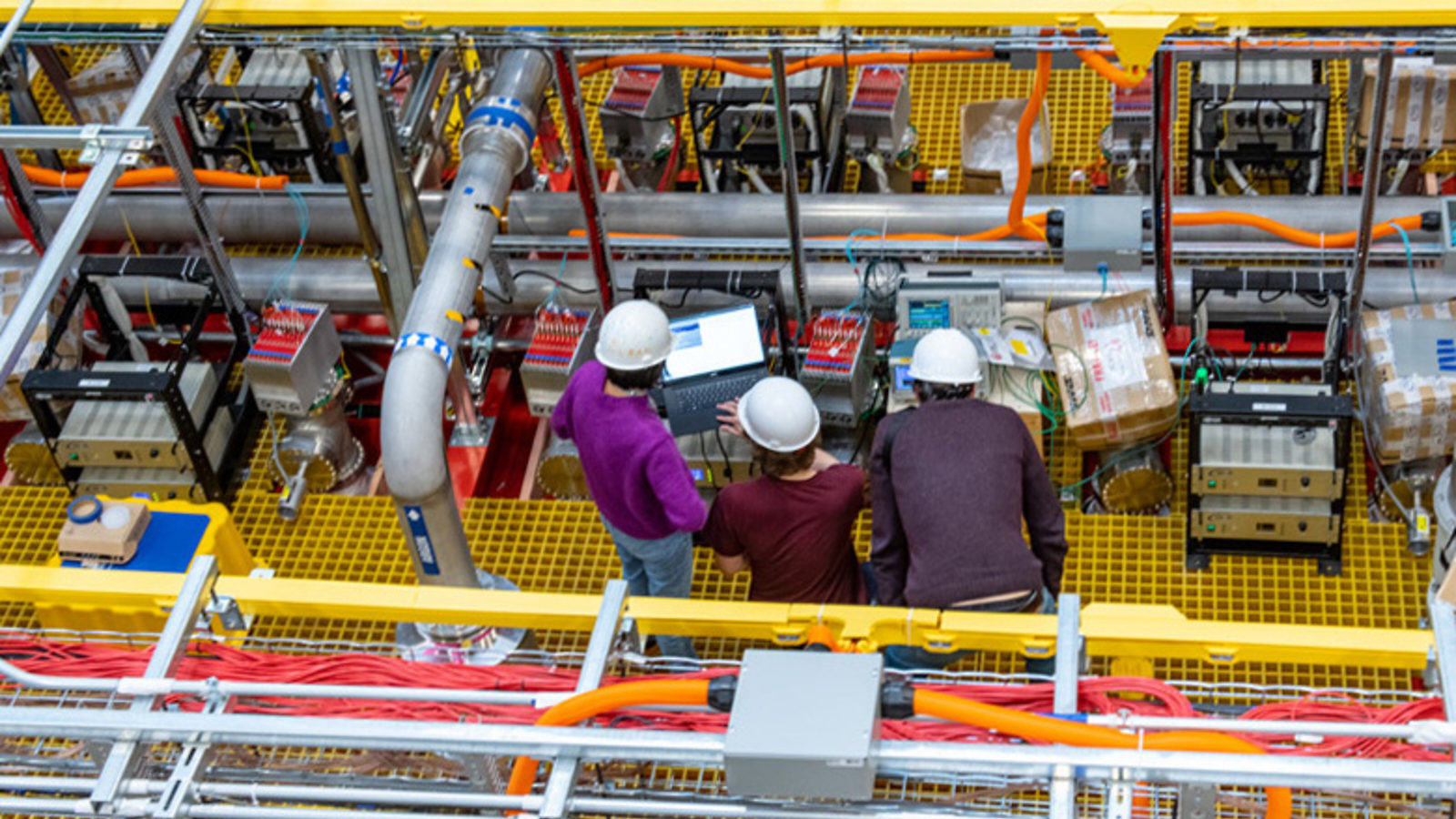 Argon. It’s all around us. It’s in the air we breathe, incandescent lights we read by and plasma globes many of us played with as children.

In liquid form, argon is also an inexpensive and effective target for neutrino physics experiments. On February 21, scientists at the US Department of Energy’s Fermi National Accelerator Laboratory began cooling down ICARUS—the largest particle detector in the lab’s Short-Baseline Neutrino Program—and filling it with 760 tons of liquid argon, moving ICARUS closer to operation and the search for a fourth type of neutrino.

“The Short-Baseline Neutrino Program is amazing because it will finally resolve longstanding anomalous results in neutrino measurements,” says Robert Wilson, deputy spokesperson of ICARUS and professor of physics at Colorado State University.

“Neutrinos are a fundamental and abundant component of our universe: We still know too little about them, and this keeps me very interested to continue searching their properties,” says Carlo Rubbia, Nobel laureate and ICARUS spokesperson.

Over 20 years ago, scientists at Los Alamos National Laboratory found more electron antineutrinos than they expected in their results from the Liquid Scintillator Neutrino Detector. In a follow-up experiment more than 10 years later, scientists on the MiniBooNE experiment at Fermilab observed a similar inconsistency and uncovered a new anomaly in their neutrino data.

Scientists wonder whether this was more than coincidence.

A fourth type of neutrino

It is well-established that the three known neutrino types—electron, muon and tau—oscillate, or change, into one another. To study these oscillations and how they happen, scientists need neutrinos to interact with something. For ICARUS, that substance is liquid argon.

“What if the neutrinos are oscillating into a neutrino that does not interact at all, not even a little bit like other neutrinos do?” Wilson said. “This is not a natural extension of neutrino theory, but it could explain the LSND and MiniBooNE results.”

Such a fourth type of neutrino, unlike the others, would not change into a complementary charged particle upon interaction in a detector. In fact, it wouldn’t interact at all. By quantum mechanics, however, this so-called sterile neutrino could still oscillate between neutrino types and alter the oscillation pattern that ICARUS will observe.

Discovery of a sterile neutrino would upend the Standard Model of subatomic particles and affect our understanding of how the universe has evolved.

From filling to beam

ICARUS’s optimal location, size and detector material make it uniquely sensitive to detecting neutrinos that would display this oscillation effect. If ICARUS scientists find more electron neutrinos in their muon-type neutrino beam than expected, they would at long last have concrete evidence of sterile neutrinos.

ICARUS’s measurements will also inform how long-baseline neutrino experiments collect and analyze data. For example, scientists’ experience on ICARUS will inform the much larger, international Deep Underground Neutrino Experiment, hosted by Fermilab. ICARUS’s liquid-argon detection technology will be adapted for DUNE, which will use 70,000 tons of liquid argon to study the three known neutrino types and how they change from one to another.

“ICARUS has come a long way from its conception and data-taking activity at the Gran Sasso Laboratory in Italy and is now approaching an new phase of data acquisition here at Fermilab. I am thrilled to see the enthusiasm of a younger generation of scientists now at work on this experiment,” Rubbia says.

It will take approximately eight weeks to fill ICARUS with liquid argon. Once the detector is filled, scientists will check its stability and the argon’s purity. Then, they will turn on power for the first time since ICARUS made its way to Fermilab across the Atlantic Ocean. They expect to see first particle tracks later this year.

Editor’s note: A version of this article was originally published by Fermilab.