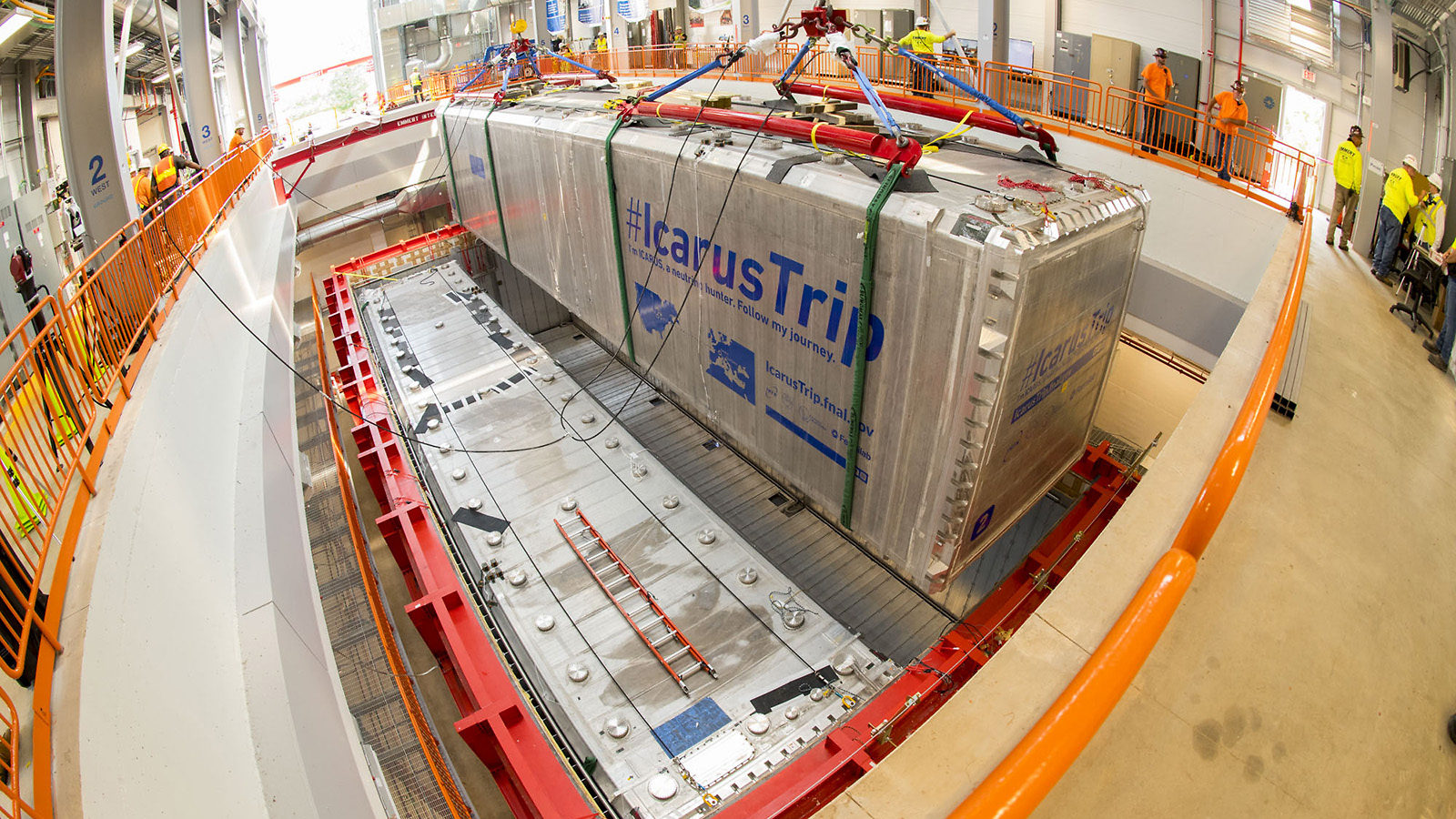 For four years, three laboratories on two continents have prepared the ICARUS particle detector to capture the interactions of mysterious particles called neutrinos at the US Department of Energy's Fermi National Accelerator Laboratory.

On August 14, the ICARUS detector moved into its new Fermilab home, a recently completed building that houses the large, 20-meter-long neutrino hunter. Filled with 760 tons of liquid argon to capture neutrino interactions, it is one of the largest particle detectors of its kind in the world.

It's also the final step in an international scientific handoff. From 2010 to 2014, ICARUS operated at the Italian Gran Sasso National Laboratory, run by the Italian National Institute for Nuclear Physics. Then the detector was sent to the European laboratory CERN. There, it was refurbished for its future life at Fermilab, outside Chicago. In July 2017, ICARUS completed its trans-Atlantic trip to the American laboratory.

"In the first part of its life, ICARUS was an exquisite instrument for the Gran Sasso program, and now CERN has improved it, bringing it in line with the latest technology," says CERN scientist and Nobel laureate Carlo Rubbia, who led the experiment when it was at Gran Sasso and currently leads the ICARUS collaboration. "I eagerly anticipate the results that come out of ICARUS in the Fermilab phase of its life."

Since 2017, Fermilab, working with its international partners, has been instrumenting the ICARUS building, getting it ready for the detector's final, short move.

"Having ICARUS settled in is incredibly gratifying. We've been anticipating this moment for four years," says scientist Steve Brice, who heads the Fermilab Neutrino Division. "We're grateful to all our colleagues in Italy and at CERN for building and preparing this sophisticated neutrino detector."

Neutrinos are famously fleeting. They rarely interact with matter: Trillions of the subatomic particles pass through us every second without a trace. To catch them in the act of interacting, scientists build detectors of considerable size. The more massive the detector, the greater the chance that a neutrino stops inside it, enabling scientists to study the elusive particles. ICARUS's 760 tons of liquid argon give neutrinos plenty of opportunity to interact. The interaction of a neutrino with an argon atom produces fast-moving charged particles. The charged particles liberate atomic electrons from the argon atoms as they pass by, and these tracks of electrons are drawn to planes of charged wires inside the detector. Scientists study the tracks to learn about the neutrino that kicked everything off.

Rubbia himself spearheaded the effort to make use of liquid argon as a detection material more than 25 years ago, and that same technology is being developed for the future Fermilab neutrino physics program.

"This is an exciting moment for ICARUS," says CERN scientist Claudio Montanari, who is the technical coordinator for ICARUS. "We've been working for months choreographing and carrying out all the steps involved in refurbishing and installing it. This move—it's like the curtain coming down after the entr'acte. Now we'll get to see the next act."

ICARUS is one part of the Fermilab-hosted Short-Baseline Neutrino program, whose aim is to search for a hypothesized but never-observed type of neutrino, known as a sterile neutrino. Scientists know of three neutrino types. The discovery of a fourth could reveal new physics about the evolution of the universe. It could also open an avenue for modeling dark matter, which constitutes 23 percent of the universe's mass.

ICARUS is the second of three Short-Baseline Neutrino detectors to be installed. The first, called MicroBooNE, began operating in 2015 and is currently taking data. The third, called the Short-Baseline Near Detector, is under construction. All use liquid argon.

Fermilab's powerful particle accelerators provide a plentiful supply of neutrinos and will send an intense beam of the particle through the three detectors—first SBND, then MicroBooNE, then ICARUS. Scientists will study the differences in data collected by the trio to get a precise handle on the neutrino's behavior.

"So many mysteries are locked up inside neutrinos," says Fermilab scientist Peter Wilson, Short-Baseline Neutrino coordinator. "It's thrilling to think that we might solve even one of them, because it would help fill in our frustratingly incomplete picture of how the universe evolved into what we see today." 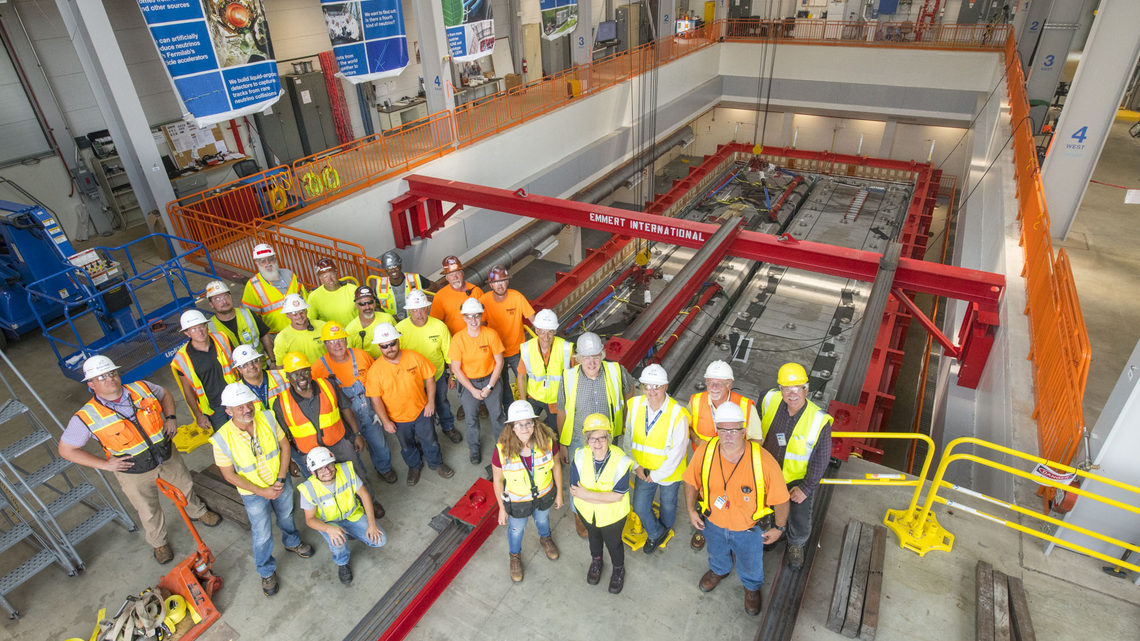 The three Short-Baseline Neutrino experiments are just one part of Fermilab's vibrant suite of experiments to study the subtle neutrino.

NOvA, Fermilab's largest operating neutrino experiment, studies a behavior called neutrino oscillation. The three neutrino types change character, morphing in and out of their types as they travel. NOvA researchers use two giant detectors spaced 500 miles apart—one at Fermilab and another in Ash River, Minnesota—to study this behavior.

Another Fermilab experiment, called MINERvA, studies how neutrinos interact with nuclei of different elements, enabling other neutrino researchers to better interpret what they see in their detectors.

"Fermilab is the best place in the world to do neutrino research," Wilson says. "The lab's particle accelerators generate beams that are chock full of neutrinos, giving us that many more chances to study them in fine detail."

The construction and operation of the three Short-Baseline Neutrino experiments are valuable not just for fundamental research, but also for the development of the international Deep Underground Neutrino Experiment (DUNE) and the Long-Baseline Neutrino Facility (LBNF), both hosted by Fermilab.

DUNE will be the largest neutrino oscillation experiment ever built, sending particles 800 miles from Fermilab to Sanford Underground Research Facility in South Dakota. The detector in South Dakota, known as the DUNE far detector, is mammoth: Made of four modules—each as tall and wide as a four-story building and almost as long as a football field—it will be filled with 70,000 tons of liquid argon, about 100 times more than ICARUS.

The knowledge and expertise scientists and engineers gain from running the Short-Baseline Neutrino experiments, including ICARUS, will inform the installation and operation of LBNF/DUNE, which is expected to start up in the mid-2020s.

"We're developing some of the most advanced particle detection technology ever built for LBNF/DUNE," Brice says. "In preparing for that effort, there's no substitute for running an experiment that uses similar technology. ICARUS fills that need perfectly."

Eighty researchers from five countries collaborate on ICARUS. The collaboration will spend the next year instrumenting and commissioning the detector. They plan to begin taking data in 2019.