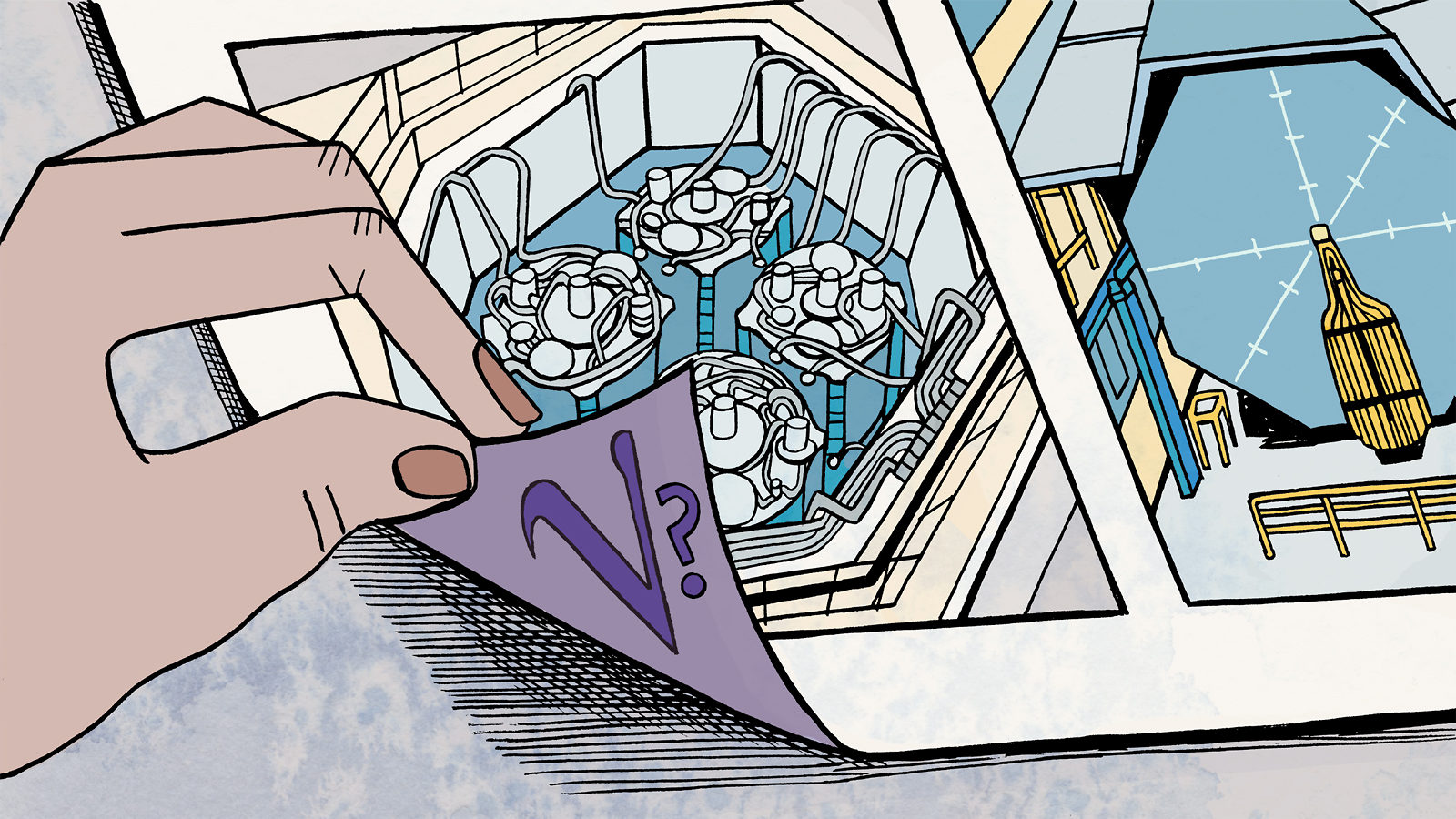 In the 1990s, the Liquid Scintillator Neutrino Detector (LSND) experiment at Los Alamos National Laboratory saw intriguing hints of an undiscovered type of particle, one that (as of yet) cannot be detected. In 2007, the MiniBooNE experiment at the US Department of Energy’s Fermi National Accelerator Laboratory followed up and found a similar anomaly.

Today scientists on two more neutrino experiments—the MINOS experiment at Fermilab and the Daya Bay experiment in China—entered the discussion, presenting results that limit the places where these particles, called sterile neutrinos, might be hiding.

“This combined result was a two-year effort between our collaborations,” says MINOS scientist Justin Evans of the University of Manchester. “Together we’ve set what we believe is a very strong limit on a very intriguing possibility.”

In three separate papers—two published individually by MINOS and Daya Bay and one jointly, all in Physical Review Letters—scientists on the two experiments detail the results of their hunt for sterile neutrinos.

Both experiments are designed to see evidence of neutrinos changing, or oscillating, from one type to another. Scientists have so far observed three types of neutrinos, and have detected them changing between those three types, a discovery that was awarded the 2015 Nobel Prize in physics.

What the LSND and MiniBooNE experiments saw—an excess of electron neutrino-like signals—could be explained by a two-step change: muon neutrinos morphing into sterile neutrinos, then into electron neutrinos. MINOS and Daya Bay measured the rate of these steps using different techniques.

MINOS, which is fed by Fermilab’s neutrino beam—the most powerful in the world—looks for the disappearance of muon neutrinos. MINOS can also calculate how often muon neutrinos should transform into the other two known types and can infer from that how often they could be changing into a fourth type that can’t be observed by the MINOS detector.

Daya Bay performed a similar observation with electron anti-neutrinos (assumed, for the purposes of this study, to behave in the same way as electron neutrinos).

The combination of the two experiments’ data (and calculations based thereon) cannot account for the apparent excess of neutrino-like signals observed by LSND. That along with a reanalysis of results from Bugey, an older experiment in France, leaves only a very small region where sterile neutrinos related to the LSND anomaly could be hiding, according to scientists on both projects.

“There’s a very small parameter space left that the LSND signal could correspond to,” says Alex Sousa of the University of Cincinnati, one of the MINOS scientists who worked on this result. “We can’t say that these light sterile neutrinos don’t exist, but the space where we might find them oscillating into the neutrinos we know is getting narrower.”

Both Daya Bay and MINOS’ successor experiment, MINOS+, have already taken more data than was used in the  analysis here. MINOS+ has completely analyzed only half of its collected data to date, and Daya Bay plans to quadruple its current data set. The potential reach of the final joint effort, says Kam-Biu Luk, co-spokesperson of the Daya Bay experiment, “could be pretty definitive.”

The IceCube collaboration, which measures atmospheric neutrinos with a detector deep under the Antarctic ice, recently conducted a similar search for sterile neutrinos and also came up empty.

All of this might seem like bad news for fans of sterile neutrinos, but according to theorist André de Gouvea of Northwestern University, the hypothesis is still alive.

Sterile neutrinos are “still the best new physics explanation for the LSND anomaly that we can probe, even though that explanation doesn’t work very well,” de Gouvea says. “The important thing to remember is that these results from MINOS, Daya Bay, Ice Cube and others don’t rule out the concept of sterile neutrinos, as they may be found elsewhere.”

Searches for sterile neutrinos have focused on the LSND neutrino excess, de Gouvea says, because it provides a place to look. If that particular anomaly is ruled out as a key to finding these nigh-undetectable particles, then they could be hiding almost anywhere, leaving no clues. “Even if sterile neutrinos do not explain the LSND anomaly, their existence is still a logical possibility, and looking for them is always interesting,” de Gouvea says.

Scientists around the world are preparing to search for sterile neutrinos in different ways.

Fermilab is preparing a three-detector suite of short-baseline experiments dedicated to nailing down the cause of both the LSND anomaly and an excess of electrons seen in the MiniBooNE experiment. These liquid-argon detectors will search for the appearance of electron neutrinos, a method de Gouvea says is a more direct way of addressing the LSND anomaly. One of those detetors, MicroBooNE, is specifically chasing down the MiniBooNE excess.

Scientists at Oak Ridge National Laboratory are preparing the Precision Oscillation and Spectrum Experiment (PROSPECT), which will search for sterile neutrinos generated by a nuclear reactor. CERN’s SHiP experiment, which stands for Search for Hidden Particles, is expected to look for sterile neutrinos with much higher predicted masses.

Obtaining a definitive answer to the sterile neutrino question is important, Evans says, because the existence (or non-existence) of these particles might impact how scientists interpret the data collected in other neutrino experiments, including Japan’s T2K, the United States’ NOvA, the forthcoming DUNE, and other future projects. DUNE in particular will be able to look for sterile neutrinos across a broad spectrum, and evidence of a fourth kind of neutrino would enhance its already rich scientific program.

“It’s absolutely vital that we get this question resolved,” Evans says. “Whichever way it goes, it will be a crucial part of neutrino experiments in the future.”