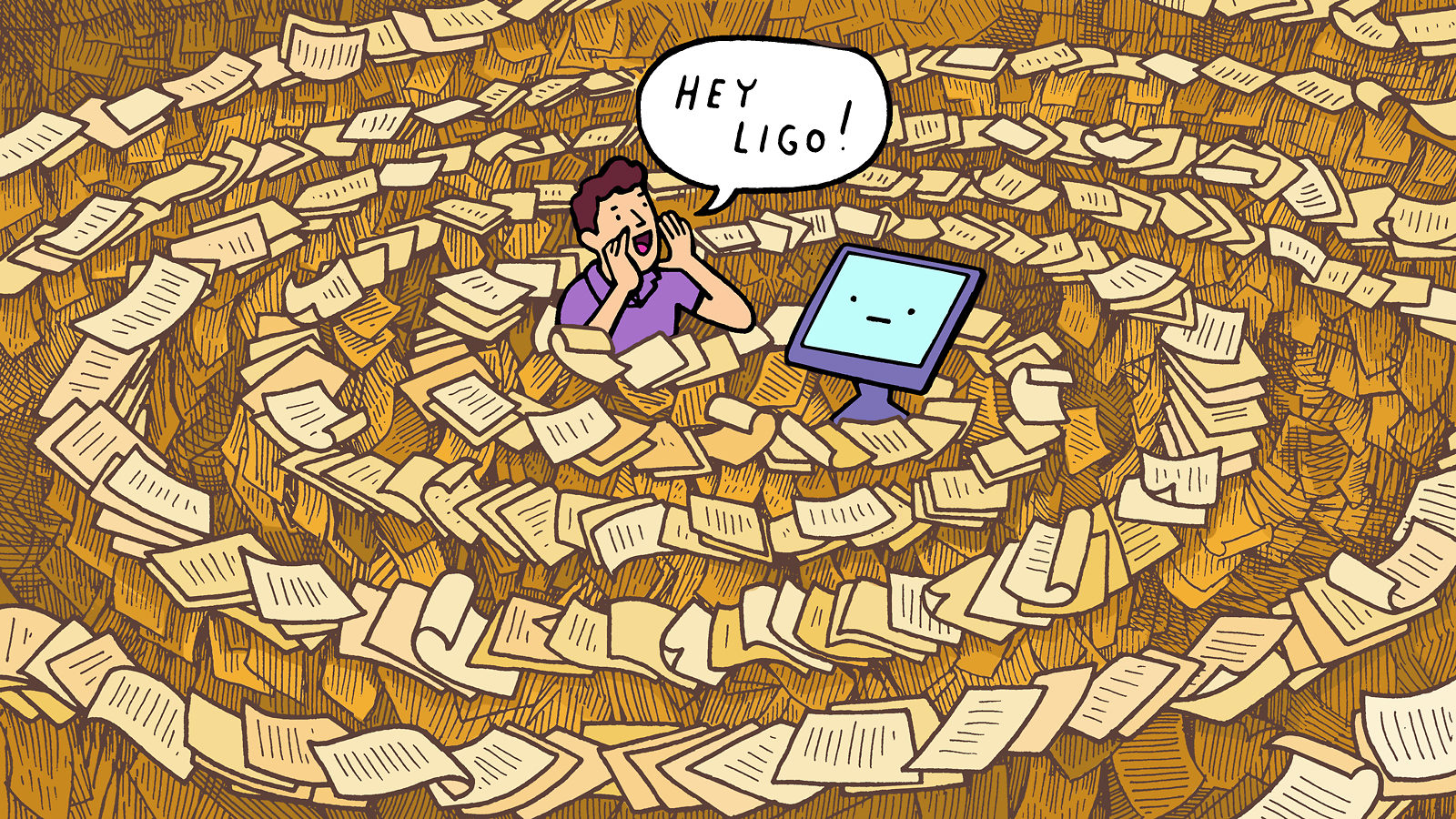 The Laser Interferometer Gravitational-Wave Observatory has a new digital assistant.

In October 2016, research fellow Nikhil Mukund was spending his Saturday evening trying to find the source of some noise cluttering the data from the Laser Interferometer Gravitational-Wave Observatory detector in Livingston, Louisiana.

The LIGO collaboration—which that year had announced both the first and second ever detections of gravitational waves—then consisted of more than 1000 scientists, working on two detectors in two different US states. LIGO scientists were also working closely with about 250 additional scientists on another collaboration, Virgo, who operate a similar detector in Pisa, Italy. Mukund knew that, chances were, he wasn’t the first one to face this particular problem.

Mukund, a graduate student at the Inter-University Centre for Astronomy and Astrophysics in Pune, India, was a visiting fellow at LIGO Livingston. In his 10 months at the facility, he noticed he also wasn’t the only one trying to solve problems that had already been solved. Mukund began to think about a way to help people avoid spending their weekends combing through logbooks in search of answers.

“I was wondering if it were possible to generate some sort of knowledge engine, something like IBM Watson, but for LIGO,” Mukund says. “If you ask some questions about the interferometer, [the engine] could intelligently come up with some answers that could help someone in debugging an issue or in knowing more about the detector.”

So, along with a group of seven other scientists, he built it. It took them just a couple of months to get a prototype up and running.

It’s part Google, part Siri; it’s called Hey LIGO. It lets you search through logbook records from both LIGO locations, Hanford, Washington and Livingston, Louisiana—in addition to other experiments. And you can talk to it; click the microphone icon and tell Hey LIGO what you’re looking for. That is, if you speak the lingo.

“We had to make a dictionary to handle all of the technical terms,” says Arun Aniyan, a post-doctoral researcher at the Square Kilometer Array (SKA) in South Africa and co-developer of Hey LIGO. “We had to get back to the LIGO designers and be like, ‘Hey, what does this mean?’ and, ‘Is this relevant?’”

Members of the public can use Hey LIGO; they just might be disappointed if they’re looking for the kind of quippy, vocalized replies we’ve come to expect from our digital assistants. Hey LIGO is more likely to spit out links to technical reports and schematics. But for researchers, that’s just fine.

“I’ve found that Hey LIGO is most useful when you aren’t exactly sure what you are looking for,” says Carl Blair, a Caltech post-doctoral researcher at LIGO Livingston.

When the website first launched, LIGO Hanford and Livingston were the only institutions taking part. But once scientists started to get word of it at meetings like the 2017 LIGO Virgo Collaboration meeting and the 2017 American Physical Society conference, Virgo and GEO600 gravitational-wave observatories jumped on the bandwagon.

Hey LIGO is hoping to expand its efforts to reach other large astronomical institutions like the soon-to-come-online LIGO-India and the precursor to the SKA, the MeerKAT telescope. In the hopes of making the website even more intelligent and beneficial, the creators plan on adding in subdivisions for different department and the ability to ask Hey LIGO if the problem was actually solved based on the notes in the records.

The code for this search engine is open-source, so anyone can take the code and repurpose it for their own uses. Maybe the next version will learn some puns.