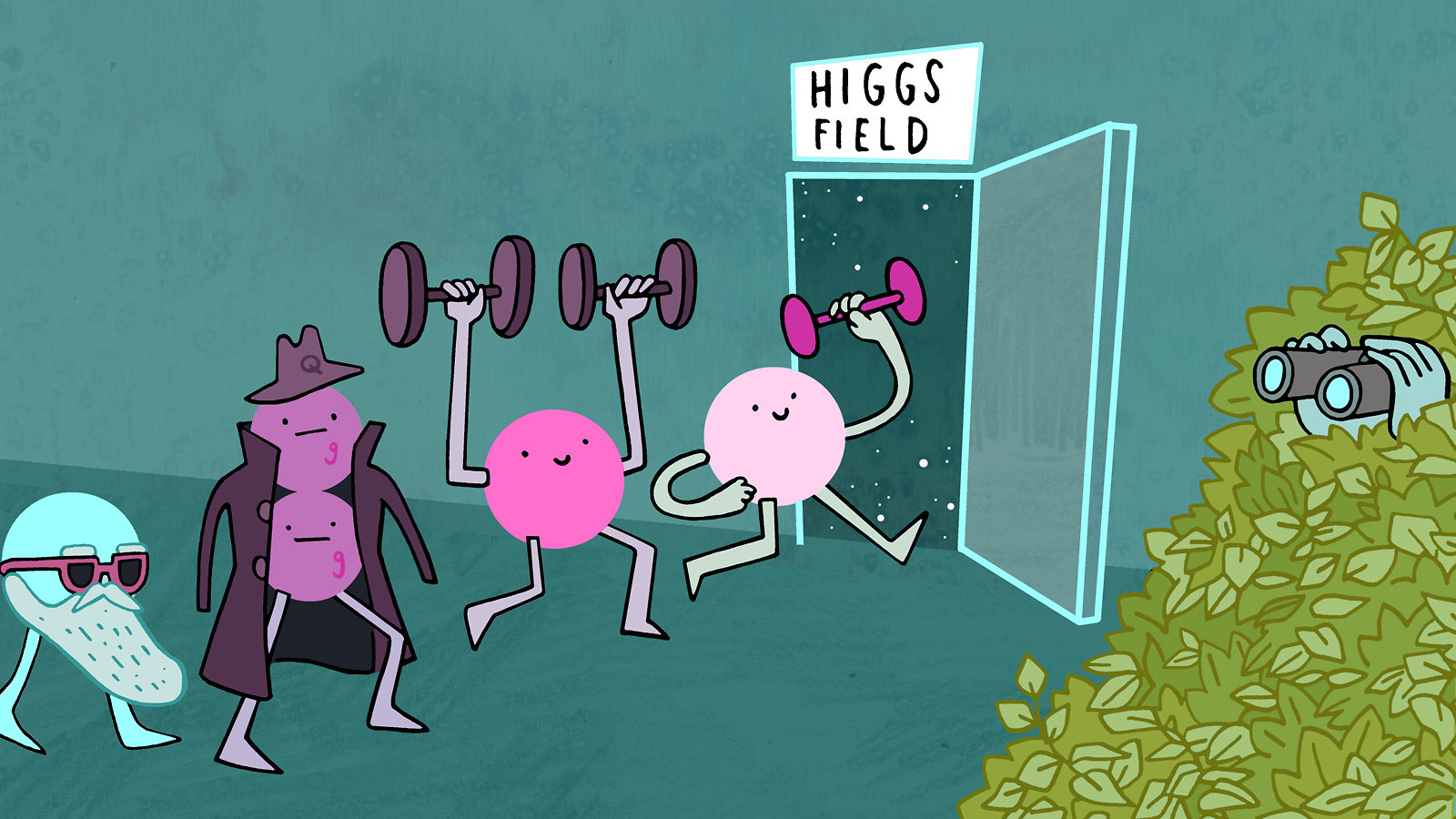 Einstein’s most famous theory, often written as E=mc2, tells us that energy and matter are two sides of the same coin.

The Large Hadron Collider uses this principle to convert the energy contained within ordinary particles into new particles that are difficult to find in nature—particles like the Higgs boson, which is so massive that it almost immediately decays into pairs of lighter, more stable particles.

But not just any collision can create a Higgs boson.

“The Higgs is not just created from a ‘poof’ of energy,” says Laura Dodd, a researcher at the University of Wisconsin, Madison. “Particles follow a strict set of laws that dictate how they can form, decay and interact.”

One of these laws states that Higgs bosons can be produced only by particles that interact with the Higgs field—in other words, particles with mass.

The Higgs field is like an invisible spider’s web that permeates all of space. As particles travel through it, some get tangled in the sticky tendrils, a process that makes them gain mass and slow down. But for other particles—such as photons and gluons—this web is completely transparent, and they glide through unhindered.

Given enough energy, the particles wrapped in the Higgs field can transfer their energy into it and kick out a Higgs boson. Because massless particles do not interact with the Higgs field, it would make sense to say that they can’t create a Higgs. But scientists at the LHC would beg to differ.

The LHC accelerates protons around its 17-mile circumference to just under the speed of light and then brings them into head-on collisions at four intersections along its ring. Protons are not fundamental particles, particles that cannot be broken down into any smaller constituent pieces. Rather they are made up of gluons and quarks.

As two pepped-up protons pass through each other, it’s usually pairs of massless gluons that infuse invisible fields with their combined energy and excite other particles into existence—and that includes Higgs bosons.

“We know that particles follow strict rules about who can talk
to whom.”

How? Gluons have found a way to cheat.

“It would be impossible to generate Higgs bosons with gluons if the collisions in the LHC were a simple, one-step processes,” says Richard Ruiz, a theorist at Durham University’s Institute for Particle Physics Phenomenology.

Gluons can momentarily “launder” their energy to a virtual particle, which converts the gluon’s energy into mass. If two gluons produce a pair of virtual top quarks, the tops can recombine and  annihilate into a Higgs boson.

To be clear, virtual particles are not stable particles at all, but rather irregular disturbances in quantum mechanical fields that exist in a half-baked state for an incredibly short period of time. If a real particle were a thriving business, then a virtual particle would be a shell company.

Theorists predict that about 90 percent of Higgs bosons are created through gluon fusion. The probability of two gluons colliding, creating a top quark-antitop pair and propitiously producing a Higgs is roughly one in 2 billion. However, because the LHC generates approximately 1 billion proton collisions every second, the odds are in scientists’ favor and the production rate for Higgs bosons is roughly one every one to two seconds.

Shortly after the Higgs discovery, scientists were mostly focused on what happens to Higgs bosons after they decay, according to Dodd.

“But now that we have more data and a better understanding of the Higgs, we’re starting to look closer at the collision byproducts to better understand how frequently the Higgs is produced through the different mechanisms,” she says.

The Standard Model of particle physics predicts that almost all Higgs bosons are produced through one of four possible processes. What scientists would love to see are Higgs bosons being created in a way that the Standard Model of particle physics does not predict, such as in the decay of a new particle. Breaking the known rules would show that there is more going on than physicists previously understood.

“We know that particles follow strict rules about who can talk to whom because we’ve seen this time and time again during our experiments,” Ruiz says. “So now the question is, what if there is a whole sector of undiscovered particles that cannot communicate with our standard particles but can interact with the Higgs boson?”

Scientists are keeping an eye out for anything unexpected, such as an excess of certain particles radiating from a collision or decay paths that occur more or less frequently than scientists predicted. These indicators could point to undiscovered heavy particles morphing into Higgs bosons.

At the same time, to find hints of unexpected ingredients in the chain reactions that sometimes make Higgs bosons, scientists must know very precisely what they should expect.

“We have fantastic mathematical models that predict all this, and we know what both sides of the equations are,” Ruiz says. “Now we need to experimentally test these predictions to see if everything adds up, and if not, figure out what those extra missing variables might be.”