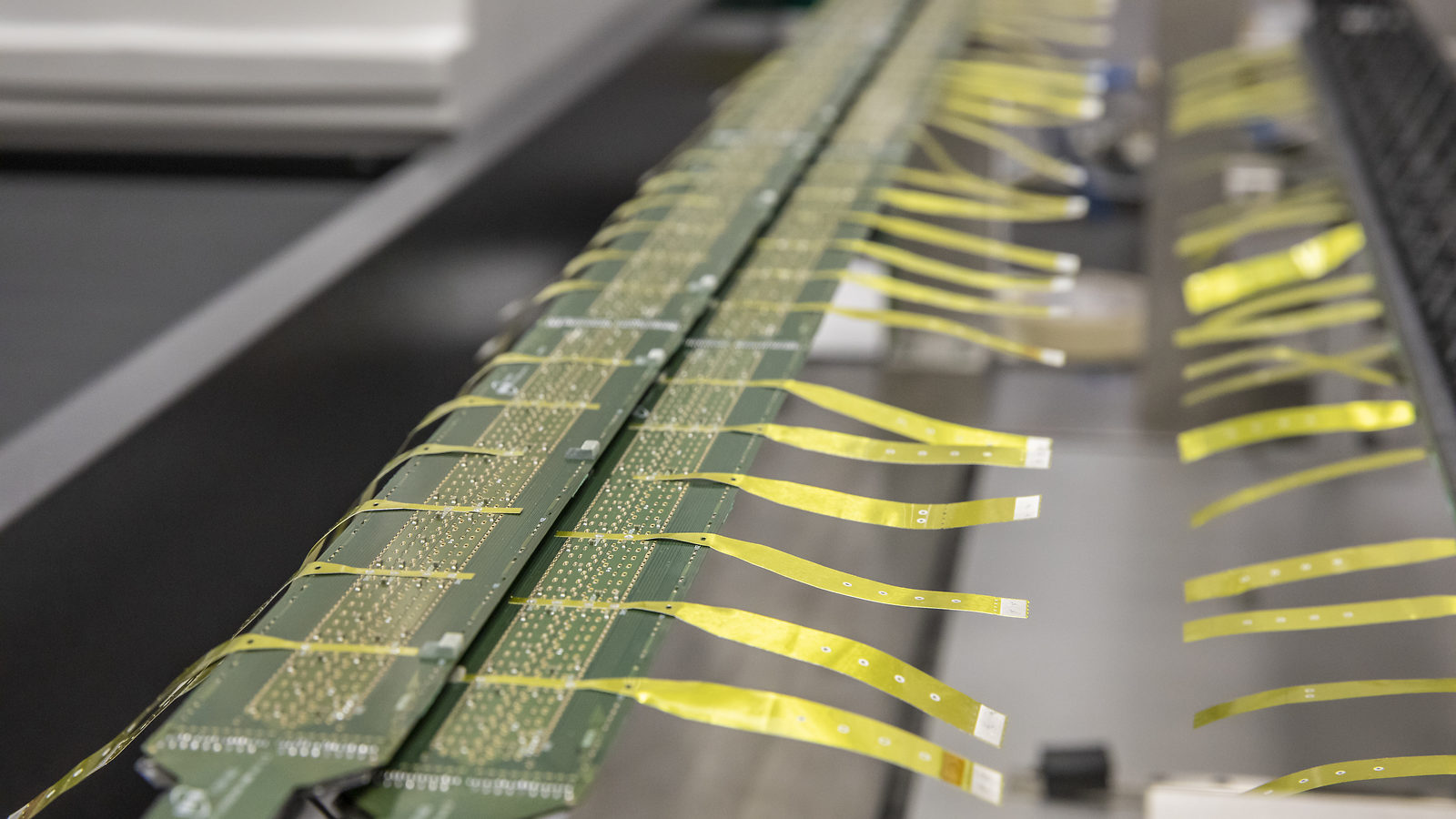 You may have observed airplane passengers accompanied by pets or even musical instruments on flights. But have you ever been seated next to a particle detector?

For more than a year, a small team at the US Department of Energy’s Lawrence Berkeley National Laboratory has been working to assemble, test and transport detector pieces for an upgrade of the ALICE detector array at the Large Hadron Collider at CERN laboratory in Europe.

The Berkeley Lab team’s solution to ensuring that each of these carefully assembled, delicate pieces gets from Point A to Point B intact: Treat them as travel companions.

ALICE, a nuclear physics experiment, is designed to collide high-energy lead ions with one another and with protons to explore an exotic state of superhot matter known as quark-gluon plasma that is thought to have existed in the early universe.

Berkeley Lab is one of five sites around the globe that is building detector panels (called “staves”) for the upgrade project, which will improve the performance of the ALICE detector’s inner tracking system—including its resolution to take snapshots of particle collisions, its durability and data-collection speed.

Nuclear physics researchers at Berkeley Lab take turns in transporting four long detector staves at a time in a custom-built clear container equipped with a shoulder strap. When loaded, the meter-long container weighs about 25 pounds. The staves are stacked with sequences of silicon chips and related circuitry and power components.

Each stave the Berkeley Lab team is responsible for has eight sensor modules, and each module is equipped with 14 sensors, for a total of 112 sensors per stave. 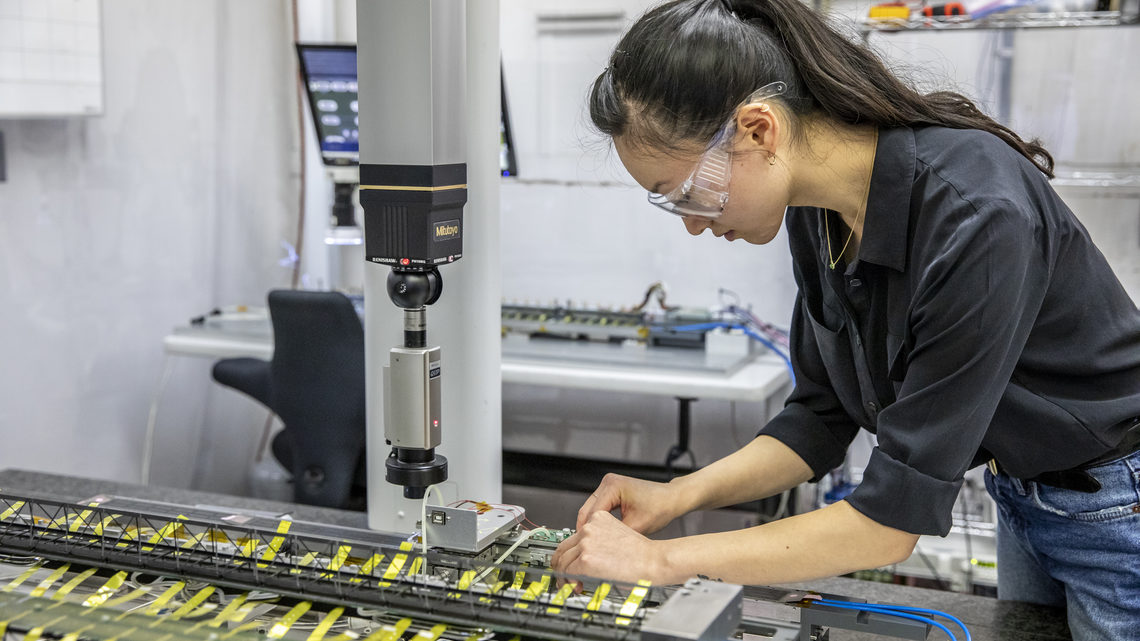 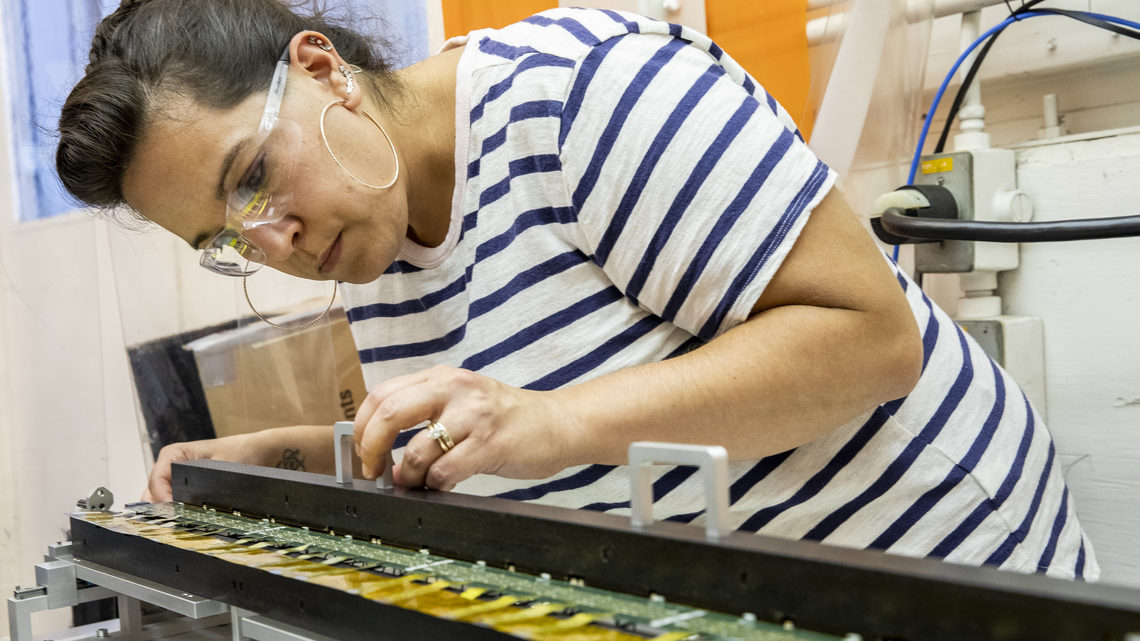 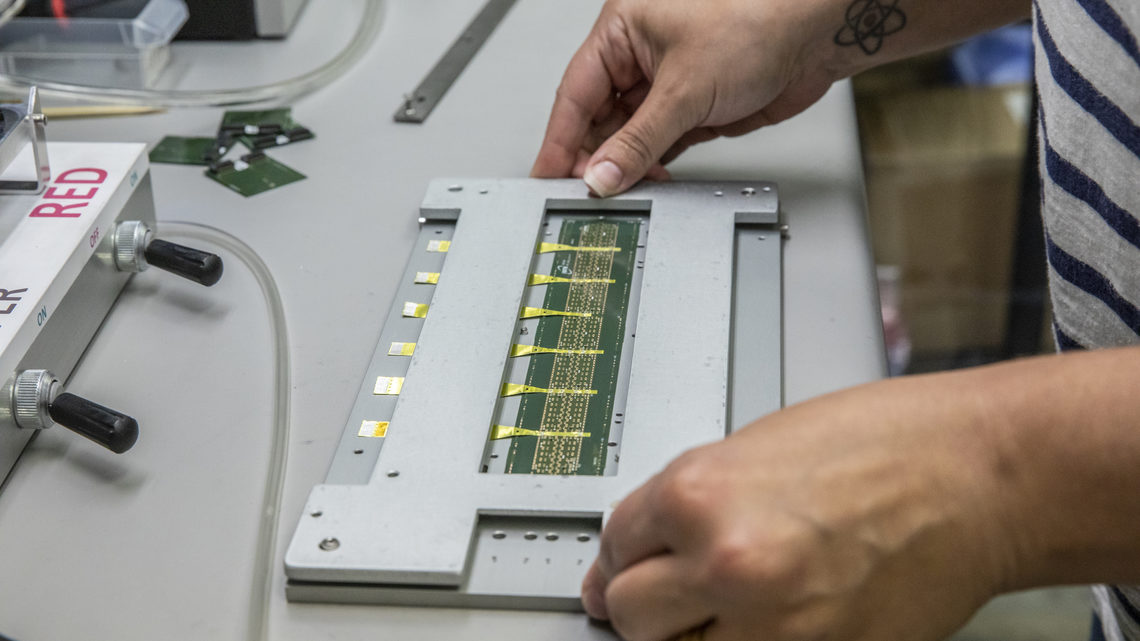 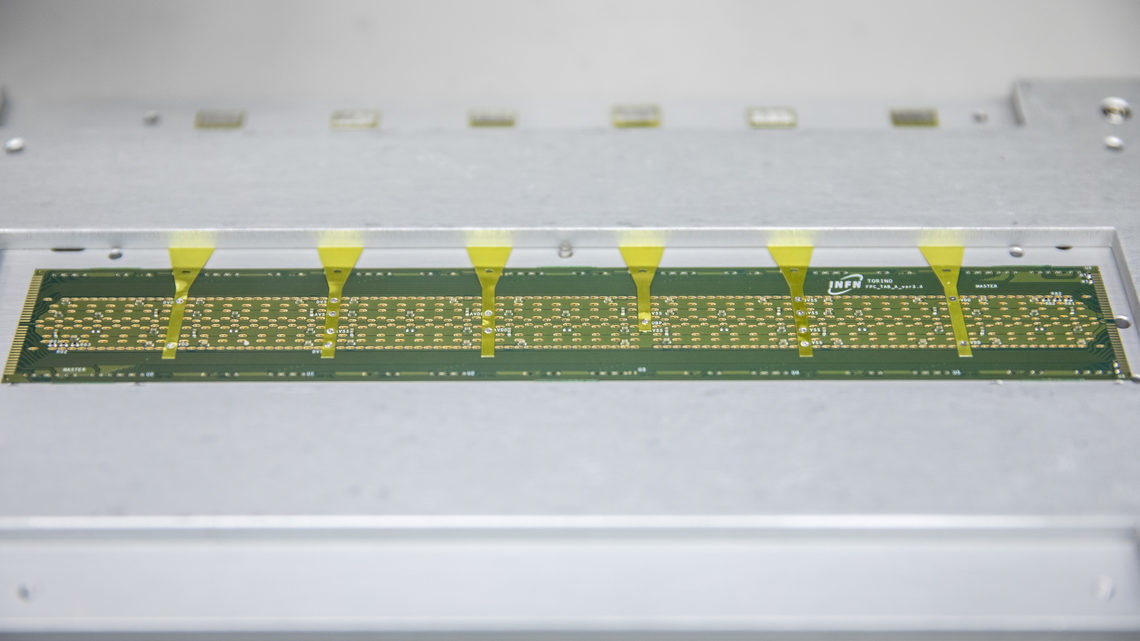 These silicon chip components are prepared for placement on a detector stave. 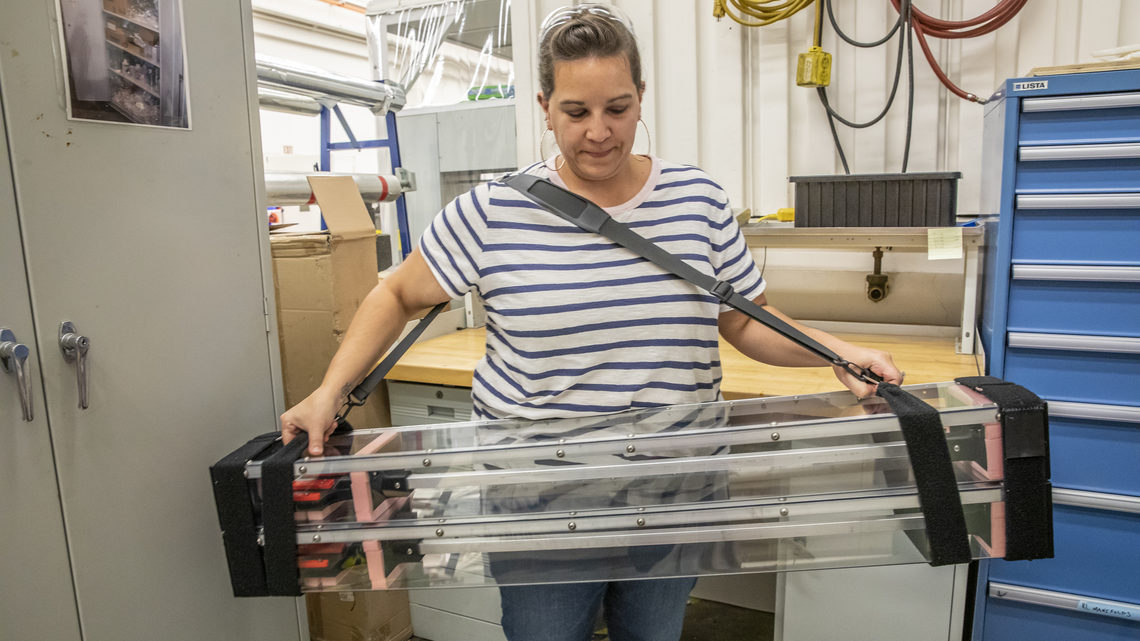 Nicole Apadula holds a custom-built carrying case designed for four detector staves. The case is hand-carried aboard commercial flights to ensure safe transport of the detector components to CERN laboratory in Europe.

This seat is taken

“We ended up buying seats on commercial flights for them because there is no other reliable way to get them there,” says Leo Greiner, a staff scientist in Berkeley Lab’s Nuclear Science Division who leads the team working on the ALICE detector upgrade components.

The team had used mechanical models of the detector modules to see how they would hold up in an airplane’s cargo hold, and they didn’t fare well: The units were visibly damaged, with some parts breaking off.

“It was pretty clear the transportation couldn’t happen in the way we originally envisioned,” Greiner says. So he researched the best way to get the staves inside the cabin—a more protected environment. The rules for purchasing a seat for the staves are similar to those for expensive musical instruments that musicians want to hand-carry onto the plane, he says.

The clear, Berkeley Lab-built carrying case is designed for ease of airport security inspections, and airport X-ray scans are not a problem as the detector components are designed to withstand far more intense radiation.

Once aboard the plane, researchers request a seatbelt extension to safely buckle the carrying case into the adjoining seat. Their usual route is to fly to Newark or Washington, DC from the San Francisco Bay Area, and then to connect to an international flight to Geneva, Switzerland. The round trip usually involves two full days of travel and two days at CERN to check for any damage to the components.

Members of the Berkeley Lab team have completed about 14 of these trips over the past year, with the last trip scheduled for mid-October.

The unusual carry-ons are quite a conversation starter, Greiner says.

“It’s the most fantastic outreach I’ve ever done,” he says. “Everyone has questions.”

Nikki Apadula, a project scientist in the Nuclear Science Division and a member of the ALICE team who has participated in the detector excursions, says, “I spent an entire trip to Newark using the back of the seat to explain what particles do in the detector.”

Apadula says that the tall travel containers can be cumbersome at times. “The fact that these things are a meter long—it’s just awkward. It’s almost as tall as me.”

Other members of the Berkeley Lab’s ALICE detector upgrade team, including research assistants Erica Zhang and Winston DeGraw, who both began working on the project as undergrads, have been the most frequent flyers on the detector trips.

The Berkeley Lab team is contributing 60 detector staves for the middle layers of ALICE’s upgraded outer-barrel detector, the largest contribution by a US lab.

The completed detector will have seven concentric layers that will hold a total of 24,000 silicon sensors for detecting particle interactions. It is scheduled for installation in March 2020, and will be operational in early 2021.

Detector assembly at Berkeley Lab was conducted in a specially constructed, plastic-walled clean room environment. Researchers carefully measured and glued eight detector modules to each stave, with accuracy typically measured in tens of microns, or tens of millionths of a meter.

The staves feature tubes that allow cool water to circulate along their length and prevent overheating, and all of the materials—down to the glue that affixes the detector modules—must be tested to ensure they can withstand the detector environment.

Each stave features a wedge-shaped carbon-fiber support along its length, and aluminum electrical components rather than copper, to provide better tracking resolution to capture the particle interactions while withstanding the barrage of radiation produced in particle collisions. In the early stages of the project the Berkeley Lab team used powerful charged-particle beams at Berkeley Lab’s 88-Inch Cyclotron to test the durability of the detector materials, Greiner notes.

The detectors in the upgrade are based on a monolithic pixel detector technology—an earlier generation of this type of detector was used for the STAR (Solenoidal Tracker at RHIC) detector at Brookhaven National Laboratory’s Relativistic Heavy Ion Collider (RHIC). Berkeley Lab has particular expertise in this type of detector, Greiner notes, and contributed to early R&D.

The ALICE upgrade detectors are designed for a longer life span, can process signals about 10 times faster than earlier detectors, and have an individual pixel size of about 30 microns. The improved resolution will allow researchers to better differentiate particles produced in the initial lead nuclei collisions from those that branch out from the particle decays that follow these initial interactions.

Other assembly sites for the new detectors are in China, England, France, Italy, the Netherlands and Korea. The ALICE collaboration numbers about 1500 scientists from over 100 physics institutes in 30 nations. Berkeley Lab participation in ALICE is supported by the US DOE Office of Science’s Office of Nuclear Physics.