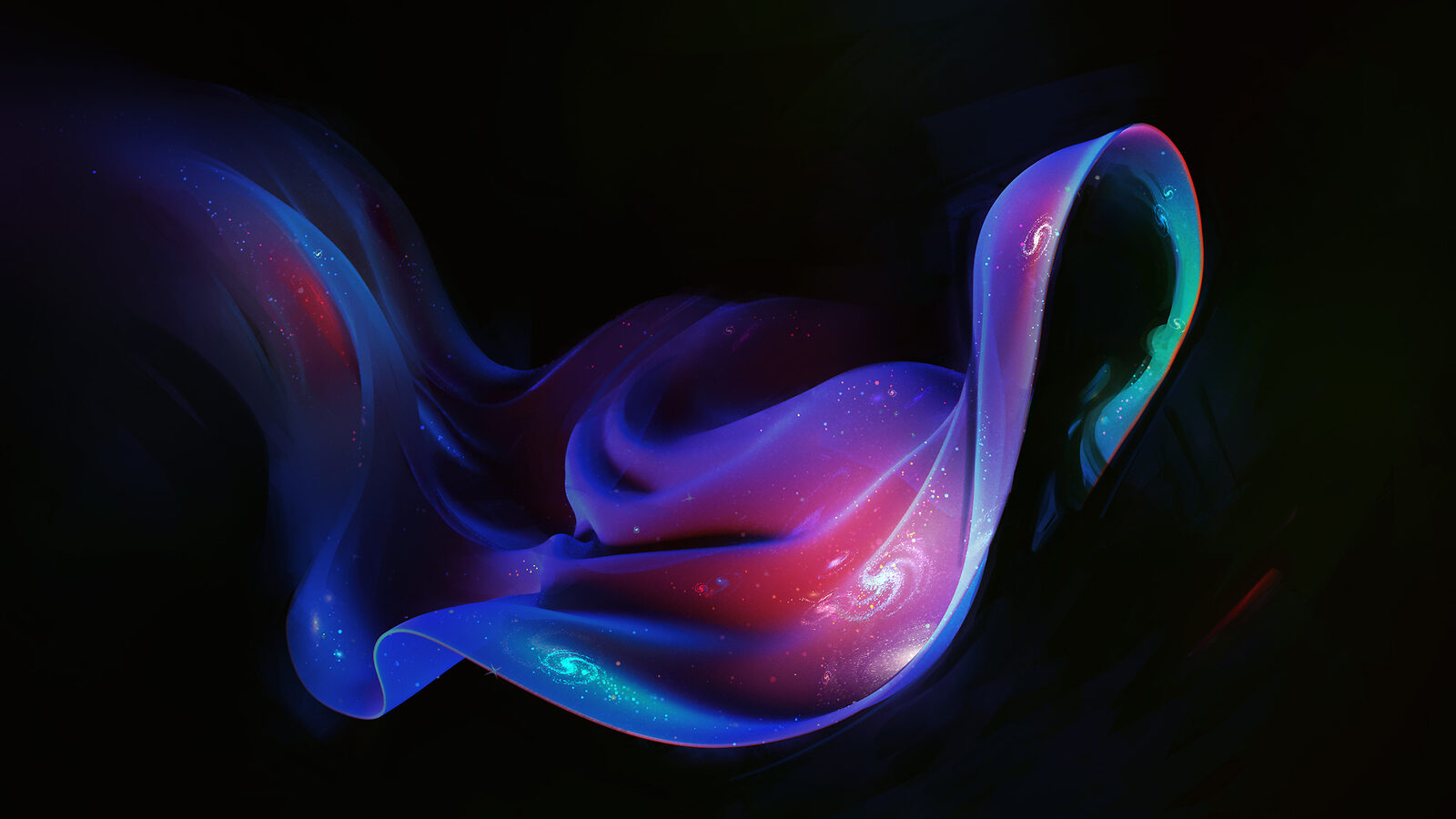 On Christmas morning of 2021, an Ariane 5 CEA rocket blasted off from Kourou, French Guiana. It carried with it the largest and most sophisticated space telescope ever built: the James Webb Space Telescope.

Since then, JWST has reached its orbit about 1 million miles from Earth, unfurled its tennis-court-sized sunshield, and aligned its 18 hexagonal mirror segments. The telescope’s first images are expected by summer.

Over the next decade, JWST will make cutting-edge observations to help scientists answer myriad outstanding questions in astronomy—including questions about the nature of dark matter. 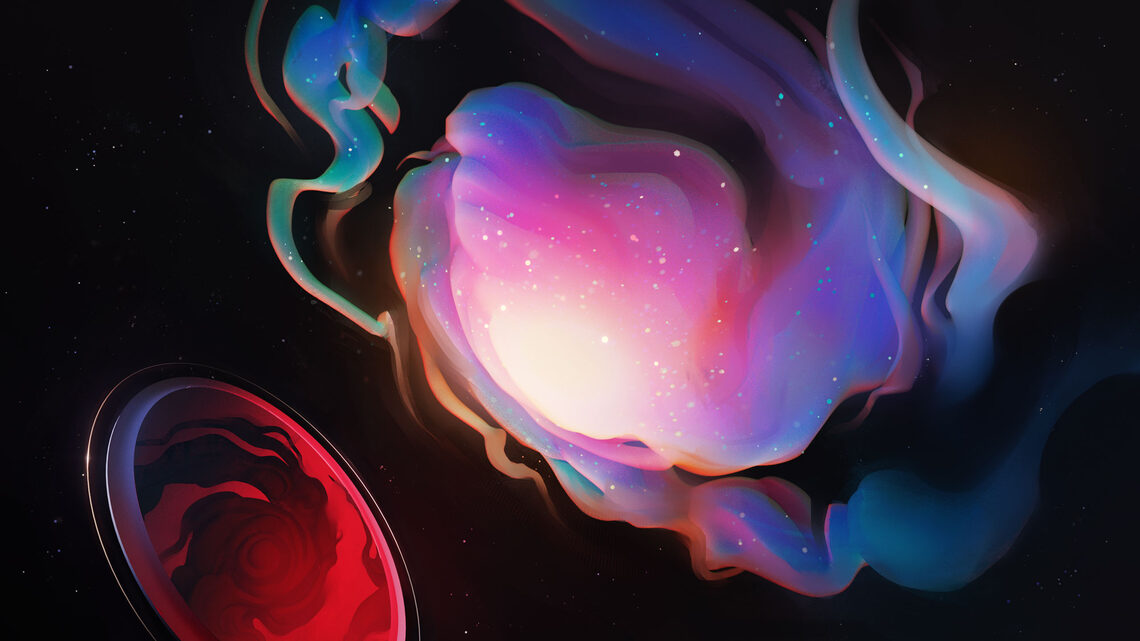 Dark matter is an enigmatic substance that scientists believe accounts for 85% of matter in the universe. But so far it has not been observed directly; scientists can infer dark matter’s presence only by observing its gravitational effects on normal matter.

“Decades’ worth of computer simulations have tested how structure forms and grows under the hypothesis of cold dark matter,” says Matthew Walker, an associate professor of physics at Carnegie Mellon University.

Cold dark-matter simulations show dark matter clumping into small blobs, which encounter other blobs and merge together, continually snowballing until large structures like the Milky Way are formed. These gravitationally bound blobs of dark matter are known as halos.

JWST can see your halo

Anna Nierenberg, assistant professor of physics at University of California, Merced, was awarded 39 hours of observing time during JWST’s Cycle 1 to look for small dark-matter halos.

Many models, including the baseline dark-matter model, predict the existence of small (107 solar mass) halos that do not actually contain galaxies. Such a halo would “just be a blob of dark matter” with no stars inside it, Nierenberg says.

If there are no stars within these blobs of invisible material, how can we even try to detect them? Nierenberg and her team of nearly 20 scientists in the US, Canada, the United Kingdom, Switzerland, Spain, Belgium and Chile are using a phenomenon called gravitational lensing.

Born of Albert Einstein’s theory of general relativity, gravitational lensing says that matter bends spacetime and, subsequently, any light that encounters it. If light from a distant source travels through the universe toward Earth and passes by a massive object—such as a blob of dark matter—the light will be warped around it. If the in-between object is massive enough, the light is deflected in such a way that we’ll see up to four images of the light source appearing around the mass.

Nierenberg’s group will measure the number of small dark-matter halos by observing a sample of quasars (supermassive black holes at cosmological distances surrounded by dusty accretion disks) that have been gravitationally lensed. Detecting small halos would be a triumph for the cold dark-matter theory; conversely, not detecting small halos would imply that cold dark matter does not exist.

Because the light from these quasars must travel a great distance in an ever-expanding universe, it is stretched along the way, pulling its wavelengths into the infrared range. The mid-infrared wavelengths they are observing are almost impossible to see with ground-based telescopes. “We’re going to be observing with absolute reddest bands that JWST can accommodate,” Nierenberg says.

These wavelengths cannot be observed by the Hubble Space Telescope, which studies gravitational lensing at visible wavelengths. And older space-based telescopes that can see in the mid-infrared don’t have the resolution to separate the different lenses. Making these observations in mid-IR requires the high spatial resolution that only the JWST can provide, Nierenberg says.

Nierenberg says, “I really believe that this is going to be a huge scientific step forward.”

Walker is leading another dark-matter project in JWST’s Cycle 1, but his group didn’t apply for observing time. Instead, they are using data that JWST is collecting for other programs.

Walker’s group’s “archival research” is looking inside dwarf galaxies to find wide binary stars, systems of two stars orbiting each other at relatively large distances (on the order of one parsec, slightly less than the distance between the sun and our closest neighbor, Proxima Centauri).

“Because [wide binary stars] are so far apart, they’re very fragile systems,” says Walker. “If, say, a little dark-matter halo were to fly past a wide binary-star system, it could exchange energy with either or both of the stars in that system. And it just takes a small fraction of a fraction of a percent increase in the energy of either star to rip the pair apart.”

If Walker’s team finds wide binary stars, “we can be reasonably confident that those sub-galactic cold dark matter halos don’t exist,” he says. “And that, then, would be a real problem for the cold dark-matter model in general.”

That’s what Katharine Lee, a junior physics major at Carnegie Mellon in Walker’s group, likes about the project. “I particularly think this research is really interesting because the current framework for what we think of as the structure of dark matter is the cold dark-matter model, and the research that Professor Walker’s doing could potentially invalidate that.”

Walker says that JWST is an ideal tool for this search because of its “exquisite sensitivity to faint objects,” as well as the telescope’s abilities to take high-quality images and distinguish pairs of sources at very small separations. And thanks to its 21-foot-diameter primary mirror, JWST will see farther than any other telescope ever built.

“I think JWST is going to give us a new and really powerful angle,” says Jorge Peñarrubia, a professor at the University of Edinburgh and one of Walker’s co-investigators. “But even if that fails, we’ll find other ways.”

Indeed, there are many other techniques that scientists use to search for dark matter, including direct searches by physics experiments. And both Nierenberg and Walker are using gravitational lensing and wide binary-star methods on data from the Hubble Space Telescope while they wait for JWST to open its eyes.

Future JWST science programs might further explore the mysteries of dark matter, whether through gravitational lensing or perhaps by observing statistics of galaxy evolution that scientists can then compare to dark-matter theories.

“We don’t lack theories of what dark matter could be. There are a lot of them,” Gilman says. “What we lack are observations that wield a lot of constraining power over these theories. And that’s something that JWST is going to give us.”