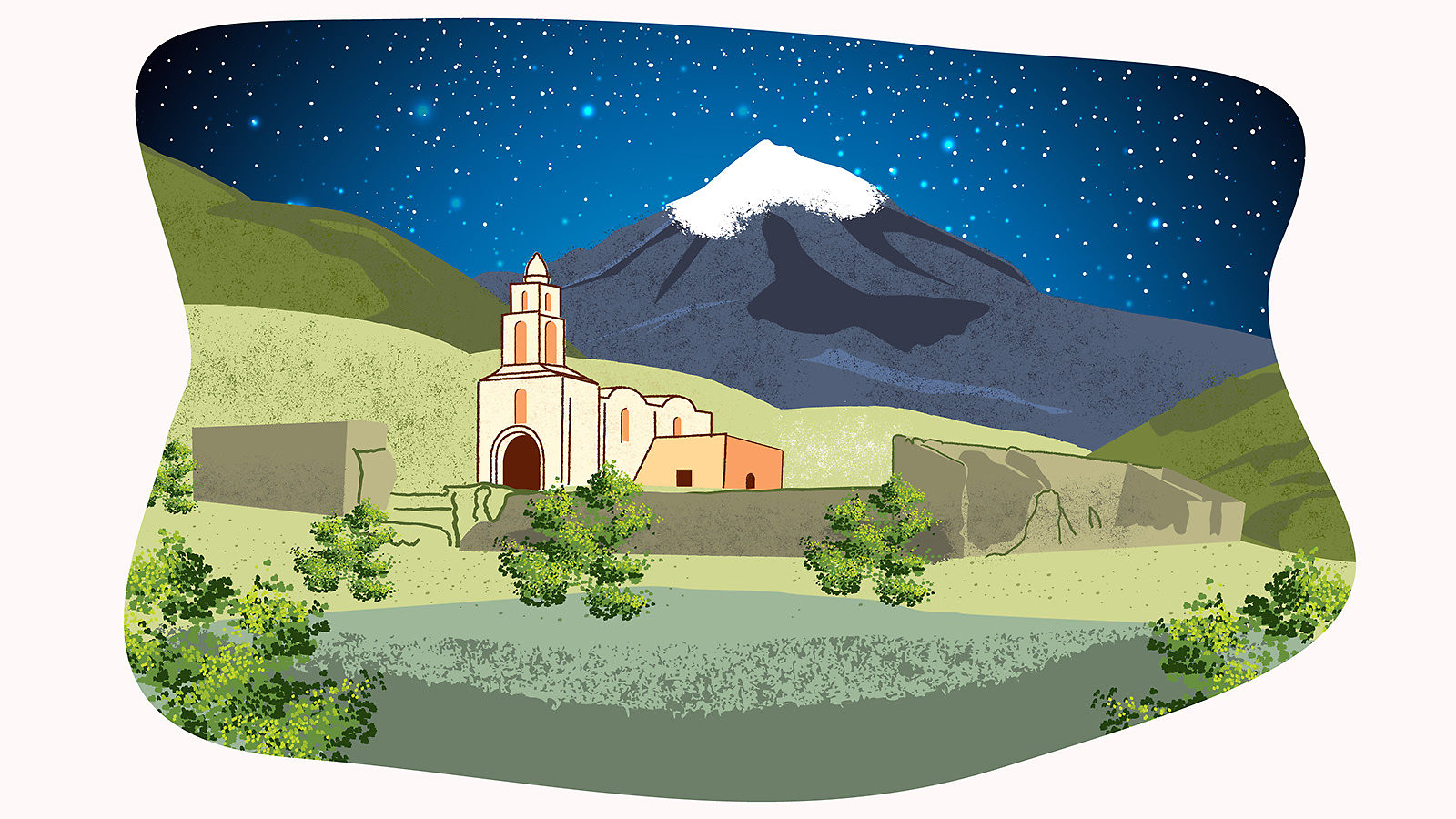 High on a plateau between Pico de Orizaba—the snowcapped tallest peak in Mexico—and Sierra Negra—an extinct volcano to the peak’s southwest—a worker took a moment to catch his breath.

He and his 40-person crew were piecing together what would eventually become a collection of 300 steel tanks for the High-Altitude Water Cherenkov Gamma-ray Observatory, or HAWC.

Once completed, each of the hulking tanks would stand a little taller than a single-story house and measure about 10 steps across. Collectively, they would hold enough purified water to fill at least 20 Olympic swimming pools.

The mountaintop array was built more than 4000 meters (about 13,500 feet) above sea level, an ideal altitude to detect the cosmic particles that pepper Earth from space. HAWC’s main goal is to gather clues as to the birthplace of these high-energy particles.

Even though the oxygen is low at that high altitude, it was still easier to build the HAWC detectors on-site than to cart them up the mountain fully assembled.

Between 2010 and 2014, workers equipped HAWC’s tanks with a total of 1200 vacuum phototubes. The phototubes were to detect Cherenkov radiation, a bluish flash emitted when charged particles outrun light that is traveling inside a liquid medium such as the water in the tanks. The HAWC array records the amplitude and timing of these particles 24 hours a day, mapping the activity of two-thirds of the sky.

Today 30 institutions across Mexico, the United States and Europe collaborate on HAWC. And it all started with a presentation at a conference that piqued the curiosity of a Mexican PhD student studying at the University of Wisconsin-Madison. 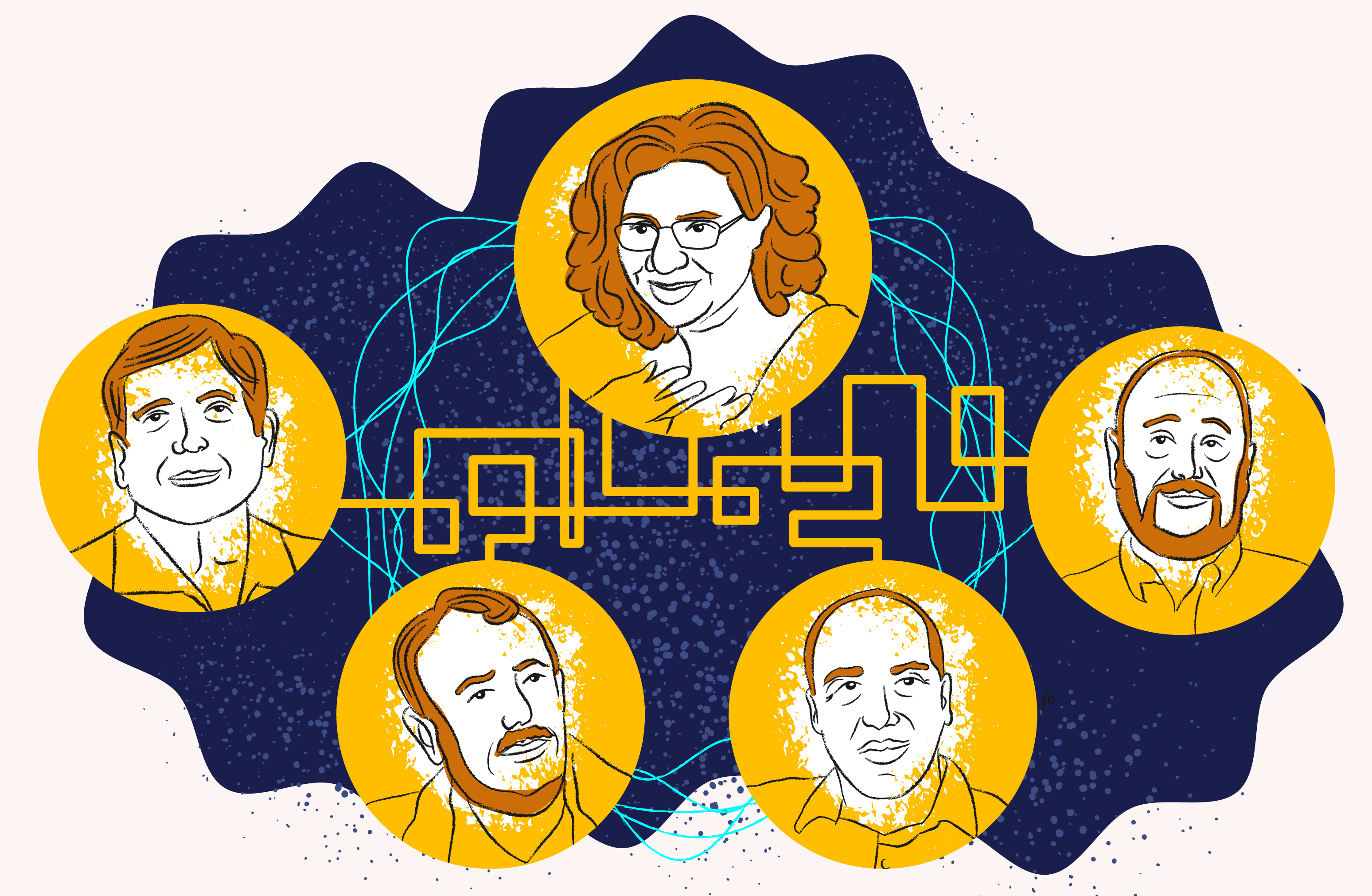 In 2000 Magdalena González was in the fourth semester of a PhD in theoretical physics, and her academic life was miserable. “My life as a theorist was very serious and lonely,” she says. “There were weeks where I did not talk to anybody.”

But then she attended a talk by physicist Brenda Dingus of the US Department of Energy’s Los Alamos National Laboratory. The topic was new to her: experimental research into gamma rays. “It blew my mind,” González says. “I thought, I want to research exactly that.”

She approached Dingus to ask her how she might get involved. Dingus took her on as a graduate student, and she switched to doing satellite analysis and later working in the MILAGRO Gamma Ray Observatory in Los Alamos, New Mexico, for her thesis.

In 2005 a freshly graduated González moved on to a postdoctoral position at the National Autonomous University of Mexico (UNAM). Dingus and the rest of the MILAGRO team were working on their next step. They had reached the limits of their current technology and needed bigger detectors installed at a better location.

González had a dream to build the next-generation detector array in Mexico.

Scientists were considering locations in Tibet and Bolivia as well, and she knew she would need to gather a dream team to make her case. Luckily, that team could be found in Mexico and South America.

González and Dingus reached out to Alberto Carramiñana, who was involved in the construction and development of the Large Millimeter Telescope Alfonso Serrano (GTM) on Pico de Orizaba. “I instantly knew it was a once-in-a-lifetime opportunity,” Carramiñana says.

They got support from Arturo Menchaca and Andrés Sandoval, two specialists in instrumentation for high-energy physics at UNAM. They also brought on board physicist Arnulfo Zepeda, who had co-directed the assembly of Cherenkov tanks at the Pierre Auger Cosmic Ray Observatory in Argentina.

In 2006 Carramiñana and company conducted a study that confirmed the feasibility of building HAWC in Mexico. One year later, the National Institute of Astrophysics, Optics and Electronics (INAOE) and the US National Science Foundation signed an agreement officially authorizing the installation of HAWC inside the national park.

Workers from the nearby communities of Atzitzintla and Texmalaquilla began construction in 2010. They transported a total of 55 million liters of water with trucks from a filtration plant in Esperanza, a municipality close to the mountain’s slope.

Once they completed the work, installing an array of detectors four times the area of a football field, they took off back down the mountain and left the detectors mostly to themselves.

Every day, HAWC generates about 2 terabytes of data, which are stored on hard drives that are transported to the Nuclear Sciences Institute on UNAM’s central campus. The data is then transmitted to the University of Maryland, which provides it to collaborators online. A small number of technicians living in Atzitzintla are available to deal with onsite issues.

In 2013 Sara Coutiño, a PhD student at INAOE, visited Sierra Negra for the first time. She stepped out of a truck after a bumpy half-hour drive up mountain switch-backs. The final road uphill was hard to walk, and the air was getting chillier and thinner. As soon as she stepped onto the mountain glade, 100 Cherenkov detectors came into view.

“Visiting HAWC for the first time was jaw-dropping,” Coutiño says.

The scenery is breathtaking, and the rows and rows of detectors are a dramatic sight, she says, but she was most impressed by the work done behind the scenes—or rather, down the mountain—by HAWC’s 100 collaboration members, who coordinate across countries and institutions. “It still amazes me how all these people work together to keep it going.”

Coutiño originally planned to do her PhD abroad. While she was growing up in the 1980s and ’90s, a considerable part of Mexican experimental physics was done with cutting-edge infrastructure located outside the country at institutions like Fermi National Accelerator Laboratory in the US and CERN in Europe.

But Coutiño says that once she saw the detector array, she realized she already had everything she needed in Mexico. She is now researching Markarian 501 and Markarian 421, a pair of blazar galaxies with unexplained differences in their energy distribution.

Today, projects at HAWC and GTM are home to visiting students from Russia, India, China and other nations. “From the beginning of my scientific training, it has been vital to communicate and cooperate with colleagues based in other countries,” says Zepeda, a senior researcher in the physics department at the Center for Research and Advanced Studies of the National Polytechnic Institute (CINVESTAV) in Mexico City. “The more connected you are, the more you will expand your horizons.”

Inspired by HAWC, in 2014 Coutiño started co-organizing the Annual Gathering of Astronomy Students, an independent event where young researchers from Mexico and other countries share their research. HAWC’s results have been presented there since 2015.

Eyes on the future

HAWC’s success has motivated the conception of even bigger projects in Latin America. An alliance of Latin American, American and European scientists is currently planning an even more powerful array called the Southern Gamma Ray Survey Observatory, or SGSO, to potentially be located in Argentina, Peru or Chile.

“Being part of a worldwide set of detectors is where our future is,” says Jordan Goodman, principal investigator for HAWC from the US National Science Foundation. “The next step for us would be to collaborate with South America. Having an observatory further south would be ideal for looking at the galactic center.”

The Large High Altitude Air Shower Observatory (LHAASO), whose array of 900 Cherenkov water detectors is scheduled to start fully operating in southwest China in 2021, is expected to take part in this future network. Since HAWC and LHAASO have similar latitudes but different geographical longitudes, scientists hope to use them to monitor different aspects of a single astronomical object.

“What comes next after HAWC for our students?” González says. “We are working on a plan to harvest what we sow.”