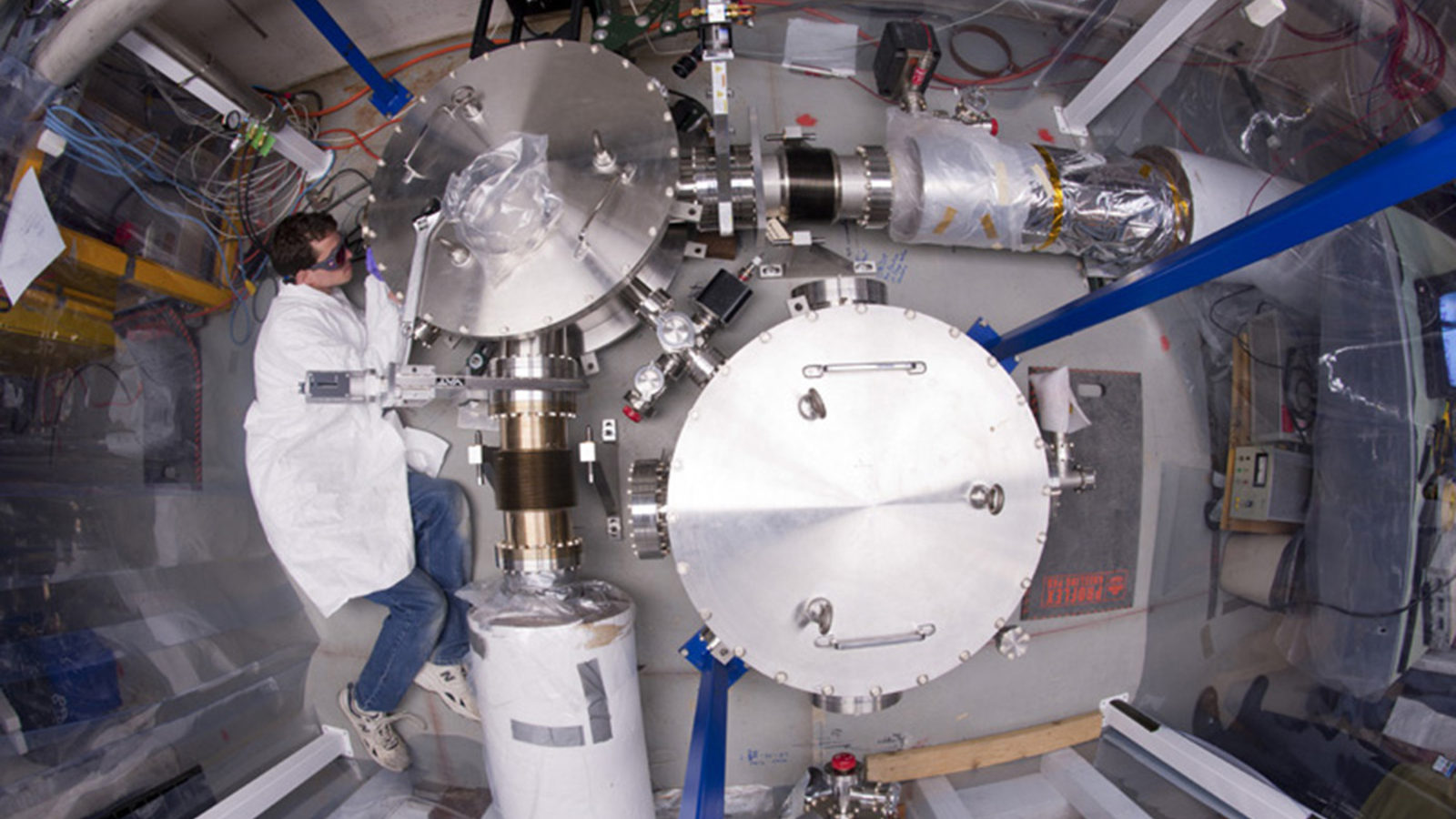 Our common sense and the laws of physics assume that space and time are continuous. The Holometer, an experiment based at the US Department of Energy’s Fermi National Accelerator Laboratory, challenges this assumption.

We know that energy on the atomic level, for instance, is not continuous and comes in small, indivisible amounts. The Holometer was built to test if space and time behave the same way.

In a new result 1 Search for space-time correlations from the Planck scale with the Fermilab Holometer released this week after a year of data-taking, the Holometer collaboration has announced that it has ruled out one theory of a pixelated universe to a high level of statistical significance.

If space and time were not continuous, everything would be pixelated, like a digital image.

When you zoom in far enough, you see that a digital image is not smooth, but made up of individual pixels. An image can only store as much data as the number of pixels allows. If the universe were similarly segmented, then there would be a limit to the amount of information space-time could contain.

The main theory the Holometer was built to test was posited by Craig Hogan, a professor of astronomy and physics at the University of Chicago and the head of Fermilab’s Center for Particle Astrophysics. The Holometer did not detect the amount of correlated holographic noise—quantum jitter—that this particular model of space-time predicts.

But as Hogan emphasizes, it's just one theory, and with the Holometer, this team of scientists has proven that space-time can be probed at an unprecedented level.

“This is just the beginning of the story,” Hogan says. “We’ve developed a new way of studying space and time that we didn’t have before. We weren’t even sure we could attain the sensitivity we did.”

The Holometer isn’t much to look at. It’s a small array of lasers and mirrors with a trailer for a control room. But the low-tech look of the device belies the fact that it is an unprecedentedly sensitive instrument, able to measure movements that last only a millionth of a second and distances that are a billionth of a billionth of a meter—a thousand times smaller than a single proton.

The Holometer uses a pair of laser interferometers placed close to one another, each sending a 1-kilowatt beam of light through a beam splitter and down two perpendicular arms, 40 meters each. The light is then reflected back into the beam splitter where the two beams recombine.

If no motion has occurred, then the recombined beam will be the same as the original beam. But if fluctuations in brightness are observed, researchers will then analyze these fluctuations to see if the splitter is moving in a certain way, being carried along on a jitter of space itself.

According to Fermilab’s Aaron Chou, project manager of the Holometer experiment, the collaboration looked to the work done to design other, similar instruments, such as the one used in the Laser Interferometer Gravitational-Wave Observatory experiment. Chou says that once the Holometer team realized that this technology could be used to study the quantum fluctuation they were after, the work of other collaborations using laser interferometers (including LIGO) was invaluable.

“No one has ever applied this technology in this way before,” Chou says. “A small team, mostly students, built an instrument nearly as sensitive as LIGO’s to look for something completely different.”

The challenge for researchers using the Holometer is to eliminate all other sources of movement until they are left with a fluctuation they cannot explain. According to Fermilab’s Chris Stoughton, a scientist on the Holometer experiment, the process of taking data was one of constantly adjusting the machine to remove more noise.

“You would run the machine for a while, take data, and then try to get rid of all the fluctuation you could see before running it again,” he says. “The origin of the phenomenon we’re looking for is a billion billion times smaller than a proton, and the Holometer is extremely sensitive, so it picks up a lot of outside sources, such as wind and traffic.”

If the Holometer were to see holographic noise that researchers could not eliminate, it might be detecting noise that is intrinsic to space-time, which may mean that information in our universe could actually be encoded in tiny packets in two dimensions.

The fact that the Holometer ruled out his theory to a high level of significance proves that it can probe time and space at previously unimagined scales, Hogan says. It also proves that if this quantum jitter exists, it is either much smaller than the Holometer can detect, or is moving in directions the current instrument is not configured to observe.

So what’s next? Hogan says the Holometer team will continue to take and analyze data, and will publish more general and more sensitive studies of holographic noise. The collaboration already released a result related to the study of gravitational waves.

And Hogan is already putting forth a new model of holographic structure that would require similar instruments of the same sensitivity, but different configurations sensitive to the rotation of space. The Holometer, he says, will serve as a template for an entirely new field of experimental science.