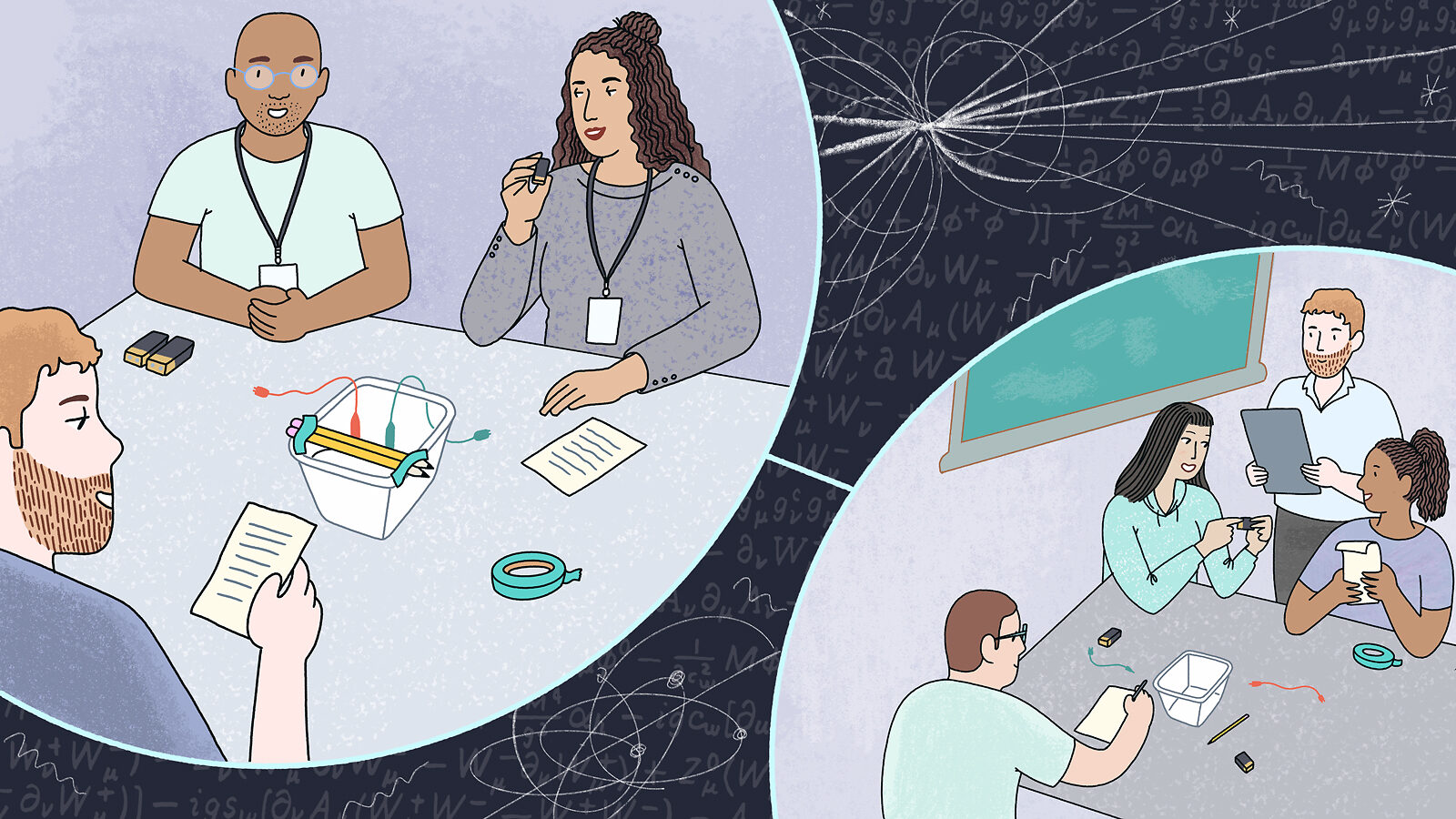 Picture this: A stationary object such as a vase suddenly explodes, sending fragments flying. Given the final energies and momenta of the fragments, can you figure out the mass the object had before it broke apart?

Dave Fish gives his students this common conservation-of-momentum problem—with a twist. Instead of describing the explosion of a macroscopic object like a vase, he describes the transformation of a top quark and top antiquark into other fundamental particles.

Fish teaches high school physics and is a teacher-in-residence at Perimeter Institute for Theoretical Physics in Ontario. In Canada, particle physics is “one of those things that teachers tend to leave until the end of the course, and then they run out of time,” Fish says. “Most of us, as high school teachers, feel overwhelmed by the content.”

Particle physics makes an appearance in the curriculum for the International Baccalaureate, a program recognized as a qualification for entry into higher education by many universities around the world. The subject also appears in some state curricula, like that of North Rhine-Westphalia in Germany. But in general, “there are not a lot of curricula that feature particle physics explicitly,” says Jeff Wiener, the Teacher Programmes Manager at CERN. “Those that do usually focus on the rather boring stuff like: ‘Name two leptons.’”

Putting particles in the curriculum

Many high school science teachers who would like to teach particle physics say they feel insufficiently knowledgeable about the subject or are unsure how to include it without sacrificing required curricular topics.

Fish and Wiener are two of the many people who hope to change that. They see many opportunities for integrating particle physics into standard curricula focused on general physics concepts. To teach conservation of momentum, try using real data from the discovery of the top quark (an activity developed by educators at the US Department of Energy’s Fermi National Accelerator Laboratory). To demonstrate the motion of charged particles in magnetic fields, show photographs from particle detectors called bubble chambers. To provide an example of circular motion, discuss the mystery of dark matter.

One of Fish’s former students, Nikolina Ilic, considers a project on dark matter she undertook in his class to be a turning point in her education. “I realized that we don’t know what 95% of the universe is made of, and this was mind-blowing to me,” she says. “That was when I decided to pursue particle physics.”

Ilic went on to do her PhD research at CERN, where she contributed to the statistical analysis for the discovery of the Higgs boson.

In the years when he does not teach high school students, Fish leads workshops at Perimeter Institute to help other teachers bring particle physics into their classrooms. Each year, about 40 or 50 teachers from Canada and other countries attend a weeklong EinsteinPlus workshop, participating in a variety of collaborative activities meant to teach them about modern physics. One of the most popular is a card-sorting game that teaches the patterns and symmetries of the Standard Model. In each activity, “we ask the teachers to be the students and ask the questions that students would ask,” Fish says.

As the COVID-19 pandemic has forced many programs to move online, Fermilab has leaned into finding ways to interact with teachers and students virtually. “We have career talks with lab staff, classroom presentations we are creating with teachers and running virtually, Virtual Ask-a-Scientist, and Saturday Morning Physics,” says Amanda Early, Fermilab’s education program leader who manages the K-12 physical science programs.

Each year, Fermilab runs programs for educators and students, engaging them with Fermilab science. "The more you expose students to particle physics—the sheer size and scale of it and its benefits—the more opportunities kids will see to engage in science," Early says.

In 2020, one of the education group’s Summer Secondary Science Institutes specifically focused on helping high school teachers tailor modern physics lessons to the Next Generation Science Standards used in many US states. Around 80 teachers from the Chicago area and across the country participated in the interactive five-day workshop, which in 2020 was provided online.

The Next Generation Science Standards do not mention particle physics explicitly. But the crosscutting concepts and science and engineering practices that frame them mesh well with the subject, says David Torpe, an Illinois high school science teacher who has taught professional development workshops at Fermilab for six years.

Bringing teachers to CERN, and CERN to teachers

Across the pond in Europe, CERN’s Teacher Programmes attract over 1000 high school teachers from around the world to Geneva annually. Between physics lectures, the teachers tour laboratories and have Q&A sessions with CERN scientists.

“The idea was that upon returning to Mexico, we would be ambassadors and encourage some students to see that it’s possible to go do research at CERN,” says Eduardo Morales Gamboa, who attended the Spanish-Language Teacher Programme in 2019.

Since visiting the enormous CMS detector and seeing particle tracks in a homemade cloud chamber, he has incorporated particle physics—and the many useful applications that have stemmed from it—into his classroom discussions of the intersections of science, technology and society. Eventually, he says, he hopes to build a cloud chamber with his students.

According to Wiener, Morales Gamboa’s experience is a common one. Many alumni of the Teacher Programmes even come back to CERN, this time with their students along for the trip, to spark the next generation’s enthusiasm for particle physics.

The success of CERN’s outreach efforts stems in part from integration with physics education research. Indeed, CERN’s Teacher Programmes are designed to give attendees knowledge not just of particle physics, but also of pedagogical best practices for teaching science.

One such practice is taking students through “predict-observe-explain” cycles. “You encourage students to make a prediction of what is going to happen before they do the experiment. This way, you make sure that they first activate their previous knowledge and get curious about the outcome,” says Julia Woithe, who coordinates hands-on learning labs at CERN. “Then, if they are surprised by the observed outcome, they need to figure out in a team how to explain the differences between their predictions and observations. This usually leads to a powerful ‘eureka!’ moment.”

In addition to running events at CERN, Wiener traveled to India to collaborate with educators from the International School of Geneva in the first South Asia Science Education Programme last year. Eighty teachers from the region attended the weeklong program at Shiv Nadar School Noida in New Delhi.

Vinita Sharat, the school’s STEAM coordinator, has taught particle physics for a decade but remembers facing resistance at first from the organizations where she previously worked. “The first challenge is to change the mindset of authority,” she says. “They asked why I was teaching it since it’s not in the scope of the syllabus.”

Her students, on the other hand, had no qualms. Some found particle physics so fascinating that they would stay online until midnight discussing quarks and leptons with Sharat. “Students will always be ready to learn something related to nature,” she says.

Sharat fosters students’ creative sides in her lessons about particle physics by encouraging them to write poems, make videos or choreograph dances to explain the concepts they are studying. Like Fish, Sharat has stayed in contact with several former students whom she inspired to pursue a career in physics.

“The base of everything”

After CERN’s program at her school, Sharat hopes that more teachers across South Asia will bring particle physics into their classrooms. And Wiener plans to lead more teaching workshops across the world in the future.

For Morales Gamboa, the benefits of teaching particle physics in high school extend beyond inspiring a few students to pursue careers in the field. Talking about the connections to engineering shows how abstract scientific ideas relate to everyday life, while describing the massive international projects conveys the spirit of collaboration key to modern science.

Stacy Gates, an Illinois high school science teacher who taught Fermilab’s Summer Secondary Physics Institute alongside Torpe in 2020, emphasizes that teaching particle physics fosters critical thinking. “I encourage my students to question me when they don’t believe that particles can behave a certain way,” she says. “That’s such an important skill because that’s what scientists do. They question everything, and they try to prove and disprove.”

Sharat agrees that particle physics holds valuable lessons. No matter where her students go in life, she wants them to understand that “particle physics is the base of everything,” she says.