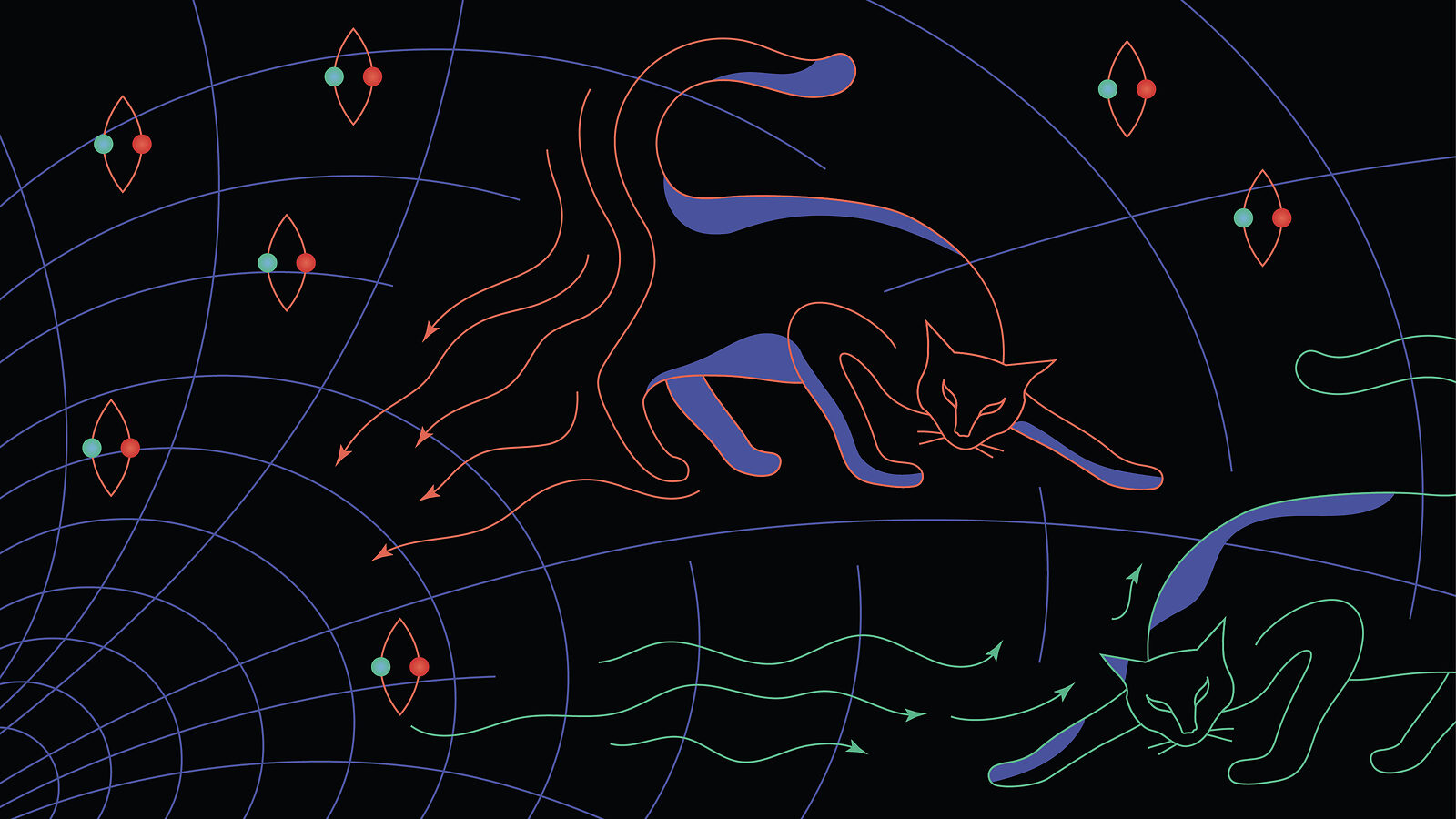 If there’s one misconception people have about black holes, it’s that nothing ever escapes them. As physicist Stephen Hawking and colleagues showed back in the 1970s, black holes actually emit a faint glow of light.

There’s a funny consequence to this glow: It carries energy away from the black hole. Eventually this drip, drip, drip of radiation drains a black hole completely and causes it to disappear. All that remains is the light.

In the 1970s, scientists’ calculations suggested that this light contained almost no information. Black holes seemed to be destroyers not just of the objects that sank into them but also of any information about what those objects had been in the first place.

The problem is: According to quantum mechanics, that’s impossible.

“This is where we need to look to understand quantum gravity better.”

A core tenet of quantum mechanics, the study of particle behavior on the subatomic level, is this: If you know the current state of any system, then you know everything there is to know about its past and its future.

Somehow, black holes seemed to be destroying information that, according to quantum physics, cannot be destroyed. This problem, today known as the black hole information paradox, has befuddled physicists for decades.

But over the last several years, theoretical physicists have identified key pieces that Hawking’s original calculation overlooked. Calculations completed in 2019 gave scientists insight into how that information might stick around.

Those developments could mean more than just solving the information paradox—they could also provide clues that could help finally solve the mystery of how gravity works at the subatomic level, says MIT physicist Netta Engelhardt, whose work with Institute for Advanced Study physicist Ahmed Almheiri, along with similar work by University of California, Berkeley physicist Geoff Penington and colleauges, pointed the way toward the latest results. The research was supported in part by the US Department of Energy’s Office of Science.

“This,” she says, “is where we need to look to understand quantum gravity better.”

In the 1990s, the first hint arrived that black holes might not be the information-destroyers they’d been made out to be.

Physicist Don Page, a former student of Hawking’s, imagined a black hole that absorbed quantum-mechanical waves and then radiated them back out in a scrambled form. Unlike Hawking, he followed quantum theory in assuming that the combined system—of the black hole, the incoming waves and the outgoing radiation—was closed, so that whatever information was in the system to begin with would be preserved.

The Page curve tantalized physicists almost as much as the original information paradox. It showed that while physicists should still expect Hawking’s calculation to hold for quite a long time, it “has to go wrong eventually, and before you would expect it to,” based on other calculations, says Penington, the UC Berkeley physicist.

Still, many physicists wondered whether Page could really be right. “The Hawking calculation seemed very robust,” Penington says. To get something like the Page curve in a real black hole, “it seemed like you’d need something very radical.”

For the last several decades, the challenge has been to calculate the Page curve in the full glory—or perhaps full brutality—of Einstein’s general theory of relativity, finally taking gravity into account.

And now physicists have done just that.

The result relies on the replica trick, a mathematical method for calculating entropy. In computing the entropy of a black hole and its radiation, physicists need to add up contributions from many different configurations of that system. That turns out to be practically impossible to do directly—if limited to one black hole.

If, on the other hand, they consider two copies of a black hole, each existing in a separate universe, and the radiation that both emit, the entropy is relatively easy to compute, says Almheiri, the IAS physicist. From this calculation physicists can infer what information would exist between a single black hole and its radiation. Within the context of the replica trick, information in the interior of one black hole can flow into the interior of the other, and this information flow becomes more important over time.

Back in the regular universe, the finding makes precise an idea that had been suggested a few times in the last decade: The entropy in the connection between Hawking radiation outside the black hole and what’s left inside can actually affect the interior structure of the black hole. As Almheiri puts it, “there's an operation you can perform on the radiation outside that would create a cat inside.”

Of course, no one actually knows what they would have to do to the radiation outside an actual, real-world black hole to make a cat inside it. Nor do the latest calculations reveal exactly what radiation black holes produce or how that’s connected to what falls into them in the first place.

But most everyone agrees, it is significant progress. To Almheiri, “the paradox is not as severe as it once was.”

What’s more, examining exactly how the quantum calculations work in a wider range of circumstances could reveal something new about how a full quantum theory of gravity could work, Engelhardt says.

And even if it doesn’t, the possibility of resolving the information paradox is enticing. When Engelhardt and her collaborators first started studying it, she says, “I barely slept, it was so exciting. For the first time in a really long time, we’re making progress.”