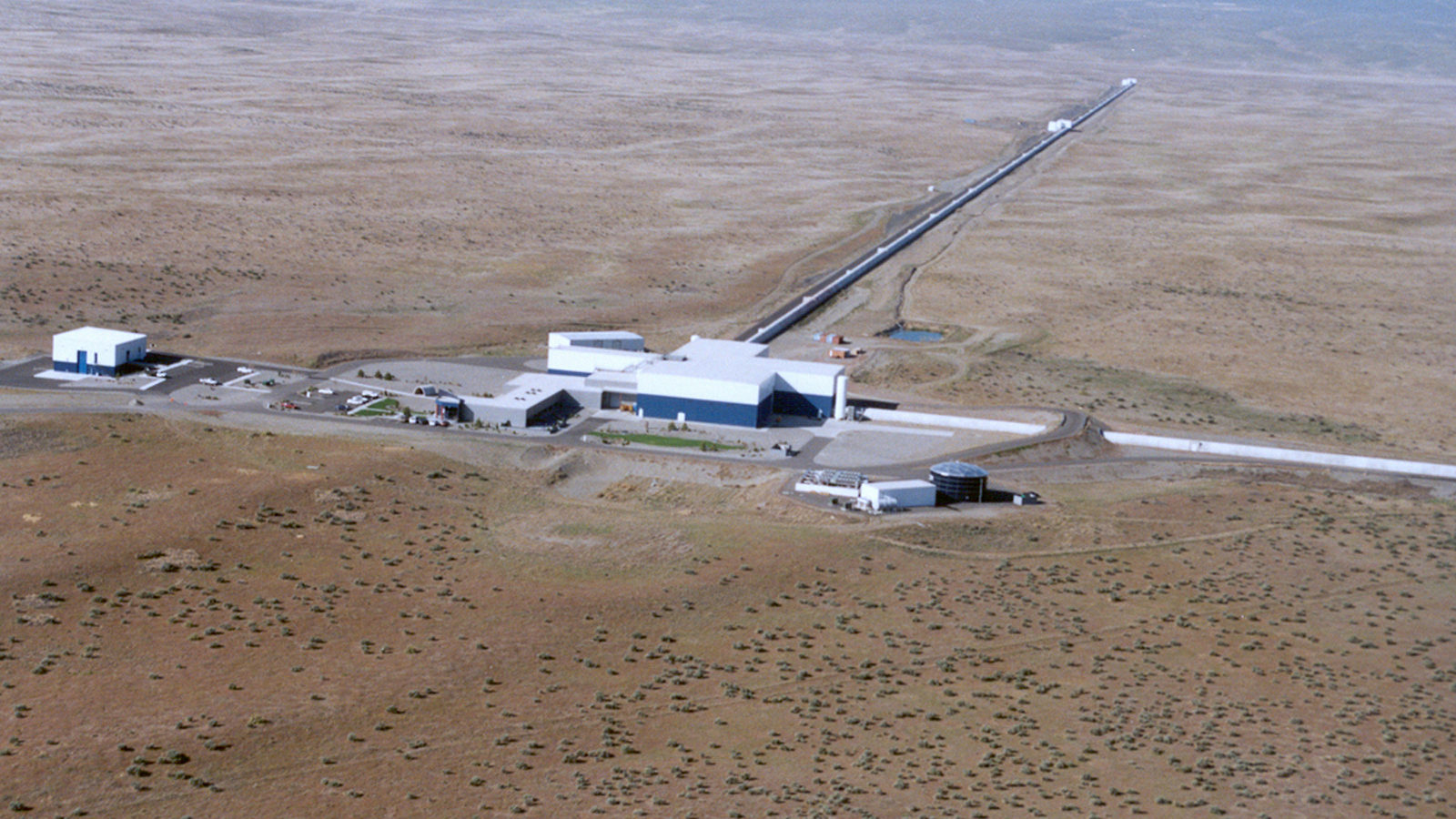 Gravitational waves and where to find them

Advanced LIGO has just begun its search for gravitational waves.

For thousands of years, astronomy was the province of visible light, that narrow band of colors the human eye can see.

In the 20th century, astronomers pushed into other kinds of light, from radio waves to infrared light to gamma rays. Researchers built neutrino detectors and cosmic ray observatories to study the universe using particles instead. Most recently, another branch of lightless astronomy has been making strides: gravitational wave astronomy.

Gravitational waves are an important prediction of Einstein’s general theory of relativity. According to that theory, a variety of astronomical objects—such as supernova explosions, pairs of black holes and other mutually orbiting objects with strong gravity—give off energy as disturbances in the structure of space-time that propagate outward at the speed of light.

Even though these waves are ubiquitous and often carry enormous amounts of energy, gravity is so weak that they barely nudge other objects as they pass.

But sufficiently sensitive detectors could measure these waves.

Scientists have already measured gravitational waves indirectly. They first saw evidence of their existence in the Hulse-Taylor binary pulsar.

Pulsars are the remnants of stars more massive than the sun. They compress the mass of a star into an object the diameter of an Earth city. Their small size means they can orbit very close to each other, emitting gravitational waves and causing one another to speed up as they lose energy and get closer together.

Astronomers have monitored the Hulse-Taylor binary pulsar since the 1970s, and the amount of speed-up they see is exactly the predicted effect of gravitational waves.

Today’s gravitational wave observatories are based on a different concept. One of these is LIGO, the Laser Interferometer Gravitational-wave Observatory, a powerful instrument that recently began collecting data after a major upgrade.

LIGO consists of two detectors, located in Louisiana and Washington in the United States. With the upgrade came an increase in sensitivity, enabling LIGO to look for gravitational waves produced by supernovae, colliding pulsars and other cataclysmic astronomical events hundreds of millions of light-years away.

Unlike tall observatory buildings and big radio telescope dishes scientists often use to study the cosmos, LIGO hugs the ground. Each detector forms a large L-shape, with arms made of concrete tubes 4 kilometers (2.5 miles) long. The inside of each tube is held at high vacuum. The experiment works by shining a powerful laser down the arms, where the beam bounces off a movable mirror at the far end.

When a gravitational wave passes, it nudges the mirror, slightly shifting the position of the crests and troughs of the laser beam. By comparing the beams between the two arms, LIGO staff can spot the gravitational wave’s effect—and possibly identify what made the wave in the first place.

Gravitational wave detectors must be smaller in size than the source of the waves, but smaller detectors are less sensitive. LIGO is designed to be the right size to see waves from binary pulsars or black holes right as they collide, at which point they are separated by mere kilometers. (For more stable systems, like the Hulse-Taylor binary pulsar, we will need a LIGO-type observatory larger than Earth. That’s the idea behind the proposed Laser Interferometer Space Antenna, or LISA, which would consist of three spacecraft orbiting the sun.)

LIGO also needs to be sensitive. This is because gravity is by far the weakest force in the universe; even very powerful gravitational waves from supernovas or other cataclysms will barely push a thing. As a result, LIGO is capable of measuring nudges to its mirror of about 10-20 meters, or about one ten-thousandth of the width of an atomic nucleus.

That sensitivity is greater than any other experiment in existence, but it comes at a big price. Lots of things can shake the mirror, from earthquakes to trucks to high winds buffeting the buildings in which LIGO sits. That’s part of the reason for having two LIGO antennas, separated by 3000 kilometers. Whatever’s causing noise in one detector will be unrelated to the noise in the other—though earthquakes will typically show up in both, thanks to how well they travel through Earth’s crust.

Significant rumblings like that can happen about once a day, knocking LIGO out of commission for a few hours. Despite that, both detectors are operating about 12 hours out of 24, a substantial amount of time for hunting gravitational wave signals.

Part of Dwyer’s job is to keep the instruments all working together at the right sensitivity, a task that feels as much like engineering as science. In truth, much of gravitational wave astronomy has that hybrid feel. The objects of study—black holes, supernovae, neutron stars—are in the realm of ordinary astronomy. But the scope of the experiments is more akin to particle physics.

The project has drawn together experts in a broad range of fields, from theoretical gravitation research to optical engineers to experts in computer algorithms. LIGO papers have hundreds of authors, showing how many people are needed to make everything work.

But the real proof of success of any experiment is in the quality of data it produces. The current phase of operation is known as Advanced LIGO, which began observing in September. Dwyer notes that at this sensitivity, the detector could spot a neutron-star collision as far as 260 million light-years away, more than 100 times the distance to the Andromeda Galaxy, our nearest galactic neighbor. But the work isn’t done yet: Once everything is fully operational within the next two years, that range will extend to 650 million light-years, encompassing a large fraction of the nearby universe.

It’s up to the universe to do the rest.

“We've been staring at the sky for 400 years with telescopes,” says Shane Larson, a gravitational wave astronomer at Northwestern University.

Those centuries of observations give scientists a start on estimating how many gravitational wave events LIGO might spot, which conservative guesses estimate to be about 10 per year.

On the other hand, if we don’t see gravitational waves right away at LIGO, it’s not because they aren’t there—the Hulse-Taylor binary and other systems show that they are—it’s because our theories are overestimating how many we should see. As Larson says, “The true answer is what LIGO’s gonna tell us.”

The real excitement lies in what we don’t yet understand, including supernovae. With LIGO, “we will be able to ‘see’ inside a star as it collapses,” says researcher Amber Stuver of Caltech, who works at the LIGO facility in Livingston, Louisiana. “There is no other way to observe how that mass moves inside without detecting gravitational waves.”

And just as X-ray and radio astronomy led to the discovery of surprising new things such as pulsars, gravitational wave astronomy is bound to turn up something entirely new. “Every time humans have observed the universe in a new way, they discovered something they didn't expect to find,” Stuver says. “I’m here to find the unexpected.”