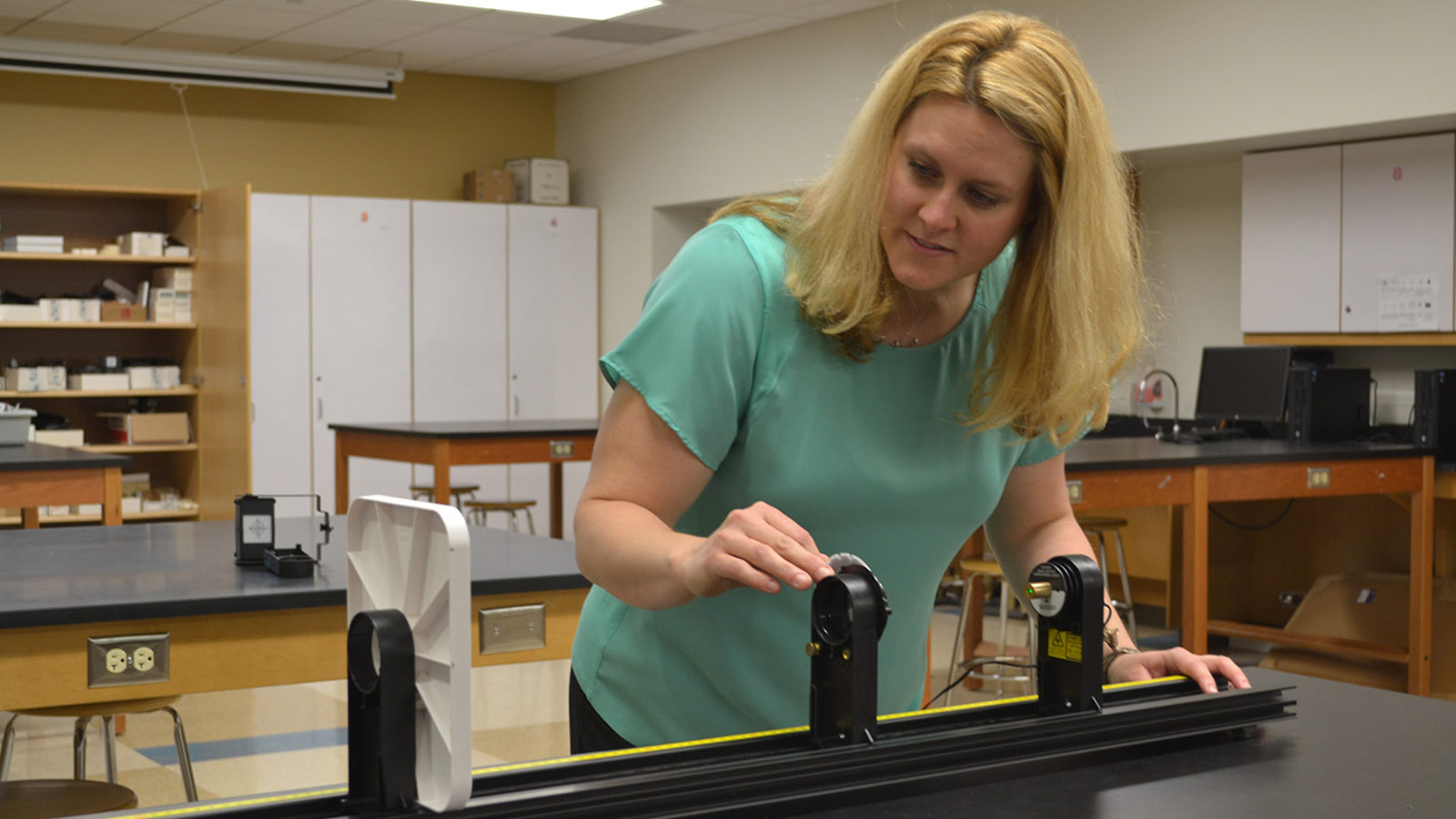 While she was earning her PhD in particle physics, Jennifer Gimmell spent her time developing data analyses. Now she spends her days developing the next generation of scientists.

Gimmell teaches physics at Benet Academy, a private college-preparatory school in Lisle, Illinois, and as an adjunct physics professor at the College of DuPage, a community college in nearby Glen Ellyn.

“To me, this is my way of influencing science almost in the same way that I was before,” Gimmell says. “But now I’m doing it from the inside.”

Life as a particle physicist

Gimmell earned her bachelor’s degrees in physics and mathematics from Hiram College, and she earned her master’s degree and PhD in particle physics from the University of Rochester. She did her graduate work on the CDF experiment at the Tevatron particle accelerator at Fermi National Accelerator Laboratory.

During her time at Fermilab, Gimmell worked in an analysis group specializing in studies of the top quark. She was also responsible for monitoring the CDF detector’s radiation protection and for helping maintain the innermost layer of the detector, the silicon tracker.

Gimmell says the thing she enjoyed most about particle physics was working toward the common goal of better understanding how the universe works.

“Even though my thesis was such a narrow part of the answer to that question, knowing that you’re contributing to the answer is pretty neat,” she says.

As a graduate student at a large national laboratory, Gimmell often struggled to find her place. But this struggle helped to shape her, she says.

“I really think that working in such a large collaboration and always being put on the spot in collaboration meetings helped me to think a little quicker on my feet and be confident in what I do.”

Gimmell says she always enjoyed teaching. In elementary school, her grandmother would watch her in the afternoons and Gimmell would teach her what she had learned in school.

Her love for teaching continued into adulthood. “There was always something I loved about telling other people something interesting and getting the ‘Wow, really!’ reaction.”

In graduate school, her favorite part was giving presentations. “I felt a real sense of accomplishment when I could put together a story to bring ideas and concepts to life.”

While working as a postdoc at Fermilab, Gimmell took a part-time position teaching an introductory math class at Rasmussen College in Aurora, Illinois. Then, one of her Fermilab colleagues introduced her to Tom Carter, a physics professor at the College of DuPage.

Carter was about to take a year-long sabbatical to work on the Dark Energy Survey experiment and was looking for a replacement. Carter says Gimmell’s energy and confidence when engaging with students made her perfect for the job. Gimmell applied for and was offered the position. She began teaching physics full time.

Gimmell says she fit well in the community college atmosphere. “Your time day-to-day is spent interacting with students, and that was definitely something I really wanted.”

Life as an educator

A typical day for Gimmell now is completely different from when she was a particle physicist. One thing that stands out is the difference between talking to students and talking to fellow physicists.

Gimmell’s colleagues came to the conversation with a shared interest in particle physics; that is not always the case with her students.

“With high school students, you have a blank slate, and you have to spend time on your presentation and in selling your subject,” Gimmell says. “I show passion for my subject when I teach, and because I am excited about it, it’s easy to get my students excited about it.”

When teaching physics, Gimmell helps her students learn to think like scientists. She always stresses the importance of understanding why you are doing something instead of just focusing on the specific steps to solve a particular problem.

“Instead of just telling students whether they are right or not, my question to them is ‘How do you know you are right?’” Gimmell says. “I help them in their line of questions and help them build the way to think problems though.”

At the College of DuPage, Gimmell uses a technique called “flipping the classroom,” in which students work on homework problems with her during class and watch her recorded lectures at home.

“Flipping the classroom is a gutsy thing to do, and not every educator could do it successfully like Jennifer does,” Carter says. “She keeps her students moving and keeps them struggling— she’s got students energetically running to the board arguing about problems in groups.”

One of Gimmell’s Benet Academy students, Joseph A. Popelka, was one of 141 students from across the nation to be named a 2015 US Presidential Scholar. Each scholar was asked to name their their “most influential teacher,” and Popelka named Gimmell. She received a congratulatory letter from US Secretary of Education Arne Duncan.

Gimmell was also recently presented with an Innovation Award by the College of DuPage for her techniques to engage students in the classroom.

“There are three attributes that make Jennifer a great educator,” Carter says. “She knows her subject matter cold, and it shows in her confidence in the classroom. She really cares about her students and truly wants them to succeed. And she’s always willing to try something new.”