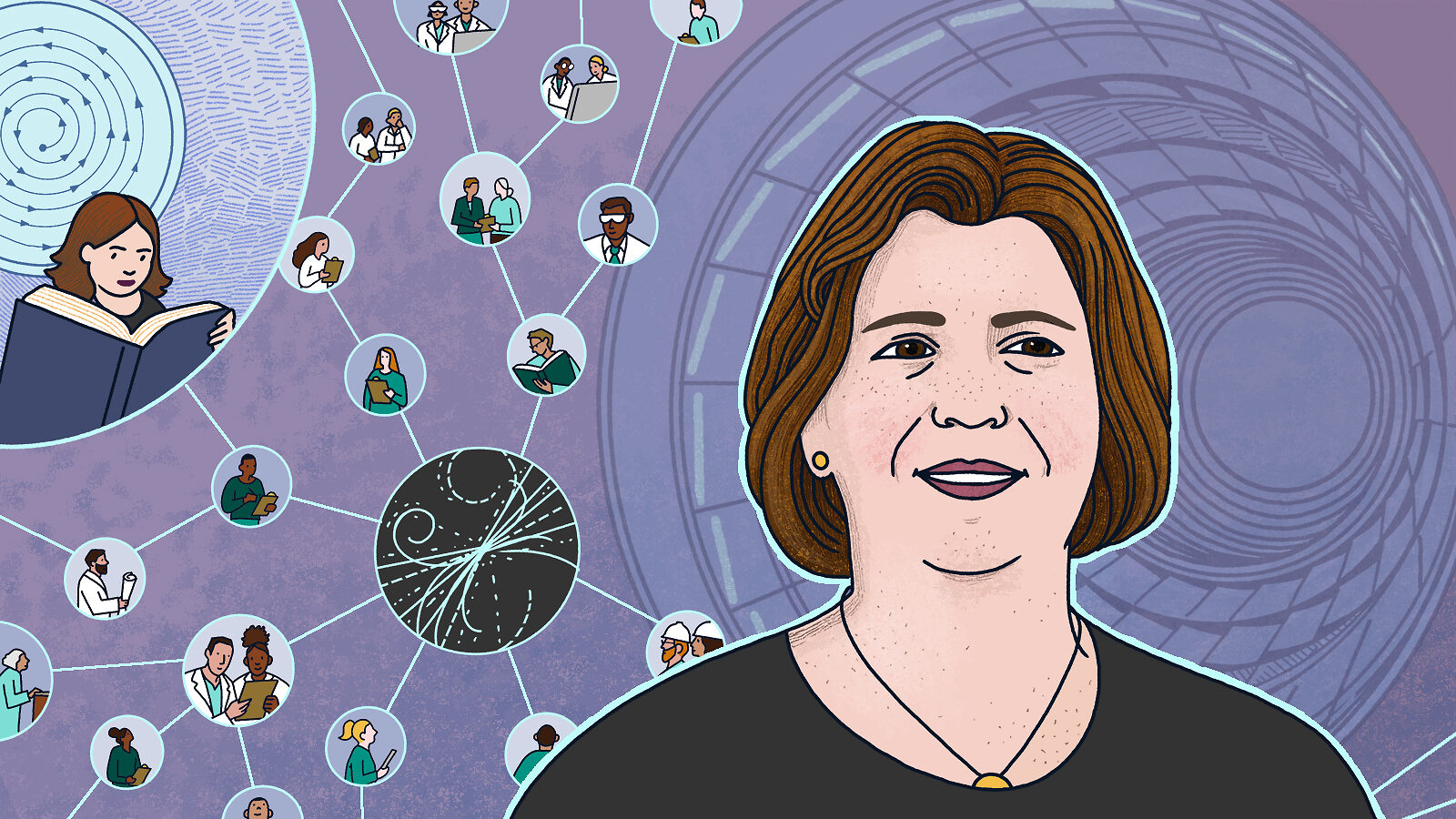 In ninth grade, Patty McBride wrote about what she wanted to be when she grew up.

“I wanted to be a musician, set designer or nuclear physicist,” she says. “I wrote a little homework assignment about what it would be like to be a physicist.”

McBride grew up in a small town where “nuclear physicist” was an atypical career choice. She remembers the teacher commenting on her essay and saying that, while it was very well written, she was skeptical about McBride’s scientific aspirations.

McBride not only became a physicist, but she will now lead one of the largest scientific collaborations in history: the CMS experiment, which collects and studies particle collision data from the Large Hadron Collider at the international laboratory CERN.

CMS is a five-story-tall particle detector at the LHC, located just outside Geneva, Switzerland, and 300 feet underground. The international CMS collaboration comprises 3,000 scientists from more than 40 countries across the world. About a third of the scientists come from institutions in the United States. Every other year, the CMS collaboration elects a new spokesperson for a two-year term. The spokesperson is responsible for guiding CMS’s technical and scientific endeavors, as well as representing the experiment on an international stage.

“She has really good technical and scientific judgment. She knows the terrain and knows what’s important.”

McBride was elected the next CMS spokesperson on February 11 and will start her term September 1. Her tenure coincides with a pivotal moment for the LHC, which will start its third run of operations this summer. Run III will boost the LHC’s collision rate, but CMS is also currently preparing for the High-Luminosity LHC, which will make its debut in 2029 and increase the collision rate by a factor of 5 beyond the LHC’s design luminosity.

“We expect to double our data set during LHC Run III, which will take some time to process and analyze,” McBride says. “At the same time, we have to balance physics and operations with an ambitious upgrade program as we move toward the High-Luminosity LHC.”

This recent appointment builds on a distinguished career in physics and a skillset that makes McBride a dependable and equitable leader.

“She has really good technical and scientific judgment,” says Joel Butler, a physicist at the US Department of Energy’s Fermi National Accelerator Laboratory and the CMS spokesperson between 2016 and 2018. “She knows the terrain and knows what’s important.”

McBride’s interest in particle physics started when her mom, who was a librarian, brought home a library book about cyclotrons. Inspired, McBride built an accelerator facsimile for the eighth-grade science fair. She describes her project as looking like a pinball machine.

“It was terrible,” McBride laughs. “I had no clue.”

McBride received her doctorate at Yale and joined Fermilab as a staff scientist in 1994. One of the most memorable moments from her physics career thus far was the co-discovery of the Higgs boson in 2012 by the CMS and ATLAS experiments.

“I was the head of the Fermilab CMS group at the time,” McBride says. “The announcement happened at around 2 a.m. local time, which was 9 a.m. at CERN. The One West conference room at Fermilab was packed, and then we had an afterparty with alcohol-free champagne and cake.”

For McBride, this was also one of her proudest moments.

“I like to see the collective succeed, rather than the personal,” she says. “I like being part of CMS’s success.”

CMS was designed in the 1990s with the primary goal of searching for the Higgs boson. During her more than 15 years working on CMS, McBride has seen the experiment evolve far beyond its original scope.

“We’re in this period of innovation as we go into the next decade,” McBride says. “There’s going to be a lot of data coming from Run III, and we need to be creative.”

An emerging goal of CMS is to precisely measure the properties of fundamental particles, such as the Higgs boson, to probe new theoretical ideas and test the Standard Model, which describes how all the fundamental particles fit together. The collaboration also will sift through the collisions to look for new particles, especially particles that could explain the nature of dark matter, which accounts for the vast majority of matter in the universe. CMS’s precision measurements combined with creative searches for new physics will enable experimental and theoretical physicists to hone their models and search for links to cosmological phenomena.

Beyond the science, McBride also recognizes that the heart of CMS is its people. With the pandemic taking its toll on individual and interpersonal wellbeing, McBride wants to encourage her collaborators to find new ways to foster relationships.

“One thing that got me through the pandemic has been mentoring postdocs over Zoom,” McBride says. “For me, it’s been a lifesaver and gives me a lot of energy. Even small things can foster people’s mental health, careers and personal growth.”

Over the next 6 months, McBride will work closely with current CMS spokesperson Luca Malgeri as she prepares for her new role.

“This is an exciting and challenging phase for CMS,” Malgeri says. “Patty is an extremely competent and capable leader. I am very happy to leave CMS’s helm in her hands.”

As McBride embarks on this next stage of her career, she says she feels an overwhelming sense of gratitude.

“A working particle accelerator is a gift,” she says. “We need to remember to celebrate our successes, both little and big.”

Editor’s Note: A version of this article was originally published by Fermilab.