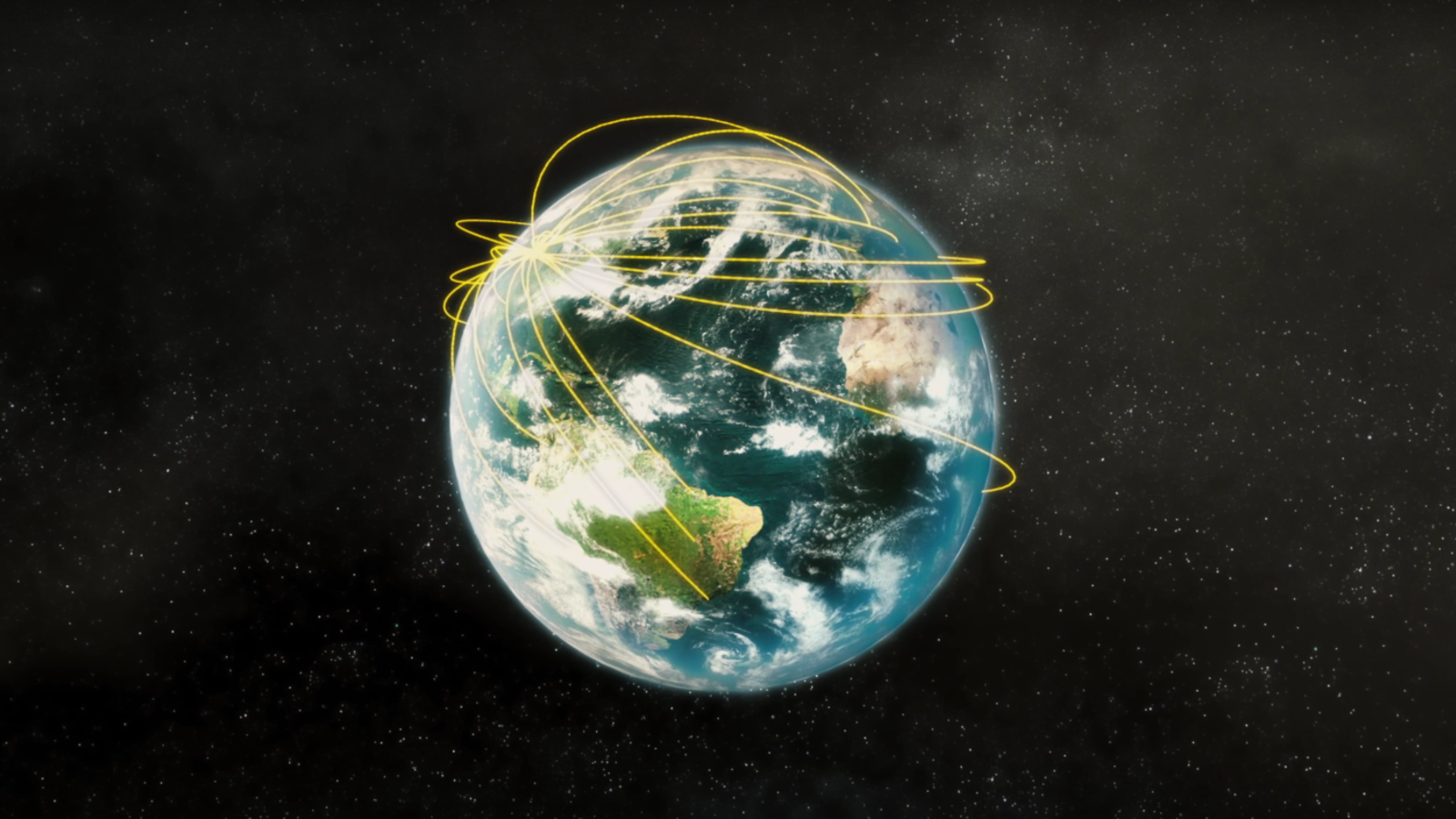 The Deep Underground Neutrino Experiment is a project of superlatives. It will use the world’s most intense neutrino beam and largest neutrino detector to study the weirdest and most abundant matter particles in the universe. More than 800 scientists from close to 30 countries are working on the project to crack some long-unanswered questions in physics. It’s part of a worldwide push to discover the missing pieces that could explain how the known particles and forces created the universe we live in. Here’s a two-minute animation that shows how the project will work:

Here are a few more surprising facts about DUNE you might not know:

1. Engineers will use a mile-long fishing line to aim the neutrino beam from Illinois to South Dakota.

DUNE will aim a neutrino beam 800 miles (1300 kilometers) straight through the Earth from Fermilab to the Sanford Underground Research Facility—no tunnel necessary. Although the beam spreads as it travels, like a flashlight beam, it’s important to aim the center of the beam as precisely as possible at DUNE so that the maximum number of neutrinos can create a signal. Since neutrinos are electrically neutral, they can’t be steered by magnets after they’ve been created. Hence everything must be properly aligned—to within a fraction of a millimeter—when the neutrinos are made, emerging from the collisions of protons with carbon atoms.

Properly aligning the neutrino beam means using the Global Positioning System (GPS) to relate Sanford Lab’s underground map to the coordinates of Fermilab’s geographic system, making sure everything speaks the same location language. Part of the process requires mapping points underground to points on the Earth’s surface. To do this, the alignment crew will drop what might be the longest plumb line in the world down the 4850-foot (1.5-kilometer) mineshaft. The current plan is to use very strong fishing line—a mile of it—attached to a heavy weight that is immersed in a barrel of oil to dampen the movement of the pendulum. A laser tracker will record the precise location of the line.

To create caverns that are large enough to host the DUNE detectors, miners need to blast and remove more than 800,000 tons of rock from a mile underground. That’s the equivalent of 8 Nimitz-class aircraft carriers, a comparison often made by Chris Mossey, project director for the Long-Baseline Neutrino Facility (the name of the facility that will support DUNE). Mossey knows a thing or two about aircraft carriers: He happens to be a retired commander of the US Navy's Naval Facilities Engineering Council and oversaw the engineering, construction and maintenance services of US Navy facilities. But not everyone is that familiar with aircraft carriers, so alternatively you can impress your friends by saying that crews will move the weight equivalent of 2.2 Empire State Buildings, 80 Eiffel Towers, 4700 blue whales or 18 billion(ish) Twinkies.

3. The interior of the DUNE detectors will have about the same average temperature as Saturn’s atmosphere.

Argon, an element that makes up almost one percent of the air we breathe, will be the material of choice to fill the DUNE detectors, albeit in its liquid form. As trillions of neutrinos pass through the transparent argon, a handful will interact with an argon nucleus and produce other particles. Those, in turn, will create light and knock loose electrons. Both can be recorded and turned into data that show exactly when and how a neutrino interacted. To keep the argon liquid, the cryogenics system will have to maintain a temperature of around minus 300 degrees Fahrenheit, or minus 184 degrees Celsius. That’s slightly colder than the average temperature of the icy ammonia clouds on the upper layer of Saturn’s atmosphere.

4. The design of DUNE’s detector vessels is inspired by huge transport ships for gas.

DUNE’s set of four detectors will be the largest cryogenic instrument ever installed deep underground. You know who else needs to store and cool large volumes of liquid? The gas industry, which liquefies natural gas to transport it around the world using huge ships with powerful refrigerators. DUNE’s massive, insulated vessels will feature a membrane system that is similar to that used by liquid natural gas transport ships. A stainless steel frame sits inside an insulating layer, sandwiched between aluminum sheets. Multiple layers provide the strength to keep the liquid argon right where it should be—interacting with neutrinos.

5. DUNE will look for more than just neutrinos.

Then why did they name the experiment after the neutrino? Well, most of the experiment is designed to study neutrinos—how they change as they move through space, how they arrive from exploding stars, how neutrinos differ from their antimatter partners, and how they interact with other matter particles. At the same time, the large size of the DUNE detectors and their shielded location a mile underground also make them the perfect tool to continue the search for signs of proton decay. Some theories predict that protons (one of the building blocks that make up the atoms in your body) have a very long but finite lifetime. Eventually they will decay into other particles, creating a signal that DUNE hopes to discover. Fortunately for our atoms, the proton’s estimated lifespan is much longer than the time our universe has existed so far. Because proton decay is expected to be such a rare event, scientists need to monitor lots of protons to catch one in the act—and seventy thousand tons of argon atoms means around 1034 protons (that’s a 1 with 34 zeroes after it), which isn’t too shabby.