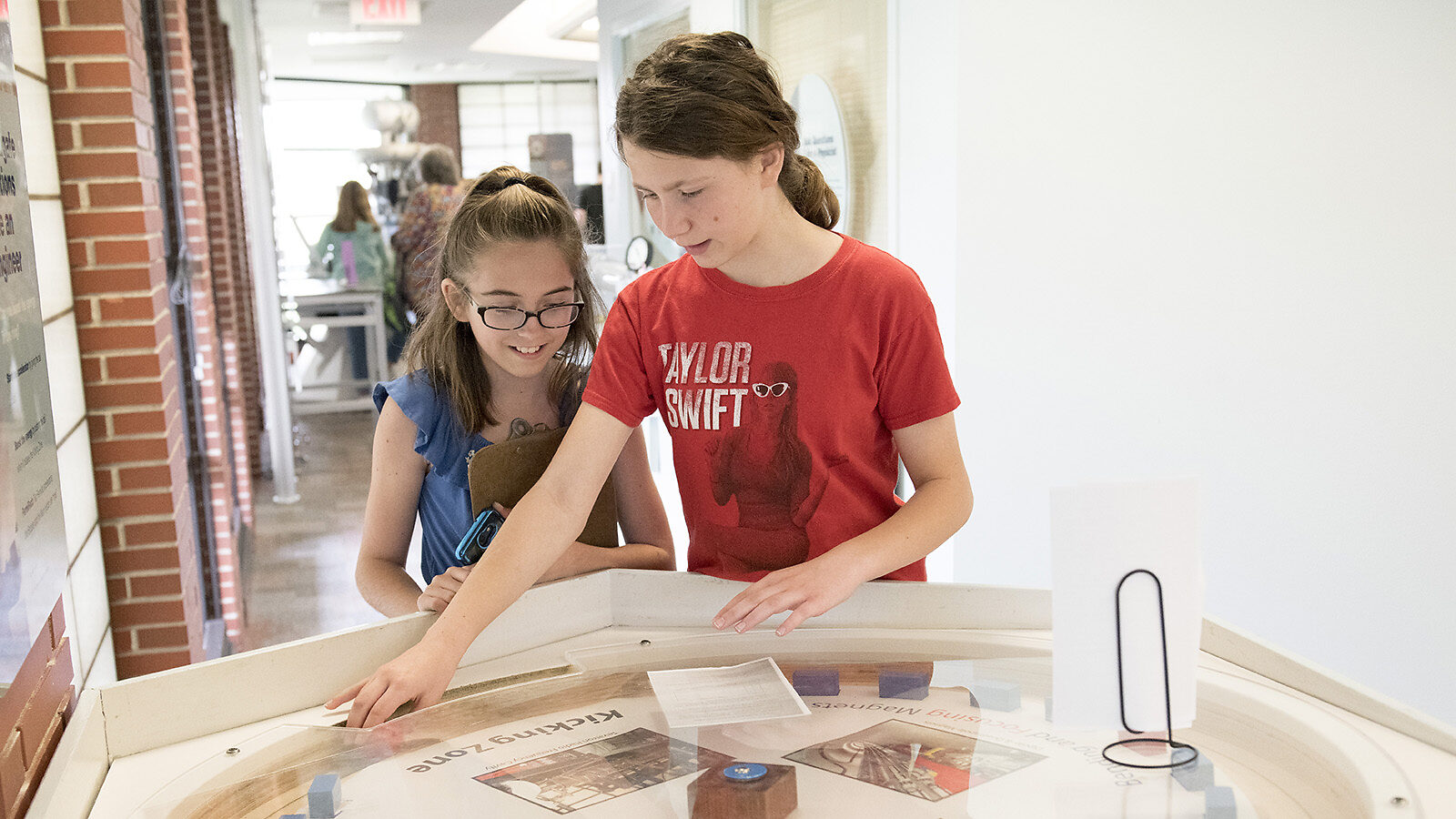 In March 2020, Ketevan Akhobadze, an exhibit developer for the Lederman Science Center, turned off the power and watched the mist disappear from the center’s cloud chamber—a simple particle detector used to teach visitors about cosmic rays.

Normally, the science center—located at the US Department of Energy’s Fermi National Accelerator Laboratory—is filled with school groups and families exploring the laws of physics through interactive exhibits. But due to the coronavirus pandemic, the center is temporarily closed. Over the past year, Fermilab’s Education and Public Engagement (EPE) Office has continued to bring Fermilab science to the public by taking many of its programs virtual.

Luckily, Akhobadze has a knack for creating in seclusion. “I was an only child,” she says, “and my grandma would watch me while both my parents were at work. I had a lot of time for myself, and I would spend it in our large garden exploring and building.”

Akhobadze picked the habit back up again while working for the EPE Office from home. With the help of her teenage daughter, Ellen, and under the watchful eye of their dog, Brownie, she created several DIY physics activities, virtual exhibits and short videos.

Now, she wants to continue with the other part of her job: sharing her projects with anyone who wants to learn. Fermilab EPE regularly features videos of exhibits on social media, and here, Akhobadze shares how to create a selection of those exhibits at home.

Akhobadze recommends that DIY activities be conducted under adult supervision.

Don’t have space for a Large Hadron Collider at home? This simple exhibit shows how an accelerator works without the need of a 17-mile underground ring.

Many particle accelerators push subatomic projectiles, such as protons, with standing radio waves, waves whose peaks and troughs stay in the same position as their electric and magnetic fields oscillate up and down and sideways. The charged particles interact with the waves and ride the peaks of their electric fields to gain momentum.

Create a ping-pong-ball accelerator by using two swinging pendulums to push a ball along a track.

Gravity got you down? Turns out stars and planets feel the same! This demo shows the relationship between mass, gravity and the curvature of spacetime.

In 1916, Albert Einstein revolutionized physics when he proposed the general theory of relativity: the theory that spacetime behaves like a flexible fabric that is stretched and deformed by massive objects. Curvatures in spacetime determine the strength of the pull of gravity near an object, something we can see in the universe as both light and the orbits of planets bend around massive stars.

Simulate the general theory of relativity by building a miniature universe with flexible spacetime.

With safety pins, hang a mass underneath the spacetime. Can you guess the size of the mass based on the trajectory of the projectiles?

This is how physicists measure the amount dark matter in the universe. Dark matter is plentiful and warps spacetime but has so far evaded other forms of detection.

Can’t find your microscope? No need! This exhibit shows how scientists can determine the shape and structure of microscopic objects by scattering subatomic particles off of them.

In the early 1900s, a team of physicists lead by Ernest Rutherford fired alpha particles at a thin leaf of gold foil. Most of the particles passed straight through, but a few rebounded in odd directions. This experiment led to the discovery of the atomic nucleus, the part of the gold atoms that sent the alpha particles ricocheting away.

Since then, scientists and engineers have used particle scattering to determine the microscopic structures of everything from proteins to tractor parts.

Determine the shape of a hidden object by studying how ball bearings bounce off of it.

Map how the ball bearings ricochet off of different known surface types (curved, straight, slanted, etc.). Then ask your lab assistant to find a new object to hide under the cover. Roll the ball bearing at the new hidden object from multiple angles. Can you guess the shape and size of the new object based on the scattering patterns?

Did you know that subatomic particles can morph? This exhibit uses pendulums to demonstrate this bizarre property in a type of fundamental particle called neutrinos.

Swing one of the pendulums perpendicular to the suspended support string. What happens to the static pendulum? Keep watching for a few more minutes. Do you see any patterns?

Neutrinos have 3 possible identities: electron, muon and tau. Can you build a system with three pendulums in which the energy is transferred between all of them?

Ever wondered why light bulbs have mass but the light they produce does not? This last exhibit shows how the Higgs field interacts with some particles while ignoring others.

The Higgs field permeates every inch of spacetime. Particles such as quarks (found inside protons, among other particles) interact with the Higgs field and gain mass. But other particles, such as photons (which you might know as “particles of light”), cruise through and remain massless.

Create a Higgs field out of iron sand to simulate how some particles gain mass while others do not.

Place a powerful magnet under your Higgs field and see if you can clump some of the magnetic sand together. The clump of magnetic sand represents a Higgs boson, which is born when the energy from colliding particles is transferred into the Higgs field.