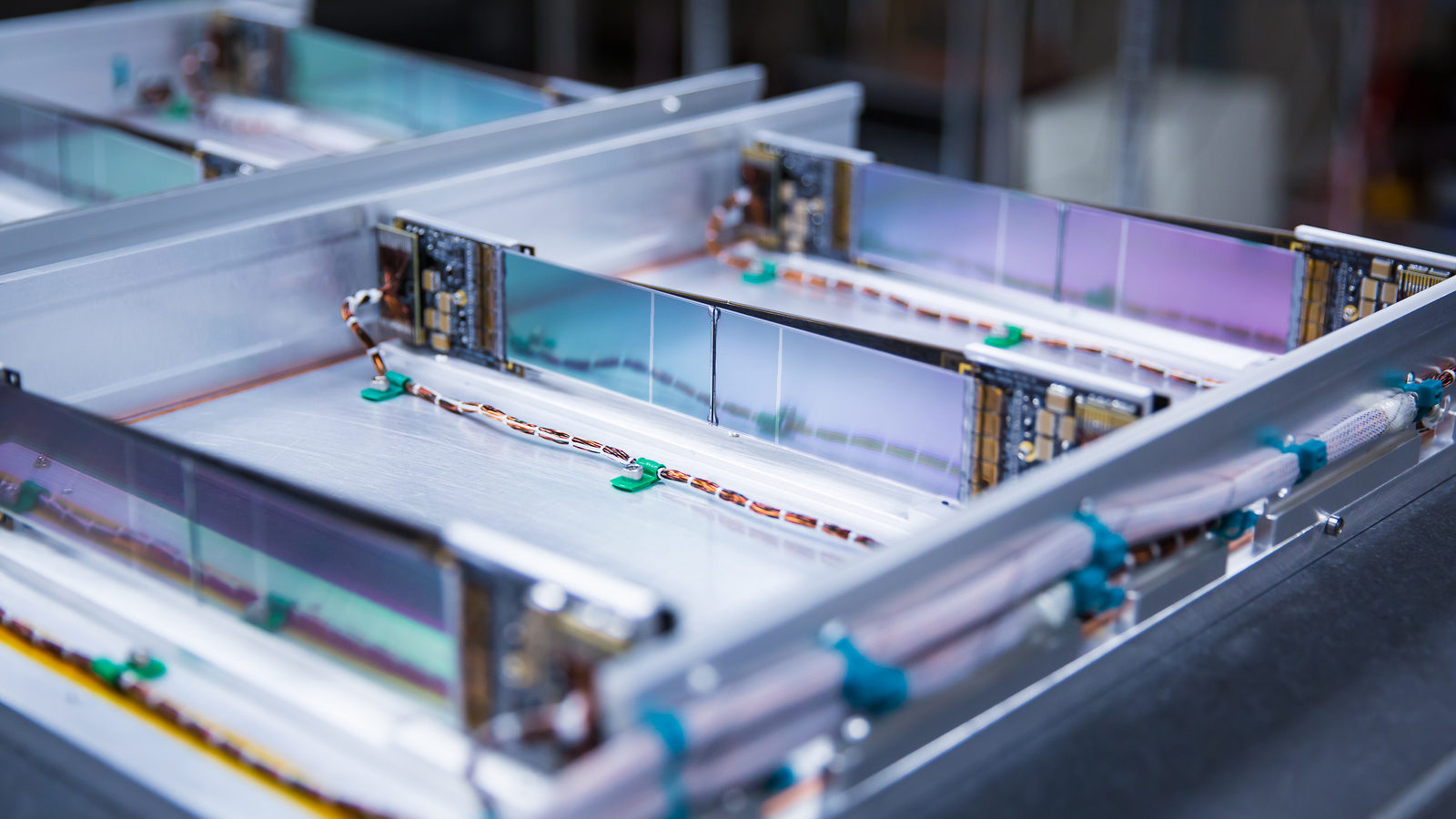 In 2015, a group of researchers installed a particle detector just half of a millimeter away from an extremely powerful electron beam. The detector could either start them on a new search for a hidden world of particles and forces called the “dark sector”—or its sensitive parts could burn up in the beam.

Earlier this month, scientists presented the results from that very first test run at the Heavy Photon Search collaboration meeting at the US Department of Energy’s Thomas Jefferson National Accelerator Facility. To the scientists’ delight, the experiment is working flawlessly.

Dark sector particles could be the long-sought components of dark matter, the mysterious form of matter thought to be five times more abundant in the universe than regular matter. To be specific, HPS is looking for a dark-sector version of the photon, the elementary “particle of light” that carries the fundamental electromagnetic force in the Standard Model of particle physics.

To search for dark photons, the HPS experiment uses a very intense, nearly continuous beam of highly energetic electrons from Jefferson Lab’s CEBAF accelerator. When slammed into a tungsten target, the electrons radiate energy that could potentially produce the mystery particles. Dark photons are believed to quickly decay into pairs of electrons and their antiparticles, positrons, which leave tracks in the HPS detector.

“Dark photons would show up as an anomaly in our data—a very narrow bump on a smooth background from other processes that produce electron-positron pairs,” says Omar Moreno from SLAC National Accelerator Laboratory, who led the analysis of the first data and presented the results at the collaboration meeting.

The challenge is that, due to the large beam energy, the decay products are compressed very narrowly in beam direction. To catch them, the detector must be very close to the electron beam. But not too close—the smallest beam movements could make the beam swerve into the detector. Even if the beam doesn’t directly hit the HPS apparatus, electrons interacting in the target can scatter into the detector and cause unwanted signals.

The HPS team implemented a number of precautions to make sure their detector could handle the potentially destructive beam conditions. They installed and carefully aligned a system to intercept any large beam motions, made the detector’s support structure movable to bring the detector close to the beam and measure the exact beam position, and installed a feedback system that would shut the beam down if its motions were too large. They also placed their whole setup in vacuum because interactions of the beam with gas molecules would create too much background. Finally, they cooled the detector to negative 30 degrees Fahrenheit to reduce the effects of radiation damage. These measures allowed the team to operate their experiment so close to the beam.

“That’s maybe as close as anyone has ever come to such a particle beam,” says John Jaros, head of the HPS group at SLAC, which built the innermost part of the HPS detector, the Silicon Vertex Tracker. “So, it was fairly exciting when we gradually decreased the distance between the detector and the beam for the first time and saw that everything worked as planned. A large part of that success lies with the beautiful beams Jefferson Lab provided.”

SLAC’s Mathew Graham, who oversees the HPS analysis group, says, “In addition to figuring out if we can actually do the experiment, the first run also helped us understand the background signals in the experiment and develop the data analysis tools we need for our search for dark photons.”

So far, the team has seen no signs of dark photons. But to be fair, the data they analyzed came from just 1.7 days of accumulated running time. HPS collects data in short spurts when the CLAS experiment, which studies protons and neutrons using the same beam line, is not in use.

A second part of the analysis is still ongoing: The researchers are also closely inspecting the exact location, or vertex, from which an electron-positron pair emerges.

“If a dark photon lives long enough, it might make it out of the tungsten target where it was produced and travel some distance through the detector before it decays into an electron-positron pair,” Moreno says. The detector was specifically designed to observe such a signal.

Jefferson Lab has approved the HPS project for a total of 180 days of experimental time. Slowly but surely, HPS scientists are finding chances to use it.