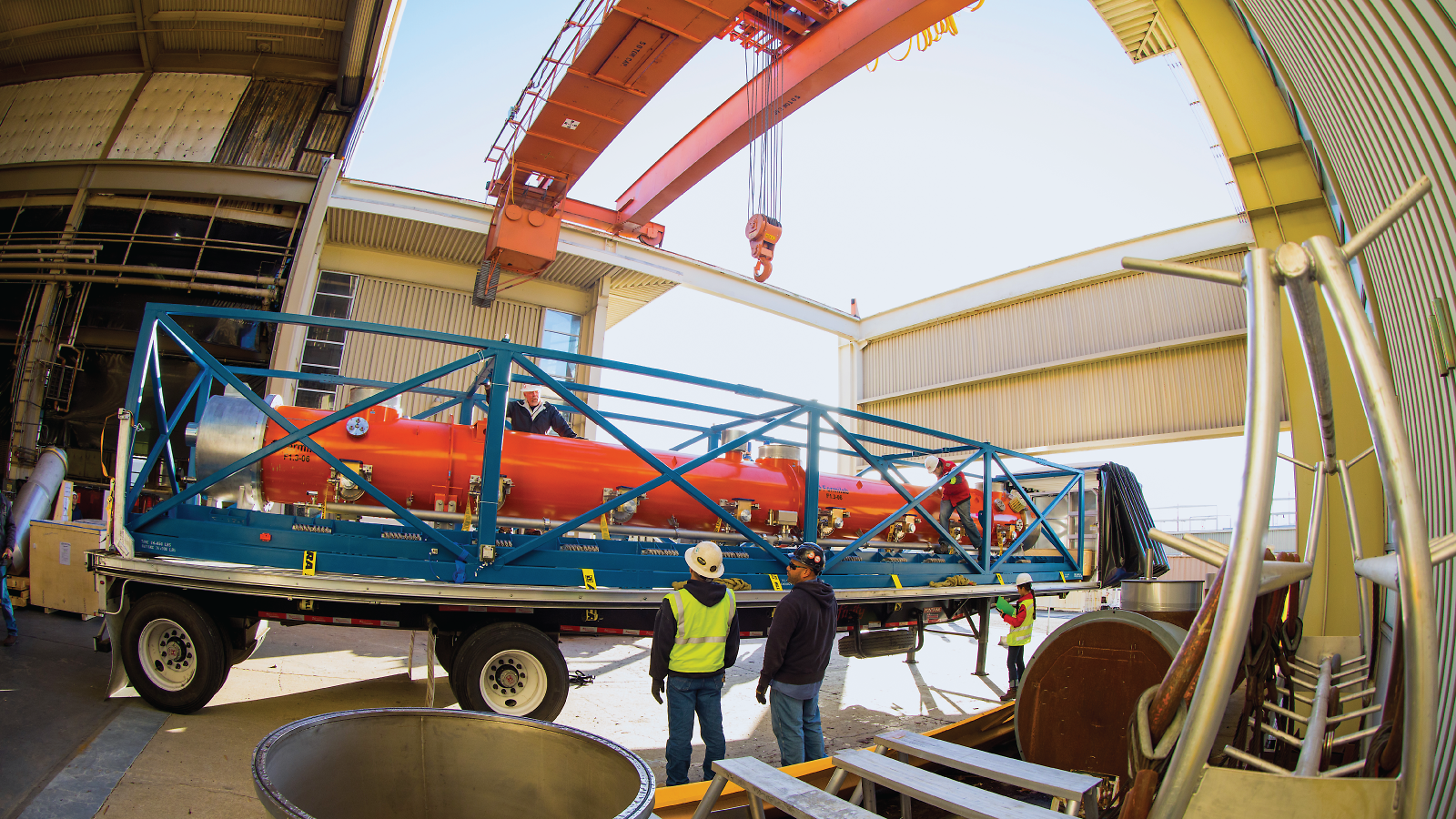 Earlier this week, scientists and engineers at the US Department of Energy’s Fermi National Accelerator Laboratory in Illinois loaded one of the most advanced superconducting radio-frequency cryomodules ever created onto a truck and sent it heading west.

Today, that cryomodule arrived at SLAC National Accelerator Laboratory in California, where it will become the first of 37 powering a 3-mile-long machine that will revolutionize atomic X-ray imaging. The modules are the product of many years of innovation in accelerator technology, and the first cryomodule Fermilab developed for this project set a world record in energy efficiency.

These modules, when lined up end to end, will make up the bulk of the accelerator that will power a massive upgrade to the capabilities of the Linac Coherent Light Source at SLAC, a unique X-ray microscope that will use the brightest X-ray pulses ever made to provide unprecedented details of the atomic world. Fermilab will provide 22 of the cryomodules, with the rest built and tested at Thomas Jefferson National Accelerator Facility in Virginia.

The quality factor achieved in these components is unprecedented for superconducting radio-frequency cryomodules. The higher the quality factor, the lower the cryogenic load, and the more efficiently the cavity imparts energy to the particle beam. Fermilab’s record-setting cryomodule doubled the quality factor compared to the previous state-of-the-art.

“LCLS-II represents an important technological step which demonstrates that we can build more efficient and more powerful accelerators,” says Fermilab Director Nigel Lockyer. “This is a major milestone for our accelerator program, for our productive collaboration with SLAC and Jefferson Lab and for the worldwide accelerator community.”

Today’s arrival is merely the first. From now into 2019, the teams at Fermilab and Jefferson Lab will build the remaining cryomodules, including spares, and scrutinize them from top to bottom, sending them to SLAC only after they pass the rigorous review.

“It’s safe to say that this is the most advanced machine of its type,” says Elvin Harms, a Fermilab accelerator physicist working on the project. “This upgrade will boost the power of LCLS, allowing it to deliver X-ray laser beams that are 10,000 times brighter than it can give us right now.”

With short, ultrabright pulses that will arrive up to a million times per second, LCLS-II will further sharpen our view of how nature works at the smallest scales and help advance transformative technologies of the future, including novel electronics, life-saving drugs and innovative energy solutions. Hundreds of scientists use LCLS each year to catch a glimpse of nature’s fundamental processes.

To meet the machine’s standards, each Fermilab-built cryomodule must be tested in nearly identical conditions as in the actual accelerator. Each large metal cylinder—up to 40 feet in length and 4 feet in diameter—contains accelerating cavities through which electrons zip at nearly the speed of light. But the cavities, made of superconducting metal, must be kept at a temperature of 2 Kelvin (minus 456 degrees Fahrenheit).

To achieve this, ultracold liquid helium flows through pipes in the cryomodule, and keeping that temperature steady is part of the testing process.

“The difference between room temperature and a few Kelvin creates a problem, one that manifests as vibrations in the cryomodule,” says Genfa Wu, a Fermilab scientist working on LCLS-II. “And vibrations are bad for linear accelerator operation.”

In initial tests of the prototype cryomodule, scientists found vibration levels that were higher than specification. To diagnose the problem, they used geophones—the same kind of equipment that can detect earthquakes—to rule out external vibration sources. They determined that the cause was inside the cryomodule and made a number of changes, including adjusting the path of the flow of liquid helium. The changes worked, substantially reducing vibration levels to a 10th of what they were originally, and have been successfully applied to subsequent cryomodules.

Fermilab scientists and engineers are also ensuring that unwanted magnetic fields in the cryomodule are kept to a minimum, since excessive magnetic fields reduce the operating efficiency.

“At Fermilab, we are building this machine from head to toe,” Lockyer says. “From nanoengineering the cavity surface to the integration of thousands of complex components, we have come a long way to the successful delivery of LCLS-II’s first cryomodule.”

Fermilab has tested seven cryomodules, plus one built and previously tested at Jefferson Lab, with great success. Each of those, along with the modules yet to be built and tested, will get its own cross-country trip in the months and years to come.