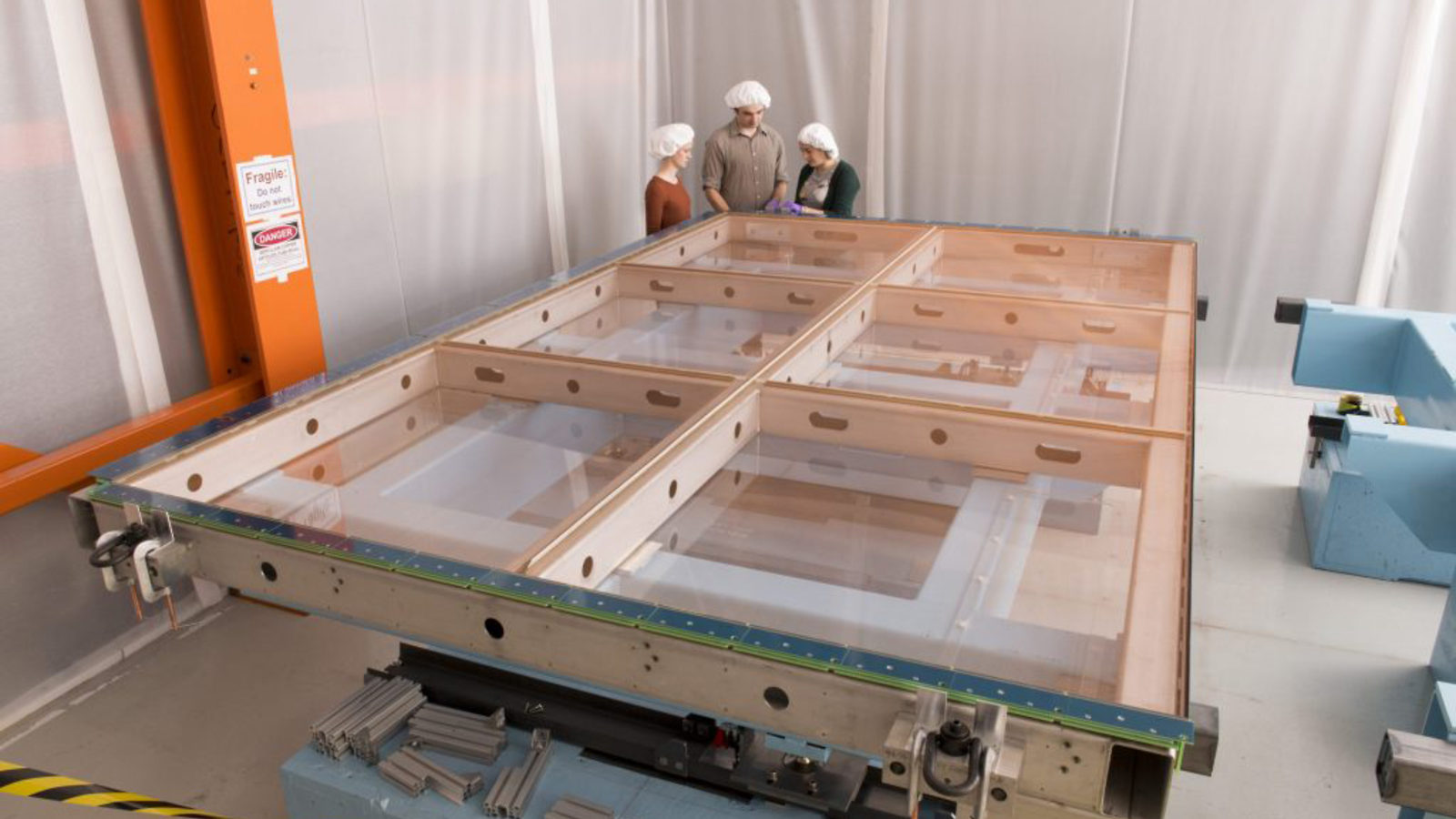 Major components for a new neutrino experiment at the US Department of Energy’s Fermi National Accelerator Laboratory are arriving at the lab from around the world. The components will be used in the upcoming Short-Baseline Near Detector, an important piece of the laboratory’s neutrino program. The first of four anode plane assemblies, highly sensitive electronic components, came to Fermilab in October. More are on their way.

SBND is one of three particle detectors that make up the Short-Baseline Neutrino program at Fermilab. Neutrinos, renegade particles that are famously difficult to study, could provide scientists with clues about the evolution of the universe.

The Short-Baseline Neutrino program, or SBN, focuses its search on a particular type of neutrino, called the sterile neutrino, which could be the explanation for unexpected results seen in several past neutrino experiments. The particle’s existence has been teased but never clearly confirmed.

SBND will also be a testing ground for some of the technologies, including the anode plane assemblies, that will be used in the international Deep Underground Neutrino Experiment, known as DUNE, a megascience experiment hosted by Fermilab that is currently under construction in South Dakota.

Fermilab’s three Short-Baseline Neutrino detectors will be positioned at various distances along the path of a neutrino beam generated by Fermilab’s particle accelerators.

“The reason you have three detectors is that you want to sample the neutrino beam along the beamline at different distances,” says Ornella Palamara, SBND co-spokesperson and neutrino scientist at Fermilab.

Of the three, SBND will be the nearest to the beam source at a distance of 110 meters. The other two, MicroBooNE and ICARUS, are 470 meters and 600 meters from the source, respectively. MicroBooNE has been taking data since 2015. ICARUS, installed earlier this year, is expected to begin taking data in 2019.

As neutrinos pass through one detector after the other, some of them leave behind traces in the detectors. SBN scientists will analyze this information to search for firm evidence of the hypothesized but never seen member of the neutrino family.

Neutrinos come in one of three lepton flavors, or types, which correspond to three other particles: electron, muon and tau. They change from one flavor into another as they travel through space, a behavior called oscillation. Neutrinos are known to oscillate in and out of the three flavors, but only further evidence will help scientists determine whether they also oscillate into a fourth type—a sterile neutrino.

SBN scientists will look for signs of neutrinos oscillating into the new type.

“The overall goal of the SBN program is to perform a definitive measurement that tests the possibility of sterile neutrino oscillations,” Palamara says.

Sterile neutrinos are hypothetical particles that don’t interact with matter at all. (The neutrinos we’re familiar with do interact, but only rarely.) In 1995, results from the LSND experiment at Los Alamos National Laboratory hinted at the possibility of the sterile neutrino’s existence, but so far, no one has confirmed it. Results from the MiniBooNE experiment at Fermilab also indicate that something is going on with neutrinos that we don’t yet fully understand.

SBND, as the first detector in the beam, will record the number of electron and muon neutrinos that pass through it before oscillation can occur. The vast majority of them—about 99.5 percent—will be muon neutrinos. By the time of their arrival at the far detectors, MicroBooNE and ICARUS, a few out of every thousand muon neutrinos may have converted into electron neutrinos.

“The SBN program is powerful because you can measure this oscillation by looking at two different effects,” Palamara says.

The other is that the far detectors see fewer muon neutrinos than expected—the muon neutrinos spotted in SBND “disappear”—because they converted into sterile neutrinos.

Either effect could indicate the existence of the new particle.

“Having a single experiment where we can see electron neutrino appearance and muon neutrino disappearance simultaneously and make sure their magnitudes are compatible with one another is enormously powerful for trying to discover sterile neutrino oscillations,” says David Schmitz, SBND co-spokesperson and assistant professor at the University of Chicago. “The near detector substantially improves our ability to do so.”

SBND will be a 4-by-4-by-5-meter tank—the size of a large bedroom—filled with liquid argon. Its active liquid-argon mass—the volume monitored by the anode plane assemblies, or APAs—comes to 112 tons. The APAs, situated inside the detector, are huge frames covered with thousands of delicate sense wires. An electric field lies between the wire planes and a cathode plane.

When a neutrino collides with the nucleus of an argon atom, charged particles are produced. These particles stream through the liquid volume, ionizing argon atoms as they pass by. The ionization produces thousands of free electrons, which “drift” under the influence of the electric field toward the APAs, where they are detected. By collecting these clouds of electrons on the wires, scientists create detailed images of the tracks of the particles emerging from a collision, which give information about the original neutrino that triggered the interaction.

The APA technology will also be an integral part of DUNE, which will be the world’s largest liquid-argon neutrino detector when complete. The National Science Foundation recently funded a planning grant for DUNE’s anode plane assemblies; the NSF has a long history of pioneering investments in major particle physics experiments, including several neutrino experiments.

Institutions in Europe, South America and the United States are helping build SBND’s various components. In all, more than 20 institutions on three continents are involved in the effort. Another dozen are collaborating on software tools to analyze data once the detector is operational, Schmitz says.

“Being part of an international collaboration is great,” Palamara says. “Of course, there are challenges, but it’s fantastic to see people coming from all around the world to work on the program. Having pieces of the detector built in different places and then seeing everything come together is exciting.”

Assembly of SBND is expected to finish in fall 2019, after which the detector will be installed in its building along the accelerator-generated neutrino beam. SBND is scheduled to be commissioned and begin receiving beam in June 2020.