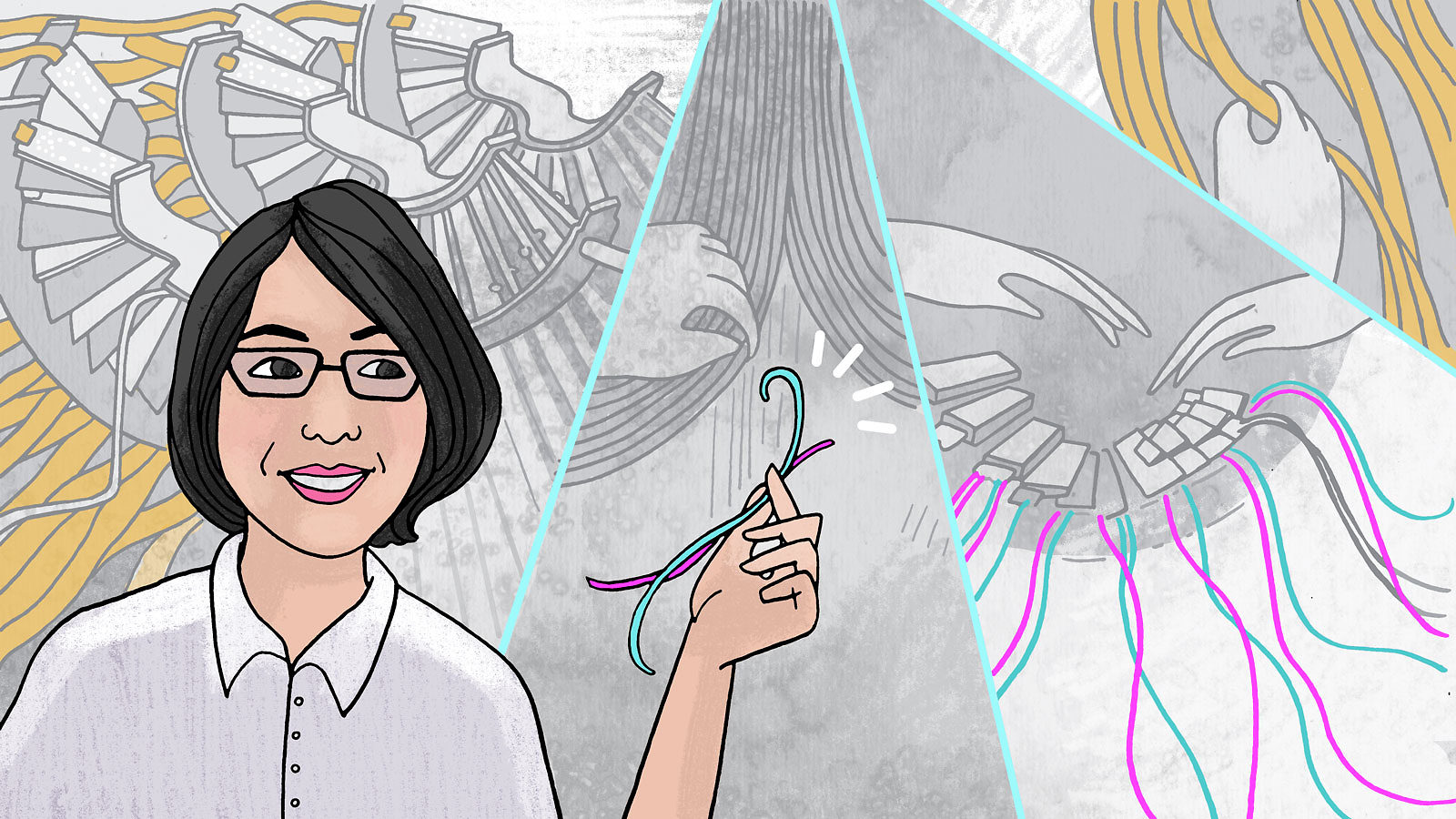 Francesca Ricci-Tam remembers an organic chemistry lab she took during her undergraduate studies, before she became a physicist.

“The professor told us that the vacuum tubes were very expensive and delicate and that we shouldn’t destroy them,” she recalls.

“I never considered myself very good at lab work,” she says. “I was very awkward.”

The student who bashfully cleaned shards of glass from her lab bench is now a hardware specialist building electronics for one of the largest scientific experiments in the world. Over time, she has learned that this work is a skill to be learned through practice and that early mistakes like hers with the vacuum tube are an essential part of the process.

Facing a fear of failure

Ricci-Tam entered the University of California, Davis in 2006 as a premed student with a double major in biochemistry and physics. She was home-schooled for most of her education and had very little experience working with her hands.

She describes herself as a perfectionist, a trait she struggled with while adjusting to the laboratory. “I was always worried about adding one too many drops of solution or breaking something,” she says.

After being rejected from several medical schools, she was faced with two choices: Take a year to gain more experience through a clinical internship and then try again, or change course and apply to graduate school in physics. She chose the latter.

Being a physicist requires learning the basic principles and equations that describe matter, and then performing experiments to test and possibly push beyond them. The transition from the classroom into the laboratory is where the next generation of physicists learns what being an experimentalist is all about—and that possessing a high level of intelligence means very little if you don’t cultivate an accompanying amount of persistence and just plain do the hard work.

A few years into her PhD, Ricci-Tam’s advisor asked her to help the UC Davis team build components for the 14,000-ton CMS detector, which a collaboration of about 4000 scientists use to study the collisions generated by the Large Hadron Collider at CERN.

Ricci-Tam had never done anything like it. She closely watched her colleagues as they unscrewed electronics and attached cables to the CMS pixel detector.

She remembers flipping into a completely different mindset when it was her turn to work with the electronics. “I would be completely focused—and panic later,” she says.

One day, a colleague told her that she worked like a surgeon. Ricci-Tam says the comment changed her perception of herself. “I thought, I can do this,” she says.

“I’ve been doing hardware work on and off ever since.”

The more Ricci-Tam worked on hardware, the more she discovered her own capabilities. As she gained experience and confidence, she began to find a balance between being completely focused and relaxed while working on tasks. She gradually let go of her perfectionist mindset and learned to give herself more space and time to work through problems.

“You cannot afford to be a perfectionist,” she says. “Working on hardware teaches you patience.” 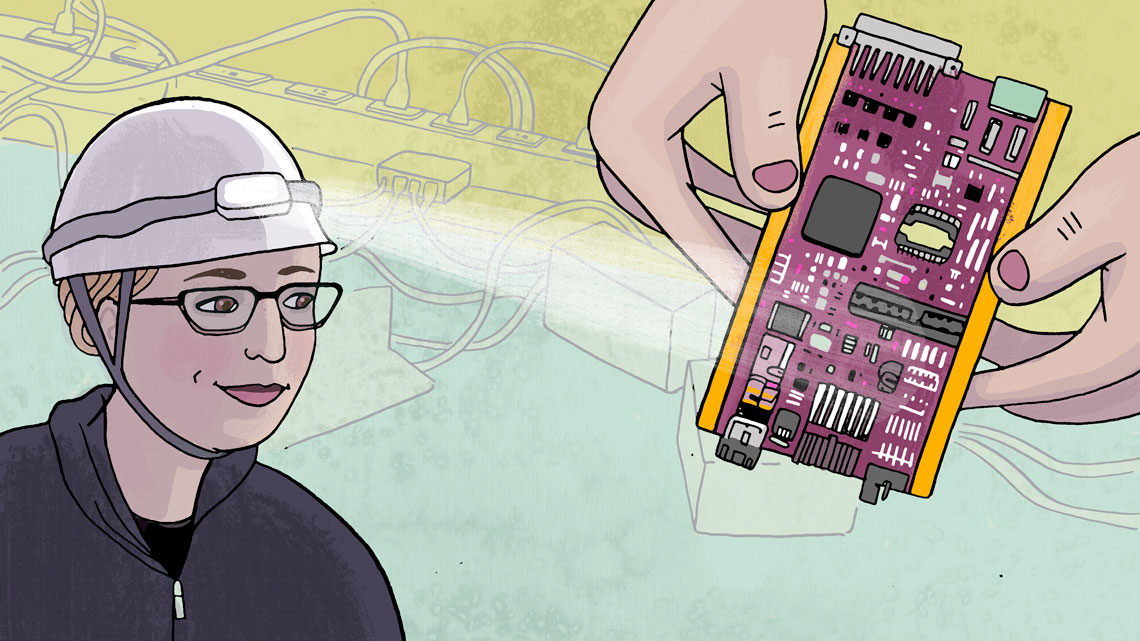 Ricci-Tam is now a postdoctoral researcher at the University of Maryland working on upgrades to the Hadronic Calorimeter, a part of the CMS detector that records the energy and trajectory of fundamental particles called quarks.

Scientists are preparing CMS for the High-Luminosity LHC, an upgrade to the LHC that will increase the collision rate by a factor of 10 and provide scientists with the huge amount of data they need to look for and study rare subatomic processes. The upgrades will make the CMS detector both more robust and more sensitive to the tiny particles produced in the collisions.

Last winter, Ricci-Tam started working with University of Virginia graduate student Grace Cummings on assembling and testing new electronics for the calorimeter called ngCCMs: “Next Generation Clock Control Module.” Cummings was the resident expert on the project, and Ricci-Tam was impressed with her organization and self-assurance. The two soon became friends.

“I’m not a very confident person, so I look to other people to learn how to be more confident,” Ricci-Tam says. “Grace is one of them.”

Unlike Ricci-Tam, Cummings started her pursuit of experimental physics with a strong desire to work on hardware. Cummings connects it to the satisfaction she found building massive towers out of blocks and creating three-dimensional sculptures during her art classes as a kid. “I’ve always liked working with my hands,” Cummings says. “It makes me feel connected to my work.”

She applied to colleges as a physics major and early on knew she wanted to go to graduate school. “I knew I wouldn’t be happy if I wasn’t asking questions and answering them,” she says.

During a summer internship at the US Department of Energy’s Fermi National Accelerator Laboratory, she was introduced to particle physics hardware and how a detector actually works. “I learned what scintillators are and how wavelength shifters work,” she says. “I got really excited. I wrote about how I wanted to do hardware in my graduate school applications.”

Working on hardware showed Cummings that part of being an experimentalist is looking to answer questions she never realized she would need to ask—including “What’s that smudge?”

In summer 2018 Cummings was tasked with inspecting freshly arrived electronics for the CMS calorimeter at Fermilab. She and her colleagues found an entire shipment of circuit boards, each with a strange blotch on one side.

“It wouldn’t come off, so we thought it might be something intrinsic to the printed circuit board,” Cummings says. “These are going to be in detector for the rest of the lifetime of CMS, so we want to make sure that everything is as perfect as it possibly can be and think about all the ways it could fail. Even if you don’t think something’s a big deal, it could become a big deal later.”

They ran through a series of tests and inspections, and the cards all seemed to be functioning as expected. She and her colleagues were scratching their heads when one of them thought to ask how the electronics had been packaged.

“It turns out that the Fermilab logo hadn’t been completely dry when they were packaged,” Cummings says. “Those were our white smudges: the imprint of the screen-printing ink.”

Cummings and her colleagues laugh about the situation today, but they know the work they do has serious implications for the experiments they’re building and repairing.

Cummings says every time she goes underground to install electronics in the four-story CMS detector, she is amazed at just how important every little piece becomes. “Working on hardware for me has been the biggest thing that shows why CMS signs all its papers as ‘CMS collaboration,’” she says. “I’m flabbergasted it works. It’s really a wonder.

“At the same time, I know how much time, effort and love I put into my work. If everyone cares half as much as I care, we’ll be fine.”