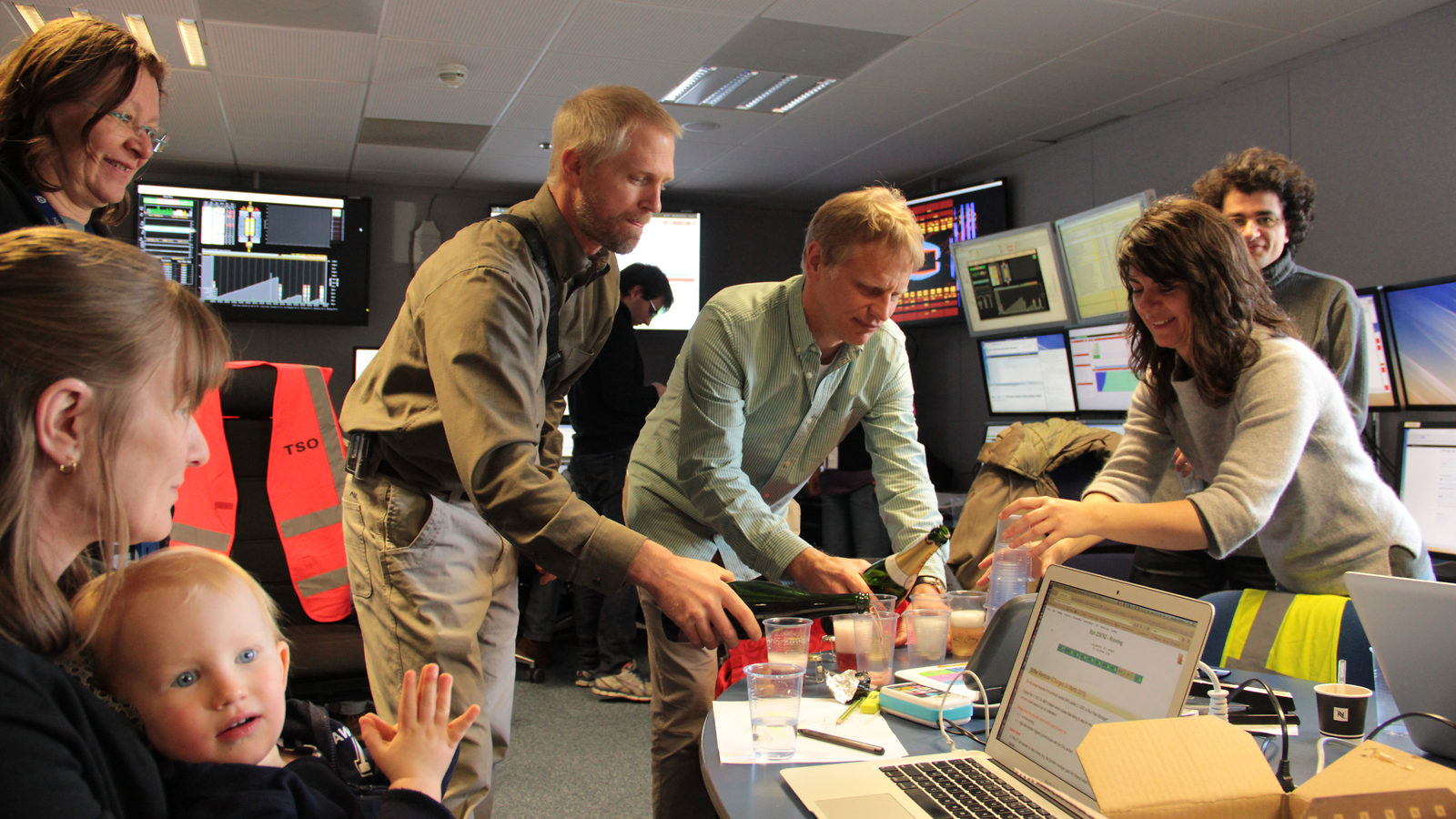 What’s it like working on experiments over the holidays?

For many, the winter holiday season means a few days off, a time for family and friends and food. But for some, it means conducting massive physics experiments that don’t take time off to celebrate.

“Once you have a big device going, simply in terms of taxpayer dollars, it takes a lot of money to maintain it, even if it’s not running,” says Greg Rakness, run coordinator for the CMS experiment at the Large Hadron Collider at CERN. “So what do you do with the time you have? You run it.”

And you run the experiment whenever it’s ready to run. That’s why many physicists and technicians found themselves at CERN earlier this year over the Easter holiday. Despite the fact that Easter is a traditionally big holiday in Europe, physicists preferred to come in and work when the machine was ready for beam rather than postpone the restart.

“We like what we do here, and we know that part of the job is to have the detector up and running when the LHC has particles in the machine,” Rakness says. “How are you going to discover something new if you don’t stand up and deliver? Nature isn’t going to come give it to us. You have to go get it.”

The LHC experiments do shut down over the winter holidays at CERN due to the high cost of electricity during that coldest part of the year. But the LHC itself—which is painstakingly cooled to cryogenic temperatures one sector at a time—isn’t so easy to turn back on once it is shut off. So it continues to hum along without the particles.

Technicians who volunteer to come in during break to maintain the technical infrastructure—things like ventilation, electricity, cooling systems, machine access and fire detection—arrive for work and often share a big home-cooked meal, prepared in the kitchen adjacent to the control center. Families often come in, as does a group of on-call personnel that can’t go out and do much else anyway.

“One New Year’s Eve, we managed to have so much fun that the afternoon shift stayed until the next morning,” says Jesper Nielsen, section leader of technical infrastructure who has spent the last 12 years on a Christmas or New Year’s shift. 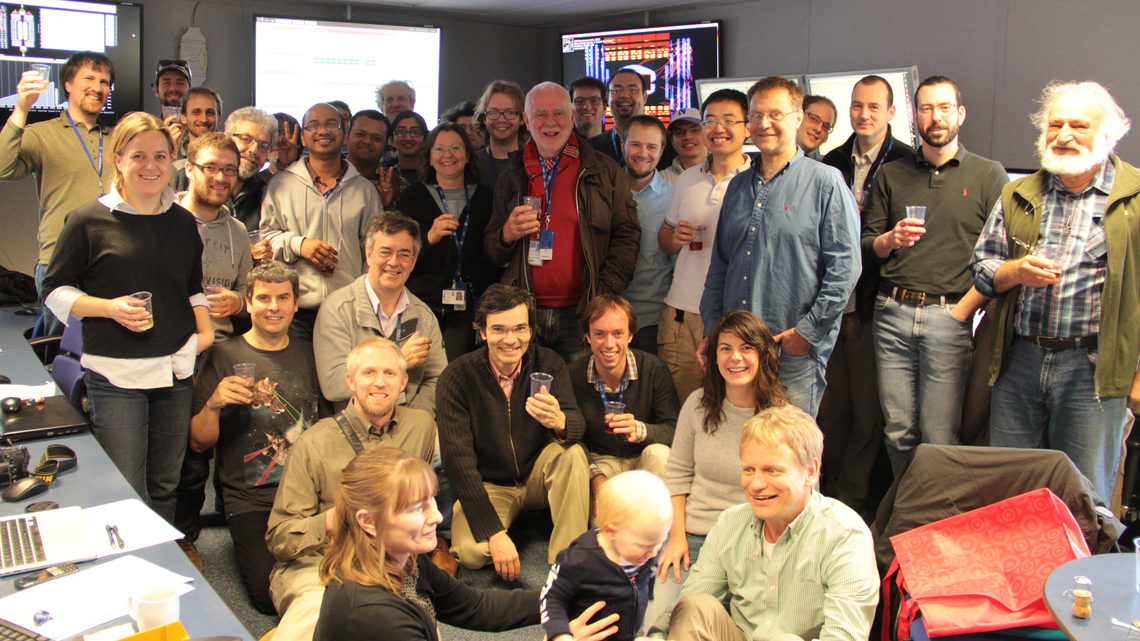 A toast in the CMS control room on Easter Sunday

Because the accelerator is stopped, the atmosphere is more quiet and relaxed. If there’s a problem, technicians can take a bit longer to dig in and really understand what’s happening with the systems. Some of the volunteers watching the infrastructure come from other accelerator control centers, and they use this time to learn about systems they don’t normally use or to access more exotic parts of the accelerator.

Of course, with fewer people available, it can also take longer to solve problems. One Christmas, a complete power cut meant that the holiday turkey never made it in the oven. On a New Year’s Eve, the alarm system went down, and the only way to fix it was writing and updating a script every hour to reset the systems. One Christmas, they used webcams to monitor a Santa doll placed in a computer room that was experiencing flooding, checking the levels by seeing whether he remained above water.

“It’s always good fun,” Nielsen says. “The only problem with it is you’re a bit tired and haven’t seen your family when everyone else returns. You’re not synchronized with everyone else.”

The amount of celebration at a shift depends, naturally, on the type of people working it. Crews working in the accelerator complex for Fermi National Accelerator Laboratory have evolved traditions such as pizza on Wednesday evenings or making breakfast around 2 a.m. on long midnight-shift weekends, and it often extends to the holidays. People bring in pie on Pi Day (March 14) and contribute to Thanksgiving potlucks and food drives.

In December, Fermilab’s control room also features a Christmas tree known as the Intensity Tree. The lights on the decorations are set up to correspond to the intensity of the beam in the Main Injector. More beam means more lights, updated in real time (every 1.33 seconds when a beam pulse travels through the machine).

“The Pre-Accelerator Department also usually puts up a tree on top of the old Cockcroft-Walton [pre-accelerator] and strings ornaments that have symbols on them representing substances that are important to source operation,” says Cindy Joe, senior accelerator operator at Fermilab. 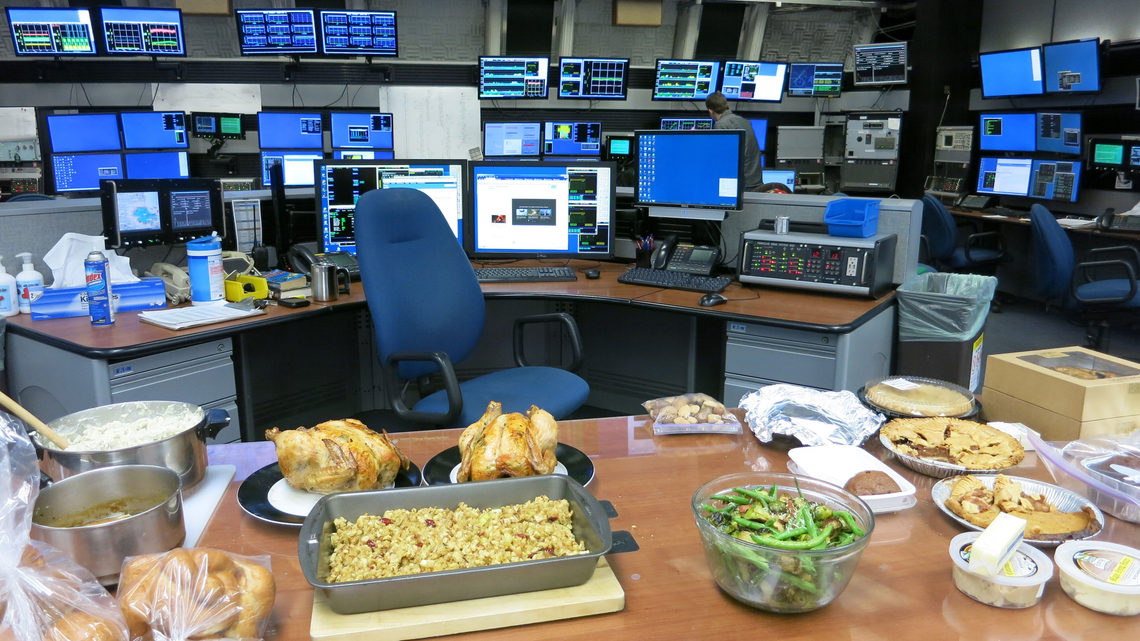 A holiday spread in the Fermilab Main Control Room

In addition to benefiting from the festive atmosphere, hourly employees on shift earn bonus pay, and some experimental physicists earn extra points toward their shift requirements.

“Some of us, operators and experimenters, preferentially work holidays for those reasons,” Joe says, though the reasons to work a shift are many—from helping colleagues get enough time to spend with their families to pure love of the experiments. “Fermilab’s accelerators and experiments both operate continuously right through the holidays, and those of us on shift take it just as seriously as any other time.”

Even though the operator schedule is assigned months in advance, the giving spirit is in the air. A mix of preferences and willingness to trade means most people end up right where they want to be when the holidays roll around.

For some experiments such as the Dark Energy Survey, December offers some of the best observing time of the season, with extremely clear skies. That alone is reason for some scientists to work through the holidays.

Beyond that, “people are excited about using the instrument,” says Doug Tucker, an applications physicist who has spent many a Christmas or New Year’s observing on various telescopes, including the Dark Energy Camera in Chile. “It’s a superb instrument.”

In addition to playing with an excellent scientific toy, observers also earn credit for “infrastructure work,” which can apply toward builder status (a title within the collaboration) and personal data rights (access to information collected on the telescope, even if the observer leaves the collaboration).

There are even more perks. The cooks who work at the cafeteria on the mountain make a feast, with special cakes or watermelons carved into peacocks, and bring their families to celebrate. There are Santa hats and garlands and a fire in the fireplace, despite it being the middle of summer in Chile.

“Instead of digging out your car in Illinois, you can watch sunset with viscachas,” says Sahar Allam, astronomer on DES. Viscachas are fluffy rabbit-like creatures with long tails, and they like to hang out on the mountaintop around sundown. 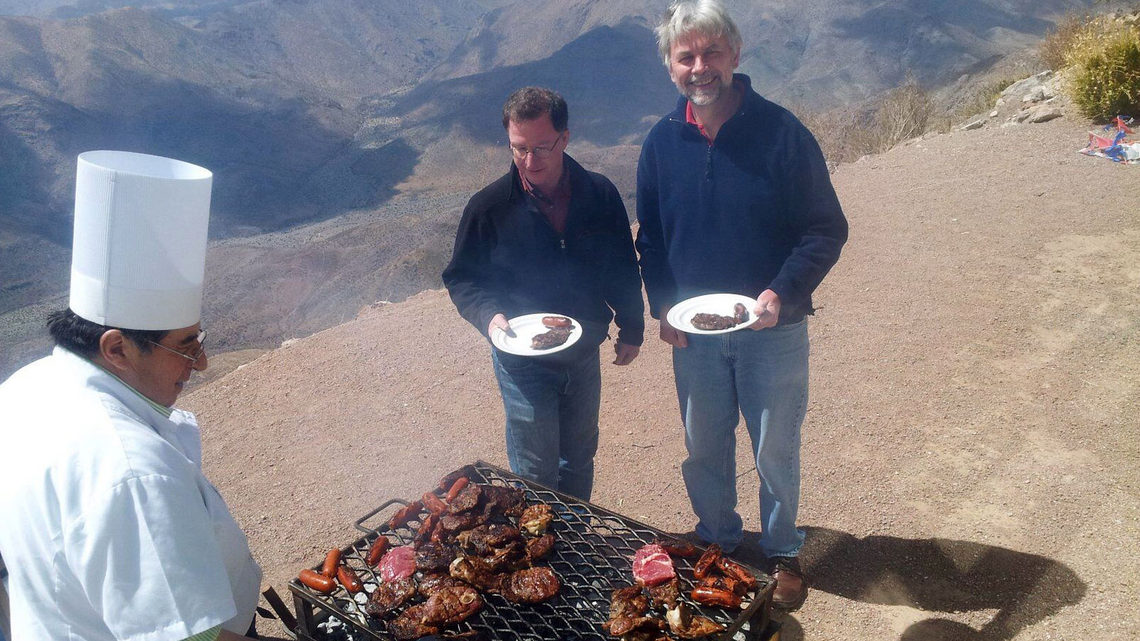 Holiday on the mountaintop

As the new year strikes, sometimes observers will set the camera systems on auto and take a moment to dance and watch fireworks shows in surrounding towns below. One year, the telescope operators turned on the sirens to ring in the new year. With all the food, families and festivities, perhaps celebrating the holidays from a scientific outpost isn’t so bad.

“The fun of being there and having the shift is fun enough,” Allam says. “It’s fun to do what you love.”