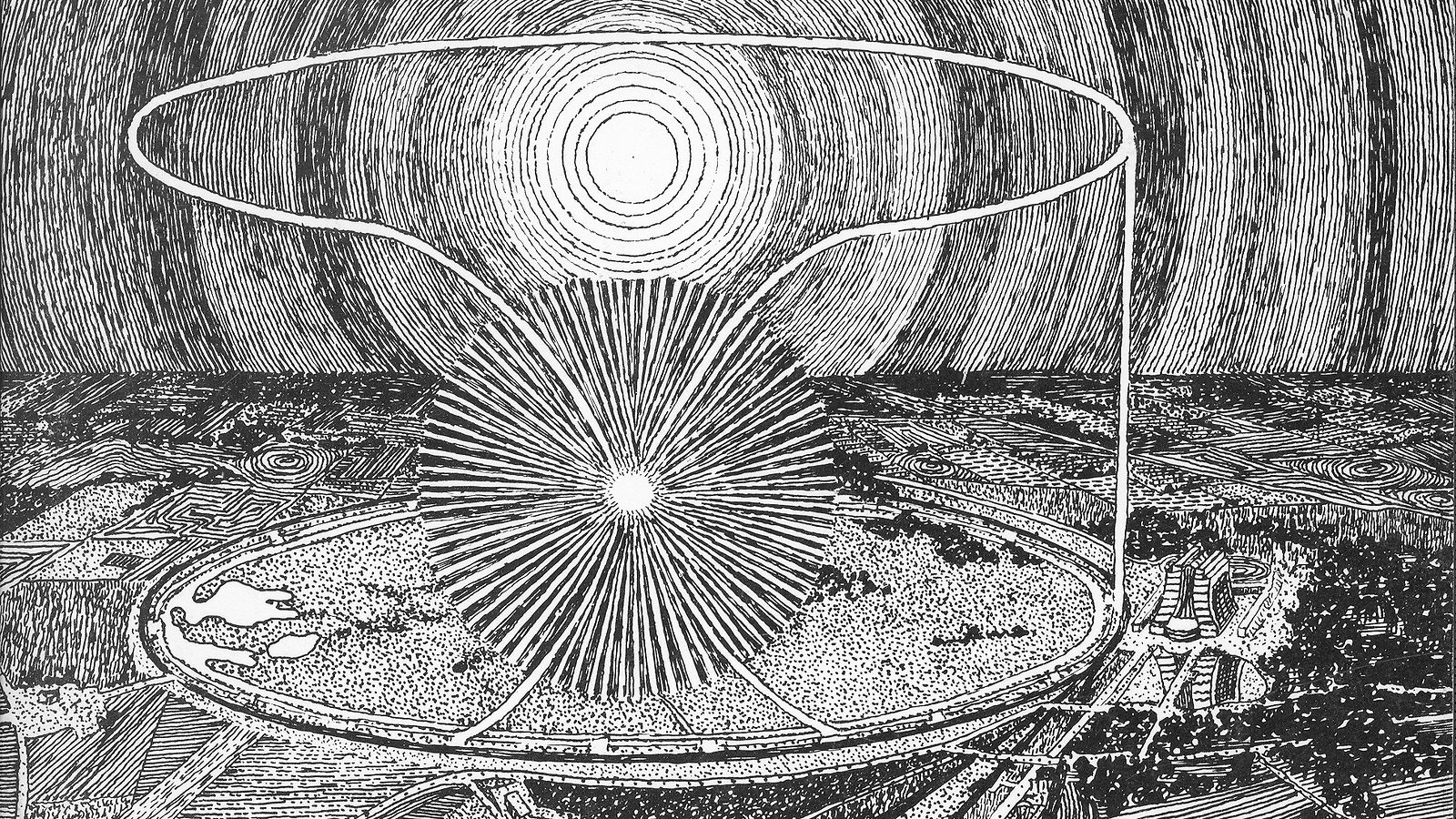 Planning to start up a particle physics lab? Better hire an artist.

That was Robert R. Wilson’s thought in the 1960s, when he began forming what would become the Department of Energy’s Fermi National Accelerator Laboratory. He wanted a space to do physics that would inspire all who set foot on the lab. He knew, even then, the importance of mingling art and science. The 11th person hired was artist Angela Lahs Gonzales, and in her three decades at the lab, she influenced the character and aesthetic of nearly every part of the site.

Gonzales, the daughter of two artists who fled with her from Nazi Germany, had worked with Wilson previously at Cornell University. At Fermilab, she found herself responsible for a multitude of artistic choices. Working closely with Wilson, she created the lab’s logo, a union of dipole and quadrupole magnets used in accelerators to guide and focus the particle beam. She chose a bold color scheme, with vibrant blues, oranges and reds that would coat Fermilab buildings. She designed covers for scientific publications and posters for lab events and lectures.

“There was no project too small or large for Angela,” says Georgia Schwender, the curator of Fermilab’s art gallery. “She seemed to put just as much care and thought into sketches for the Annual Report as she did for a community Easter egg hunt. The whole lab was her canvas and her muse.”

A mix of themes and styles, from history to mythology and op-art to realism, are wrapped around images of accelerators, experiments and the Fermilab site. The images are often bizarre and fantastical, nearly always impressive. In one drawing, Fermilab’s bison dine at an elegant table; in another, winged creatures stare into a bubbling cauldron that contains the Fermilab accelerator complex and main building, Wilson Hall.

Gonzales typically worked in pen, sketching intricate details across paper, but she also branched out into different media, crafting jewelry, flags, vases, tables and even the elevator ceiling tiles. Her reach extended to typography, designs around doorways and drawings of things you might not expect: mundane things like emergency preparedness kits and literal nuts and bolts.

Her word on artistic choices was final. Employees were known to get a talking to if they painted something without consulting Angela. Some colors became tied to the science at hand. One time, an accelerator magnet was painted the wrong shade of blue and thus installed incorrectly, causing some confusion in the control room.

“Gonzales was at the lab from 1967 to 1998, and in that time she was incredibly influential on the style of the lab,” says Valerie Higgins, Fermilab’s archivist. “But you can see how these tendrils of art spiral out to influence the science and the shape of the lab as well.”

More than 100 pieces by Gonzales were featured in a Fermilab art gallery exhibit earlier this year, as the lab celebrated its 50th anniversary. “A Lasting Mark” ran from June to September before briefly traveling and then being retired. An online catalog of the exhibit is available on the Fermilab site. 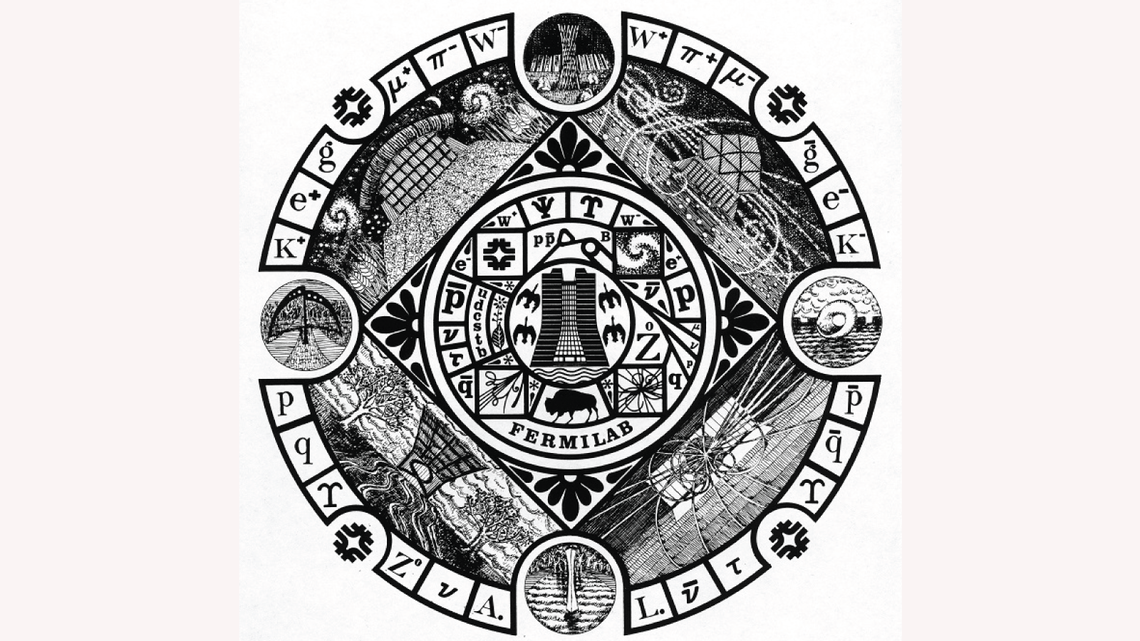 Angela Gonzales incorporated many Fermilab elements into the unofficial Fermilab seal, including Wilson Hall, the logo, particle symbols, and buildings and sculptures from around the site. 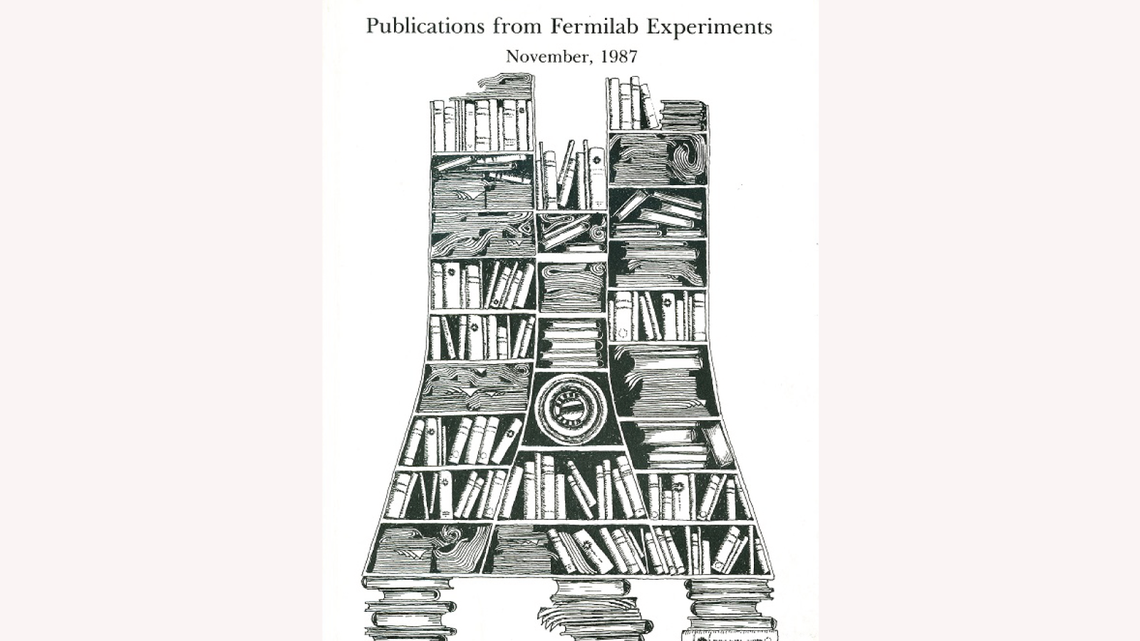 Documents and books fill a Wilson Hall-shaped bookshelf on the cover of Publications from Fermilab Experiments (1987). 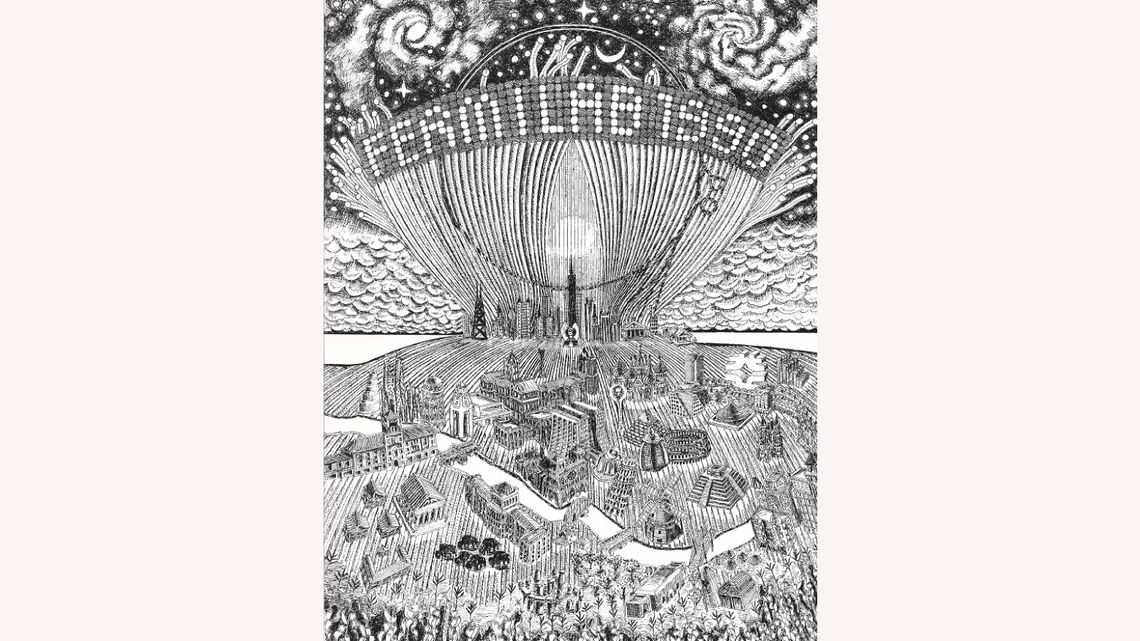 Wilson Hall sits among other famous buildings (such as the Leaning Tower of Pisa and the Great Pyramid of Giza) on the cover of the Fermilab Annual Report (1990). 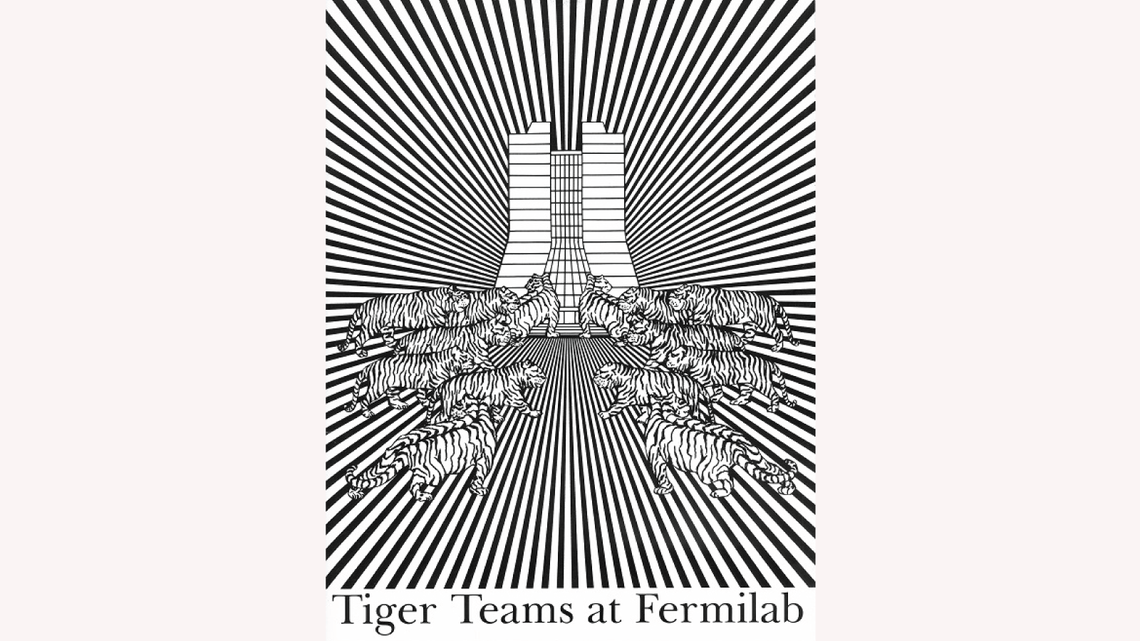 Bold lines unite Wilson Hall and tigers on the cover of the Tiger Teams at Fermilab (1992). 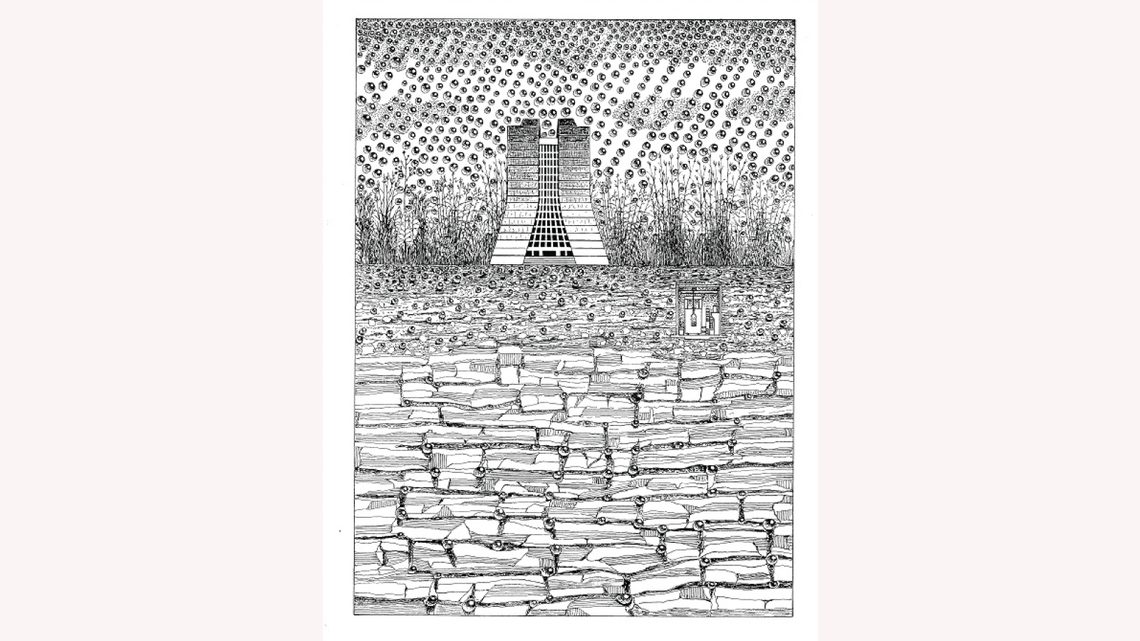 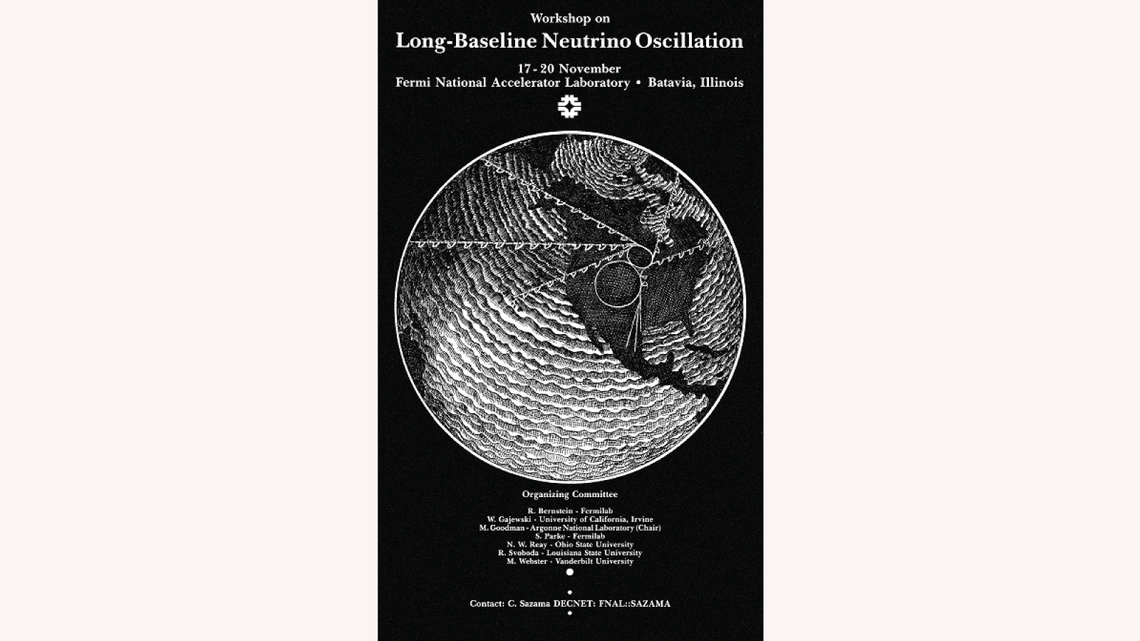 Gonzales designed posters for many events, including colloquia, symposia and workshops. 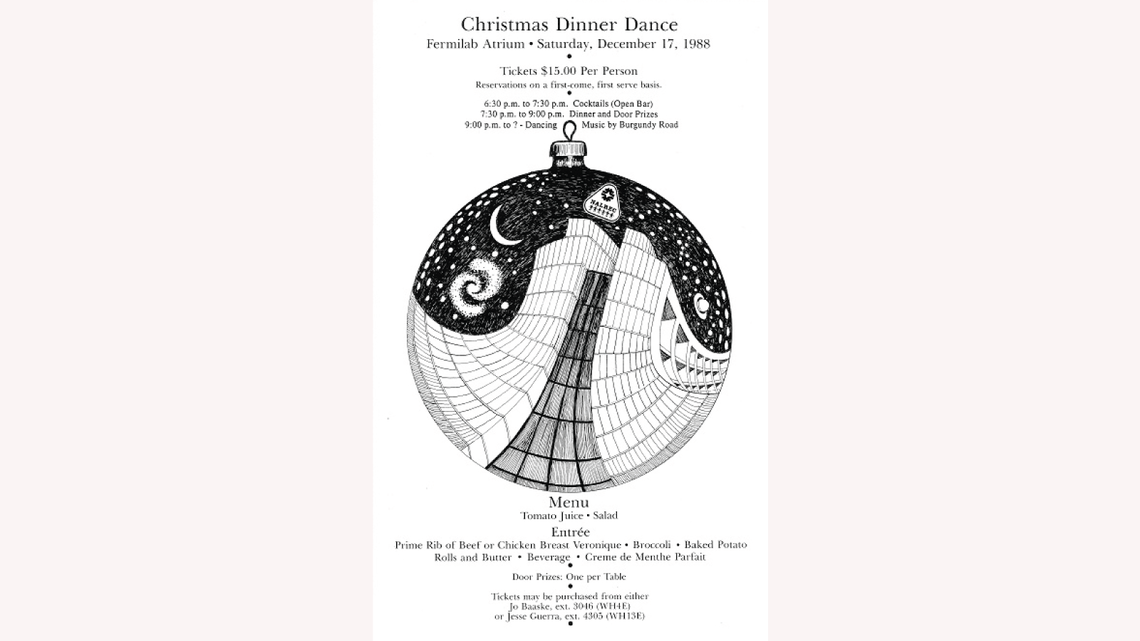 Wilson Hall becomes an ornament on the poster for Fermilab’s Christmas Dinner Dance in 1988. 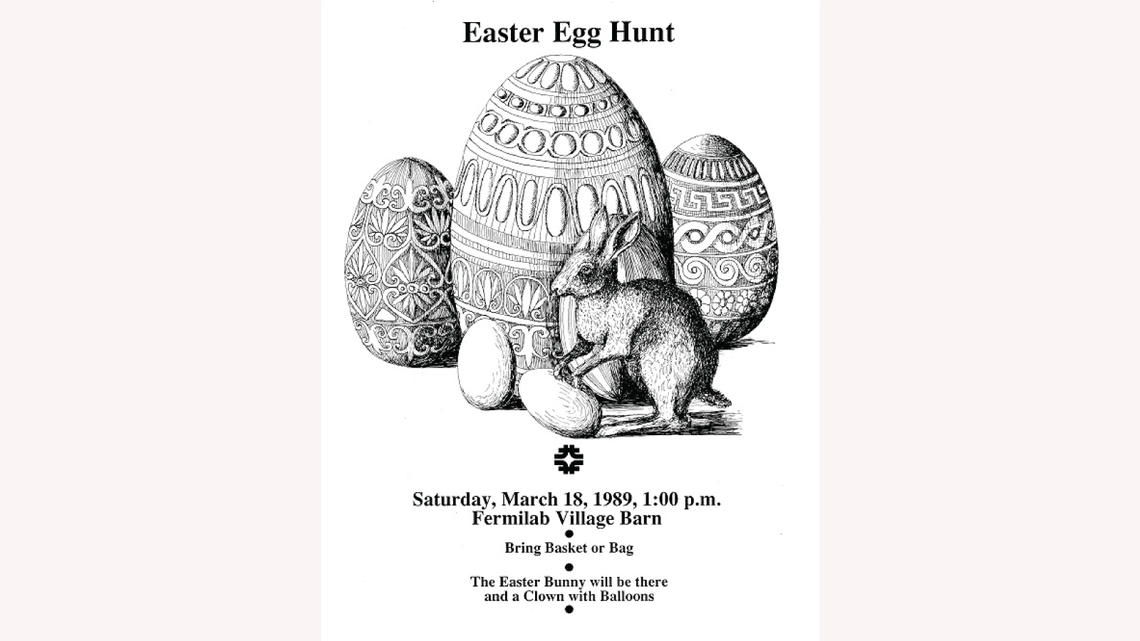 A whimsical rabbit urges families to attend the 1989 Easter egg hunt on the Fermilab site. 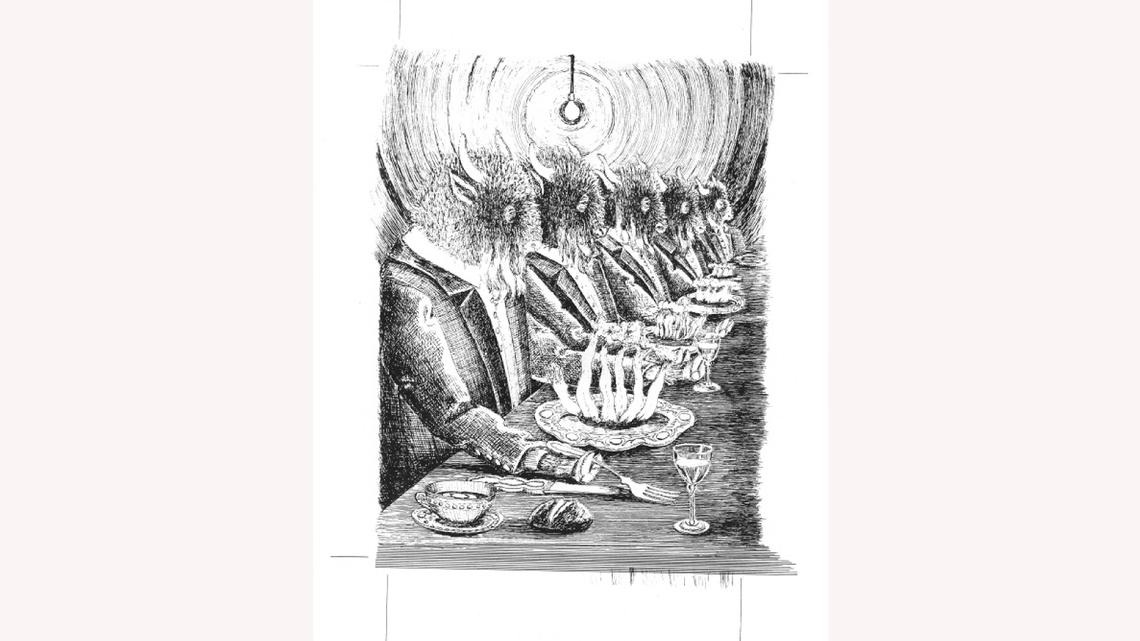 Elegant bison dine at a table in this surreal Gonzales artwork. 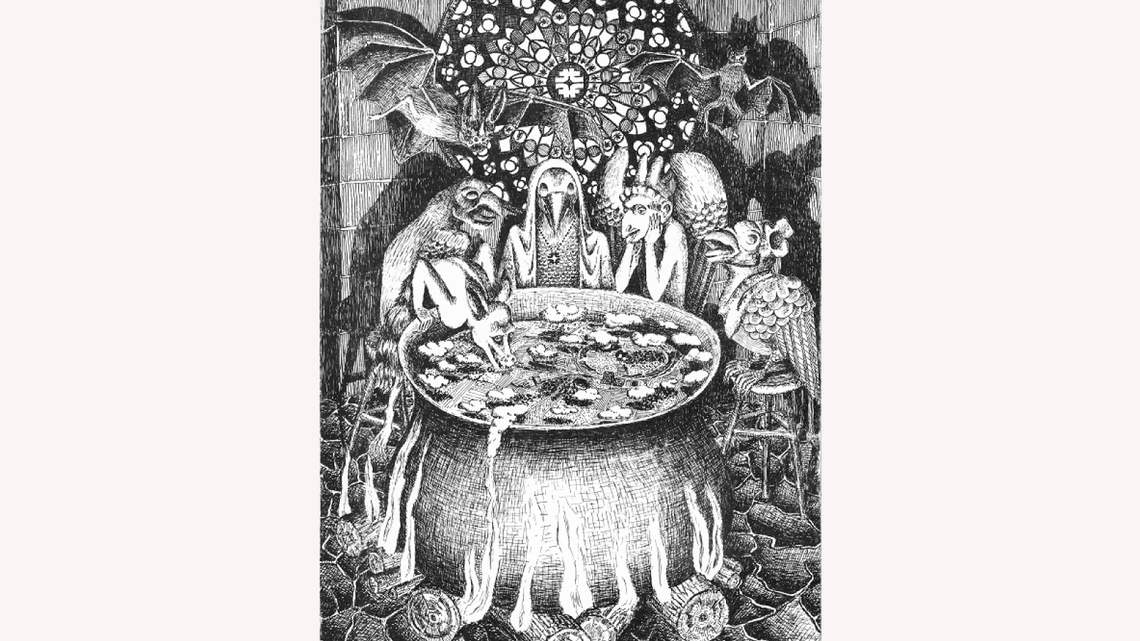 Many of Gonzales’s creations draw on mythology and creatures, as in this cover of the High Energy Particle Interactions in Large Targets. Volume 1: Hadronic Cascades, Shielding, Energy Deposition (1975). 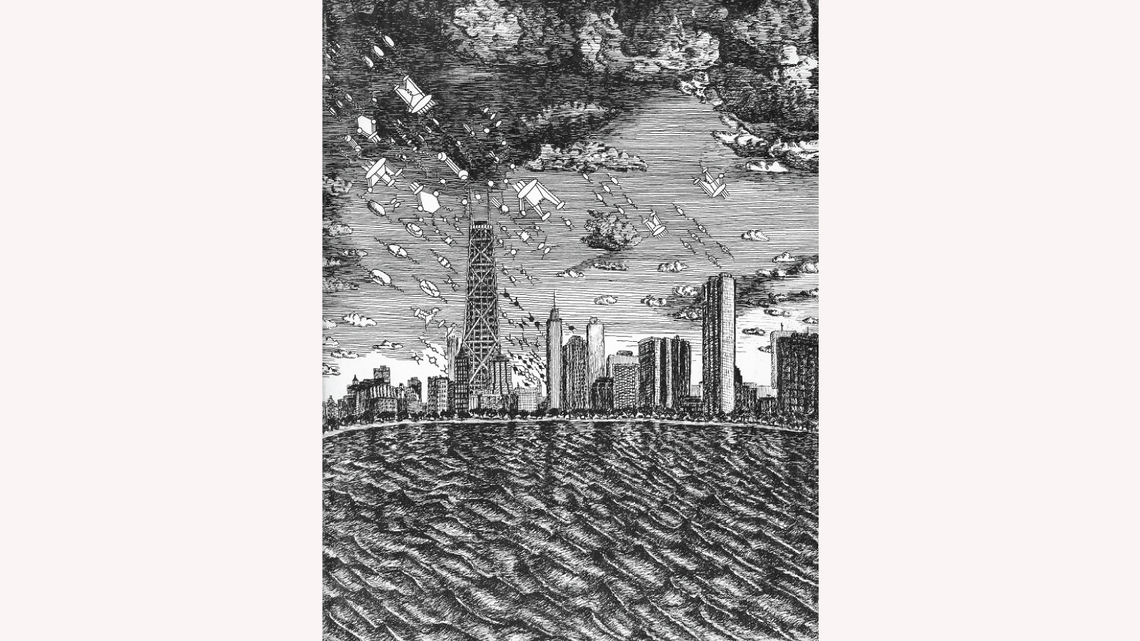 Feynman diagrams rain down on the Chicago skyline in the cover of Proceedings of the XVI International Conference on High Energy Physics (1972). 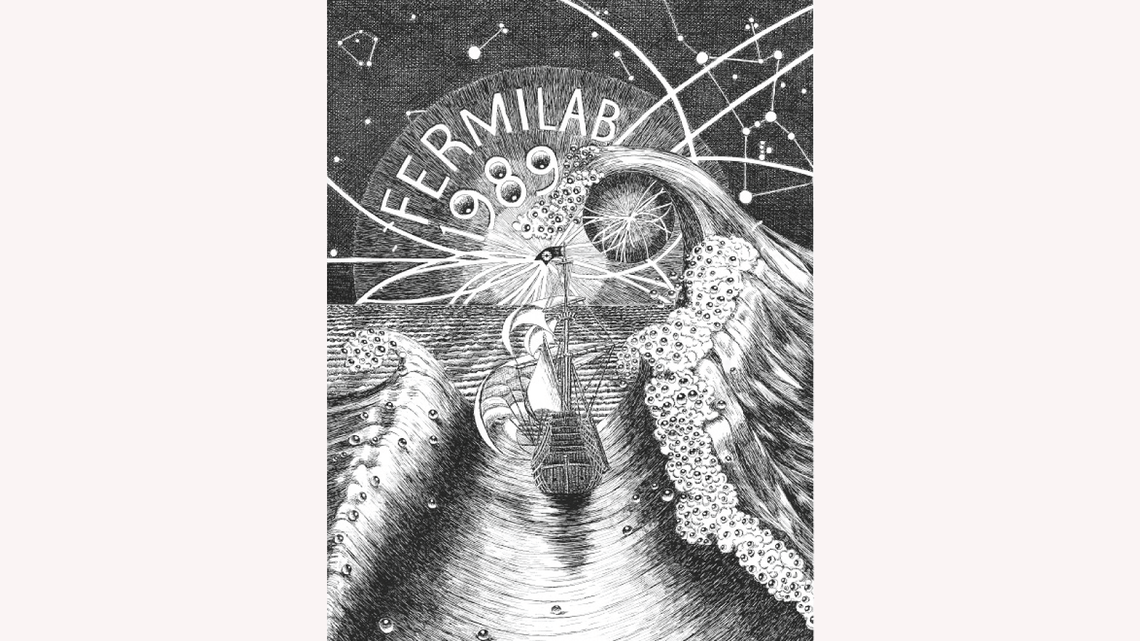 The cover for the Fermilab Annual Report (1989) uses a nautical theme. 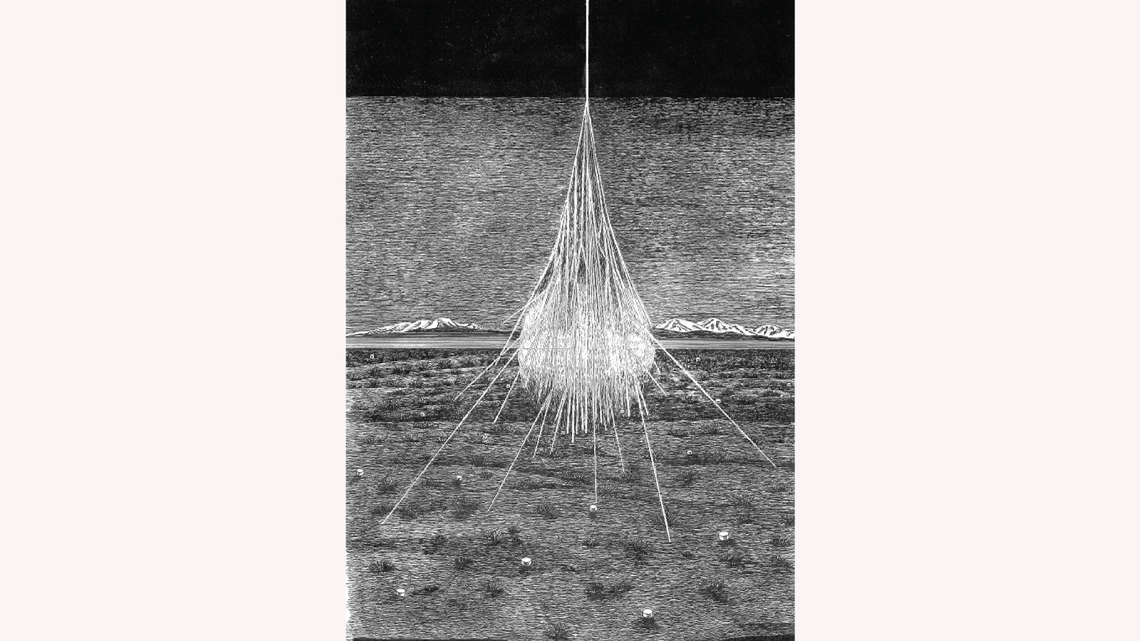 Gonzales created art for complicated physics processes, such as cascading particle showers caused by cosmic rays interacting in the atmosphere. 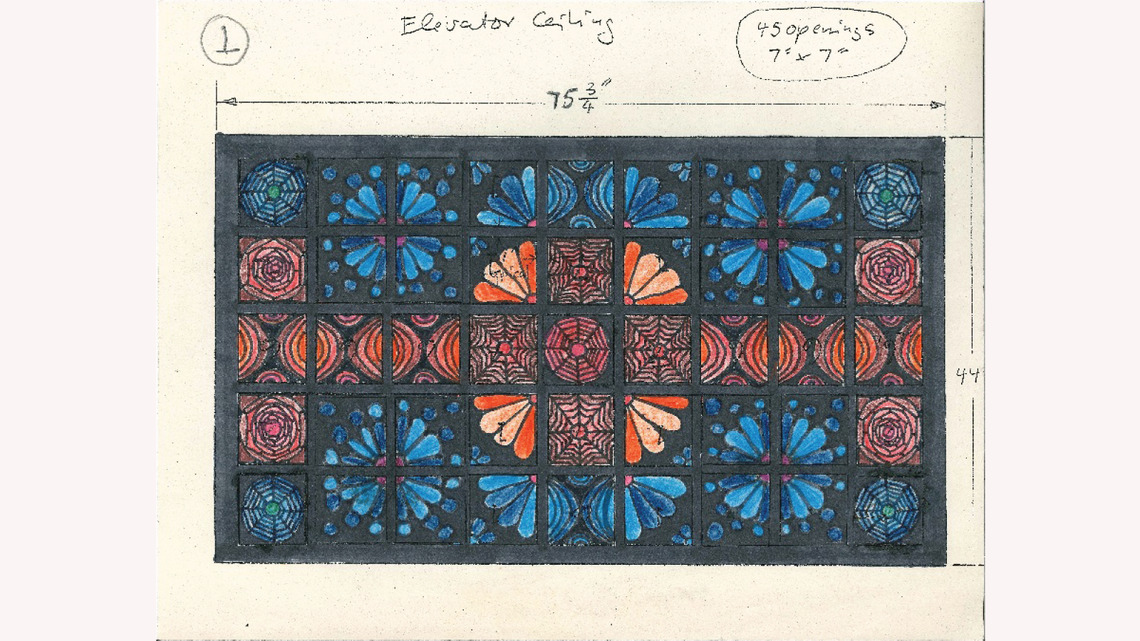 Gonzales’s artwork also touched the physical spaces at the lab. This image shows her design for the elevator ceiling tiles. 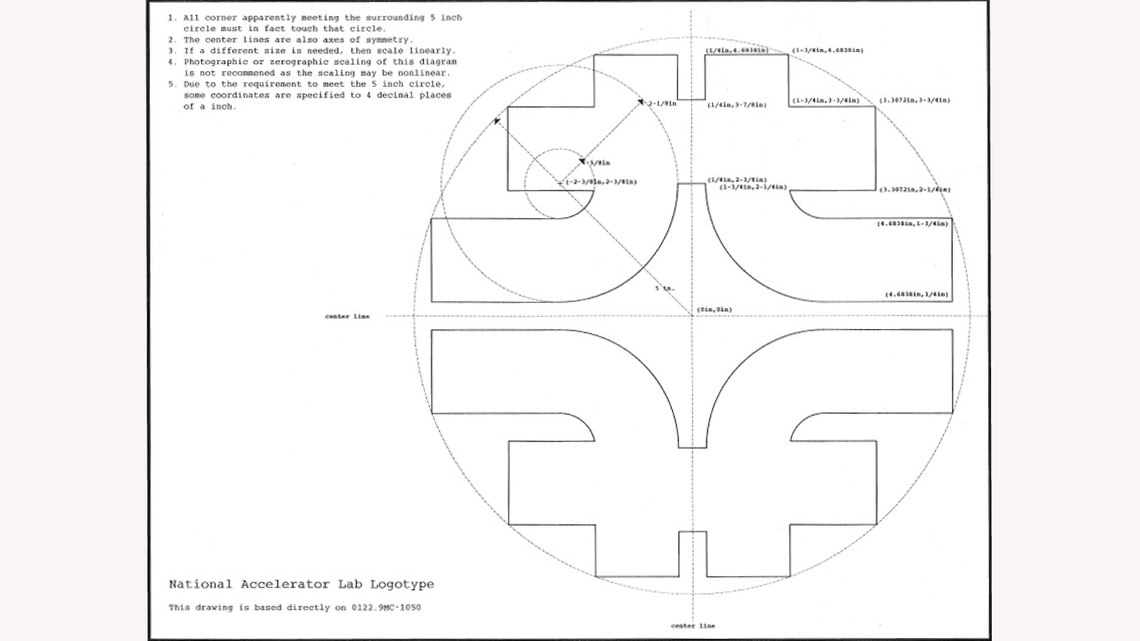 The Fermilab logo was created in a collaboration between Wilson and Gonzales; the final version has rigorous specifications.

Fermilab
Previous Next
Follow
Use your browser’s print dialog box to create a pdf.