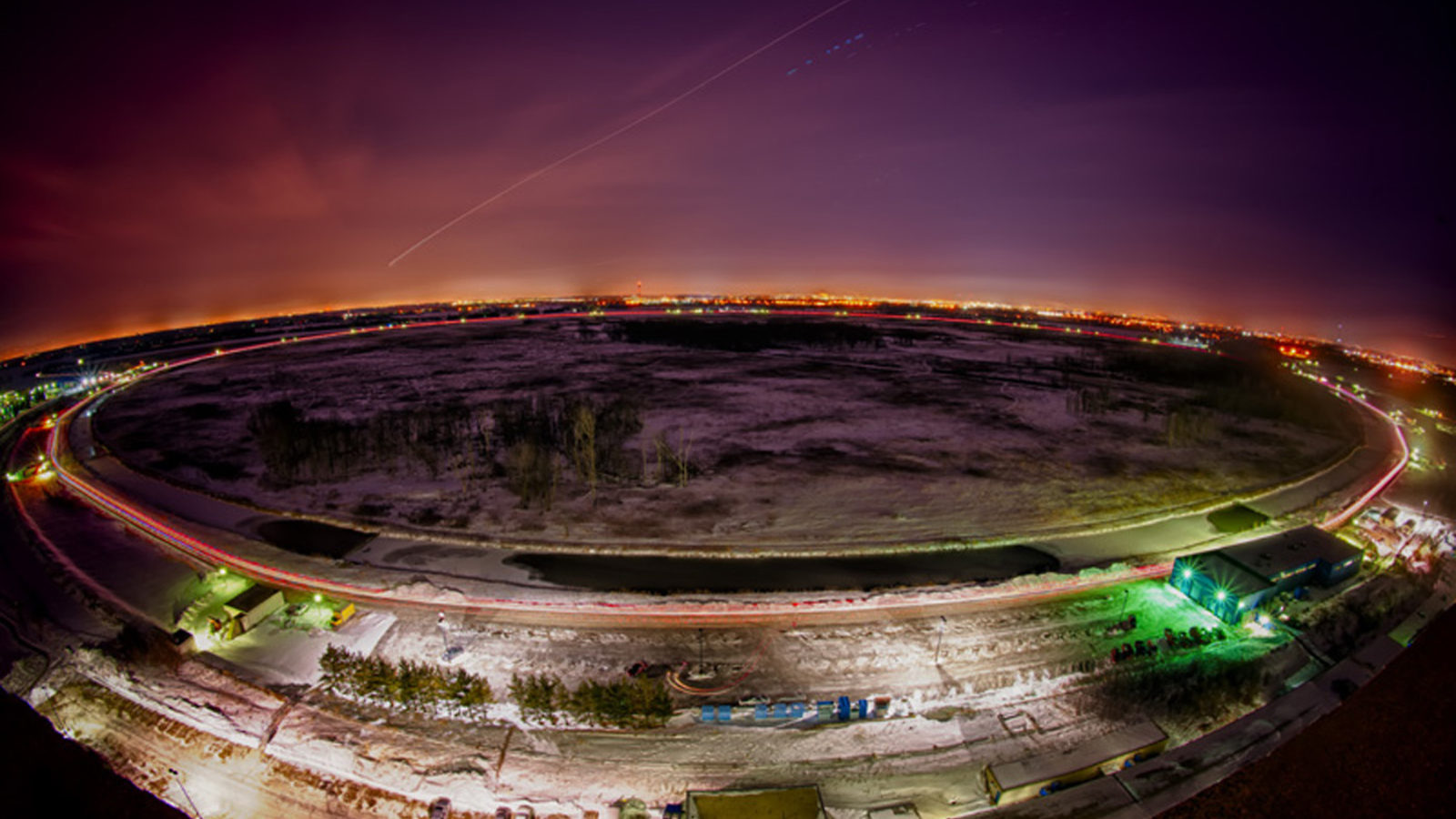 Scientists on the CDF and DZero experiments at Fermi National Accelerator Laboratory have found the final predicted way of creating a top quark, completing a picture of this particle nearly 20 years in the making.

The two collaborations jointly announced on February 21 that they had observed one of the rarest methods of producing the elementary particle—creating a single top quark through the weak nuclear force, in what is called the “s-channel.” For this analysis, scientists from the CDF and DZero collaborations sifted through data from more than 500 trillion proton-antiproton collisions produced by the Tevatron particle accelerator (pictured above) from 2001 to 2011. They identified about 40 particle collisions in which the weak nuclear force produced single top quarks in conjunction with single bottom quarks.

Top quarks are the heaviest and among the most puzzling elementary particles. They weigh even more than the Higgs boson—as much as an atom of gold—and only two machines have ever produced them: Fermilab’s Tevatron and the Large Hadron Collider at CERN. There are several ways to produce them, as predicted by the theoretical framework known as the Standard Model, and the most common one was the first one discovered: a collision in which the strong nuclear force creates a pair consisting of a top quark and its antimatter cousin, the anti-top quark.

Collisions that produce a single top quark through the weak nuclear force are rarer, and the process scientists on the Tevatron experiments have just announced is the most challenging of these to detect. This method of producing single top quarks is among the rarest interactions allowed by the laws of physics. The detection of this process was one of the ultimate goals of the Tevatron, which for 25 years was the most powerful particle collider in the world. 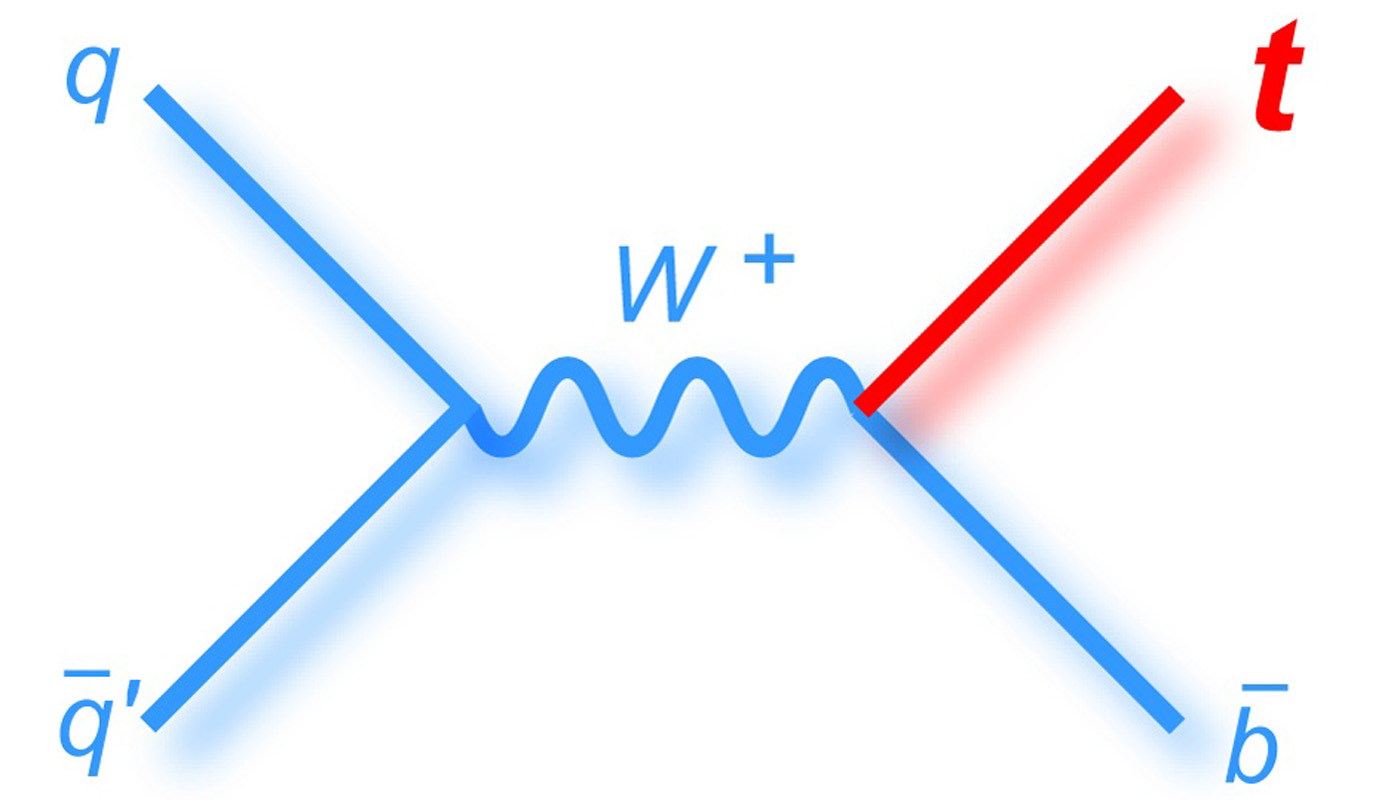 This diagram shows a single top quark being created through the weak force. A quark interacts with an antiquark, forming a W boson, a particle that mediates the weak force. The W boson then decays into a top quark and an antibottom quark, which can be seen in the CDF and DZero detectors.

“This is an important discovery that provides a valuable addition to the picture of the Standard Model universe,” says James Siegrist, US Department of Energy Associate Director of Science for High Energy Physics. “It completes a portrait of one of the fundamental particles of our universe, by showing us one of the rarest ways to create them.”

Searching for single top quarks is like looking for a needle in billions of haystacks. Only one in every 50 billion Tevatron collisions produced a single s-channel top quark, and the CDF and DZero collaborations only selected a small fraction of those to separate them from background, which is why the number of observed occurrences of this particular channel is so small. However, the statistical significance of the CDF and DZero data exceeds that required to claim a discovery.

“Kudos to the CDF and DZero collaborations for their work in discovering this process,” says Saul Gonzalez, program director for the National Science Foundation. “Researchers from around the world, including dozens of universities in the United States, contributed to this important find.”

The CDF and DZero experiments first observed particle collisions that created single top quarks through a different process of the weak nuclear force in 2009. This observation was later confirmed by scientists using the Large Hadron Collider.

Scientists from 27 countries collaborated on the Tevatron CDF and DZero experiments and continue to study the reams of data produced during the collider’s run, using ever more sophisticated techniques and computing methods.

“I’m pleased that the CDF and DZero collaborations have brought their study of the top quark full circle,” says Fermilab Director Nigel Lockyer. “The legacy of the Tevatron is indelible, and this discovery only makes the breadth of that research even more remarkable.”

Fermilab published a version of this article as a press release.
Follow
Use your browser’s print dialog box to create a pdf.
Latest news articles
Berkeley Lab