With a deadly embrace, ‘spidery’ pulsars devour their partners. One such pulsar is the first rapidly spinning black widow to be discovered using only gamma rays. 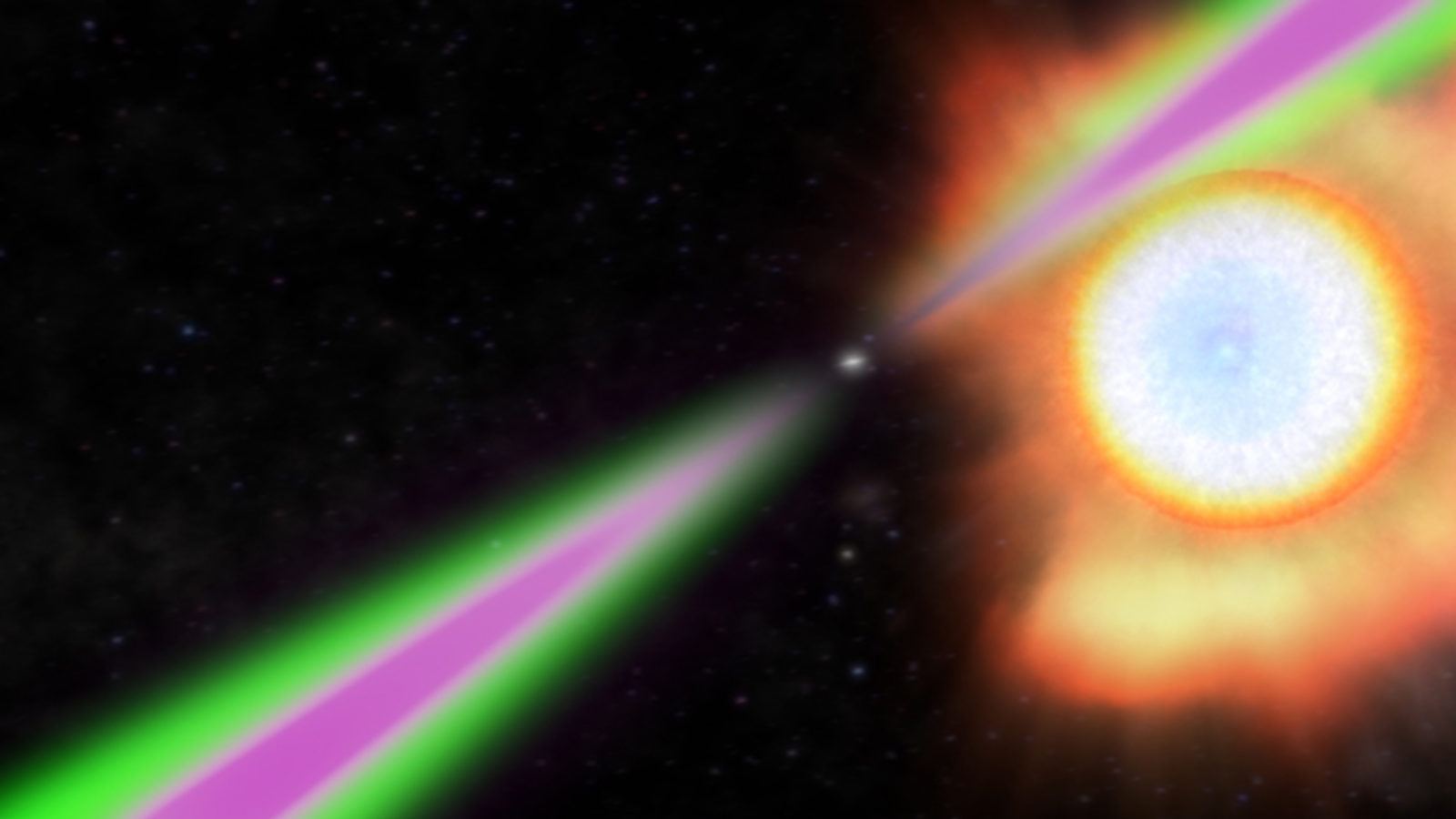 Black widow spiders and their Australian cousins, known as redbacks, are notorious for killing and devouring their partners. Astronomers have noted similar behavior among two rare breeds of binary system that contain rapidly spinning neutron stars, also known as pulsars, and have named them accordingly.

“The essential features of black widow and redback binaries are that they place a normal but very low-mass star in close proximity to a [rapidly spinning] pulsar, which has disastrous consequences for the star,” says Roger Romani, a member of the Kavli Institute for Particle Astrophysics and Cosmology, an institute run jointly by Stanford and SLAC National Accelerator Laboratory.

So far, astronomers have found at least 18 black widows and nine redbacks within the Milky Way, and additional members of each class have been discovered within the dense globular star clusters that orbit our galaxy. The main difference between the two is that black widow systems contain stars that are both physically smaller and of much lower mass than those found in redbacks.

When a massive star explodes as a supernova, the crushed core it leaves behind—a neutron star—squeezes more mass than the sun into a ball no larger than Washington, DC.

Young, an isolated neutron stars rotate a few thousand times per minute and emit beams of radio, visible light, X-rays and gamma rays. They also generate powerful outflows, or “winds,” of high-energy particles. The power for all this derives from the neutron star’s rapidly spinning magnetic field. Over time, as solitary pulsars wind down, their emissions fade.

Thirty-two years ago, astronomers discovered a new, much faster class of pulsars.  These neutron stars spin at astonishing speeds, up to 43,000 revolutions per minute. Today, more than 300 of these so-called millisecond pulsars have been cataloged.

While young pulsars usually appear in isolation, more than half of millisecond pulsars have a stellar partner, suggesting that interactions with a normal star can make neutron stars spin faster. But how did isolated millisecond pulsars get their kick?

Enter black widows and their kin.

“The high-energy emission and wind from the pulsar basically heats and blows off the normal star’s material and, over millions to billions of years, can eat away the entire star,” says Alice Harding, an astrophysicist at NASA’s Goddard Space Flight Center in Greenbelt, Maryland. “These systems can completely consume their companion stars, and that’s how we think solitary millisecond pulsars form.”

For astronomers, an exciting aspect of the black widow and redback systems is the opportunity to observe how the stellar companion intercepts energy from the pulsar. In effect, the star serves as a vanity mirror, showing the pulsar’s emissions in tremendous detail.

The Fermi Gamma-ray Space Telescope, which orbits the Earth, excels at locating millisecond pulsars, with more than four dozen found to date. Pulsars stand out to Fermi as prominent gamma-ray sources, but searching for their pulsations in Fermi data is extraordinarily difficult without knowing more about the system. Follow-up surveys with radio telescopes are usually the first to pick up actual pulses, providing confirmation that the object is indeed a pulsar. By narrowing down the timing and other parameters, radio studies also enable Fermi scientists to also tease out the gamma-ray pulses from Fermi data.

When Romani began investigating a source of pulses found by Fermi now known as PSR J1311-3430 (J1311, for short), he imaged the system in visible light. This revealed a faint star that changed color from an intense blue to a dull red—hot and cold, for stars—every hour and a half. Romani conjectured that the star was orbiting and being dramatically heated by a compact object, most likely a pulsar, and suggested that the system was a new black widow.

His measurements indicate that the side of the star facing the pulsar is heated to more than 21,000 degrees Fahrenheit, more than twice as hot as the sun’s surface. The cool red side reveals the true color of the pipsqueak star, glowing at a temperature of 5000 Fahrenheit or lower. From these temperatures, the scientists estimate that the companion is between 12 and 17 times the mass of Jupiter.

Holger Pletsch at the Albert Einstein Institute in Hannover, Germany, led an international team on an effort to comb through four years of Fermi LAT data in a search for gamma-ray pulses from J1311. The orbital information established by Romani’s work significantly narrowed the search, but the unknown pulsar parameters still left 100 million billion combinations to explore. Nevertheless, armed with a new, more efficient method, they detected a millisecond pulsar that rotates 390 times a second—more than 23,000 rpm.

J1311 is the first millisecond pulsar ever detected using only gamma rays.

J1311 and other black widow and redback binaries offer unique natural laboratories for studying pulsars up close through the disastrous effects on their partners, which are distorted by the neutron star’s tidal pull, inflamed by its gamma rays, pummeled with particles accelerated to near the speed of light, and ultimately evaporated in a breakup of cosmic proportions.

Of the hundreds of objects in the universe emitting gamma rays, two look to be "black widows," ancient stars extending their lives by sucking in material from companion stars.