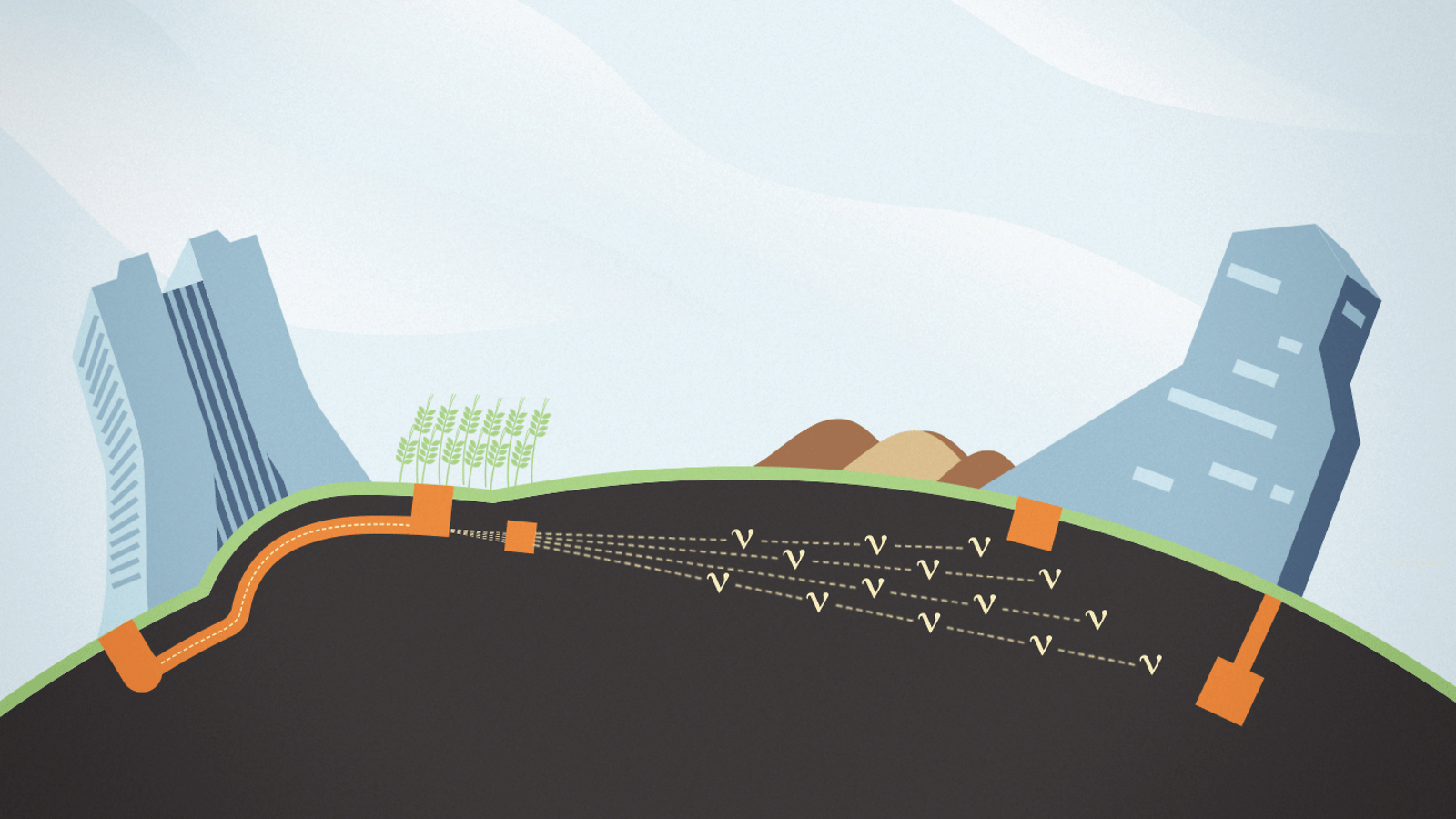 The US Department of Energy has approved the conceptual design of a new experiment that will be a major test of our current understanding of neutrinos and their mysterious role in the universe. Scientists are now proceeding with the engineering design of the Long-Baseline Neutrino Experiment, which aims to discover whether neutrinos violate the fundamental matter–antimatter symmetry of physics. If they do, physicists will be a step closer to answering the puzzling question of why the universe is filled with matter while antimatter all but disappeared after the big bang.

So far, quarks are the only known particles that violate this fundamental symmetry. But the observed effect in quark interactions is not of the right kind to explain the abundance of matter over antimatter in our universe.

Scientists know that neutrino interactions also could violate matter–antimatter symmetry. If so, how strong is the effect? Scientists designed the LBNE experiment to discover the answer. They plan to break ground in 2015.

From around the world

The LBNE experiment will send beams of neutrinos and antineutrinos from the Department of Energy’s Fermilab, 40 miles west of Chicago, to the Sanford Lab in the Black Hills of South Dakota. More than 350 scientists and engineers from more than 60 institutions have joined the LBNE collaboration so far. They come from universities and national laboratories in the United States, India, Italy, Japan and the United Kingdom. The collaboration continues to grow, and project leaders seek and anticipate further international participation.

Start on the prairie

Surrounded by 1000 acres of tallgrass prairie, the accelerators at the Fermi National Accelerator Laboratory in Batavia, Illinois, will produce beams of muon neutrinos and antineutrinos for LBNE. Every 1.3 seconds, an accelerator will smash a batch of protons into a graphite target to make short-lived pions. Strong magnetic fields will guide and focus the pions to form a beam that points toward the LBNE detector in South Dakota. The pions will travel a few hundred feet, decay and produce muon neutrinos and antineutrinos. 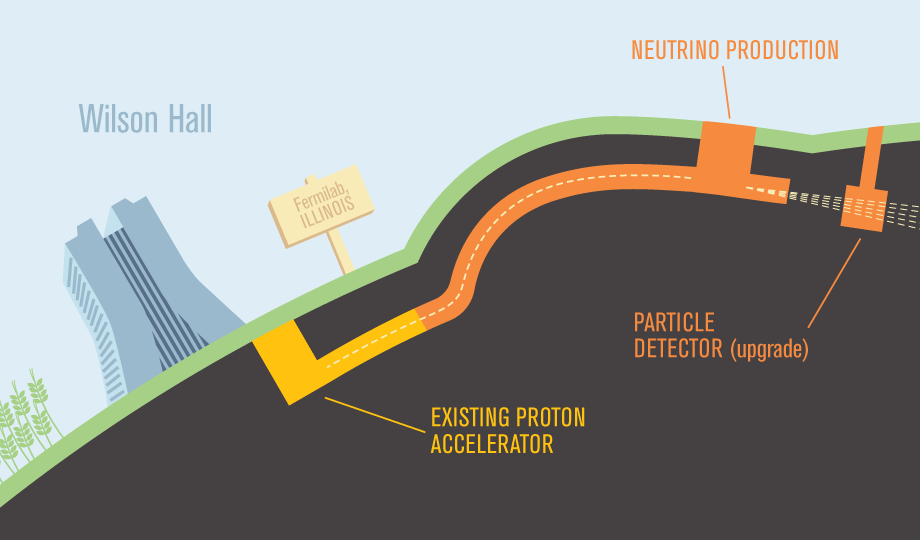 Neutrinos can travel long distances through rock and other matter without a scratch. The LBNE neutrino beam will travel 800 miles straight through the earth from Batavia, Illinois, to the Sanford Lab in Lead, South Dakota—no tunnel necessary. The trip will take less than one-hundredth of a second, enough time for some of the muon neutrinos to transform into electron neutrinos and tau neutrinos. Scientists call this process neutrino oscillation.

A scientific gold mine

A large particle detector to be built at the Sanford Lab will receive the neutrino and antineutrino beams. The lab is located at the former Homestake gold mine, the site of the Nobel Prize-winning Ray Davis solar neutrino experiment. The lab hosts several physics, biology, geology and engineering experiments, including investigations of neutrinos and dark matter. LBNE will be its largest experiment. 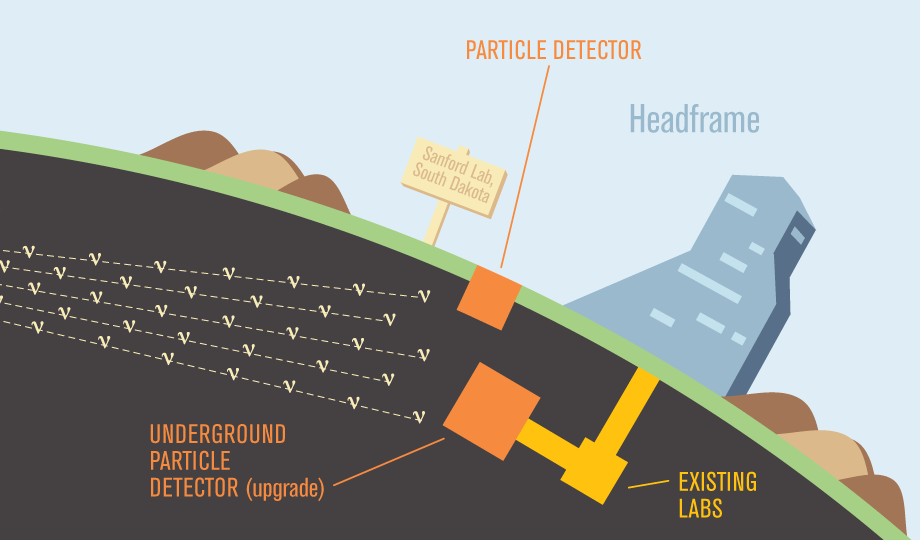 The LBNE detector at Sanford Lab will use more than 10,000 tons of liquid argon to catch the neutrinos. Huge refrigeration chambers, similar to those used on ships that transport liquid gas, will keep the argon at minus 303 degrees Fahrenheit (minus 186 degrees Celsius). Sensors will record the rare interactions between neutrinos and the nuclei of argon atoms, unveiling the neutrinos’ properties. Then scientists will examine the antineutrinos’ properties and compare the results. It might take a decade to collect enough data to discover a matter–antimatter asymmetry.

LBNE scientists plan to upgrade their ambitious experiment when additional resources become available, possibly from international collaborators. At Fermilab, they would add an underground hall with a particle detector that would measure the exact number of muon neutrinos produced. At the Sanford Lab, they would construct a large particle detector thousands of feet underground, still within the cone of the neutrino beam from Fermilab. Better shielded from cosmic rays than the planned detector at the surface, this detector would be more sensitive to symmetry-violating neutrino interactions. It also could look for neutrinos from supernovae and for the predicted but never observed decay of protons. With support from their collaborators, the LBNE project team hopes to implement these upgrades as soon as possible.