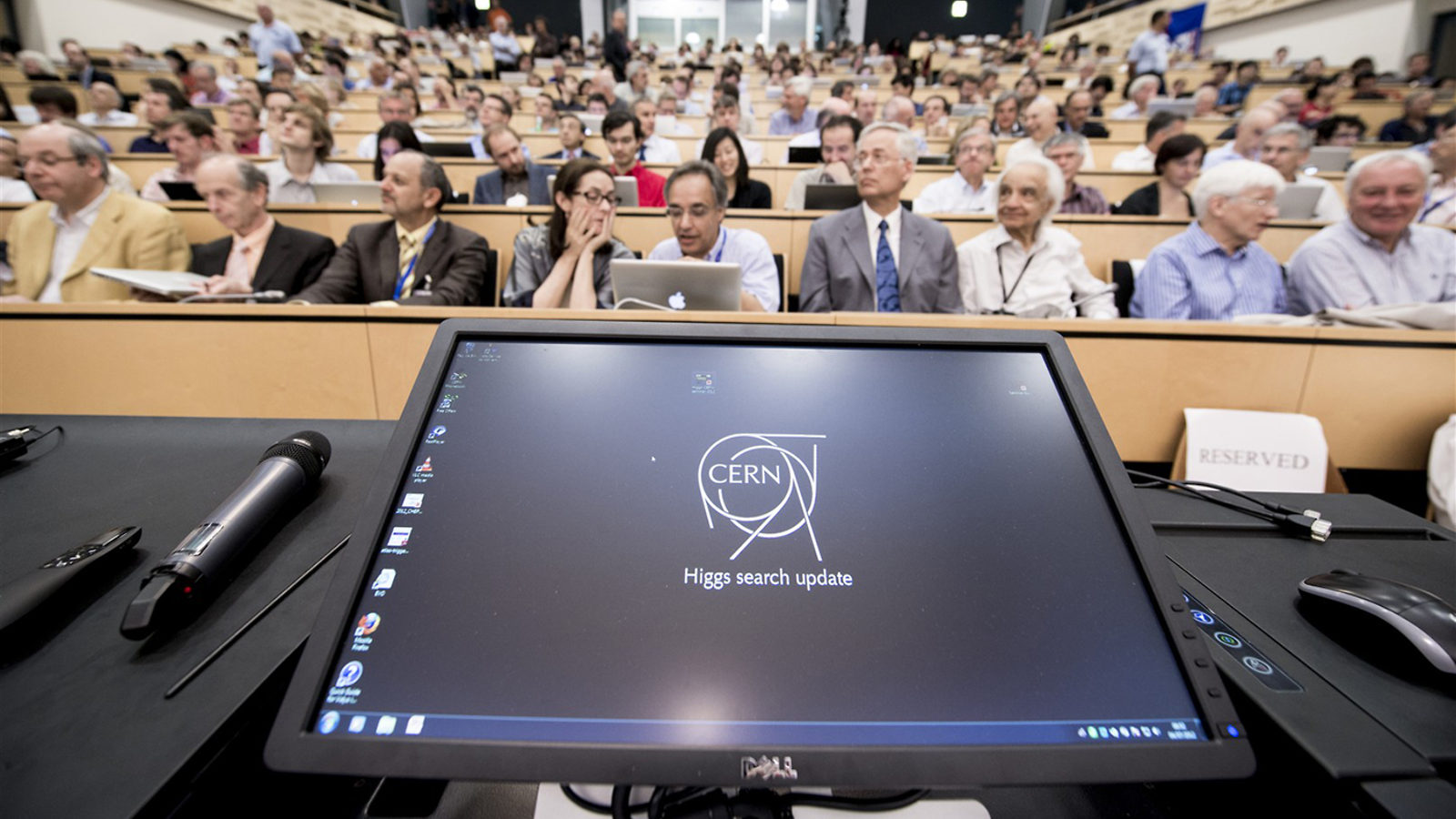 In June 2012, particle physicists on experiments at the Large Hadron Collider had a secret to keep, just between themselves and a few thousand colleagues. Scientists on the ATLAS and CMS experiments at the European laboratory CERN had both seen signs of a possible Higgs boson rise above the significance level customarily required to declare a new particle discovery. The Higgs boson, an excitation of the field thought to give mass to other subatomic particles, was the last missing piece of the Standard Model of particle physics.

Outcomes from different searches had begun to line up, and even the most obstinate skeptics had begun to agree: This was looking more and more like the particle scientists had been pursuing since theorists first predicted it in 1964.

It had been a difficult search, one that became a focal point of programs at the Large Electron Positron collider at CERN and later at the Tevatron collider at Fermilab. The two largest experiments at the LHC tentatively planned to release their results the first week of July—in two individual presentations. Scientists designed the CMS and ATLAS detectors in part to verify one another’s conclusions. To keep the experiments independent, the scientists needed to keep their data to themselves.

In late June, each of the two collaborations held an historic, internal meeting in which it announced—for its members’ ears only—Higgs search results that came close to the traditional threshold for a discovery. 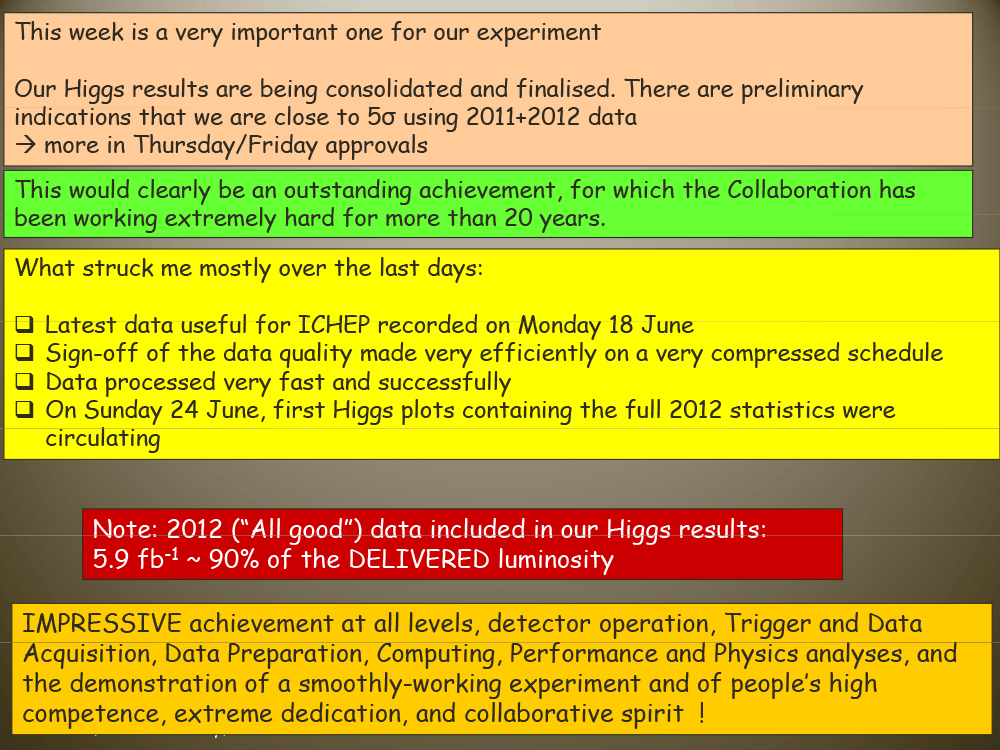 As ATLAS Spokesperson Fabiola Gianotti for the first time presented the slide shown above, with its exhilarating news, to the entire ATLAS collaboration, she joked that they should be sure not to show happy faces to the CMS collaboration. 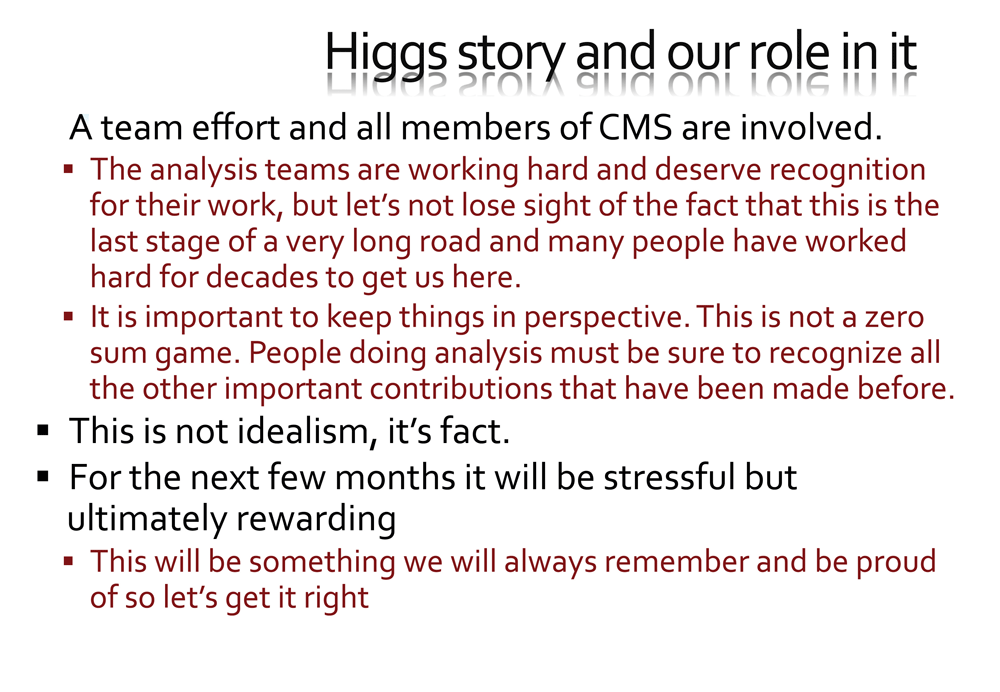 CMS Spokesperson Joe Incandela presented the slide shown above during the week that the CMS Higgs search results were shared with the full collaboration. In the days that followed, Incandela sent a purposefully vague email to a private CMS listserv saying little more than “It has been tentatively agreed that we will show approved results in a seminar at CERN. More details will follow soon.”

Of course, ATLAS and CMS physicists interact too often for the results to have stayed strictly confidential in the final days before the big reveal. But it was still an electric moment when, after both experiments presented similar conclusions in their search for the Higgs, CERN Director-General Rolf Heuer declared: “I think we have it.”