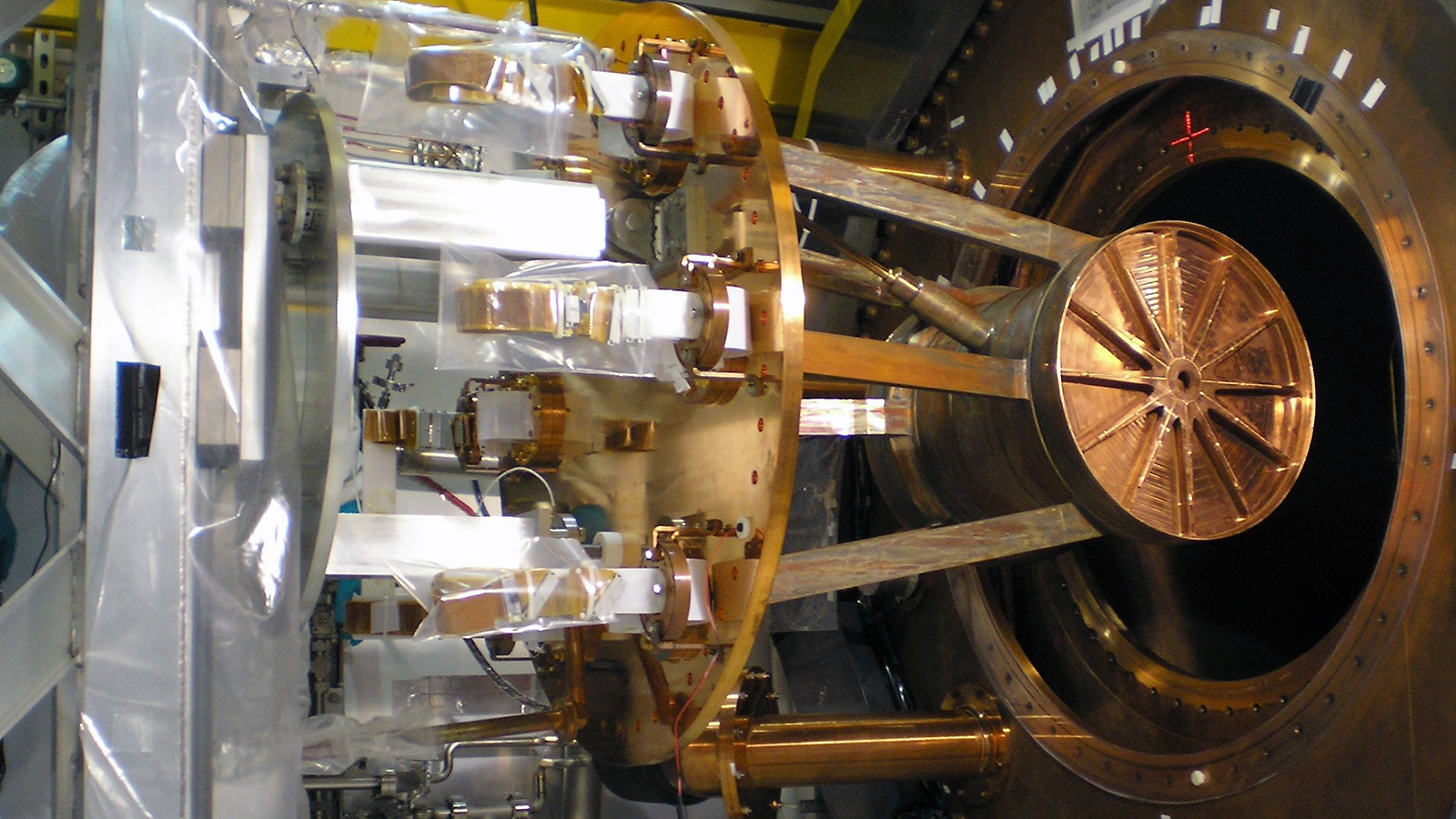 Science is often about serendipity: being open to new results, looking for the unexpected.

The dark side of serendipity is sheer bad luck, which is what put the Enriched Xenon Observatory experiment, or EXO-200, on hiatus for almost two years.

Accidents at the Department of Energy’s underground Waste Isolation Pilot Project (WIPP) facility near Carlsbad, New Mexico, kept researchers from continuing their search for signs of neutrinos and their antimatter pairs. Designed as storage for nuclear waste, the site had both a fire and a release of radiation in early 2014 in a distant part of the facility from where the experiment is housed. No one at the site was injured. Nonetheless, the accidents, and the subsequent efforts of repair and remediation, resulted in a nearly two-year suspension of the EXO-200 effort.

Things are looking up now, though: Repairs to the affected area of the site are complete, new safety measures are in place, and scientists are back at work in their separate area of the site, where the experiment is once again collecting data. That’s good news, since EXO-200 is one of a handful of projects looking to answer a fundamental question in particle physics: Are neutrinos and antineutrinos the same thing?

The neutrino that wasn't there

Each type of particle has its own nemesis: its antimatter partner. Electrons have positrons—which have the same mass but opposite electric charge—quarks have antiquarks and protons have antiprotons. When a particle meets its antimatter version, the result is often mutual annihilation. Neutrinos may also have antimatter counterparts, known as antineutrinos. However, unlike electrons and quarks, neutrinos are electrically neutral, so antineutrinos look a lot like neutrinos in many circumstances.

In fact, one hypothesis is that they are one and the same. To test this, EXO-200 uses 110 kilograms of liquid xenon (of its 200kg total) as both a particle source and particle detector. The experiment hinges on a process called double beta decay, in which an isotope of xenon has two simultaneous decays, spitting out two electrons and two antineutrinos. (“Beta particle” is a nuclear physics term for electrons and positrons.)

“Neutrinoless double beta decay is kind of a nuclear physics trick to answer a particle physics problem,” says Michelle Dolinski, one of the spokespeople for EXO-200 and a physicist at Drexel University. It’s not an easy experiment to do.

EXO-200 and similar experiments look for indirect signs of neutrinoless double beta decay. Most of the xenon atoms in EXO-200 are a special isotope containing 82 neutrons, four more than the most common version found in nature. The isotope decays by emitting two electrons, changing the atom from xenon into barium. Detectors in the EXO-200 experiment collect the electrons and measure the light produced when the beta particles are stopped in the xenon. These measurements together are what determine whether double beta decay happened, and whether the decay was likely to be neutrinoless.

EXO-200 isn’t the only neutrinoless double beta decay experiment, but many of the others use solid detectors instead of liquid xenon. Dolinski got her start on the CUORE experiment, a large solid-state detector, but later changed directions in her research.

“I joined EXO-200 as a postdoc in 2008 because I thought that the large liquid detectors were a more scalable solution,” she says. "If you want a more sensitive liquid-state experiment, you can build a bigger tank and fill it with more xenon.”

Neutrinoless or not, double beta decay is very rare. A given xenon atom decays randomly, with an average lifetime of a quadrillion times the age of the universe. However, if you use a sufficient number of atoms, a few of them will decay while your experiment is running.

“We need to sample enough nuclei so that you would detect these putative decays before the researcher retires,” says Martin Breidenbach, one of the EXO-200 project leaders and a physicist at the Department of Energy’s SLAC National Accelerator Laboratory.

But the experiment is not just detecting neutrinoless events. Heavier neutrinos mean more frequent decays, so measuring the rate reveals the neutrino mass — something very hard to measure otherwise.

Prior runs of EXO-200 and other experiments failed to see neutrinoless double beta decay, so either neutrinos and antineutrinos aren’t the same particle after all, or the neutrino mass is small enough to make decays too rare to be seen during the experiment’s lifetime. The current limit for the neutrino mass is less than 0.38 electronvolts—for comparison, electrons are about 500,000 electronvolts in mass. 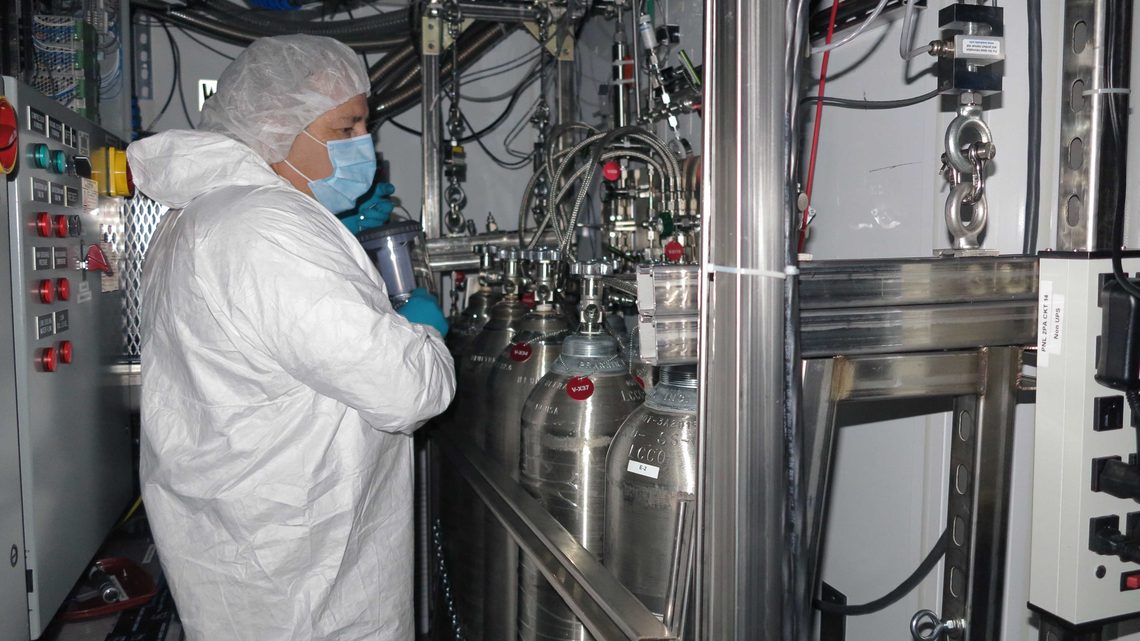 Working in the salt mines

Cindy Lin is a Drexel University graduate student who spends part of her time working on the EXO-200 detector at the mine. Getting to work is fairly involved.

“In the morning we take the cage elevator half a mile down to the mine,” she says. Additionally, she and the other workers at WIPP have to take a 40-hour safety training to ensure their wellbeing, and wear protective gear in addition to normal lab clothes.

“As part of the effort to minimize salt dust particles in our cleanroom, EXO-200 scientists also cover our hair and wear coveralls,” Lin adds.

The sheer amount of earth over the detector shields it from electrons and other charged particles from space, which would make it too hard to spot the signal from double beta decay. WIPP is carved out of a sodium chloride deposit—the same stuff as table salt—that has very little uranium or the other radioactive minerals you find in solid rock caverns. But it has its drawbacks, too.

“Salt is very dynamic: It moves at the level of centimeters a year, so you can't build a nice concrete structure,” says Breidenbach. To compensate, the EXO-200 team has opted for a more modular design.

The inadvertent shutdown provided extra challenges. EXO-200, like most experiments, isn’t well suited for being neglected for more than a few days at a time. However, Lin and other researchers worked hard to get the equipment running for new data this year, and the downtime also allowed researchers to install some upgraded equipment.

The next phase of the experiment, nEXO, is at a conceptual stage based on what has been learned from EXO200. Experimenters are considering the benefits of moving the project deeper underground, perhaps at a facility like the Sudbury Neutrino Observatory (SNOlab) in Canada. Dolinski is optimistic that if there are any neutrinoless double beta decays to see, nEXO or similar experiments should see them in the next 15 years or so.

Then, maybe we’ll know if neutrinos and antineutrinos are the same and find out more about these weird low-mass particles.