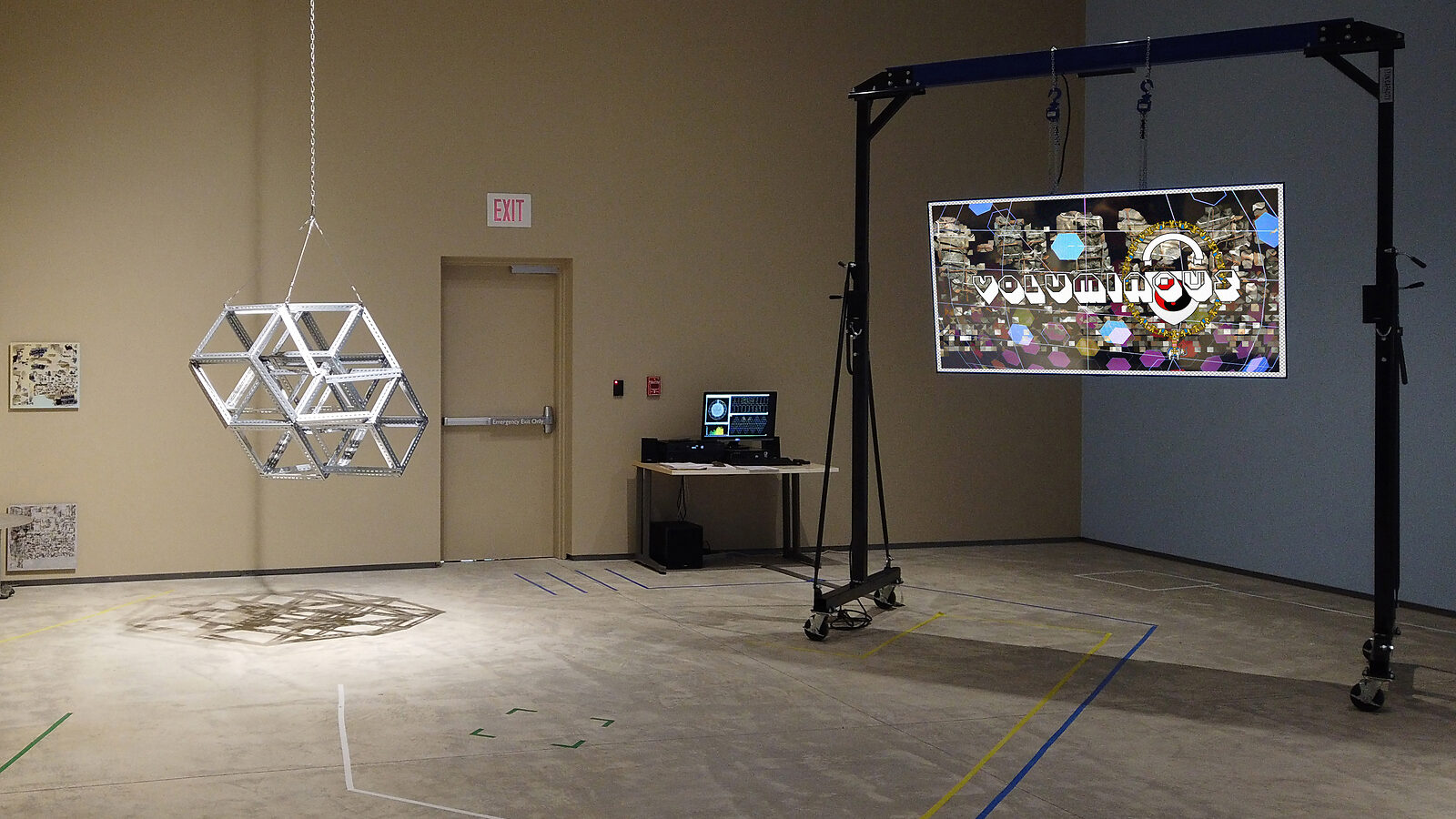 About 1.8 billion years ago, a meteorite tore through part of what is now Ontario, leaving a scar greater than 20 miles in diameter that bled precious metals like copper and nickel into the exposed earth. In 1901, European colonists began to carve away the layers of rock, eventually digging one of the deepest mines on the planet, Creighton Mine.

In 1990, scientists used the mine as a natural shield to protect SNO, an experiment studying the behavior of strange particles called neutrinos. In 2015, the results of the SNO experiment would earn Canadian scientist Art McDonald a portion of the Nobel Prize in Physics.

A part of Creighton Mine has since been developed into an underground laboratory, SNOLAB, where scientists continue to study neutrinos, along with other underground science pursuits. It’s also where, recently, four artists-in-residence accepted an invitation to come learn about dark matter.

The artists traveled to SNOLAB, in Sudbury, and to the Arthur B. McDonald Canadian Astroparticle Physics Research Institute, a seven-hour drive away in Kingston. They visited the laboratory and spent time with the physicists who build experiments there. They descended through layers of rock—and dug back through layers of history—to produce an exhibit that is about more than just physics.

In 2019, artists Anne Riley, Nadia Lichtig, Joséfa Ntjam and Jol Thoms began the residency that would result in the exhibition Drift: Art and Dark Matter. As they plummeted into the heart of the Creighton Mine via an industrial mining elevator, many of them had the same question: Why do we have to go so deep underground to try to interact with particles coming from space?

It seems poetic. But the answer isn’t poetry—it’s science. The more than a mile of dense norite rock the lab is buried beneath filters out a constant shower of cosmic radiation from above. In a detector on the surface, that radiation would drown out rare signals from neutrinos and possibly dark matter. Particles such as these, which are loath to interact with other matter, are much more likely than their compatriots to pass through the layers of rock and earth and make it to detectors located underground.

Physicists know that neutrinos interact with other matter. As for dark matter—it has never been detected directly, though indirect signs point to it outweighing known types of matter 5-to-1. It may be all around; we just can’t see it.

Thoms has spent time with physicists searching for hard-to-find particles in other extreme locations, including Laboratori Nazionali del Gran Sasso under Gran Sasso mountain in Italy and the Baikal Deep Underwater Neutrino Telescope in Siberia. He says he enjoys these “landscape laboratories,” which he describes as “meaningful infrastructures” embedded in lakes, ice shelves, mountains and mines.

Ntjam admits she struggled with the physics concepts that scientists introduced during the residency at SNOLAB and the McDonald Institute. “Every night I read about dark matter when I was in Canada,” she says. “I read every note I took during the day and tried to be a good student.”

But still, she says, it took nearly the full two weeks of the residency for things to start clicking.

One concept that finally resonated was Heisenberg’s Uncertainty Principle: the idea that you can calculate the velocity of a particle, or its position, but never both.

Thoms spent the residency thinking about layers as well.

For part of the exhibit, he created a video. Called n-Land: the holographic (principle), it features 3D scans of SNOLAB that have been flattened and then layered back on themselves, an artistic nod to the “many-worlds” hypothesis in quantum mechanics that posits that every possible reality simultaneously exists.

One layer takes the viewer back to 1850, when the Robinson-Huron Treaty granted the British Crown access to land and resources, including those in the area that is now Sudbury, belonging to the people of the Anishinabek Nations. The treaty promised the Anishinaabe peoples an annual share of revenues generated as compensation, with an augmentation clause to account for economic growth over time. Twenty-one First Nations tribes are currently involved in a lawsuit against the federal and provincial governments regarding these payments, which, despite the terms of the treaty, have not increased since 1874—before Creighton Mine even opened. 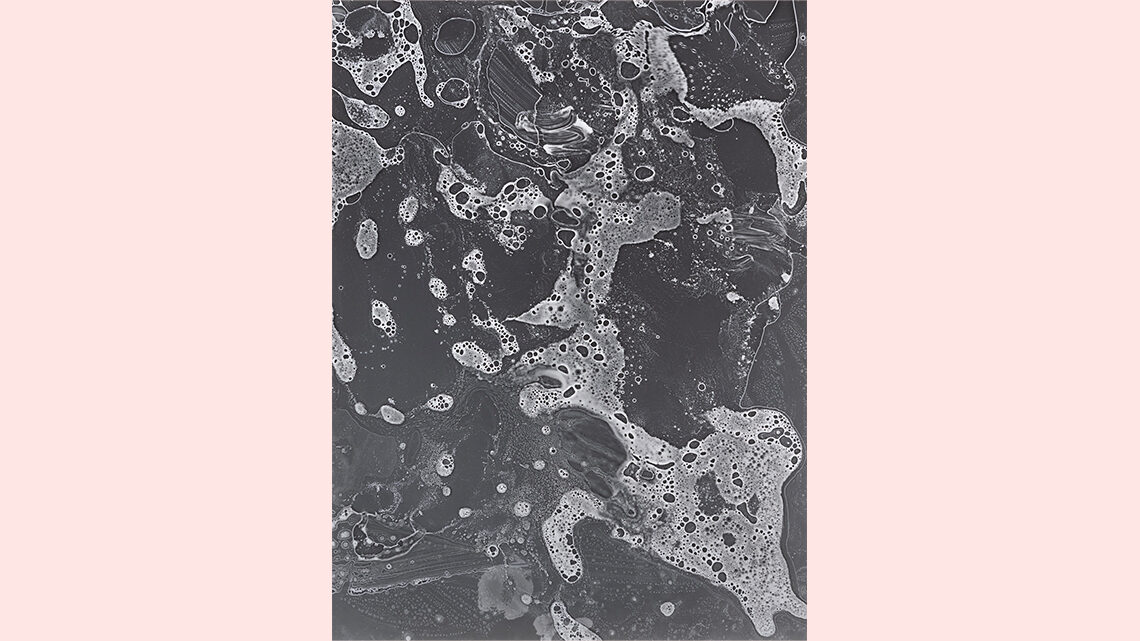 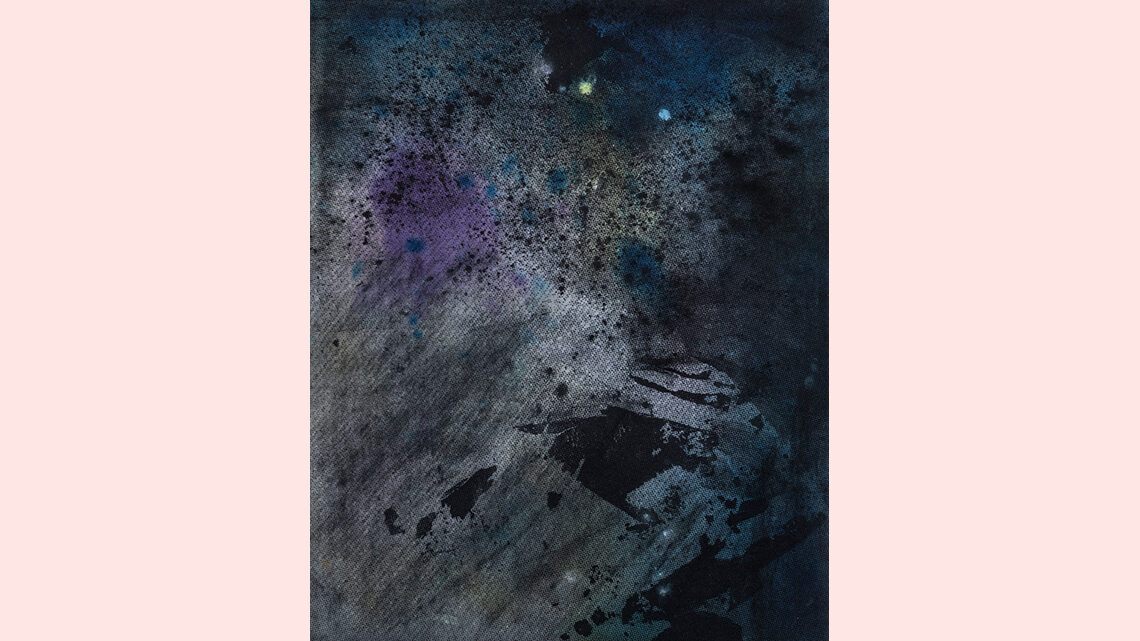 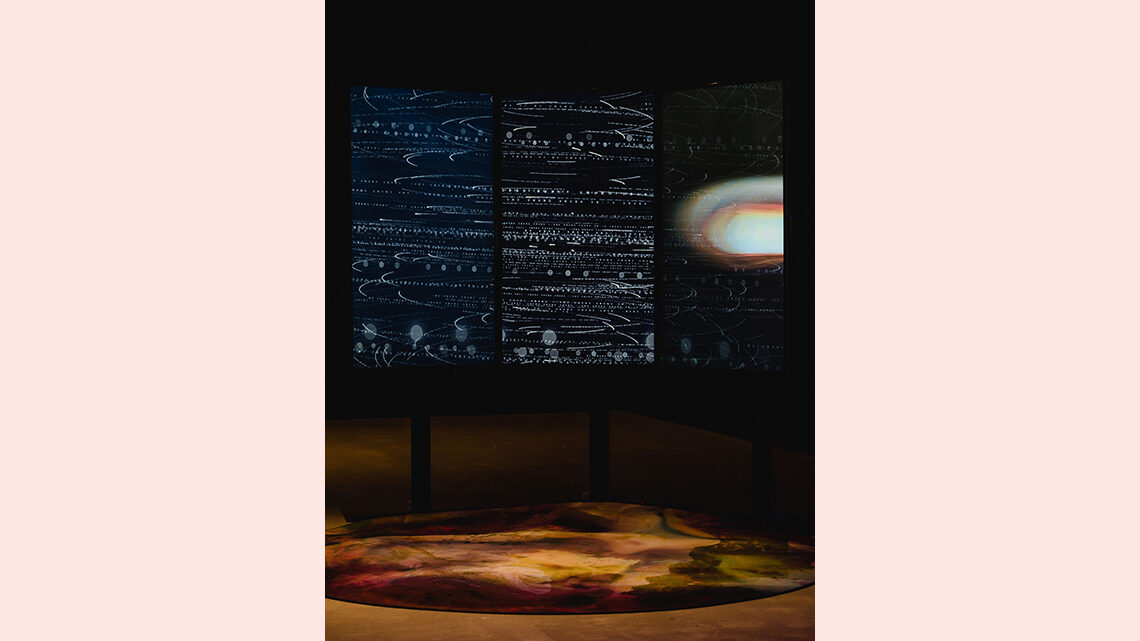 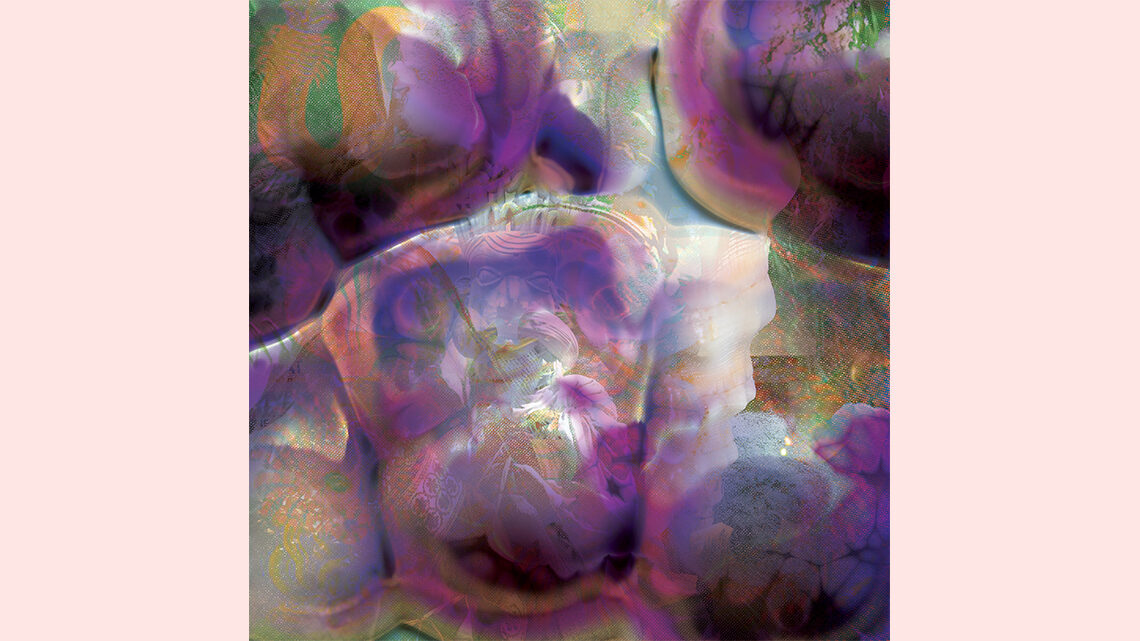 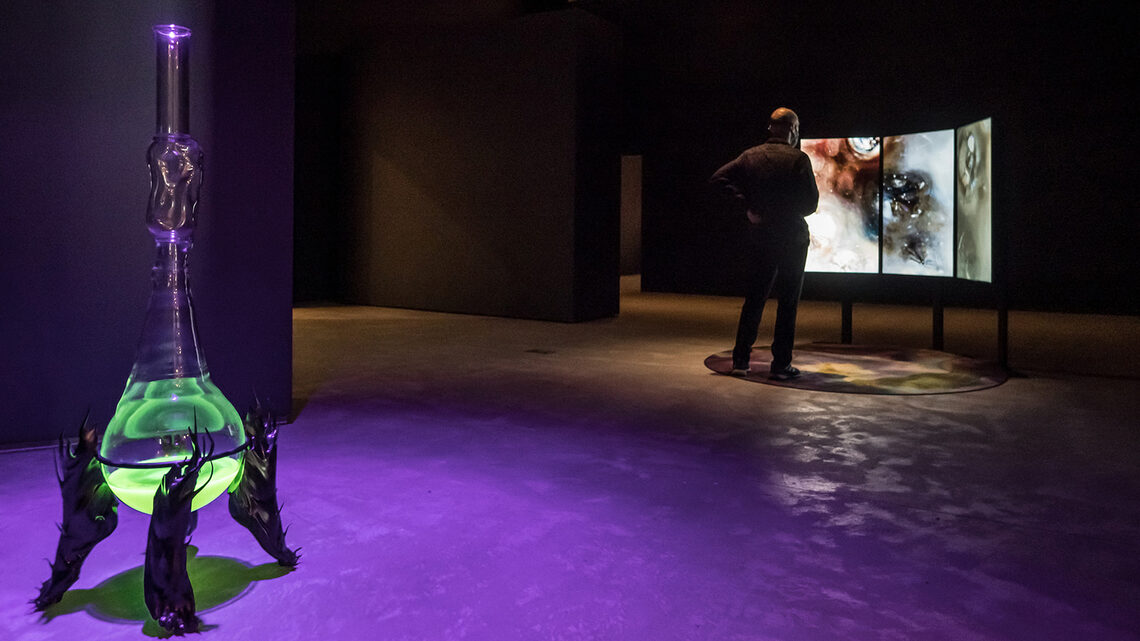 Photo by Tim Forbes
Previous Next

Lichtig says the artists were allowed to think beyond the physics thanks to the flexibility of the Drift residency. “I thought it was very open-minded and really experimental—and gave enough freedom to the artists to imagine something new.”

Lichtig was inspired to create her piece Dust after hearing Nobel Laureate McDonald share a fact made popular by astronomer Carl Sagan—that we are all made of stardust. The idea of stardust stuck in Lichtig’s mind long after she returned to her home studio in southern France.

She also spent time thinking about the everyday kind of dust, which, just like cosmic radiation, can interfere with the detectors underground and has to be eliminated. Scientists take several measures to keep both dirt from the mine and other particulates from making their way into the experimental areas of the laboratory. The name Drift comes from the name of the long, rocky underground tunnel that leads researchers from the dusty entrance of the mine to SNOLAB’s immaculate underground cleanroom. Lichtig says it was a memorable experience “to go through stone and to be in the middle of stone—and then suddenly to switch into this ultra-technological world where everything is completely dust-free.”

To make Dust, Lichtig applied dust to photo-sensitive paper and then added different cleaning agents, capturing snapshots of their interactions.

But Lichtig’s second piece in the exhibit, Untitled, was the one that most stood out to SNOLAB physicist Erica Caden. Caden participated in a pair of sessions led by Elvira Hufschmid, a doctoral fellow at Agnes Etherington Art Centre, to introduce physicists to the works in Drift.

“To me, [Untitled] looks like a blackboard that was being erased and rewritten,” Caden says. “And that led to the thought of how science is a constantly evolving process, and how we think we know things and we're traveling down this one road with our theories and our experiments—and then our results tell us, ‘Nope, what we got was not what we expected.’ So we have to start over.”

Untitled, a collection of black panels with mysterious, chalky markings, does not necessarily represent the ephemeral nature of physicists’ calculations. To others, it might look like images of the night sky. Caden says she was surprised by how differently her fellow scientists interpreted the same piece of artwork. Caden says the exhibition is a good chance for SNOLAB scientists to step back and see how other people understand the work they are doing as well.

Drift was developed by SNOLAB, the McDonald Institute, and the Agnes Etherington Art Centre at Queen’s University. The exhibit will be at the Agnes until May 30, after which it will go on tour through Canada for three years. The art is also available in an interactive version of the exhibit online.

During her time in Sudbury, Ntjam visited the planetarium at the Science North interactive science center. She remembers watching a video presentation there about how the Indigenous people in the area mapped the night sky. Indigenous constellations are different from the classical Greek ones Ntjam learned as a child.

Like descending into the depths of the Earth to study particles from the sky, or recruiting artists to examine concepts in physics, studying a new set of constellations can help us better understand the ones we already know.

“In fact, they’re the same stars in the sky,” Ntjam says. “We are just connecting the dots differently.”