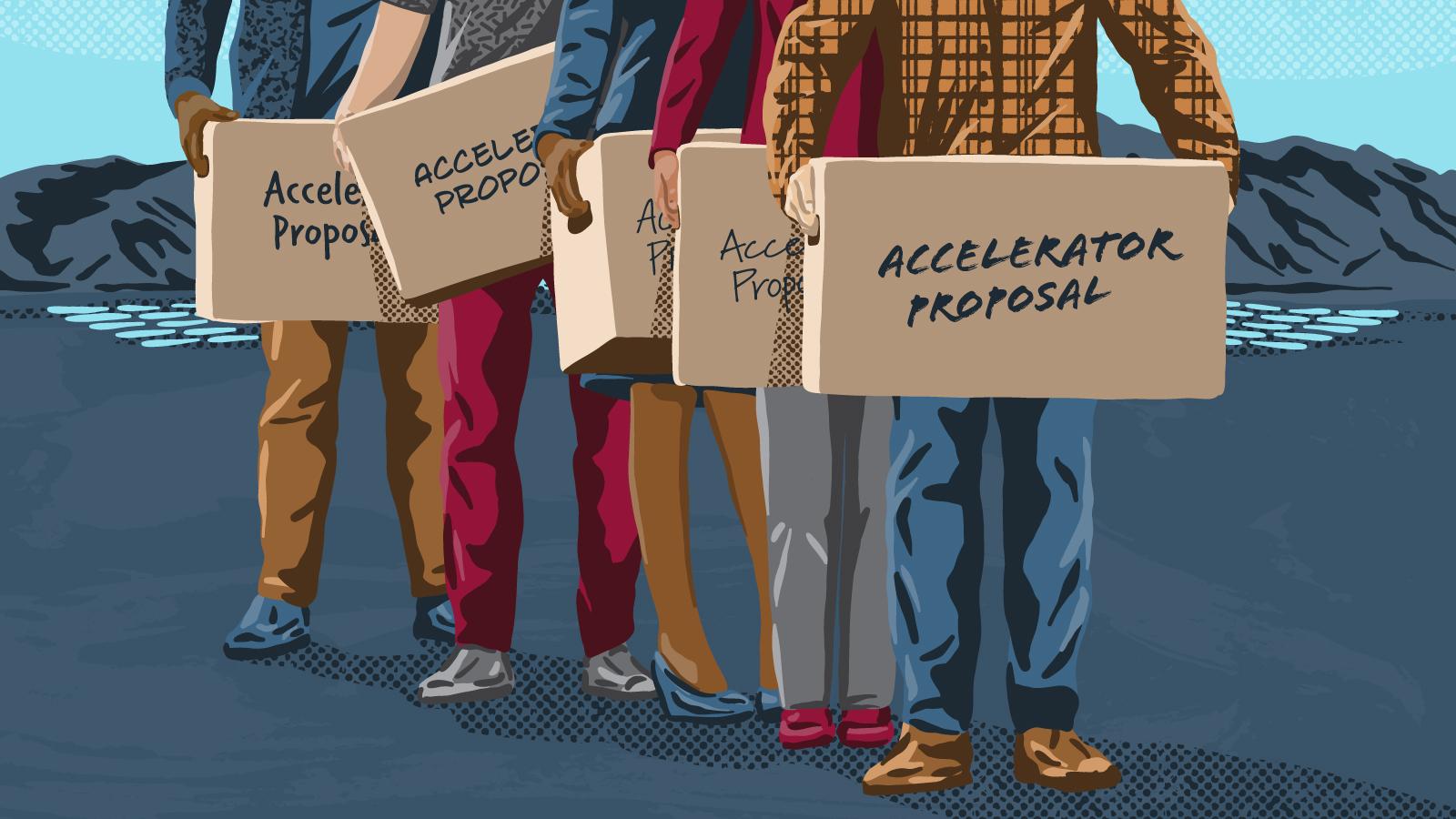 The construction of a large-scale particle accelerator like the Large Hadron Collider at CERN requires a staggering investment of time, resources, and labor. To make the best use of its efforts in this and other areas of study, the particle physics community organizes recurring regional planning exercises. These discussions help the community align on research priorities in areas like neutrino, cosmic and accelerator physics.

The group tasked with evaluating proposals for new accelerator facilities as part of the recent US planning process was the Accelerator Frontier Implementation Task Force, or ITF. In July, the task force published a preliminary report emphasizing the need for R&D to reduce the cost and energy consumption of the world’s next big particle accelerator project.

“There’s the question about, what is the next big thing? Where is the next really exciting physics out there?”

The Accelerator Frontier ITF evaluated 24 competing proposals for new accelerator facilities, many of them aiming to achieve greater power, increased energy efficiency, or a more compact design than their predecessors—or some combination of the three. Accelerator physicist and ITF member Marlene Turner says that’s a lot of proposals for the field, especially since she expects only one or two will ever be built, if any.

For Turner, this discrepancy underscores the importance of the planning process.

“If you’re only going to build one big facility, or let’s say two, you really want to make sure that what you’re going for is the best possible thing,” Turner says. “Any project that you start is kind of a heavy, long-term investment.”

Turner says one reason there’s so much accelerator R&D happening in the community today is the simple fact that facility construction of the last major accelerator project, the LHC, was completed more than a decade ago. “There’s the question about, what is the next big thing? Where is the next really exciting physics out there?”

Particle accelerators have a long history of facilitating groundbreaking physics discoveries. In the late ’60s and early ’70s, accelerator experiments at SLAC National Accelerator Laboratory provided the first evidence for the existence of quarks, which are fundamental particles—i.e., particles that are not composed of other, smaller particles. Most recently, the LHC enabled the discovery of the Higgs boson.

Why do researchers believe higher energies could produce new, even heavier particles? Their logic is based in one of the best known scientific equations in the history of modern science: “Einstein’s famous formula, E=mc2, says that you can make matter out of energy, and that’s what particle colliders do—they kind of apply the energy, and they hope that you can produce the matter,” Turner says.

Accelerators that can achieve even higher energies than the LHC could lead to our first observations of hypothetical particles like dark matter, or produce even more exotic material that has yet to enter the realm of theoretical physics. “We’re just putting as much energy as we can on the table and hope to get something that we didn't expect,” Turner says.

Achieving energies beyond the 6.8 trillion electronvolts per beam world record the LHC set in 2022 will require major strides in accelerator R&D. “It’s pushing every single limit of the technology,” Turner says. “Say you give me infinite money, but you want a 10+ TeV machine.” Turner explained that we simply would not know how to build such a machine, at least not at this point in time.

The quest to achieve higher and higher energies and other performance improvements may ultimately be at odds with the conclusions of this year’s ITF report, which emphasizes the importance of R&D centered on reducing cost and energy consumption. ITF chair Thomas Roser notes that these conclusions represent a marked departure from previous planning cycles.

“In the past, a lot of the R&D went into performance, to get high luminosity, how do you reach the high energies, all that,” Roser says. “But the cost has now become so big that it's not clear that society as a whole can afford to do this. Also energy consumption—energy consumption has become in my mind a critical deciding factor as to whether we can ever build another collider.”

For Roser, the mammoth cost and energy requirements of major accelerator projects are not merely political or logistical obstacles, somehow separate from the science of particle physics. Instead, he views them as a core consideration of accelerator R&D itself. “I am concerned that these machines are getting out of the reach of what society will tolerate if we don’t move aggressively, and with the same priority as performance R&D, towards sustainable operations,” he says.

The 24 accelerator proposals evaluated by the ITF vary widely in terms of approach and technical maturity. Some projects, like the International Linear Collider, have been under design development for decades. Others represent newer concepts that could require more than a quarter century of further R&D.

The ILC provides a useful counterpoint to some of the other accelerator proposals evaluated by the ITF. “ILC is shovel ready, and if you give us the money, we’re going to build it,” Turner says.

The idea of the ILC has been around so long, it has become the baseline design for other proposed Higgs factory accelerators. At the same time, funding issues have left the project stalled for years—another reason the physics community has generated so much new accelerator R&D.

One alternative to the ILC is the Cool Copper Collider, a linear collider that would replace the traditional accelerating structure of the ILC with cryo-cooled copper, enabling faster beam acceleration and, as a result, a more compact machine. Achieving this would allow the CCC to be less than half the size of the ILC while delivering similar performance.

Another alternative is the Recycling Linear Collider, or ReLiC, an example of an “energy recovery” concept, in which energy and particles generated by the accelerator would be captured and reused for greater energy efficiency.

Smaller or more energy-efficient colliders may seem like a clear solution to Roser’s energy and cost concerns, but those concepts have their own disadvantages. “The drawback…is the technology is not ready for that,” Roser says.

In general, the most technically ambitious proposals require the greatest amount of additional R&D, Roser says. And in many cases, they will incur the greatest costs.

To Turner, ambitious proposals like the ReLiC, as well as other proposals from the ITF evaluation like muon- and plasma-based colliders, underscore the usefulness of accelerator R&D.

“We’re pushing every possible boundary of technology,” she says. “If you develop better magnets, that’s great for colliders, but it’s also great for industry, for medical applications, for industrial purposes. Touch screens were developed back at CERN for one of their machines. The World Wide Web, also an invention of CERN.”

Oide suggests that while appreciating these spin-offs, we shouldn’t underestimate the value of scientific discovery. “Many discoveries in particle physics were done by accelerators—not all, but many,” he says. “Many, many, many physics discoveries need new accelerators."

For Roser, it all comes back to energy consumption. “The right way to approach accelerator R&D is building the machines that are much more efficient in energy usage so that you can get the high-performance machine, but it doesn't use huge amounts of energy,” he says.