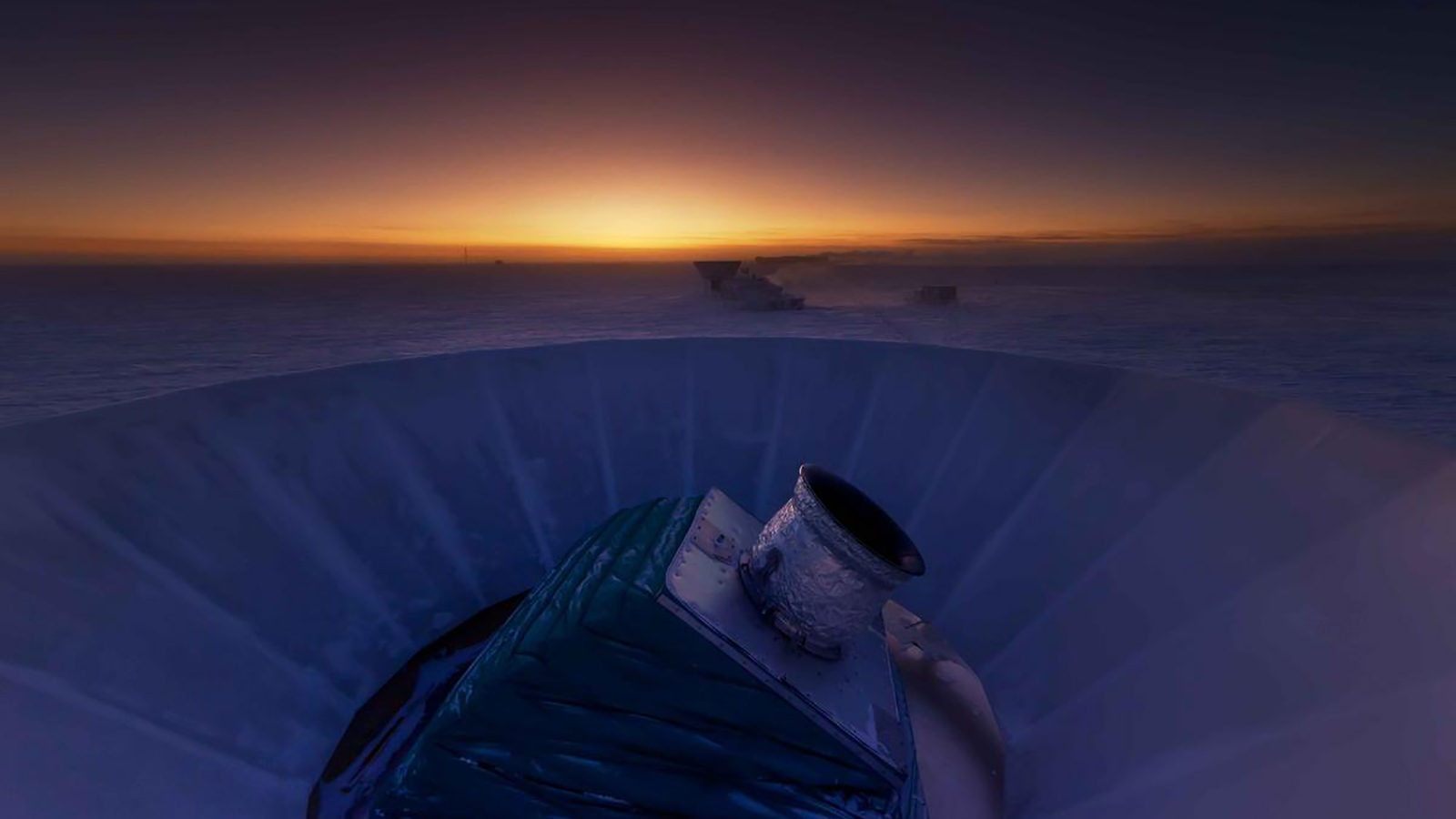 Dusting for the fingerprint of inflation with BICEP3

A new experiment at the South Pole picks up where BICEP2 left off.

When researchers with the BICEP2 experiment announced they had seen the first strong evidence for cosmic inflation, it was front-page news around the world. Inflation is the extremely rapid expansion of space-time during its first split second of existence, proposed to explain a number of puzzling properties of the universe, making the BICEP2 results a really big deal. Over the following months, though, the excitement evaporated: After combining their data with other experiments, the BICEP2 team showed that most or all of the signal attributed to inflation was likely produced by galactic dust inside the Milky Way.

But traces of inflation could still be hiding in the data, and that’s why scientists haven’t given up yet. BICEP3, the upgraded version of BICEP2, began collecting data yesterday. The first observations using the fully updated equipment will run through November.

The updated equipment involves many more detectors and ultimately many more pixels. Even more importantly, BICEP3 and its partner experiment, the Keck Array, cover a wider spectrum of light in hopes of teasing out the hidden signal of inflation from the choking dust around it.

“The thought was to put together something that's at least 10 times as powerful as BICEP2 in a single instrument,” says Zeeshan Ahmed, a Panofsky Fellow at the Department of Energy's SLAC National Accelerator Laboratory. Ahmed oversaw the design and installation of BICEP3 and now coordinates the operation of the BICEP3/Keck Array assembly at the South Pole. And what are BICEP3’s chances of avoiding the problems its predecessor experiment faced?

State of the universe

The BICEP (once an acronym, but now a stand-alone name) project is one of many observatories designed to measure the properties of light left over from the first 380,000 years of history after the big bang. That light is the cosmic microwave background (CMB), and it serves as a state-of-the-universe report from a time before there were any stars or galaxies.

In particular, if inflation happened immediately after the big bang, it would have produced turbulence in the structure of space-time itself—gravitational waves like the kind LIGO detected recently. While these waves would be too weak for LIGO to see, they would twist the orientation of the light, which is known as polarization. (Glare from wet pavement is also polarized light, which is why many sunglasses involve polarizing filters.)

The amount of polarization from gravitational waves is very small, and its nature makes it hard to measure. However, polarization can still tell us a lot about the initial conditions of the cosmos, says Licia Verde of the University of Barcelona. Verde is a member of the Cosmic Origins Explorer (COrE) project, a proposed space-based mission from the European Space Agency to measure CMB polarization.

“That would be a way —possibly the only way—to ‘see’ all the way to the birth of the universe,” she says.

Other CMB observatories such as the Planck or WMAP satellites can measure polarization over narrow fields of view, but BICEP is designed with a wide-field view to look where the inflation signal might be dominant. The BICEP2 iteration of the project found a surprisingly strong polarization signal, but subsequent analysis of Planck data showed that galactic dust, made of large molecules not terribly different from the type underneath our beds, also polarizes light and can mimic gravitational wave effects.

“Almost all if not all of the BICEP2 signal can be attributed to dust,” Ahmed says. But not all is lost.

“It turns out the more [wavelengths] you have, the better you can disentangle the CMB signal from the dust signal.”

BICEP is a moderately sized telescope as these things go, about 8 feet tall and 2.5 feet in diameter, weighing in around three-quarters of a ton. The newest version of the camera has 20 tiles made of 64 pixels each, 1280 pixels total compared BICEP2’s 256. While that’s a lot fewer than you’d find in an ordinary digital camera, these pixels record microwave light. Those wavelengths are longer than visible light and need larger pixels.

BICEP3’s pixels are also tuned to a different wavelength of microwave light than that used by BICEP2.

Meanwhile, the Keck Array is effectively five copies of BICEP2 mounted together in one telescope and operating at two complementary wavelengths. Together, these instruments should be able to characterize the dust obscuring any possible signal from the CMB.

Walt Ogburn is a Stanford physicist who works on BICEP3 operations at the South Pole during the Antarctic summer. He says the process of getting BICEP3 and the Keck Array running “has succeeded beyond expectations.”

Verde (who is not involved with the project) notes that the whole experiment is “a high-risk, high-gain pursuit”: There is a possibility that there is nothing to see at all if inflation didn’t happen or if the polarization from gravitational waves is too small.

On the other hand, observations by Planck and the Keck Array offer a glimmer of hope that BICEP3 will succeed if there’s anything to see. The type of dust in the Milky Way that BICEP2 saw appears to be simple, meaning that it polarizes light in some wavelengths more than others in a predictable way. The polarization from gravitational waves could peek out in wavelengths where the dust is less pronounced. Only by scanning across a range of wavelengths can researchers find the exact behavior of galactic dust across the microwave spectrum, in hopes of subtracting it away. Once that is done properly, what’s left may be gravitational waves from inflation.