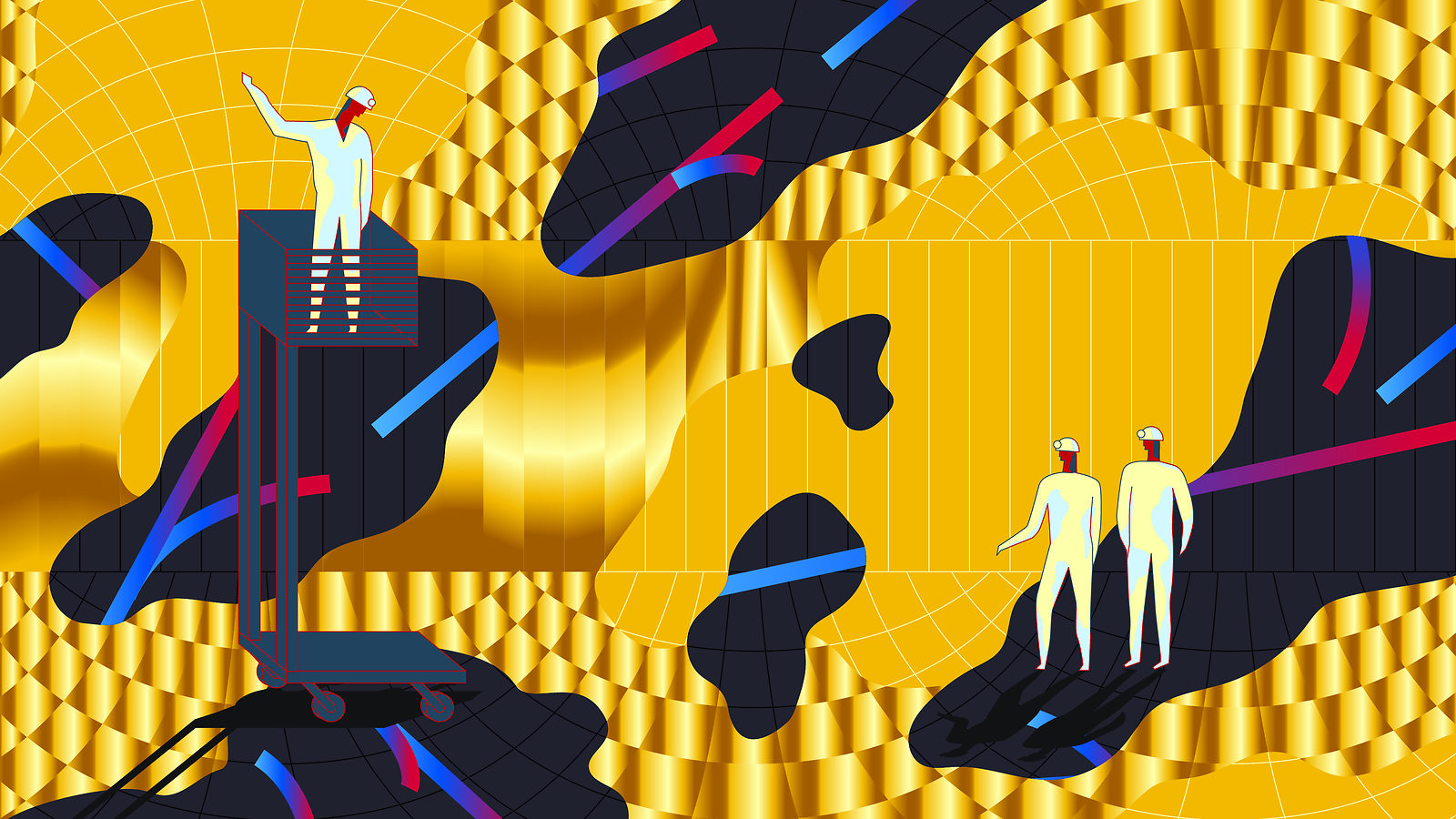 Advances in subatomic physics heavily depend on ingenuity and technology. And when it comes to discovering the nature of some of the most elusive particles in the universe, neutrinos, scientists need the best and most sensitive detector technology possible.

Scientists working at CERN have started tests of a new neutrino detector prototype, using a very promising technology known as dual phase—so called because it uses both the liquid and gas forms of argon.

“This is a new approach, which has started in a very positive way, with great expectations in front of us,” says Marzio Nessi, head of the CERN Neutrino Platform.

If successful, this new technology will be used in addition to the single-phase technology in the much larger detector modules for the international Deep Underground Neutrino Experiment, hosted by the U.S Department of Energy’s Fermilab.

Images of particle tracks recorded by the DUNE team in the last few weeks demonstrate the potential of this new method. 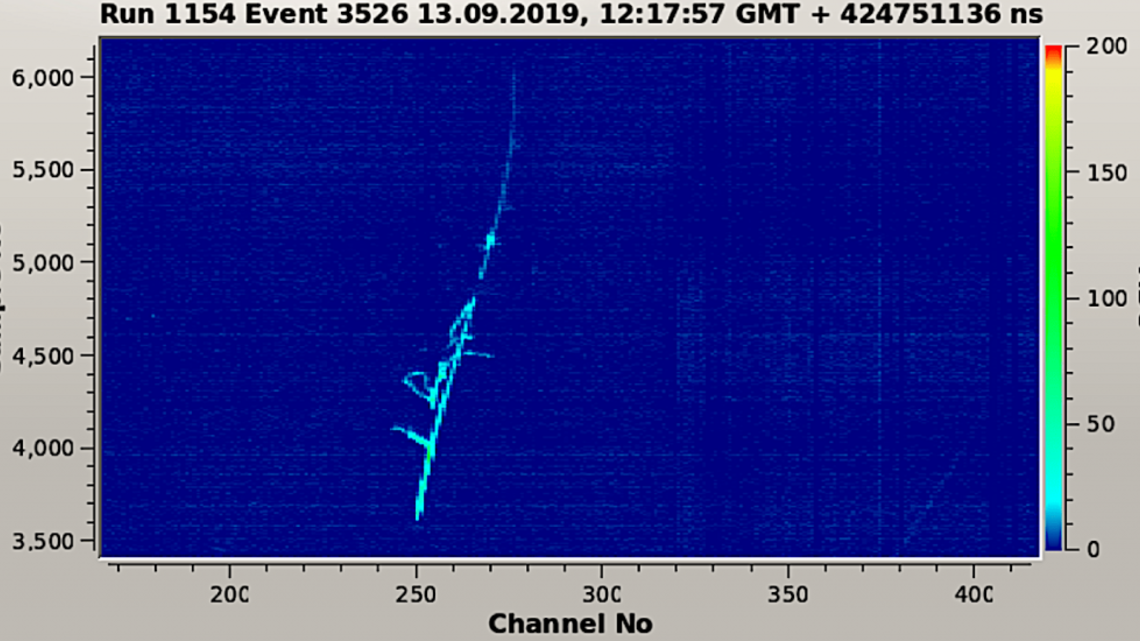 “We are delighted to see this detector technology taking data at this scale after many years of R&D,” says Dario Autiero of CNRS, the French National Center for Scientific Research, and co-coordinator of the dual-phase work at CERN. “This achievement couldn’t have been possible without the long-standing dedication of the involved groups for several years.”

DUNE scientists began operating the dual-phase prototype detector at CERN at the end of August. Filled with 800 tons of argon, the prototype is a bit smaller than a standard three-story house.

Even with its massive size, the dual-phase ProtoDUNE detector is only a small version of the four detector modules that the international DUNE collaboration plans to build in the United States over the next decade. Each full-size DUNE detector module will be 20 times bigger than the dual-phase prototype. Scientists will use them to discover whether neutrinos could be the reason that matter dominates over antimatter in our universe.

“We also hope to catch the neutrinos from a supernova explosion in our galaxy in the DUNE detector,” says DUNE co-spokesperson Stefan Soldner-Rembold of the University of Manchester. “This will help us to understand the mechanism of these gigantic star explosions. The dual-phase technology will allow us to observe thousands of neutrinos within the 10-second burst of a galactic supernova, a once-in-a-lifetime event for most of us.”

Neutrinos are the most abundant matter particles in the universe, yet there is much left to discover about them. As you read this sentence, trillions of neutrinos are traveling through your body harmlessly, without leaving a trace. About once or twice during your entire lifetime, a neutrino will collide with an atom inside your body and create for a fraction of a second new particles that reveal the neutrino’s interaction—and you won’t notice a thing.

A sophisticated particle detector filled with a transparent liquid such as argon, however, can record the “tracks” of these new particles for study. Argon is one of the noble elements of the periodic table. Argon atoms are much larger than the atoms found in most other transparent liquids, including water, oil or helium, all of which have been used in neutrino detectors. The advantage of argon atoms: They present a much bigger target for a neutrino travelling through the liquid, making an interaction more likely.

Neutrino detectors known as liquid-argon time projection chambers have been in development for more than 30 years. The first large detector, named ICARUS, was built at the INFN Gran Sasso national laboratory in Italy, and featured 760 tons of liquid argon. More recently, Fermilab has built and operated a smaller liquid-argon detector called MicroBooNE, and is preparing to start operating the refurbished ICARUS detector, now in its new home in Illinois.

Those detectors and their successors have relied on the single-phase technology. In this method, the particle detector is filled entirely with liquid argon. Wire planes and photo sensors submerged in the liquid record the faint signals caused when a neutrino smashes into an argon atom. The DUNE collaboration successfully began operating a large single-phase prototype detector at CERN in September 2018.

The new dual-phase technology would be used in addition to the single-phase detectors. It uses liquid argon as target material and a layer of gaseous argon above the liquid to amplify faint particle signals before they arrive at sensors located at the top of the detector, inside the argon gas. Compared to the single-phase technology, this setup could yield stronger signals, which makes them stand out from background noise. It would thus enable scientists to look for lower-energy neutrino interactions. It could be a game-changer, as it would significantly amplify the faint signals that particles create when moving through the detector.

Another advantage of the dual-phase technology: All the electronics for the data collection are located in the gas layer near the top of the detector and can be accessed via special chimneys that open from the outside, even as most of the detector is filled with argon kept at a temperature below minus 184 degrees Celsius (minus 300 degrees Fahrenheit).

In the dual-phase technology, electrons drift vertically, toward the top of the detector until reaching the active anode in the gas layer above the liquid. In contrast to the single-phase technology, the detector features a single active volume with no detector components in the middle of the liquid argon and a reduced number of readout elements at the top. DUNE scientists are testing the dual-phase technology at CERN in a cube-shaped detector that is about 6 meters long in each direction, as big as the single-phase prototype located in the same hall. The collection of the electrons and readout of the signals is performed by innovative charge readout planes, each with a surface of 9 square meters, individually suspended a few millimiters above the liquid level.

“This is a very elegant design that requires advances in high-voltage technology and argon purity,” said Fermilab Director Nigel Lockyer.

The longer drift distances in the dual-phase detector require higher voltages that draw electrons to the sensors at the top. To build a full-size DUNE detector module with a drift height of 12 meters, scientists are planning to apply a voltage that may go from 300,000 up to 600,000 volts. More research and development will be necessary to achieve 600,000 volts.

DUNE plans to build four full-size detector modules based on argon technology. They will be located a mile underground at the Sanford Underground Research Facility in South Dakota. Preparations for the excavation of the large caverns that will house the four modules is underway.

The DUNE collaboration includes more than 1000 scientists and engineers from over 30 countries in five continents: Africa, Asia, Europe, North America and South America.