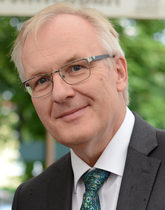 The next two years are pivotal for the Deep Underground Neutrino Experiment, the international particle physics experiment hosted by the US Department of Energy’s Fermi National Accelerator Laboratory.

In a vote earlier this month, the DUNE collaboration elected Stefan Soldner-Rembold, professor of particle physics at the University of Manchester, as its new co-spokesperson to help guide the experiment through these next two years. Soldner-Rembold has experience leading a large collaboration—he was co-spokesperson of the 500-member DZero experiment at Fermilab from 2009 to 2011—and has been working in neutrino physics for more than a decade.

Soldner-Rembold has served in several leadership positions within the DUNE collaboration, including chair of the Speakers Committee, and was elected as a member of the DUNE Executive Committee in 2016.

Two prototype detectors for DUNE are scheduled to be completed at CERN in Switzerland later this year, and technical design on the experiment’s full-size detector will be worked out over the next 18 months. The DUNE collaboration continues to grow—it currently includes more than 1,000 members from 31 countries—and continues to attract young minds from around the world, eager to contribute to this global-scale neutrino experiment.

“This is a formative period for DUNE,” Soldner-Rembold says. “What we decide now will shape the detectors and the way the collaboration works for the next 10 to 20 years. I’m thrilled to be stepping in as co-spokesperson during such an exciting time.”

It’s also a time in which the UK’s contributions to DUNE are ramping up. The UK has committed $88 million to the construction of the experiment (including the facility that will house it and the accelerator upgrades that will power it), and Soldner-Rembold is currently leading the UK-US consortium designing and constructing vital components of the DUNE detector. Prototypes of these components are currently being installed in the ProtoDUNE detectors under construction at CERN, another major partner in DUNE.

“To build the world’s best neutrino detector, we need to attract further international partners,” Soldner-Rembold says. “The election of an international co-spokesperson sends a signal to other countries that this is an interesting and exciting project that they should join and commit to.”

Over the next few years, Soldner-Rembold says, it will be important to continue to encourage young scientists to participate in DUNE.

“In order to create a vibrant and strong collaboration, we need to encourage the next generation of young physicists to be engaged with the project,” he says.

“I look forward to working closely with Stefan,” Blucher says. “His wealth of experience will prove invaluable as the DUNE collaboration navigates the exciting years ahead.”